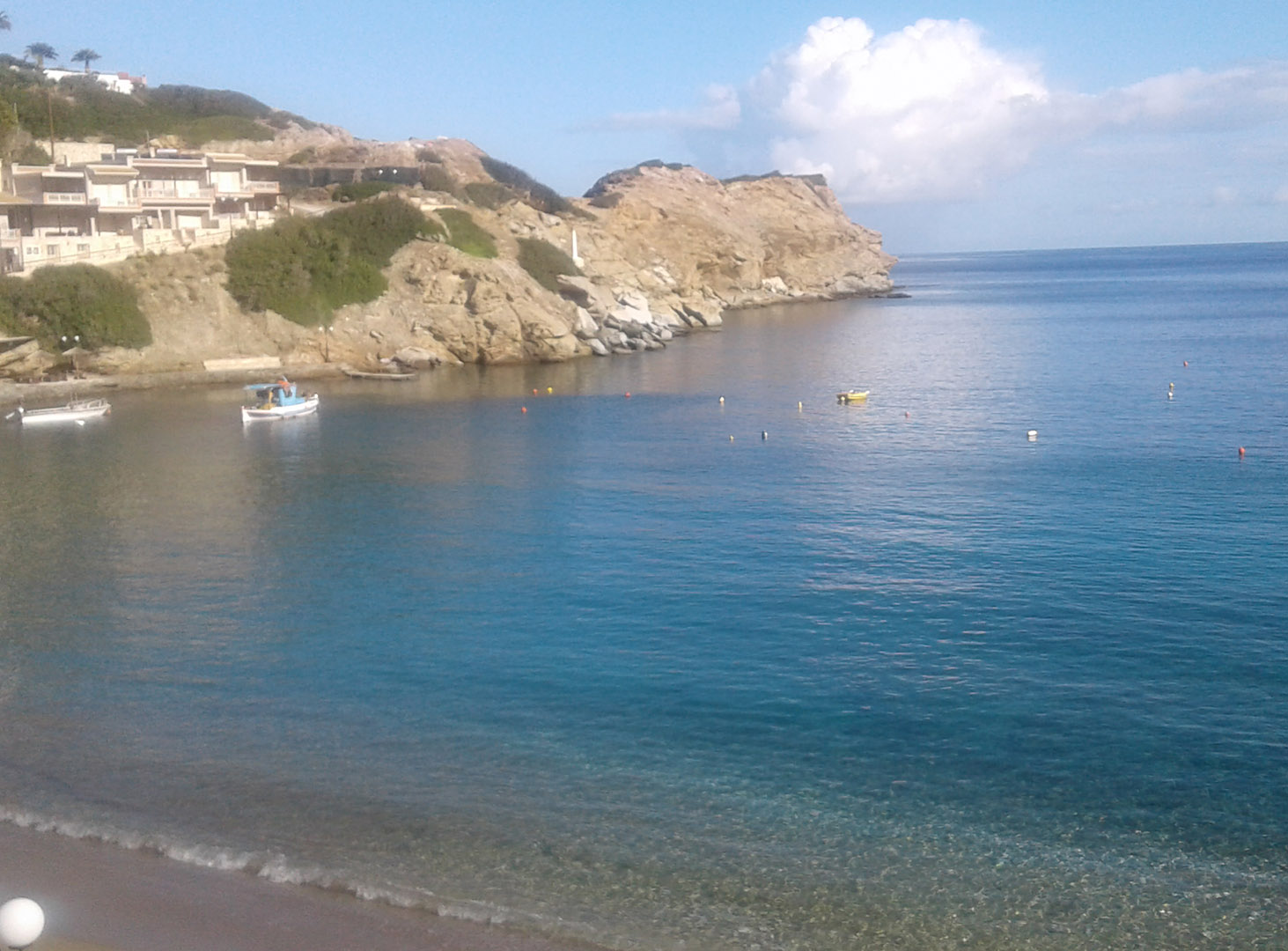 The first cockcrow by the Wild Pear Villa (in Agia Pelagia) you hear at 4.30 am. The sky is still dark. Below, Ligaria Bay and a ferry which is majestically sailing past to the mainland are shining with lights. Crickets are in no hurry to leave their violins and bows, but vocal sounds—chirping and whistling—begin to interweave in the night instrumental. Sparrows and tits in the outskirts of Moscow have long been silent saving their strength for the winter, but here the birds do not face cold, and hunger, so their singing is not depends on a season.

At 6.30 am the sky is brightening to a soft blue, a pigeon color. If you fail to fall asleep, you will see how it becoming more and whiter, “like white ink someone spilled milk…” By 7 am the top edge of the most magnificent cloud suddenly flashes with gold: the sun peeped out from behind the opposite mountains. Dog barking in the neighborhood is like an alarm clock: time to get up! The temperature behind the balcony door is plus 21 degrees Celsius…

Well, what about a cup of coffee and then to the sea?

A bit of autumn in Crete

Here, it is just like in summer, it smells of dry herbs, but in the evenings some bitterness is in the air from the smoke of bonfires. A bougainvillea falling off with its luxurious tassels looks like waking up after the summer heat, but the yellow leaves of figs on the stairs resemble traces of a barefoot parting summer. In the November palette of Crete has much more lemon-orange colors: lemons and tangerines are ripening. The sea is gentle and quiet, but the beaches are empty, and solely lonely fishermen are watching some November swimmers.

…In a tavern, my new acquaintance Elena, a Swedish woman, raises a toast: “Have a nice winter!” 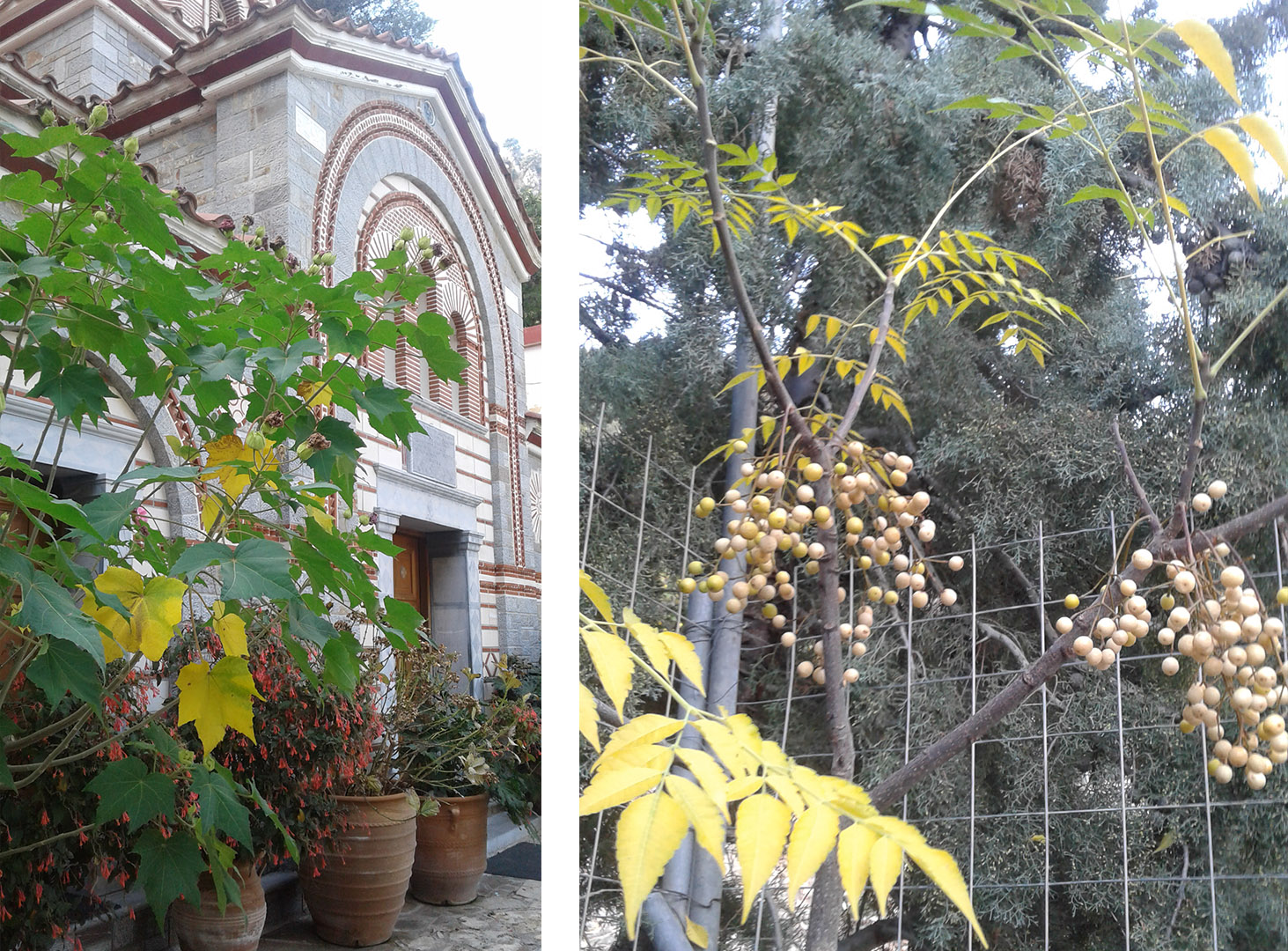 On the way to the Paliani Monastery, olive groves and vineyards are everywhere on the slopes of the mountains. It seems even that they are parceled like in an excellent student’s notebook: everything is regular, neat, well groomed. The soft word “paliani” (do accent on the last syllable) means “ancient”: the monastery is one of the oldest in Crete; and it is famous for its myrtle tree, inside which, according to tradition, is a Theotokos icon.

…A very long time ago a terrible fire happened in the local forest. Everything burned out, except for a trunk of one myrtle tree—and it was in it that the villagers found a surviving icon. They brought it to a temple, to its altar, but the next day the icon miraculously appeared again in its original place. This happened several times until people understood not to separate the myrtle and the icon. Young shoots appeared soon on the burnt trunk and closed the image from human eyes, but the revived tree got healing power. Around it gradually grew up the Paliani monastery, and the latter is long ago not a legend.

The wonderful myrtle—here it is, in the monastery courtyard. The trunk is hung around with small gifts from those who were healed of disease or received what they wanted. However, they say that the Mother of God helps only those who came here with pure heart and burning desire to change something in the life. But what if you are not sure of your thoughts’ purity or are afraid to open your heart? Do like we did it—look into a small cell to the left of the entrance. You don’t have to tell something. A genial old village woman, who looks just like your own grandmother, will look at you, take you by the hand, and… You will burst into tears. Because of something that did not come true, of need to be loved, of so long ago no one called you “my daughter”.

Mother Theofilakti does not speak Russian, but in the affectionate murmur of her Greek speech, something your own is heard: “Everything will be fine, I will pray for you, and you believe in it, sweetheart!” You will understand without words: you need to kneel so she read prayer over you. It’s hard for her to stand. When she hugs you finally, you really will believe that you are not alone, are good and in fact everything that you need will be fulfilled. 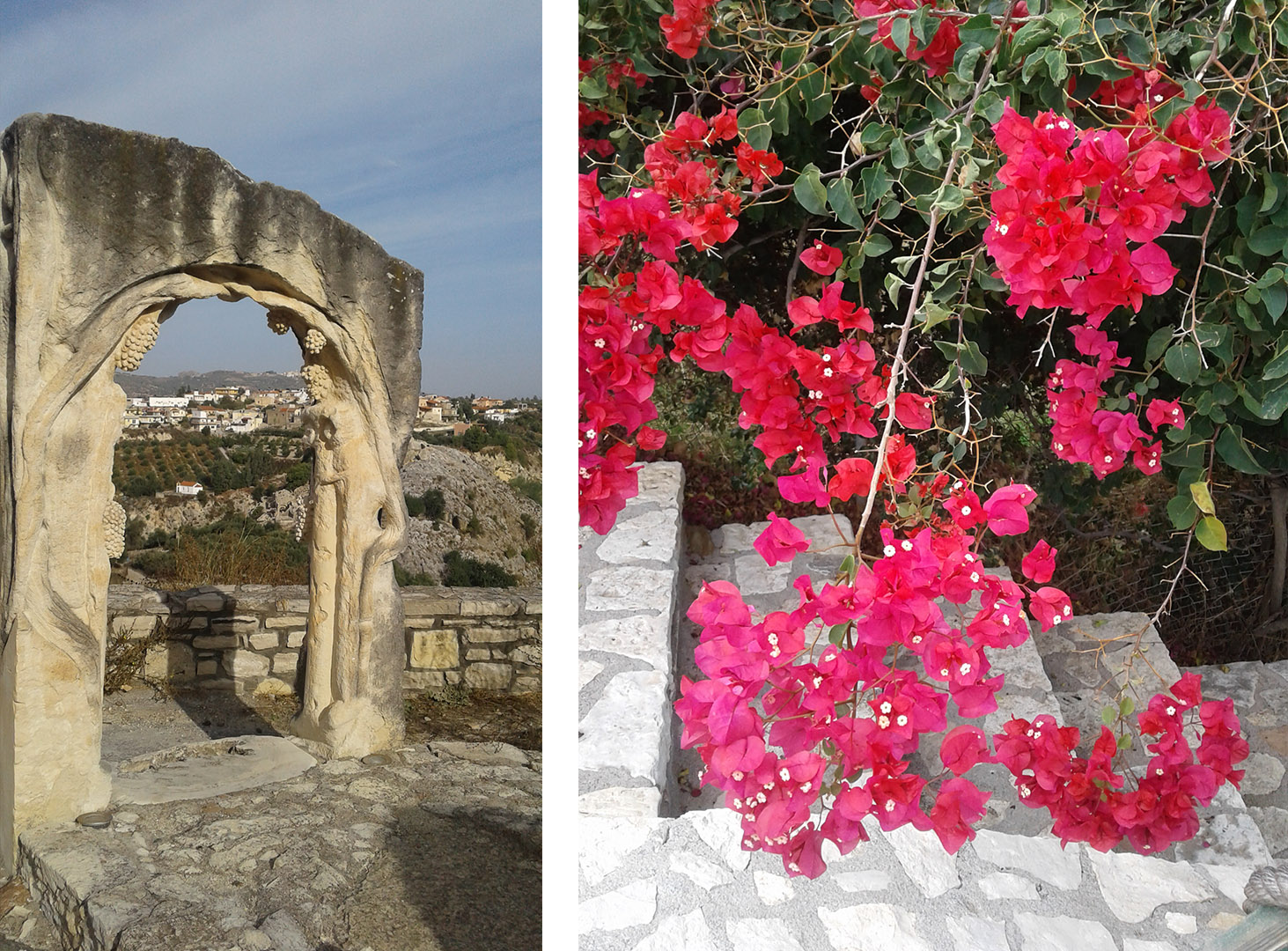 About the cave of St. Myronas (Agios Myron town, about 17 mi from Heraklion) we learned from our friend, the best guide in Crete (and not only there!), Stamatis Patelaros. He was baptized in a Church that is over the cave where Myron, a humble old man, lived as eremite in the III century.

The Cretans respected this meek and kind man who devoted himself to the service of God after the death of his wife; and they unanimously elected him, a simple priest, as bishop of Crete. And when he died (at the age of about 100 years), his remains were transferred to that very cave, and a temple was built above it. During his life, one of the hermitage walls began to be myrrh-streaming; and there still exists a life-giving spring to which pilgrims go. We came too, having walked and circled around the vineyards and olives for a while. We had seen enough of the local beauties, breathed so much and “flew” over the valley (Agios Myron is on the hills), that we did not come to Saint Myronas with requests but with gratitude: for this trip, for the warm stones of the temple, for the earth, so lovely and carefully groomed, and therefore generous. Our gratitude was much more due to the fact that his face in the small cave was very similar to the nice one of our Nikola the Wonderworker.

We didn’t drink from the source—just knelt down on the threshold of the cave and prayed as easily as the Greeks do; and it seemed to us that Saint Myronas did not condemn us at all for the joy with which we came to him. 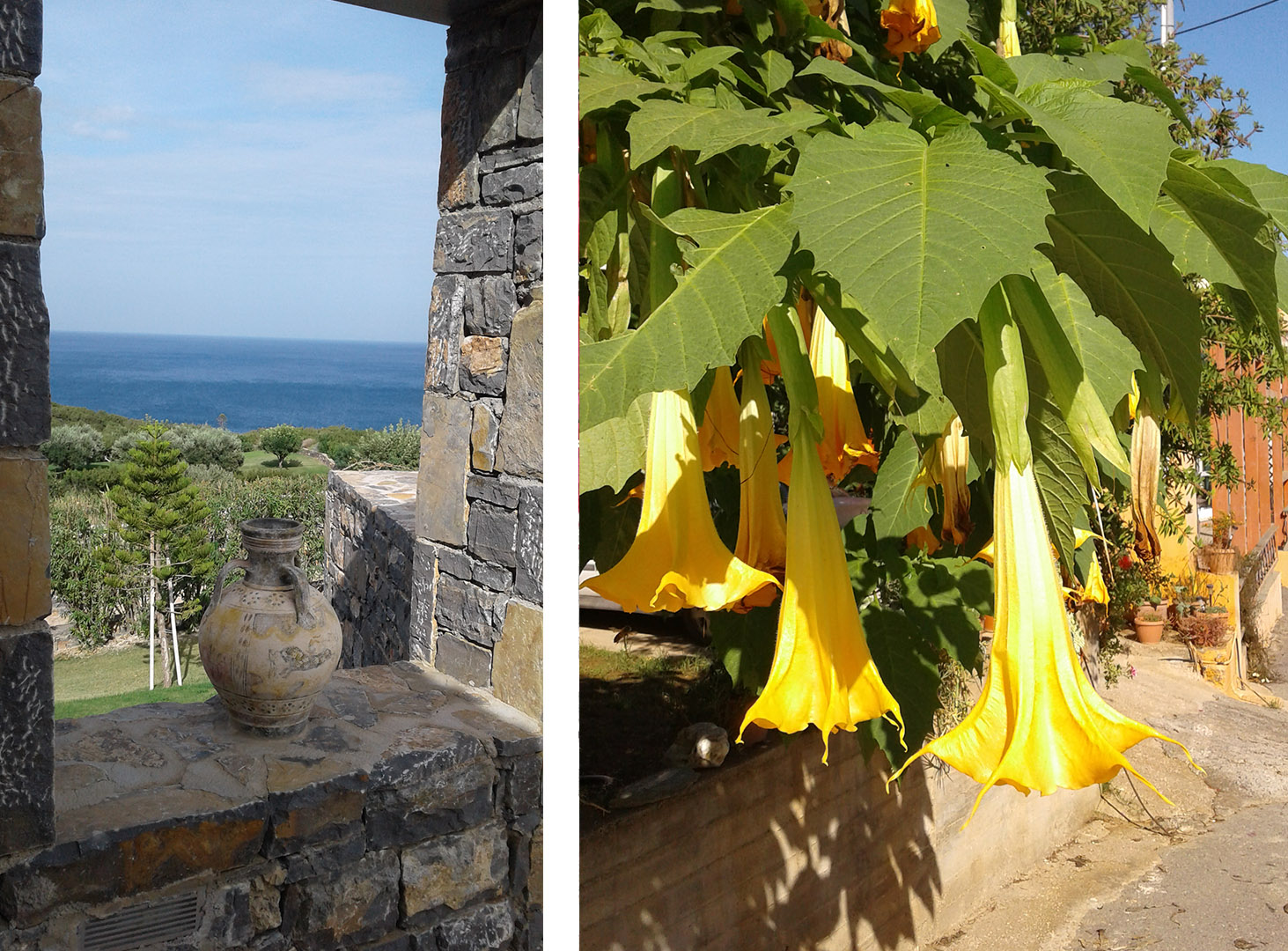 Our wonderful week in Crete is over. We hope you were not bored with reading our travel notes. It is wondering how good the beloved island is at any time of the year. Including in November, when the water in the sea is plus 22-23 degrees Celsius, the smells of grass turn your head like in summer; and the roads are promising adventures and meetings.