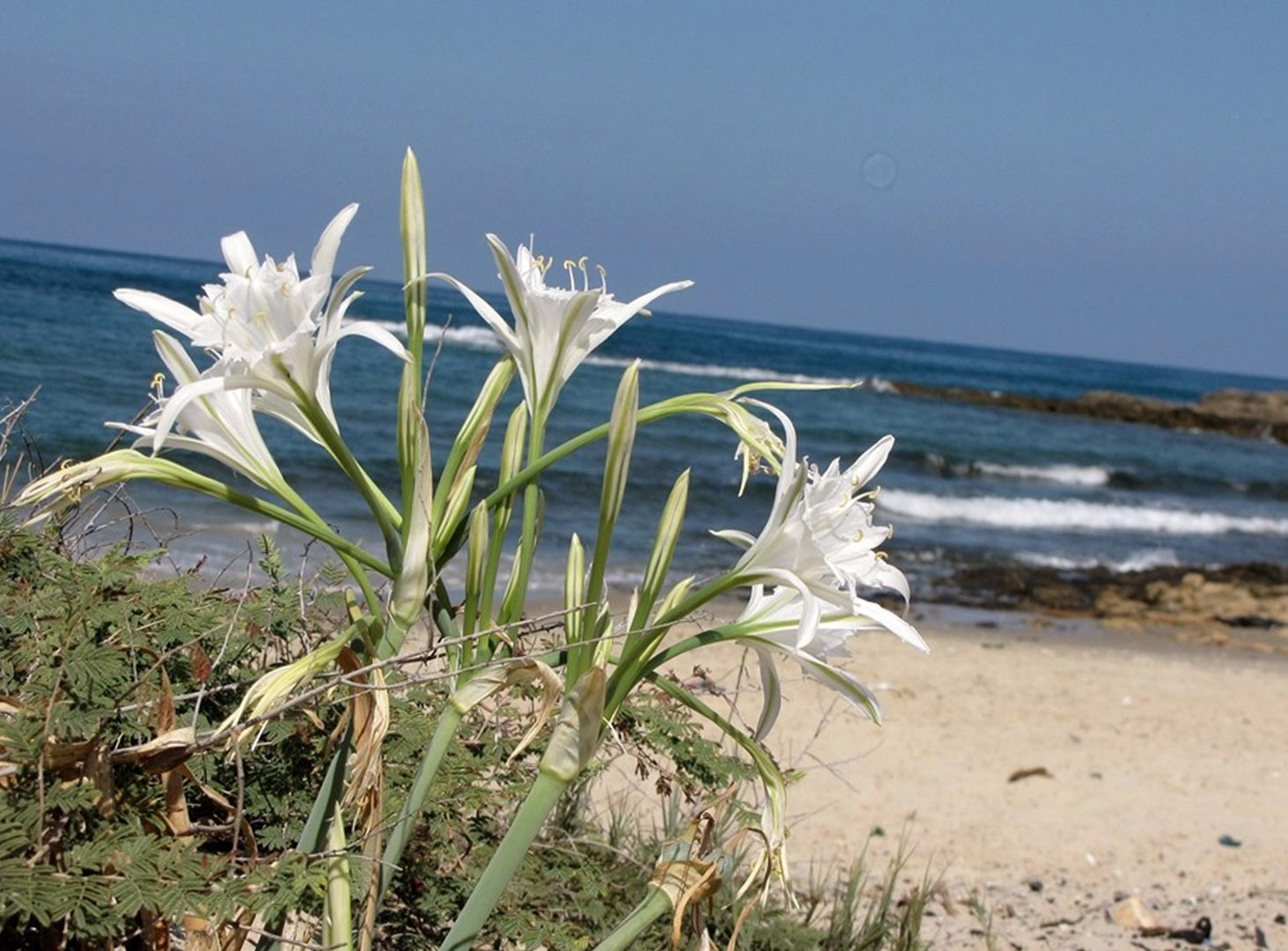 Winter has come, and what to do with dark, long, winter evenings, how not to recall summer?

Maybe you were lucky to see on the beaches of Crete a white flower of incredible beauty and tenderness, similar to a small lily. This is a sea daffodil, which is also called a sand lily or a lily of Sharon (the scientific name is sea pancratium)  – one of three biblical flowers. This is a lily, which consists of six petals in the form of a star of  David. Biblical scholars believe that this flower is the “lily of the valley” from the Solomon song. It blooms on Crete from August to October, and the micro-glades of the miraculous flower are often fenced, as it belongs to endangered species

Do not rush to pluck it or dig a bulb. Just lean in closer so you could smell it and admire its finest petals covered with a thin layer of wax-like substance. That is how the sea daffodil protects its tenderness from the salty spray of the sea. Despite all its fragility, the sea daffodil has learned to survive. Its seeds are like pieces of coal, covered with a thin layer of cork, which prevents them from drowning in sea water, where the wind carries them. For more than a month they can be in salt water without losing germination, and once on coastal sand, they give rise to new plants. The sea daffodil bloomed on Crete at the Minoan time, and is depicted on the walls of the Palace of Knossos. It survived both wars and earthquakes, but the development of tourism infrastructure turned out to be more terrible: now the sea daffodil is listed in the Red Book. 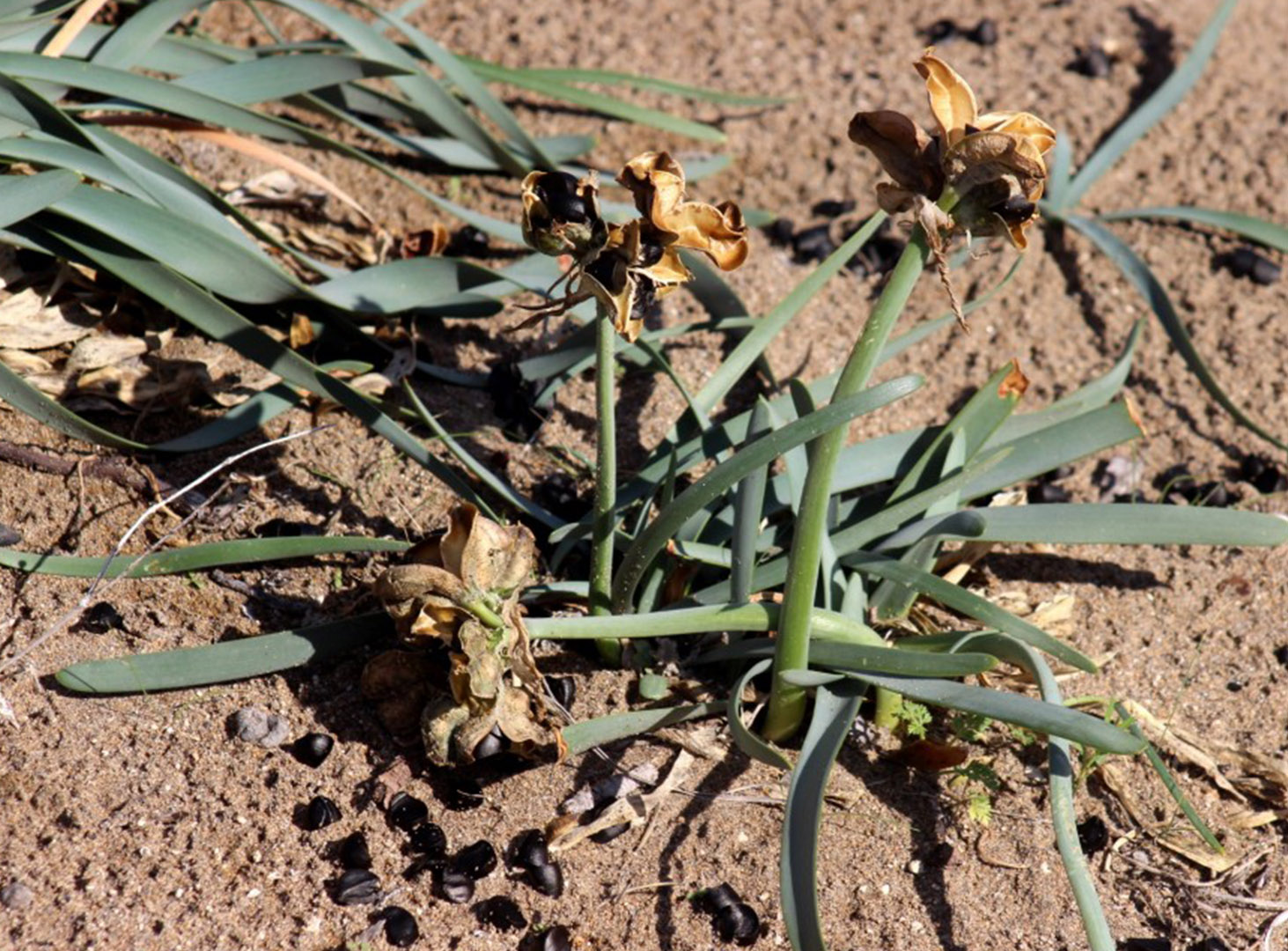 A beautiful legend is associated with the origin of this flower. Once the sea king decided to visit his possessions. On a team of dolphins, he began to go around them. In places where the king was, he left his mark – the bowstring rang, and the arrow pierced the coastal sand. At the end of each arrow was tied a white ribbon from a royal tunic woven from sea foam. But what was the king’s surprise when the next day he discovered that instead of arrows, beautiful flowers blossomed in the coastal sand. The sea king again left a few arrows. The story repeated itself. The next day, the arrows again turned into wonderful flowers. The sea king was more angry than before. He hid among the rocks to find out who decided to play a trick on him. In the morning, as soon as the first rays of the sun touched the surface of the sea, the beautiful wife of the sea king emerged from the waves. Kneeling, she kissed the white ribbon at the end of the arrow, which turned into a wonderful flower. The queen pressed against the flower and plaintively told the sea waves that her husband had completely fallen out of love with her. The tears of the queen fell on the petals of a flower and shone under the rays of the morning sun. And again love broke out in the heart of the sea king – so beautiful and fresh was his young wife. He stepped out from behind a rock, hugged his queen and wished that wonderful arrow flowers always bloomed on the coasts in memory of their bright love. So from a piece of the tunic of the sea king and the kiss of the sea queen, an amazing flower appeared, called the ” Sea Pancratium”. 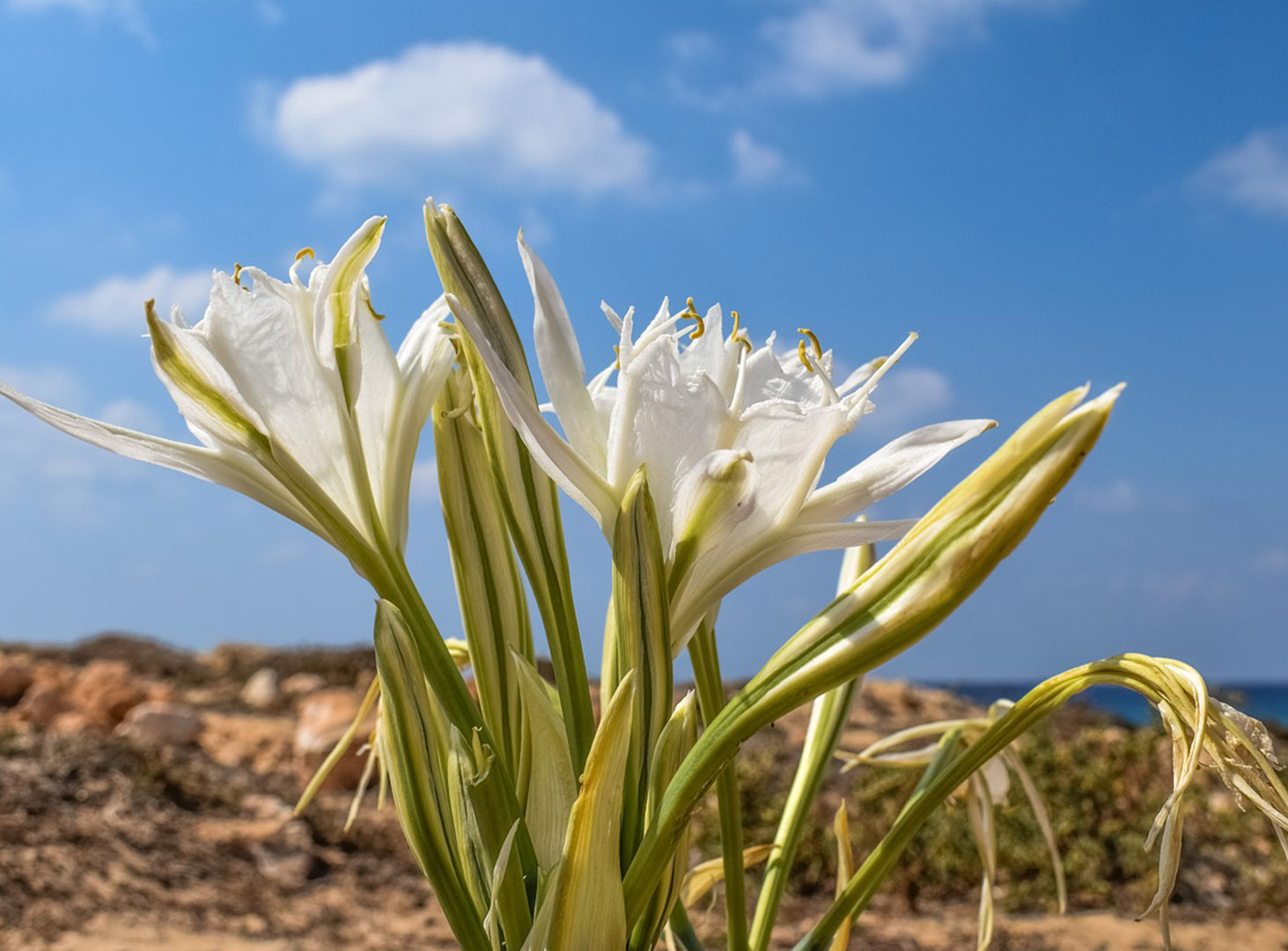 If you’re lucky you’ll see masses of these fragrant pure white beauties along many Crete beaches. Other times just one or two flowers seem to hide away under the shade of tamarisk trees. Don’t pick the Sea Daffodil though as they are becoming rarer and rarer due to intense tourism.