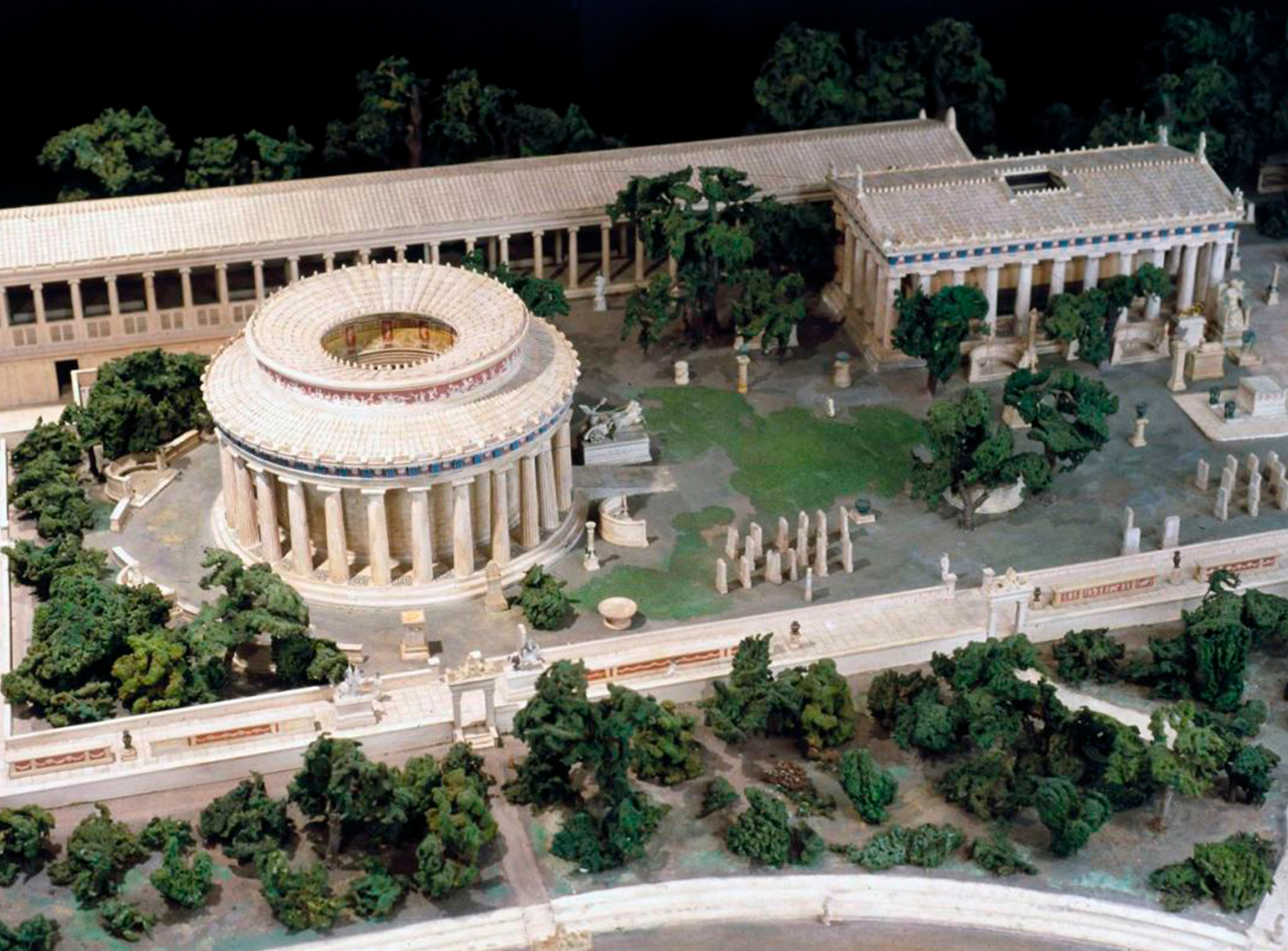 According to a recent statement by archaeologists, the ancient Greeks took care of citizens with disabilities around 2,400 years ago and created ramps in temples. The sanctuaries of Asclepius, which can be reached by entrance ramps, are the most ancient monuments of architecture, built taking into account the needs of disabled persons.

Focusing on the architecture of the 4th century BC, when the sanctuaries of the god of healing Asclepius were actively built in Greece, Dr. Debby Sneed of California State University noticed that they were built with a lot of ramps.

“Archaeologists have long known about the ramps of ancient Greek temples, but generally ignore them in their discussions of Greek architecture. The most likely reason ancient Greek architects to built ramps were to make some areas accessible to people with limited mobility,” said Dr. Sneed.

The ramps were first noticed after the reconstruction of the Asclepius temple sanctuary at Epidaurus* – an ancient city in the Peloponnese region, 74 km from Athens. In ancient Greek mythology, Asclepius is the god of healing, medicine, the son of the god Apollo and Coronis. The inhabitants of Epidaurus believed that Asclepius was born in the vicinity of their city. The temple was a complex of nine structures, to which 11 stone ramps led in addition to stairs. The sanctuary was one of the most important sites for healing seekers in ancient Greece.

Were these ramps specially built for people with limited mobility or for other purposes? The question is ambiguous.

In the ancient world, the attitude towards disabled people was mostly negative. In ancient times, people with physical defects were considered “unclean”, i.e. carriers of evil magical powers. Physical deviations were perceived as punishment of the gods for sins. People with disabilities in ancient Greek society were subjected to all kinds of insults and ruthless ridicule. So, in the IV century BC., in ancient Greece among the lower strata of society, offensive names began to appear, indicating the nature of a bodily defect: for example Miskelos (Lame) or Roikos (Crooked). Among the aristocrats who had any physical disability, such names were not found, since people had to take into account the high status of such persons. The exclusive right of respect in ancient Greece was enjoyed only by those disabled who were injured during a war.

In antiquity, the cult of a full-fledged, physically developed body was expanded. Of course, it is a mistake to think that all the ancient Greeks were muscular and fit, like the numerous sculpted Apollos and Dianas. There is a lot of evidence to the contrary: if you look closely at the sculptures and paintings, you can see people leaning on canes or crutches. Suffice it to recall Hephaestus – one of the Olympic gods. He patronized blacksmiths and ruled over fire and volcanoes. True, this is the only Greek god who had a physical disability (lameness) and worked physically. He made armor and weapons for gods and heroes. There are also studies of skeletons found, showing that arthritis and joint diseases were quite common among the ancient Greeks.

At the same time, methods of treating people with disabilities were being developed in Ancient Greece. For example, Aristotle studied deafness, and Hippocrates tried to treat epilepsy. Methods of hydrotherapy and physical exercise were used to treat acquired diseases, but they were available only to wealthy citizens.

It is known, for example, that in Athens, pensions were regularly paid to adult male citizens who were disabled and because of this could not feed themselves, but not to everyone: to those who were related to military affairs and reached age of 60.

In ancient Greece, the level of civilization was high enough to take care of people who find it difficult to walk or climb stairs. Ramps were widespread in sanctuaries, which were not only cult buildings, but also medical ones. A large number of visitors came to them in search of help and healing from the god Asclepius.

Of course, in Ancient Greece, there were no wheelchairs. If people simply could hardly move, it was much more convenient for them to climb to the temple by a ramp, and not by stairs; and those who could not walk at all, but wanted to ask Asclepius for health, were usually carried on palanquins and stretchers; and it was easier to climb with them on an inclined surface.

Earlier studies by archaeologists claimed that animals were brought into temples through such passages. However, Dr. Sneed is sure that this is a wrong interpretation, because animals were most often sacrificed on the street. Proof that the ramps were not built for animals or transportation of building materials, but specifically for people with limited mobility, are the places of their construction.

Originally built for the disabled, the ramps later turned out to be a very useful element of the temples: thanks to them, the elderly, pregnant women and children alike gained access to holy places. Everything was like with modern ramps, which are now used not only by people in wheelchairs, but also by people with heavy suitcases, and parents with strollers: just a real “accessible environment”.

Some archaeologists do not fully share the above opinion of Dr. Sneed. For example, Katja Sporn of the German Archaeological Institute suggests that ramps in temples are an architectural trend in the Peloponnese region that was generally short-lived.

“The ancient Greek world was not at all some kind of progressive utopia, but some interesting options were peculiar to it,” says Sneed. I would like to believe her hypothesis.

At the same time, it should be borne in mind that the Hellenistic period (323 -146 BC) was marked by the growth of enormous polytheism. Large and small deities surround the life of each person: they live everywhere – in a nearby grove and in any stream, without which existence is impossible, so that everyday perception of the world was influenced by the beliefs of neighbors and their gods. Only with this in mind, it becomes clear the order given by Xerxes in 480 BC to punish the Dardanelles with three hundred blows of a scourge for destroying by a storm a bridge of boats built there for his troops. It is important also to take into account the following statement of Cicero: “It would be madness to think that the magnificent world is a dwelling for man, and not for immortal gods. When you look at a large and beautiful house, can’t you, even without seeing the owner, be able to conclude that this house was not built for mice and swallows?”

In addition, Asclepius was not the only god in the pantheon with the function of a healer: in fact, all Greek gods had the ability to protect against evil and heal the sick. Legend says that when Asclepius was walking, leaning on a staff, suddenly a snake wrapped around the staff. Frightened, Asclepius killed it, but then a second snake appeared with some weed in its mouth. This herb resurrected the slain snake. Asclepius found this herb and with its help began to resurrect the dead. A Cretan legend said that he brought back to life the son of Minos, Glaucus, who fell into a barrel of honey when chasing a mouse and was found dead.

Since the 5th century BC, the cult of Asclepius has spread throughout Greece – his temple was built in Athens. At the same time, the secular school of doctors who were followers of Hippocrates on the island of Kos (off the coast of Asia Minor), reached a high level; and although there was no sharp border between temple medicine and secular one, there was a competition, and any improvement of a temple, including ramps, worked on the side of temple medicine. Secular medicine was pre-temple one, but due to the peculiarities of the worldview, the temple of Asclepius was also erected on this island – the site of Panhellenic festivals held every 4 years; and this temple competed with the temple of Asclepius in Pergamon (Asia Minor). This competition took place all over the world, since there were more than 400 temples of Asclepius: about 300 of them were in Greece. They were erected near a water source and were used as balneal resorts. In cities, theaters were located nearby. In the temples, the healed left votives – images of the recovered organs. They glorified temples and were intended to prevent a return of the disease. The recovered also threw coins into a sacred source.

The temple doctors – Asclepiades – treated with “iron, honey and milk.” Among their remedies were hydrotherapy, regimen, diet, gymnastic exercises and herbal medicine. The final stage of the procedure in the temples of Asclepius was a sacred ritual of incubation – sleeping in a sacred area with the intention of experiencing a dream for which the priests prepared the patients. In a dream, a cure or a remedy was to be revealed to everyone and interpreters of dreams served to explain this.

By the beginning of the Christian era, miracles of healing began to disappear and faked.

* In addition to the sanctuary of Asclepius, Epidaurus is a home to the best-preserved ancient Greek theater, distinguished by its exceptional acoustics and aesthetics. At the open area, designed for about 15,000 people, a whisper from the stage is clearly audible even in the uppermost rows. Until now, it staged large performances as one of the oldest festivals in Europe – the Athens and Epidaurus Festival (http://greekfestival.gr).