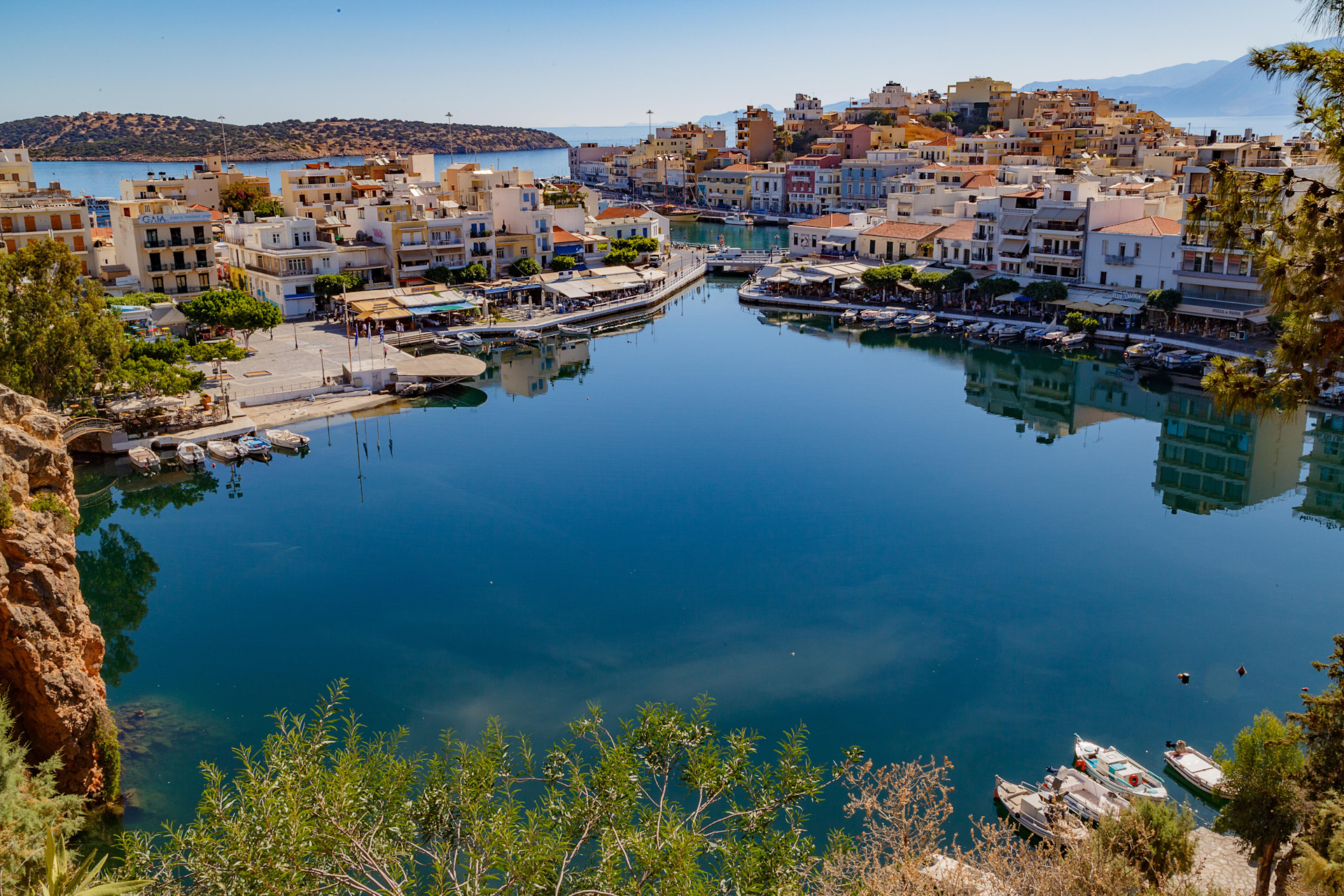 The unique natural lake Voulismeni is a hallmark of Agios Nikolaos, a resort town in Crete. It was around this lake with a shape of an almost perfect circle that this town was built, which is sometimes, with some exaggeration, considered a semblance of the French city of Saint Tropez.

The enchanting views of Voulismeni rightfully compete with the landscapes of the beautiful Cretan Gulf of Mirabello. The mirrored surface of the lake reflects pretty multi-colored town houses as well as quaint reddish rocks. Fishing and pleasure boats sway slightly along the shore. An idyll that everyone will want to plunge into!

The lake is surrounded by many legends and myths. One of the legends says that the lake has no bottom, and even its name is translated as “sunken”. According to another legend, the lake is connected to a volcano on Santorini. During the last awakening of this volcano, the lake water bubbled up, boiled and overflowed the coast.

The dark blue, almost black water of the lake is terrifying in its mystery. Locals have always believed that the depths of Voulismeni were guarded by evil spirits.

The main myth associated with the lake tells of two beautiful ancient Greek goddesses–Athena and Artemis the huntress. They bathed and relaxed in the crystal waters of Voulismeni. You can envy them because ordinary people are prohibited from swimming in the lake. 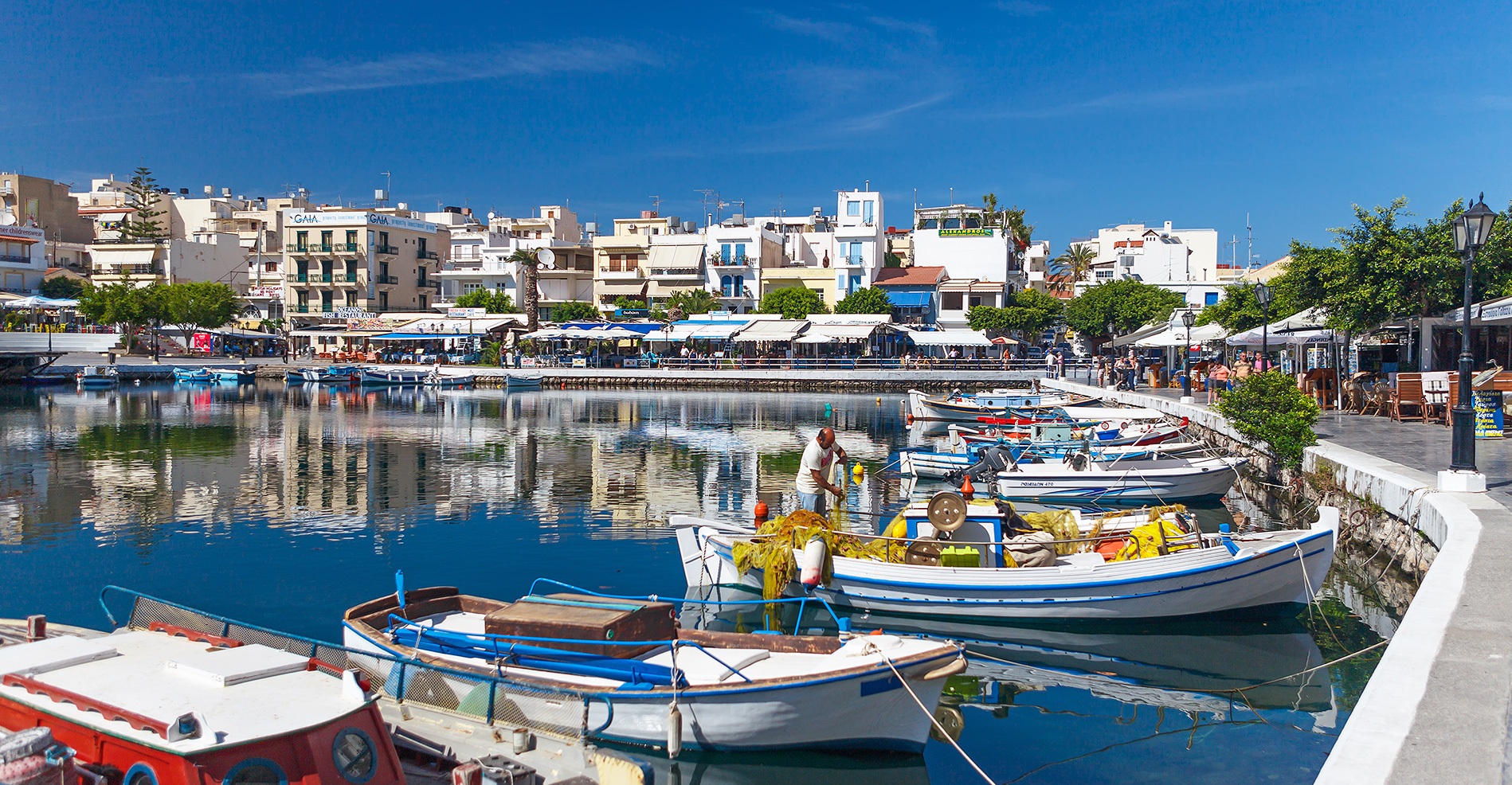 It is one of only two freshwater lakes in Crete, and of course it is not bottomless. The lake is a circle 137 m in diameter and 48.8 m deep in the central part. With such a width, its depth seems unrealistically large.

Voulismeni is of natural origin and is a kind of geological miracle. Due to the reddish tint of the rocks and the sheer bank, it is believed that it was formed as a result of volcanic activity, in the process of a crater subsidence. Confirmation of this hypothesis was a strange event that never found an explanation. In 1956, when Santorini volcano woke up for the last time, causing a strong earthquake and large tidal waves, the water overflowed the shores of the lake and a dead fish appeared on the surface, which suggested the presence of some kind of geological fault that connects Voulismeni and Santorini. However, this version has not been confirmed. Most likely, the lake is the mouth of an underground river.

In the evenings, when the resort of Agios Nikolaos comes alive, the lake becomes a center of attraction for numerous tourists. On the eastern side of the lake, the lights of numerous cafes, restaurants and traditional taverns go on; and all they have access to the lake and wonderful views.

Voulismeni and its surroundings are the heart of this cozy town, the focus of its nightlife. It is possible that at one of the parties in the many discos and nightclubs of Agios Nikolaos you will unexpectedly meet a world celebrity: movie and show business stars love to relax here.

For several years in a row, at the end of July, the international diving competition “Agios Nikolaos Cliff Diving” has been held on the lake. The world’s best male and female athletes dive from a cliff of 16 meters high on the northern side of the lake, from two points of varying difficulty. A great spectacular and exciting show has been taking place in Crete since 2016 and has already gained immense popularity. And on the eve of Easter, when there are practically no tourists, locals gather around the lake at midnight. They set off holiday fireworks and sing Greek songs. For them, Voulismeni is not only a unique natural site, but also a place to meet and celebrate. It is a part of their life!

The captain of the Royal Navy, Thomas Spratt, who compiled a map with the presumable location of Troy, according to which Schliemann found it, surveyed also East Crete in 1852. Describing the lake, he wrote that a small stream flows out of it into the sea. At that time he measured the depth of Voulismeni as 210 feet (64 m). It is this figure that is now used in almost all publications about the lake; however, the Geological Department of the University of Athens conducted a detailed underwater survey of the lake and found that its maximum depth is only 48.8 m. A strong earthquake occurred in 1856 with an epicenter 40 km from the lake. Most likely, it became the reason for the blockage of the freshwater source at the bottom of the beautiful lake. The water began to stagnate, and then the western corner of the lake shore collapsed. Therefore, its depth could decrease from 64 m, measured by Spratt, to 48.8 m. Soon the lake with stagnant water was called by the locals Vromolimni–”Smelly Lake”. The obvious solution was to dig a channel to the nearby sea so that denser seawater replaces stagnant fresh water and removes the source of the odor. 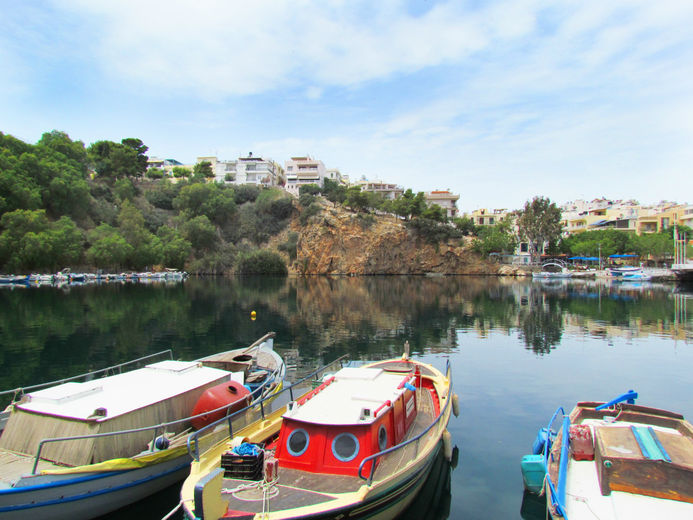 Historically, Voulismeni has always been isolated from the sea; and only during the Turkish possession of Crete in 1867 it was connected to the sea by a small canal. Despite the fact that sea water got into the water area of the lake, the existing underground sources, and maybe an underground river, did not allow the water to become completely salty. Now the upper layers of the lake are salty, but the lower ones remained fresh.

The wider canal that we see today was built by a French army between 1905 and 1907 with a lifting pedestrian bridge that allows loading and unloading boats not at sea, but in a calm lake. 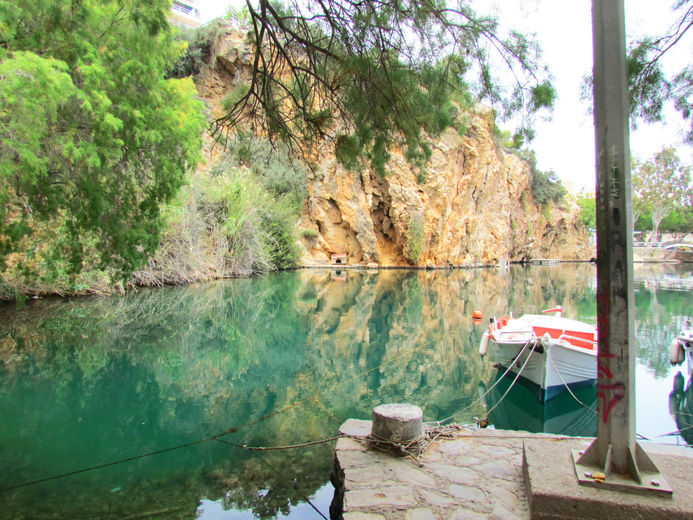 There were people who sank to the bottom of this lake. The famous French explorer Jacques-Yves Cousteau spent many years searching for the mysterious Atlantis. In the early 80s of the last century, he, together with a team of like-minded people, arrived in Crete, where he hoped to find traces of a sunken civilization. His legendary “Calypso” also made a stop in Agios Nikolaos. The researchers were interested in the ancient lake, which, according to scientists, was connected to the Santorini volcano.

At the bottom of Voulismeni, researchers discovered the remains of German military equipment from the Second World War. They even raised an old German motorcycle to the surface.

Old people remembered that after the Nazis left Agios Nikolaos, the inhabitants of the city began to throw everything they found into the “bottomless” lake: enemy armored vehicles, weapons, shells. So the freedom-loving Cretans wanted to get rid of the terrible war attributes forever and completely free their hometown and island from any reminder of the invaders.

If you fly to Crete, be sure to visit the resort town of Agios Nikolaos and its heart–Lake Voulismeni, which is incredibly beautiful.