Skip to content
TheNewCrete > Recreation > On the roads of Crete: In proud Sfakia 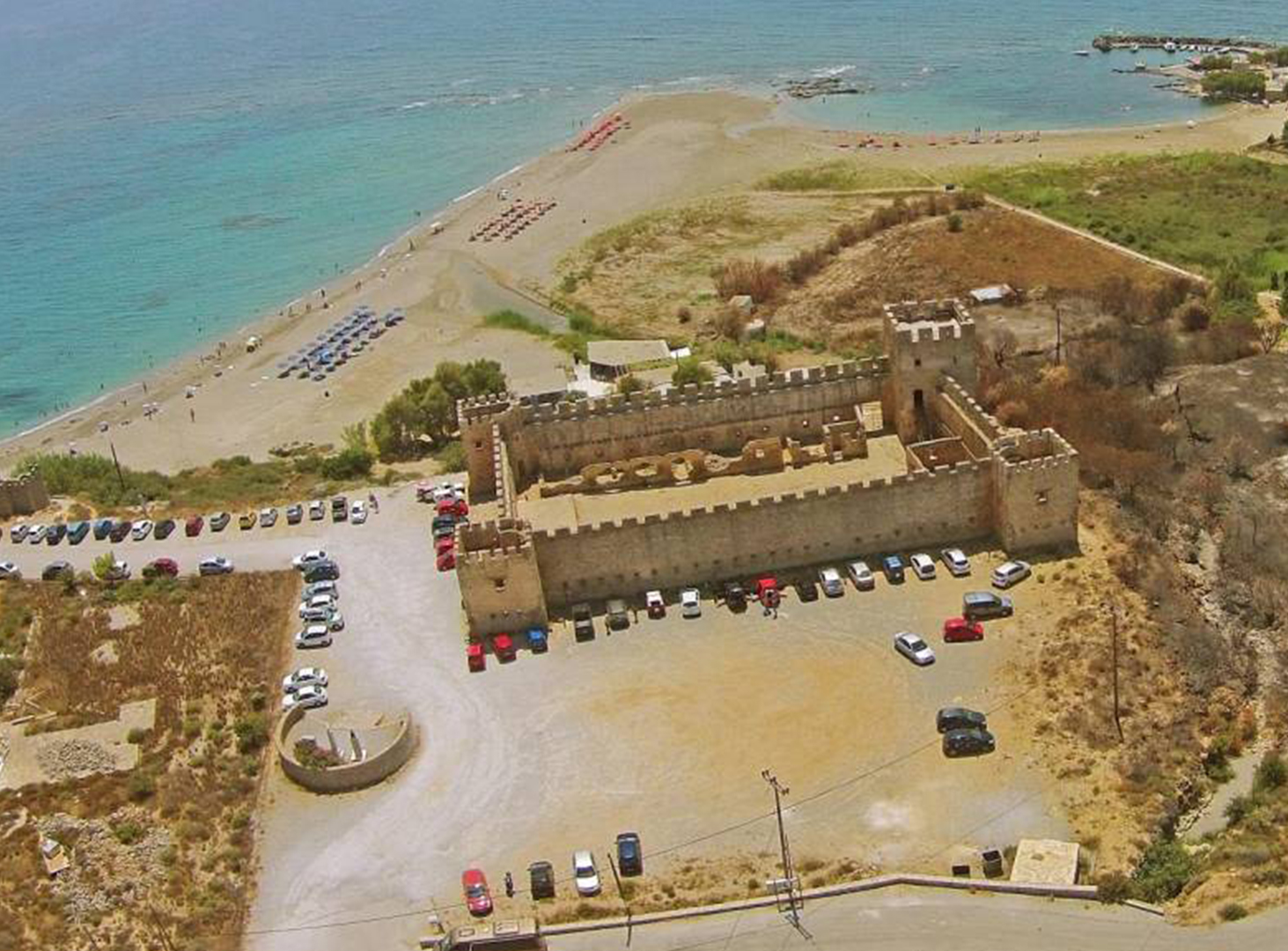 The Route 9 on Cretan roads presented by thenewrentcar.com leads us to the most freedom-loving region of Crete—Sfakia. Until now, local residents are considered to be special as is their land.

Ghosts of the Frangokastello Fortress

The first stop on the route is the Frangokastello Fortress. The fort on the coast —in the form of a square with four towers in the corners—was built by the Venetians in the 14th century. They didn’t build it for long, but painfully: the local people destroyed almost every night what was built during the day; the legendary Patsos, brothers, organized nightly resistance to the hated “Franks” (strangers) until they were captured and executed…

The fortress was nevertheless built, but the name that did stick with it was not at all a Venetian—St. Nikita, but another one, given by the Sphakyots,—Frangokastello, that is, the “Fortress of Aliens”.

Several times the fortress turned out to be a site of Sphakyots’ battles with the Turks. It was here that the famous Cretan rebel Daskaloyannis with the remnants of his army surrendered to the Ottomans in 1770. They say that he was brutally tortured here, but Daskaloyanis endured everything in silence…

In 1827, Frangokastello was captured by Cretan rebels led by Hadzimihalis Dalianis. Soon, the Ottomans besieged Frangokastello and brutally dealt with the rebels; and the winners did not bury anyone—they just threw the bodies into the moat…

So many blood and deaths saw these walls but as much courage and bravery!

The fortress is one of the best preserved in Crete and still looks impressive thanks to a restoration. Inside, a stage is arranged where Shakespeare’s plays and classical music concerts are performed: the sights with ancient walls in the background are, of course, impressive. But most of all, Frangokastello’s guests are attracted by the unsolved mystery of the “ghosts”, which come, according to one version.

…Shadows of people dressed in black—on foot or on horseback with weapons—moving from the church of St. Harlampy to the fortress of Frangokastello. Voices, the stamping of feet, clang of weapons are barely audible…

The vision lasts about 10 minutes. There is no trace left on the film after filming but are numerous oral and written testimonies of eyewitnesses—extremely authoritative people, including diplomats and priests. According to a traditional version, all these shadows are nothing but the souls of rebels. Others say that it’s a mirage… Maybe you will have your own version after a stay there until dawn?

12 km from the fortress is a small fishing village of Chora Sfakion. Today it is the center of a municipality and was the heart of resistance for a while during the Venetian and Turkish rule. The land here has always been scarce, so that the Sphakyots were engaged primarily in fishing, maritime commerce and piracy. Therefore they were distinguished by independence and love of freedom. The impenetrable Lefka Ori (White Mountains) in the north, combined with the wild rocky coast, played also a role. By the way, nearby, in the village of Anopolis, the same Daskaloyannis was born, and local residents proudly demonstrate to the curious the cave where the associates of the “teacher Yannis” minted coins for free Sfakia.

At its peak, about 100 families lived in Chora Sfakion. Each had its own house church. But the village was heavily bombed while German were capturing Crete in 1941; and only a few ancient house chapels have survived to this day. Among classic sights here, on the shore of the bay, there is also a memorial in memory of the Allied soldiers rescued by English sailors during the Cretan operation of Germans; but Chora Sfakion is attractive not only with its material evidence of military history.

It is said that Sphakyots still retain even their “peculiarity”. Here you can meet the blue-eyed Cretans with “hyacinth locks” (that is, fair-haired), which are described by Homer. With full confidence, many consider themselves as the true descendants of the island’s indigenous population and, like many years ago, honor sacredly traditions. Basically, they preserved their usual way of life (excepted piracy), so tourists come here just to plunge into the real life of the fishing village and enjoy the people, and wild nature.

Here is the beginning of about 20 tourist routes along the gorges of Samaria, Aradaina and Kallikratis; and leaving the car in a free parking lot, you can take a trip by sea from the harbor on the coast by ferry or water taxi: for example, to the cozy village of Loutra, which is hidden from civilization, or to Agia Roumeli.

Agia Roumeli, where the sea is kissing rocks

Agia Roumeli is a handful of houses scattered at the foot of the majestic Lefka Ori. The mountains hid the village so that you can get here either by sea or by passing the Samaria Gorge: Agia Roumeli is at the gorge entrance from the bay. Imagine how it feels: to walk along the gorge for several hours, where the space is only above. Suddenly—oh! Sea, horizon, sky and… hospitable houses of the village. Every day, thousands of tourists go this way to plunge into the sea at the end, to sit at a table in a tavern. 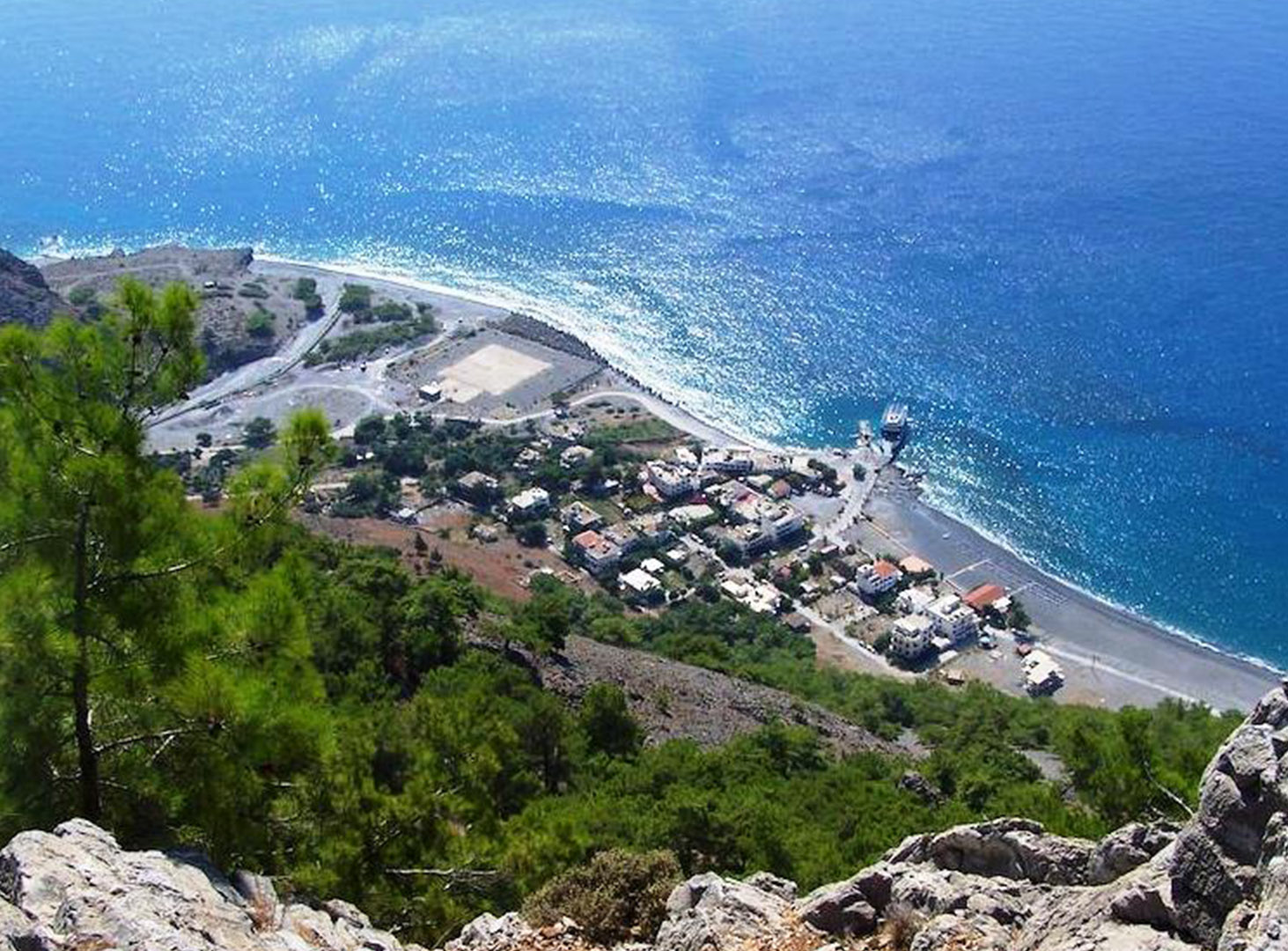 A fan of antiquity should go to the temple of Apollo and Artemis, which is west of the village – the remains of the ancient Roman city of Tara are there – or to the church of Panagia (XIV century). 2 km to the north is the old Agia Roumeli, destroyed by the flood of 1954. On a hill is the former Turkish fortress, from where the coveted island of Gavdos is visible—by the way the southernmost in Europe; and if you like reading letters on rocks and stones, go along the beach to the west, or east. The farther from the central – the pebbled one with taverns, umbrellas and all kinds of water activities, – the more surprising is the stone fairy tale. You will discover the real Sfakian Crete—severe, proud and beautiful… There will be a lot of discoveries, including Marble Caves.

Directly from the village you can go on a short walking route to the Samaria Gorge, and then return halfway, but real travelers begin acquaintance with Samaria from above, from the Omalos Plateau.

Samaria, the longest (16 km), the deepest (2 thousand meters), the most picturesque gorge of Crete—and Europe! To decide on a walking route along it, you need not just good physical training but also a little courage. Do you have such quality? Then, forward—to the Omalos plateau, where the Samarya National Park begins with rare and endemic species of plants and animals. 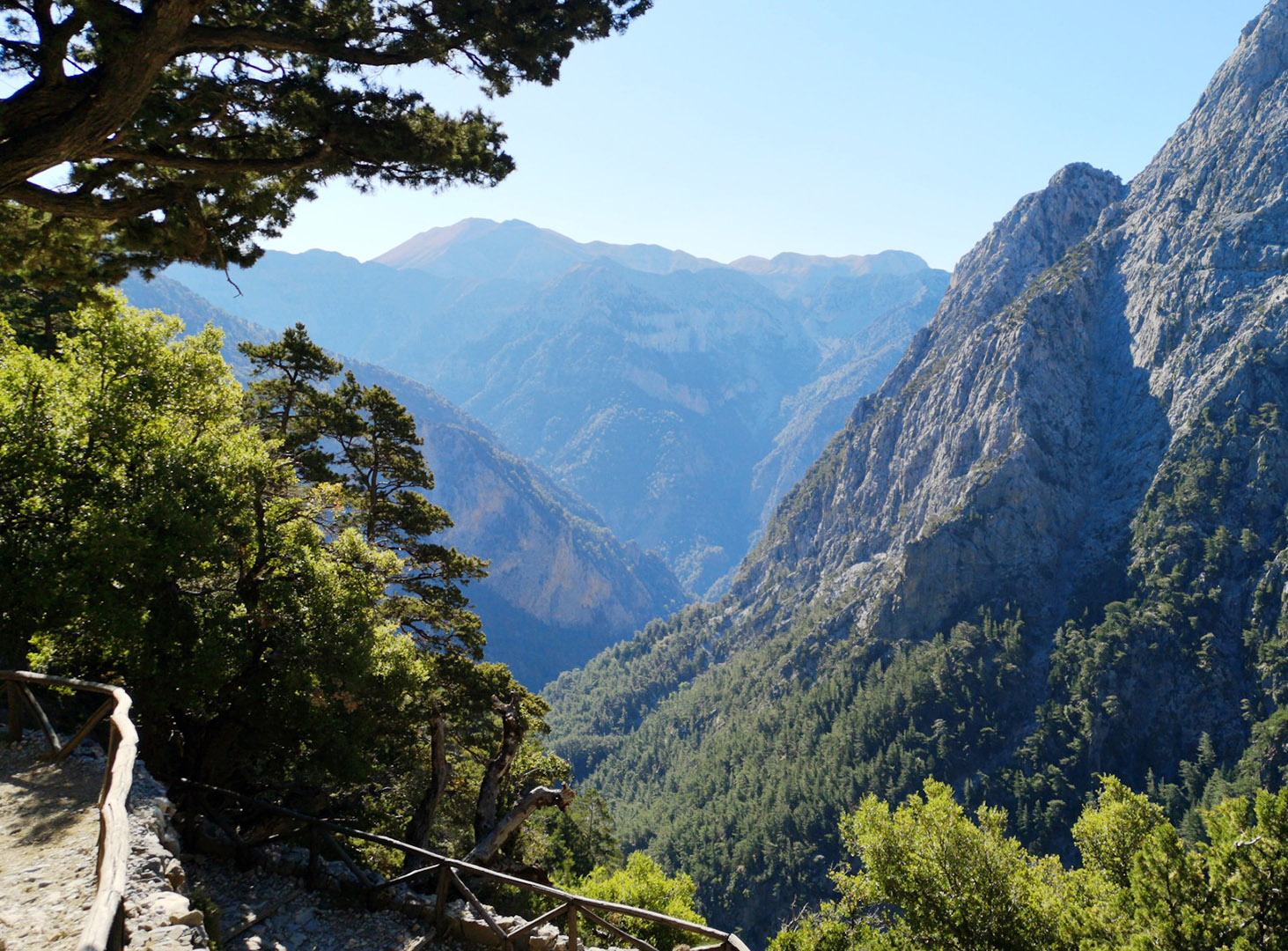 Of course, besides courage, you should stock up comfortable shoes, a backpack with a snack, water bottle, hat and a staff that Cretan shepherds carry around: very useful!

The first stage of the journey is a kilometer-long descent down the stairs. The load on your knees will be not weak, but Samaria is just around with its bizarre rocks, the smell of herbs and the sun through the pines and cypresses. Further, along the pebbles, the river that turns into a creek in the summer.

The tourist path along the gorge is quite equipped: there are benches to relax, springs with water, and somewhere in the middle of it, a “parking” of donkeys: if someone does not take the hiking route, the eared ones will bring him to the finish line. Signs with numbers, indicating the distance from the start, are also encouraging as well as some stone pyramids folded by tourists. In addition to numerous “brothers along the trail” in the gorge, you can meet kri-kri goats feeling like masters here: and therefore they are not at all timid. Unlike their neighbors in the gorge – wild cats, martens and badgers, – they will gladly accept refreshments from your hands. Walked 13 kilometers hurt your legs, but your soul filled with impressions is singing. It is verified: not in vain the Greeks themselves love to come here. At the exit from the gorge, there is a surprise! A waiting for you bus will deliver to the final point of the route – to Agia Roumeli (about 3 km); and the gentle dark blue sea will take you into its arms…

If you need not only a car, but also good, professional advice for planning travel routes around the island, contact the company thenewrentcar.com