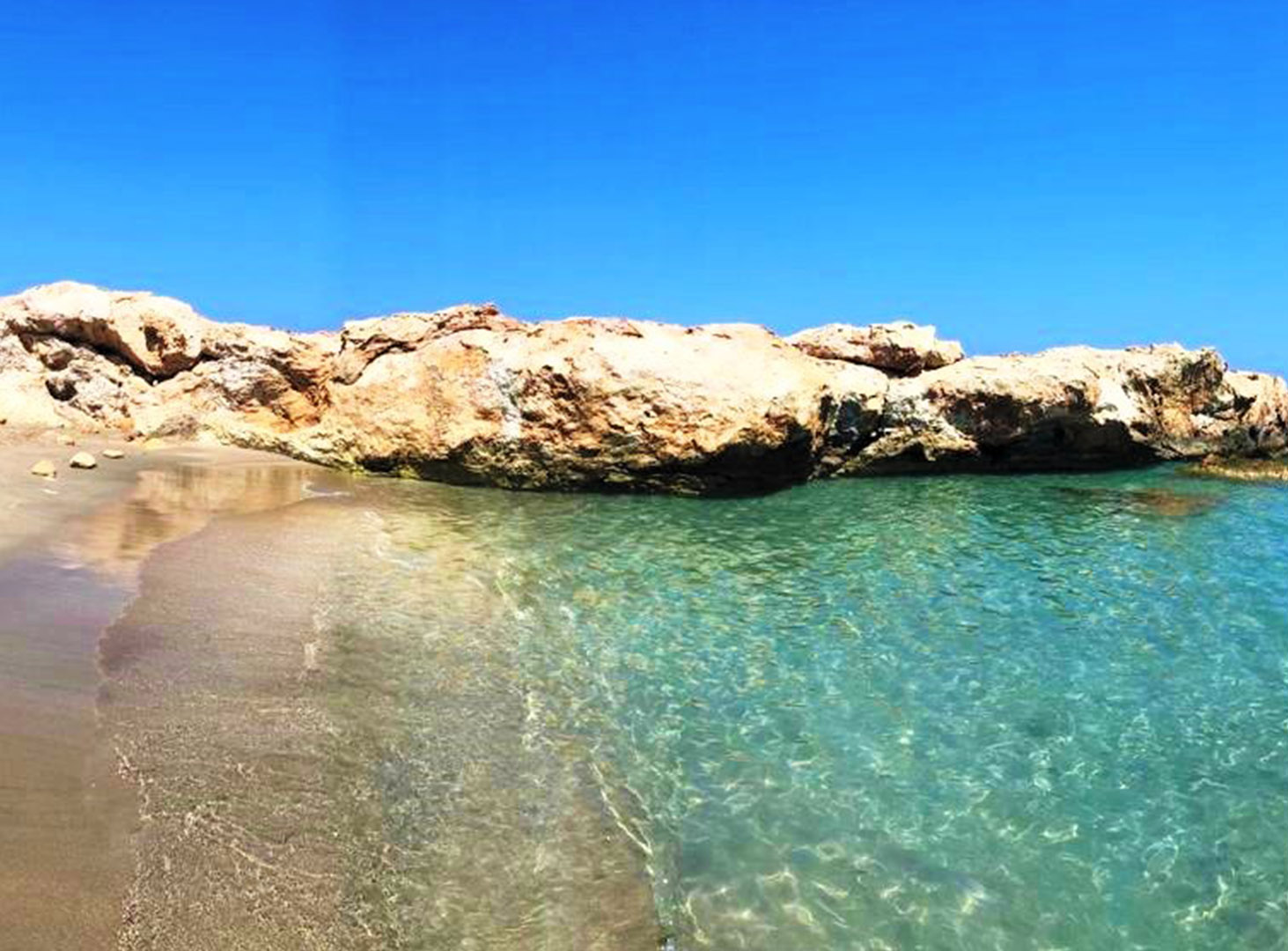 Most travelers to the exotic places of Crete prefer to visit the palm beach of Vai in the east of the island. It is beautiful in its own way but often crowded due to its fame. In principle, there are not much exotic in it, except of palm trees. In my opinion, if you go to some distant beaches, then in the east of Crete it is best to see the beach of Xerokampos (Kserokambos).

It is located in one of the most isolated areas of the island, so has remained a corner of natural, pristine nature. Pure sand and pebbles, shallow bottom on the coast, warm water, calm blue sea—just an idyll.

A big advantage is easy parking along the beach. The largest influx of people is only in August: there can be many people at some places of the beach next to the asphalt road but not a crowd. The only drawback is a long serpentine road. If you prefer traveling by car, love the breathtaking scenery and serpentine roads are not obstacles for you, then Xerokampos is your choice. Stunning views along the road from the tops of the mountains to the Libyan Sea, the beach and three small rocky Kavali Islands opposite the beach will undoubtedly surprise you.

The serpentine goes down, and a small tourist village near the sea begins to be seen. It has the same name—Xerokampos and stretches along the road, and the seashore. The residents here are not more than three dozen people, but in the season the village comes to life. It has a decent mini market, several taverns, and recently there have been appeared many apartments for rent. 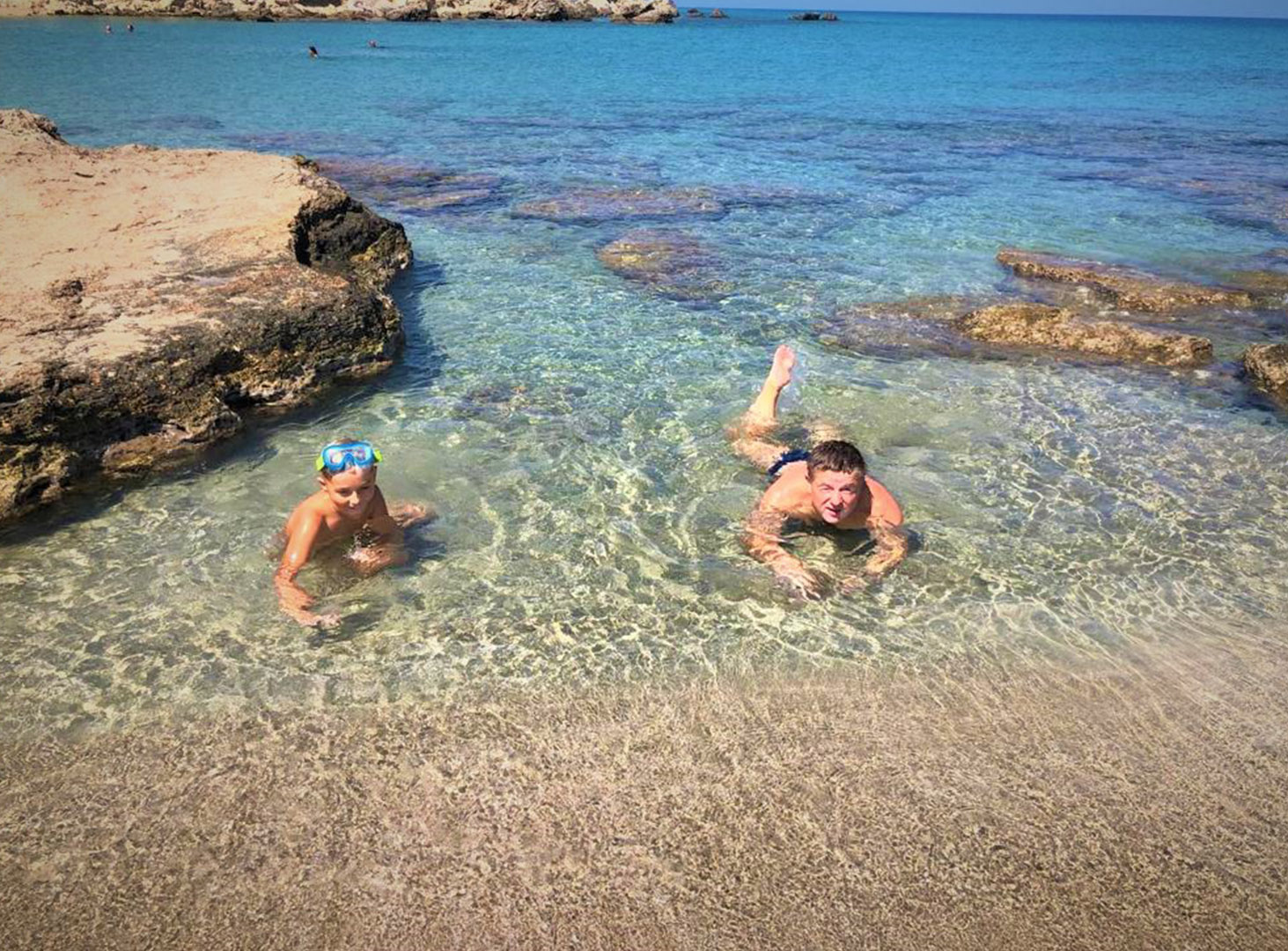 Xerokampos beach with its coastline of about 6 km is by Cretan standards a quite large one. It is an alternation of completely different, original and cozy beaches, sheltered bays and even long rocks. There are there beaches for every taste—with white sand and turquoise water or with golden sand, rocky with large pebbles or with small pebbles. There is even a white clay beach for lovers of natural spa! This unique one is called Argilo (“Clay”). It is narrow and has a steep bank—a part of solid white clay cliffs. A piece of clay can be crushed with a stone and moistened with sea water to put the resulting slurry on the skin. As soon as the water dries, you will become bright white. This is a natural cleansing mask. Wash off everything in the sea, and your skin will become soft and tender. 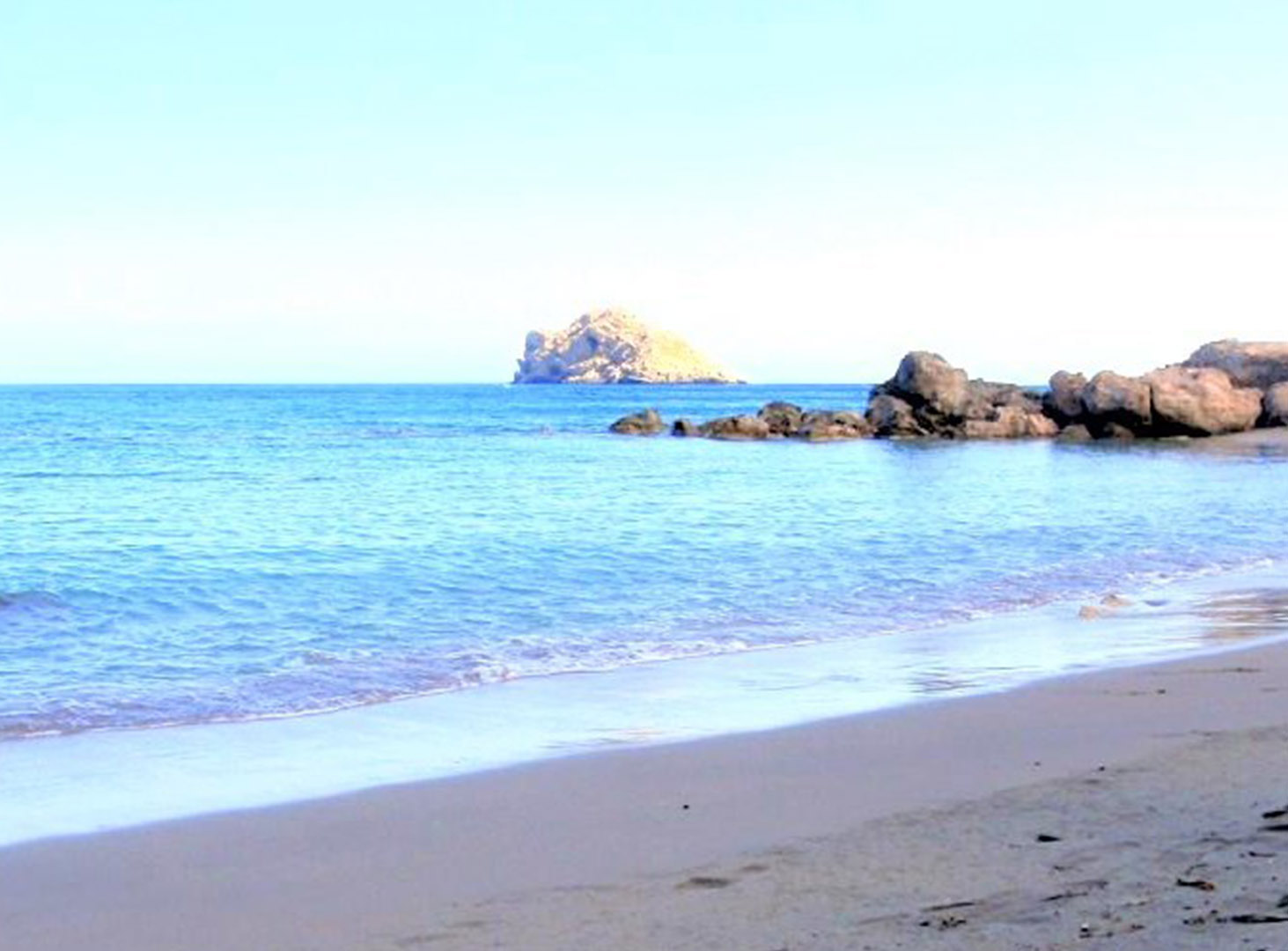 Another unusual beach is Alatsolimni (“Salt Lake”)—a wide sandy zone up to 200 m long. It is dry in summer and turns into a salt lagoon in winter. The sand in the lagoon is very hard: its particles are conjoined with salt from dried seawater. In the spring there are there a lot of herons. One says that even flamingos appear.

On Xerokampos there are more than 20 beaches and bays. One can write about them endlessly. Look at the description and select the places that you prefer according to the link: www.xerocamboscreta.com

On Xerokampos, there are no rental services for umbrellas and sun loungers with the exception of several bays. Showers and toilets are in small numbers but there are. Travel by car and take everything you need for comfort with you. Thank God that there are there no active noisy water entertainments traditional for the sea coast (boats, jet skis, etc.), so you can swim without fear with a mask and pleasure.

A quiet, clean place away from chaos and without special infrastructure of an organized tourist center, but here you find the sea, one of the most beautiful in the Mediterranean, nights full of stars and tranquility, a typical Cretan warm welcome and hospitality. One of the most beautiful places on Crete, as if specially created to restore strength and recharge energy. I advise you to visit it and stay here longer.

How to get to Xerokampos

The beach is located in the prefecture of Lassithi, in the community of Sitia, far from large settlements and densely populated areas of the island (coordinates: 35.036181, 26.219143).

From the town of Agios Nikolaos, the journey will take two hours (a little more than 100 km.). You can safely get there from Ierapetra (about 76 km) and Sitia (about 46 km) in an hour.

The two nearest settlements to Xerokampos, which have developed infrastructure, are the villages of Zakros (10 km) and Ziros (18 km). On the way to Xerokampos from Agios Nikolaos and Ierapetra, not reaching 8 km. to the village of Ziros, you must pass the uninhabited village of Etia.

It is believed that Etia originated in the Byzantine time: at this is indicated by two churches of St. John and St. Catherine, located next to the road. During the reign of Venice there was a rapid growth of Etia: its population was over 500 people, and it became the largest settlement in this area.

Nowadays Etia is known for one of the most significant buildings of Venetian architecture on the island of Crete – Villa De Mezzo built in the XV century. It was originally three-story and belonged to the De Mezzo family, as evidenced over the entrance by the coat of arms of this family. 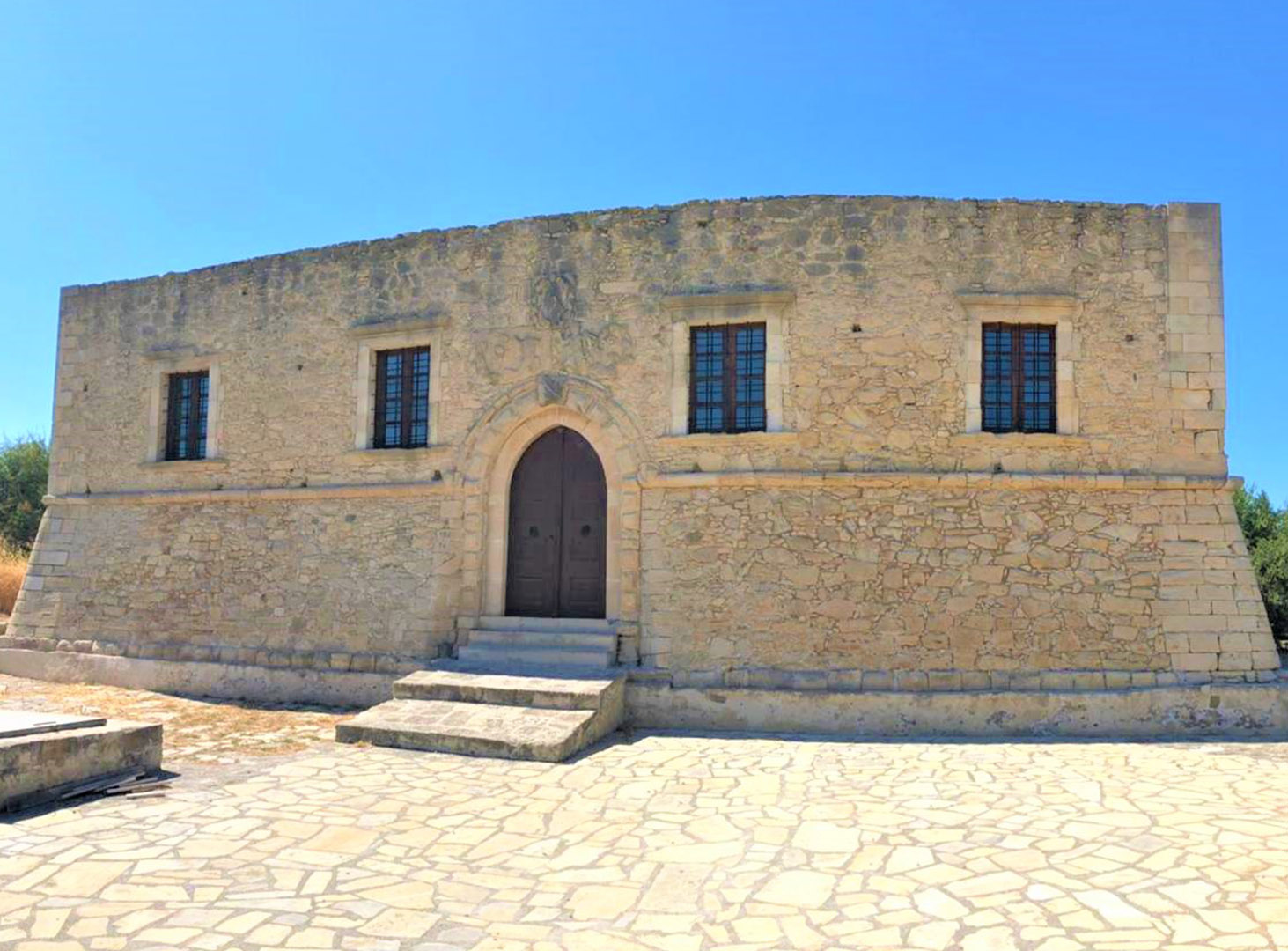 After the conquest of Crete by the Turks, the villa becomes the residence of a Turkish dignitary. She received the new name Seragio-Serai (distortion of Italian and Turkish words with the meaning Harem-Palace). Around the villa were built new buildings and is a well-preserved fountain. The currently restored villa is declared to be the historical monument. You can also see it, the churches and the entire abandoned village. 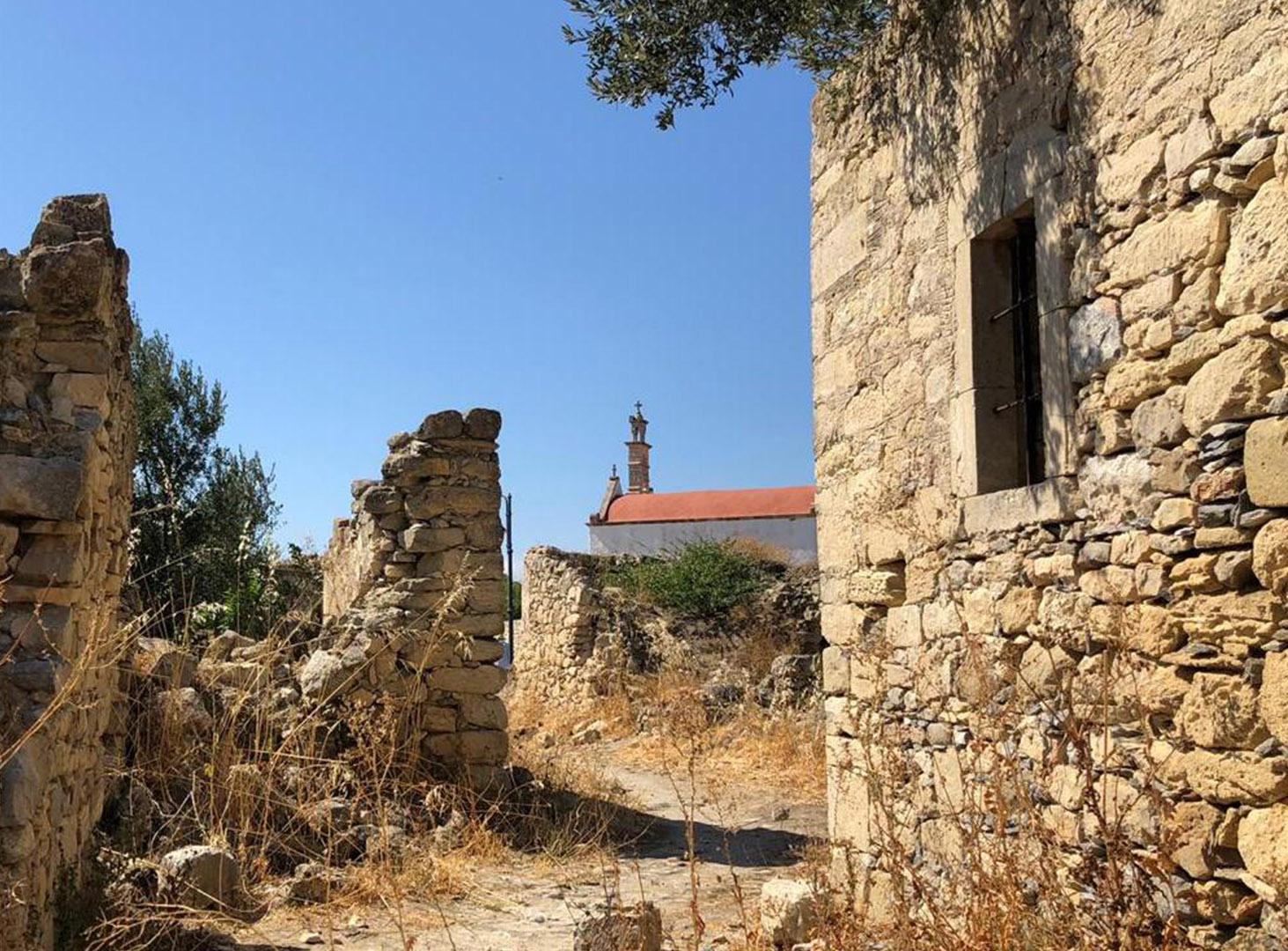