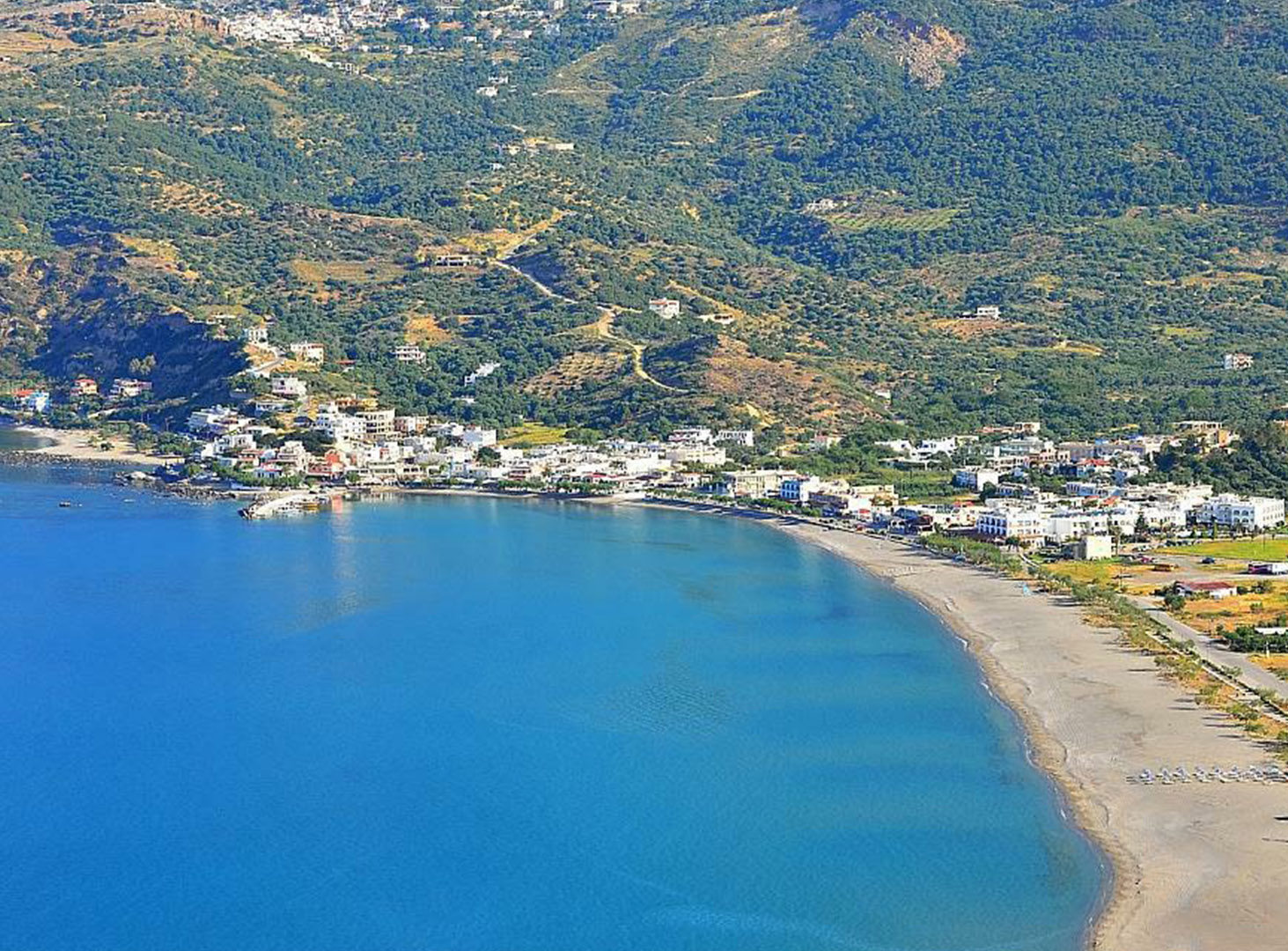 Continuation of the article from № 3, 2019
https://thenewgreece.com/recreation/from-the-heights-of-spiritual-life-to-the-blessed-land/

4,5 miles from the Preveli monastery is the village of Plakias, a secluded and infinitely comfortable place, as tourists say. The village looks artless: a scattering of small mountains around, modest houses, a compact group of apartments and hotels, restaurants and taverns on the main street, and a turquoise sea reflecting the whole picture. The long coastline is the pride of Plakias; and the largest beach has the same name as the village. The specialty of this beach is a comfortable slowly dipping in the water through velvet sand or small pebbles. In the center of about a kilometer long space, there is a site with a stone slab not bothering anyone: go around and swim at your pleasure.

Water here is slightly cooler than on other beaches, but the contrast between the temperature of the air and the water evens out in the “velvet” season. Umbrellas, sun loungers, various water activities, including diving marathons, are abundant on the beach, but there are not many tourists here. Keep in mind that in the summer a bad wind is sometimes throwing sand at the tourists, but in September it subsides. In addition, all worth it for the miracles taking place on Plakias Beach. One of them is the autumn-winter full moon, when falling on the rocks moonlight gives rise to amazing light effects in the depths of the sea. In addition to tourists, squids are also coming to take a look at the unusual phenomenon and to be caught by locals directly with their hands, as they say. Another miracle in the vicinity of Plakias is the blossoming of sea daffodils (sand lilies, or lilies of St. Nicholas) in one night at the end of summer. It is the tenderness itself mentioned in the Song of Songs.

Within a radius of 12 mi from Plakias you can’t count all the sights that are more convenient to get by a rented car (remember thenewrentcar.com)! There are also walking routes. In addition, the riding school in the village offers an alternative mode of transport, like the Old Marina, where you can rent a boat: for fishing or just for swimming in the open sea.

Are you looking for a betrothed? So you need to go in Spili

The small town at the foot of Mount Kedros, at the halfway point from Rethymno to Agia Galini, is Spili (DD 35.216820, 24.535441. DMS 35 ° 13’00.6 “N 24 ° 32’07.6” E). “Spili” translates as “caves”. Indeed, in its vicinity there are several large caves. But our aim is not the caves—rather the Venetian fountain in the central square. 19 of its lion heads offer to drink pure mountain water. If you manage to swallow water of the all 19 without a break, your betrothed will meet you almost at the next bend during your walk along the shady narrow streets. Better do it in the evening when the flowing water of several sources is the soundtrack: they look especially impressive with backlight. Maybe it happens when you visit the Maravel Shop, where you will find not only cosmetics but also olive oil, herbs, honey and raki. At the entrance, there is a “soap tree”. Inside you will getting dizzy from the smells. The soap here is a special one, with a “filling”: with a slice of citrus in—a lemon one, for example, or with a flower in—a jasmine soap. By the way, the owners of the store offer a free tour to their own phyto farm “Maravel”, where are grown herbs and plants that they use in production. 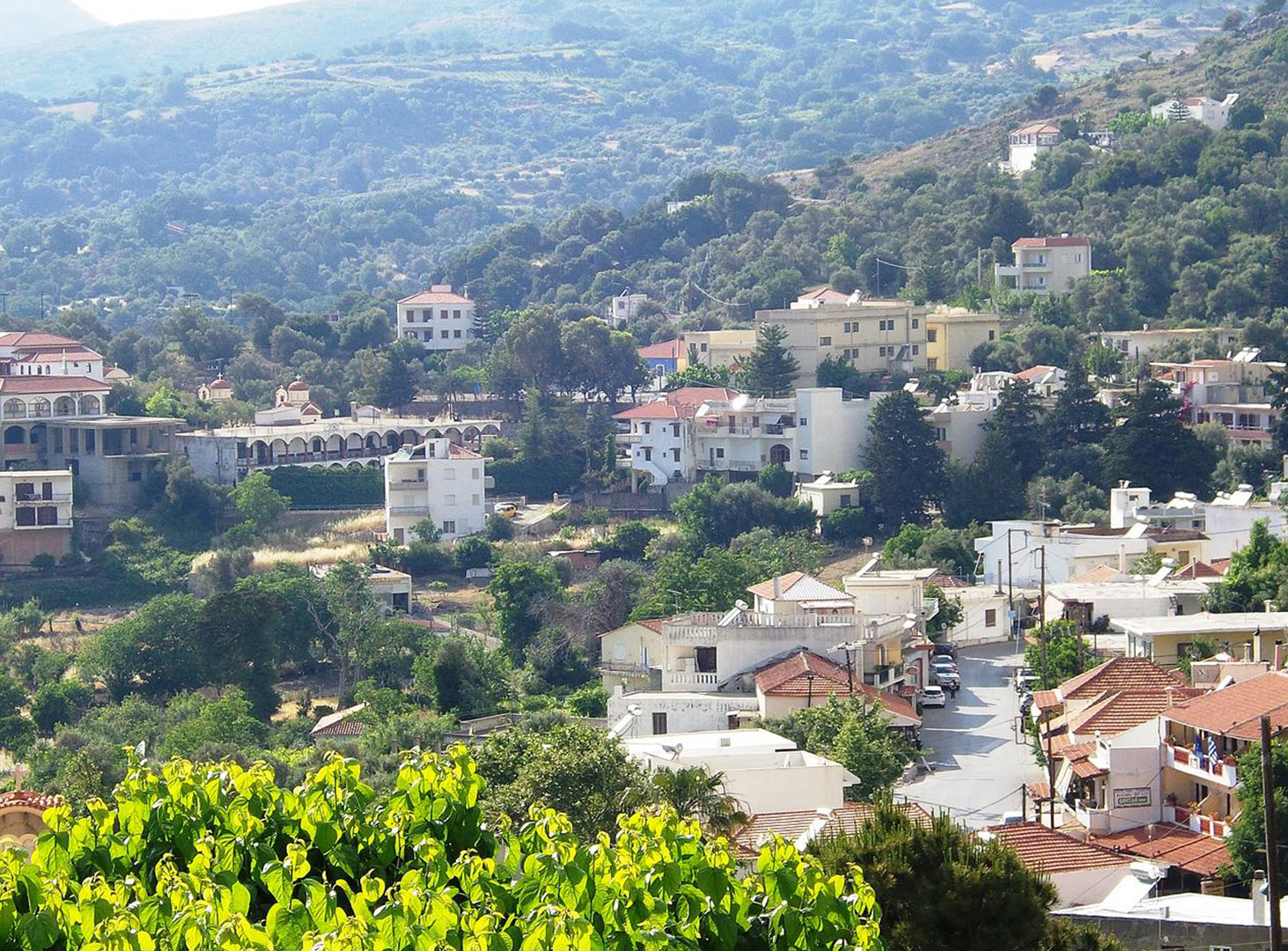 Maybe your betrothed is waiting in the Folk museum of Spili? Incredibly cute host (tourists say so) will tell you about the past and present of Spili, Crete, Greece (in a mixture of English, Greek and your native—he is a polyglot!), and even offer a glass of raki. He is an enthusiast and loves his job, but whether he was married, it was not possible to find out. The entrance is free, but you can leave “no matter how much you pity.” By the way, the museum has its own page on the Internet. You can look.

Didn’t you meet your betrothed? Let’s go further along the roads of Crete!

On a date with Rethymnon

Ah, Rethymnon, a Venetian beauty in a half mask and frivolous enchantress! Once she waved her skirts in a carnival dance, and that’s it—you are gone! You will come back here again and again to hear the clatter of her heels… In March, Rethymnon turns into a huge dance floor for three carnival weeks—a crazy world with music, parade, tasting of traditional Cretan dishes and drinks, theatrical performances and also a treasure hunting. If you do tray to get acquainted with the history of the city, you can be not just a participant but even a winner of a paid vacation at a local resort.

A wearing veil beauty can wait for you in Platanou Square near the Rimondi Fountain, where lions, similar to those of Spili, offer to drink delicious mountain water, or at the lighthouse on the waterfront. It is worth a glimpse there too. Or she waits at the summer wine festival in the city garden, another point is in one of the night taverns on the waterfront. In summer, many of them open only at sunset to celebrate summer until the morning.

If you are tired of impressions, you can soak up the beaches (there are enough of them in Rethymnon), and help Archelon volunteers taking care of caretta-caretta turtles at the same time. Their office in a kiosk is easy to find at the Old Port.

The “Ringing the Bells” Arkadi

From Rethymnon is about 12,5 mi. to the monastery of Arkadi. This is one of the national symbols not only of Crete but of all Greece. Why?

Arkadi was one of the main uprising centers of the Orthodox Greeks on the island in 1866. It was then called Çanlı Manastır, which meant “Ringing the bells”: it was one of the only two where the Turkish authorities allowed ringing during the service.

So the monastery bell sounded, gathering the Cretans to revolt… When most of Crete had already come to terms with defeat, Arkadi remained impregnable to the Turks. At the beginning of November 1866, about 300 fighters gathered in the monastery and about 700 women and children took refuge from nearby villages. The Turkish army besieged Arkadi; and the abbot Gabriel was asked to leave the holy monastery, but he refused. When the Turks nevertheless managed to enter the monastery, part of the surviving Greeks went into the cellars full of powder kegs. When as many enemies as possible were approaching the basements, one of the rebels set fire to the powder. A powerful explosion destroyed buildings, claimed the lives of many people: both invaders and Greeks. The survived rebels were executed by the Turks. Since then, Arkadi is a symbol of freedom and sacrifice of the Greek people. UNESCO declared monastery a European Freedom Monument. 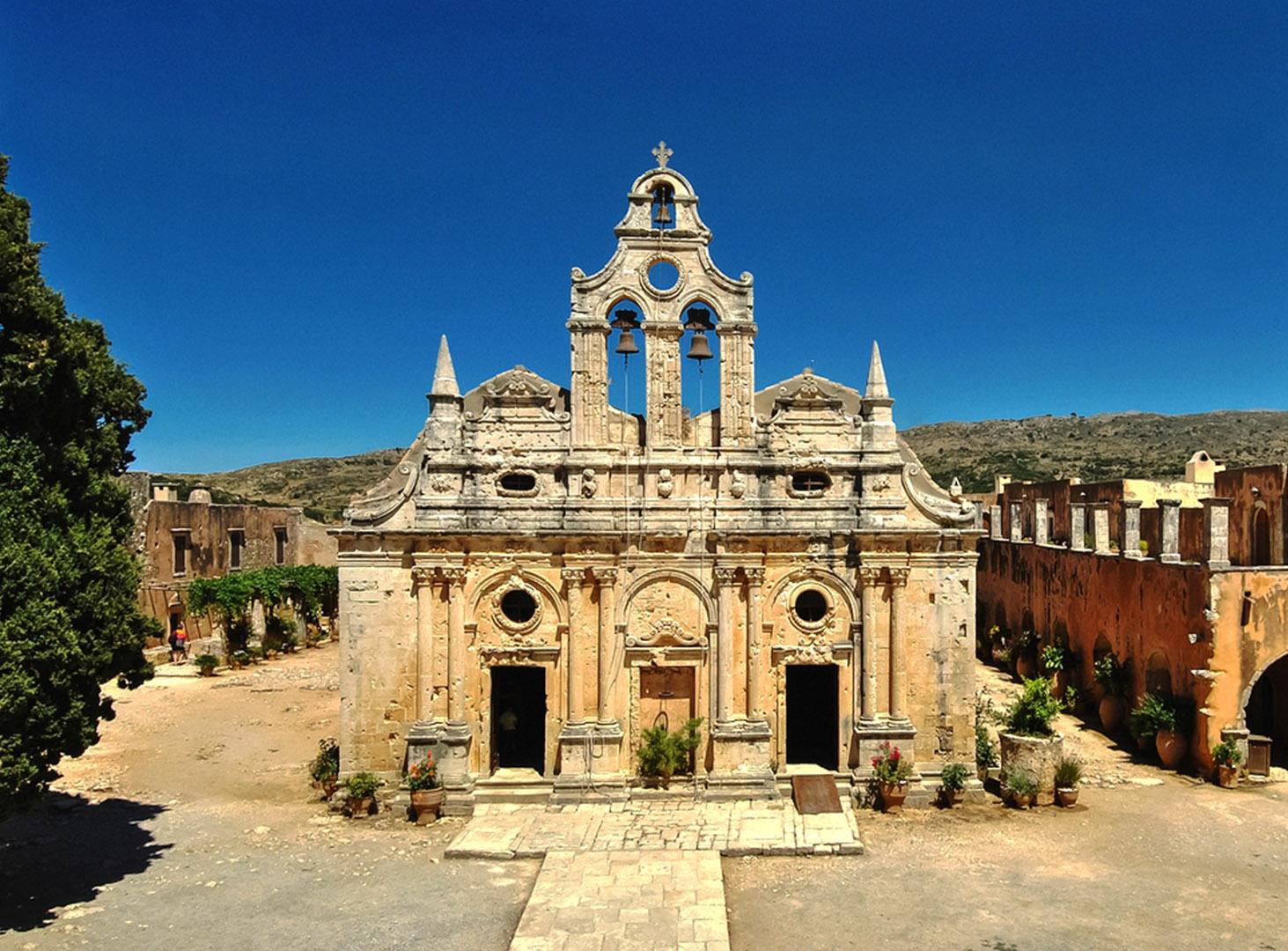 Arkadi does not forget about the past. Dead cypress with a fragment of shell in its trunk is staying still in the monastery courtyard. The photos in the museum are showing faces of Greeks fighters for independence. A crypt is arranged in the building of the former windmill: the remains of people who died during the explosion are stored here… As soon as the bell strikes, sorrow covers Arkadi and makes even noisy tourists quiet down. Every year on November 8, a prayer service is held in memory of the dead.

Bake bread and milk the goat…

… you can at the final destination of our route—on the farm “Agreco”. This is a paradise for those who knowing the world empirically—through touch, smell, sound and for those who want to bake bread in a wood-burning stove, work in the vineyard or, together with a Greek woman, prepare a sumptuous dinner for a large family.

The founders of the farm (on a private territory of 99 acres) tried to recreate the traditional rural way of life on Crete, “the fragile balance between man and nature.” And this is not a popular picture. The farm lives, grows grapes and olives, produces wine and oil. Goats here are milked and cheeses cooked… The most important is that tourists are allowed to participate in all this! There is such a program, “Farmer for a Day,” which offers not playing but living a full farm day with all its worries: get up on a dawn, feed cattle, milk goats, collect eggs from chicken nests, bake cheese pie and etc. One says that tourists were still not permitted to shear sheep: they can only watch it! …As well as the work of the wine press, making tsikoudia raki…. 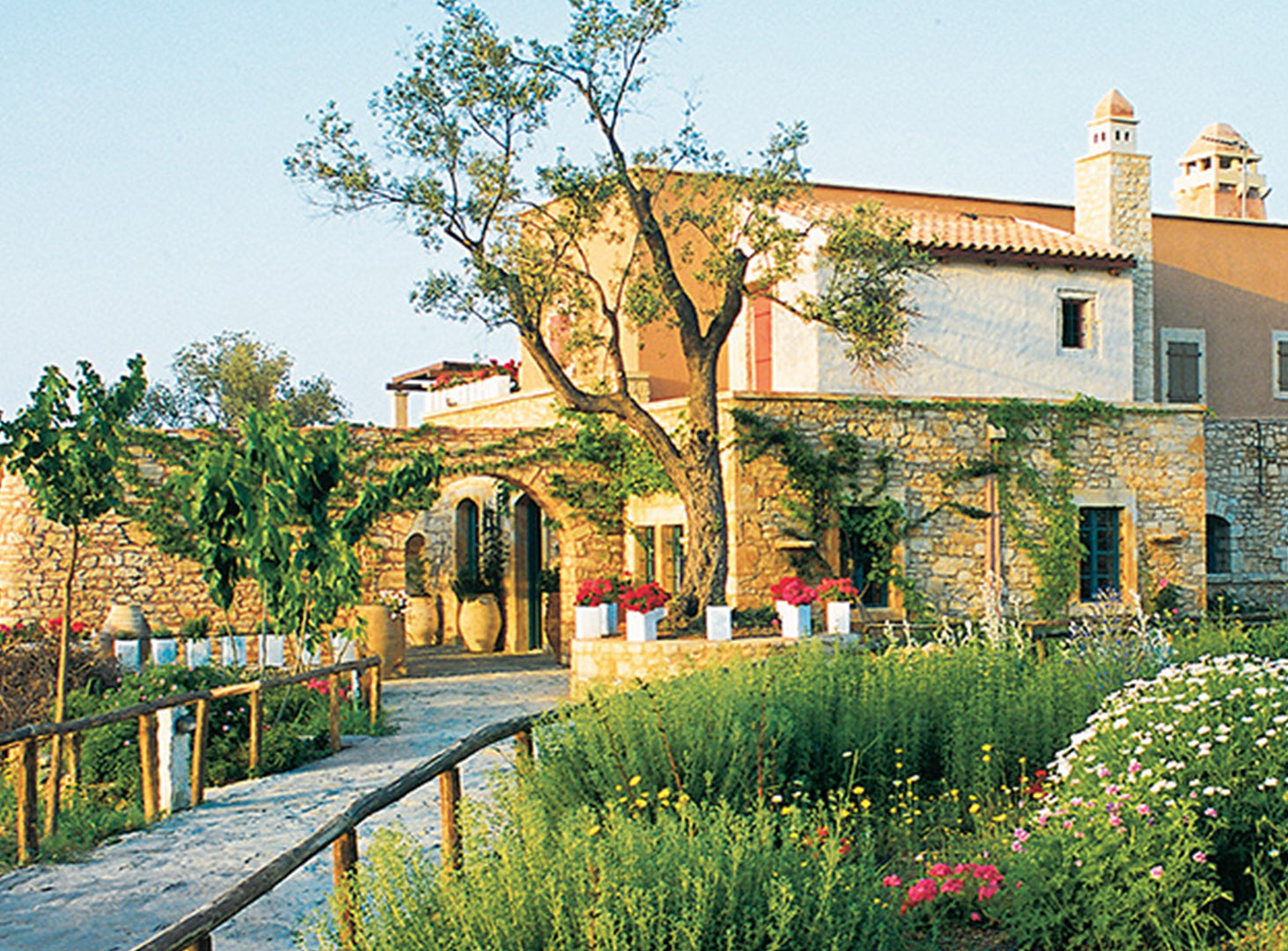 If the whole day is too much for you, there is another option—“Farm Tour”. You will walk around the estate, take a look at the chapel of St. Nicholas the Kourtaliotis, see an apiary and a mini-zoo, a water mill and a “silk” factory. You will also visit a painter’s studio. We repeat: the local fount of impressions is inexhaustible. An impressive view from the hill, on which the farm is located, and all the olive groves and vineyards around; a store with organic products and cosmetics and the tavern, finally, where will you be served dishes prepared from the products grown here! About 4 mi from the center of Rethymnon only! Those who have visited Agreco say: “It is obvious here that the Greeks live with joy every day of their lives and so work.”

If you need not only a car, but also good, professional advice for planning travel routes around the island, contact the company thenewrentcar.com