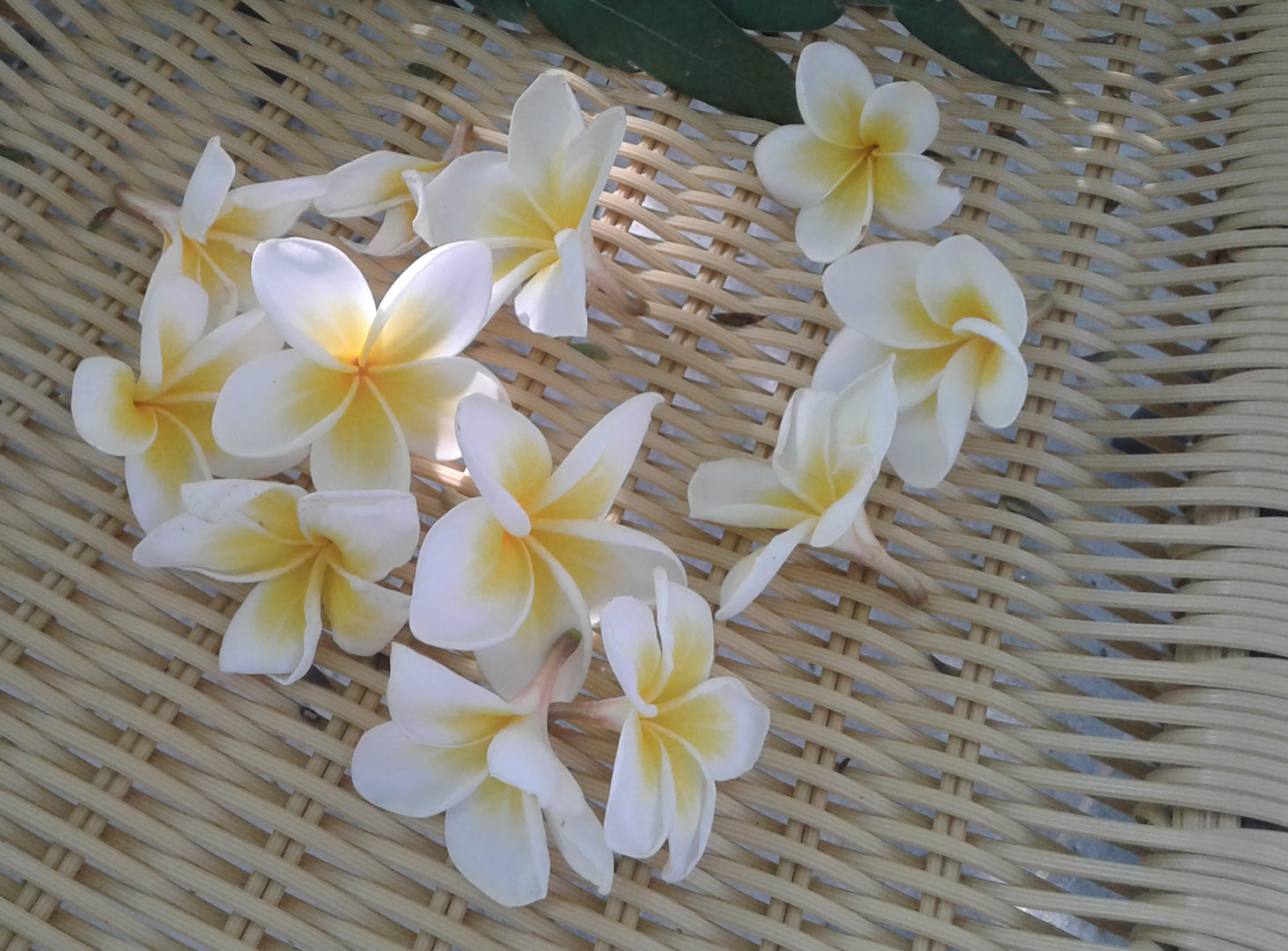 With all the luxuries of blooming Crete, this snow-white flower is beyond competition. It doesn’t not only surprise–you are really taken aback in front of its alien perfection. Garlands of white inflorescences on compact trees are not too noticeable at bright noon, their time is a fresh morning or quiet twilight, when the petals literally glow. It is worth to come closer, and you will plunge into the sea of smell, which you want to breathe the rest of your life. Touch a tender petal with your hand. It seems cool: “Where are you from, beautiful child?”

The homeland of the plumeria is not precisely defined. Presumably, this is Central and South America. However, in our time, plumeria “settled” around the world and grow in the tropics and subtropics of many countries; and everywhere it is shrouded by a veil of mystery.

In the East, for example, plumeria is a symbol of immortality and eternity, which is understandable: cut flowers of it retain freshness for a long time, and the ignition temperature of the branches is about 500 degrees C! Plumeria is often planted near Buddhist temples, and its flowers are used as gifts to the gods, therefore it is often called a temple tree; and not only Buddhists are confident in an alien nature of the plant. In Peru, for example, mere mortals were generally forbidden to touch fallen flowers and even smell them. Only the priests could touch the sacred flower. In Indonesia today, they believe that if a person is buried under a plumeria tree, he will be especially loved by the gods.

In Laos, Nicaragua, and on the island of Bali, they went even further. Recognizing the divine nature of the plant, they made plumeria flowers a national symbol. Among the ancient Aztecs and Mayans, the plumeria flower was considered the embodiment of eroticism; and in modern Thailand it is called lilavdi, “the temple magnolia” and still used at wedding ceremonies and at birth celebrations. Finally, in Hawaii: there, plumeria flowers are used to weave traditional wreaths of lei to introduce tourists during local public holidays.

In Europe, plumeria became known in the 17th century thanks to the expeditions of the Franciscan monk Charles Plumier. This tireless naturalist discovered and described more than 4300 species of new plants, that’s why Сarl Linnaeus called in his honor plumeria, one of the plants discovered by him. But why is it also named frangipani?

Another one fascinating story… A certain French perfumer, the Marquis de Frangipani, who spoiled compatriots with perfumes based on herbs and spices in the 16th century, came up with a new fragrance. “Divine!”–ladies and gentlemen sighed. But the general surprise came when it was discovered that the plumeria flowers in the greenhouses of the nobility have exactly the same smell! Somehow magically, the perfumer guessed the recipe of nature itself. By the way, there is another mysterious property of plumeria flowers: they change their aroma depending on environmental conditions. So, the morning five-petalled snow white flowers may smell a little different than the evening ones; and one of the 10 known species of the plumeria–Plumeria inodora–does not smell at all….

The most famous species are the white plumeria (with its slightly highlighted middle) and the red one. Bees circle over these outlandish flowers, hoping that they “taste” just good as are looking, but they will be disappointed: the flowers have no nectar in at all. Their fruits are long pods of green or reddish-brown color (with seeds) and inedible. But the use of them, in addition to solely admiration, people still found. Extracts from plumeria oil are widely used in cosmetology: they have anti-inflammatory, antioxidant and regenerative effects on the skin, therefore they are excellent for use in night creams, as well as in deep cleansing products.

Plumeria can be grown at your home: it is better not from seeds but from cuttings, experts say.