Skip to content
TheNewCrete > Unknown Crete > When will we arrive to Crete at the new airport? 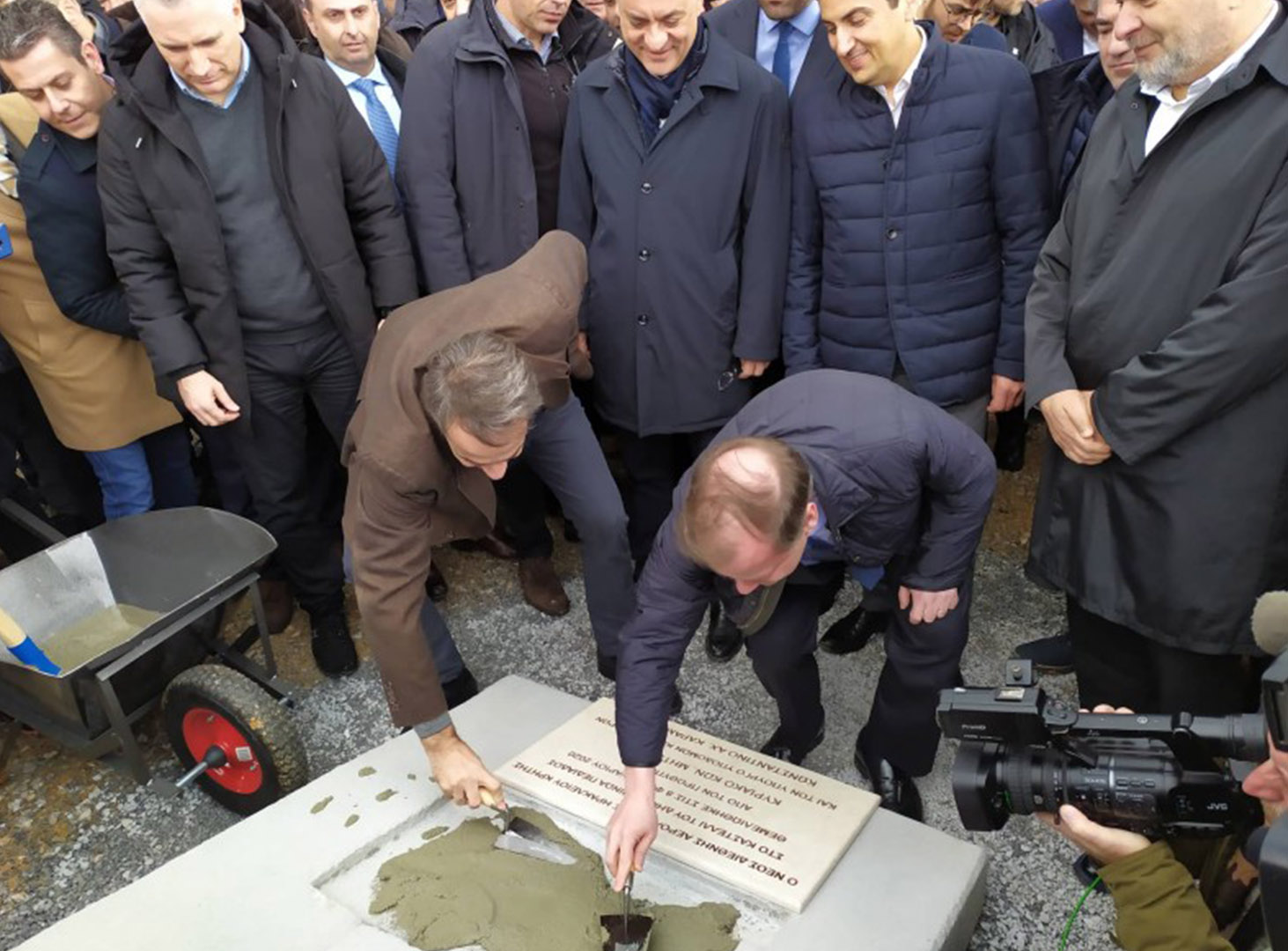 On February 8, a crucial event for Crete took place—the start of the construction work at a new international airport in the town of Kasteli. The ceremony was attended by Greek Prime Minister Kyriakos Mitsotakis accompanied by a group of ministers.

“I always feel better when I come to my homeland,” the Prime Minister said.—But today I have a especially feeling because I am here to “build an airport” …The modern Kasteli airport will be environmentally friendly and the best in the country …It will improve the quality of life for the inhabitants of the island and develop the infrastructure of Crete …I had a pre-election commitment to implement two large project that Crete needs. Today we are laying the foundation for the first of them”.

Kastelion is a small village in the community of Minoa Pediada in the Heraklion regional unit, located 24 mi southeast of the Cretan capital. Near the village, there is a small military Kasteli Airport – with a 9 800 ft long runway. Airport ICAO (International Civil Aviation Organization) code is LGTL. It began operating in 1940, and so far has been used by F-16 Fighting Falcon fighter jets from the 133rd Greek Air Force combat group.

For the first time, the idea of ​​building a new international airport at this place was voiced in 1986 by Andreas Papandreou, then Prime Minister of Greece; and the Greek government repeatedly tried to transfer the project to the implementation phase. Initially, the new airport was planned to be commissioned back in 2014. There were several companies from France, China, Greece and Spain, claiming the right to carry out its construction. But for the unstable economic situation in the country over the past few years, a project of this magnitude is a great financial risk. So a long time potential investors have not been ready to provide their concrete proposals. Several times the Greek government had to extend the deadline for construction, financing and operation applications for the new airport.

Only in 2019, after completion of the international tender, the concession allowing the Greek-Indian consortium Ariadne Airport Group to begin the construction of the airport was signed by the Ministry of Infrastructure and Transport and then ratified by the Greek Parliament.

The new airport will be built on an area of 1482 acres adjacent to the current military airport in Kasteli (additional 54 acres are reserved for commercial activities). It will be almost twice as large as the current international airport in Heraklion. 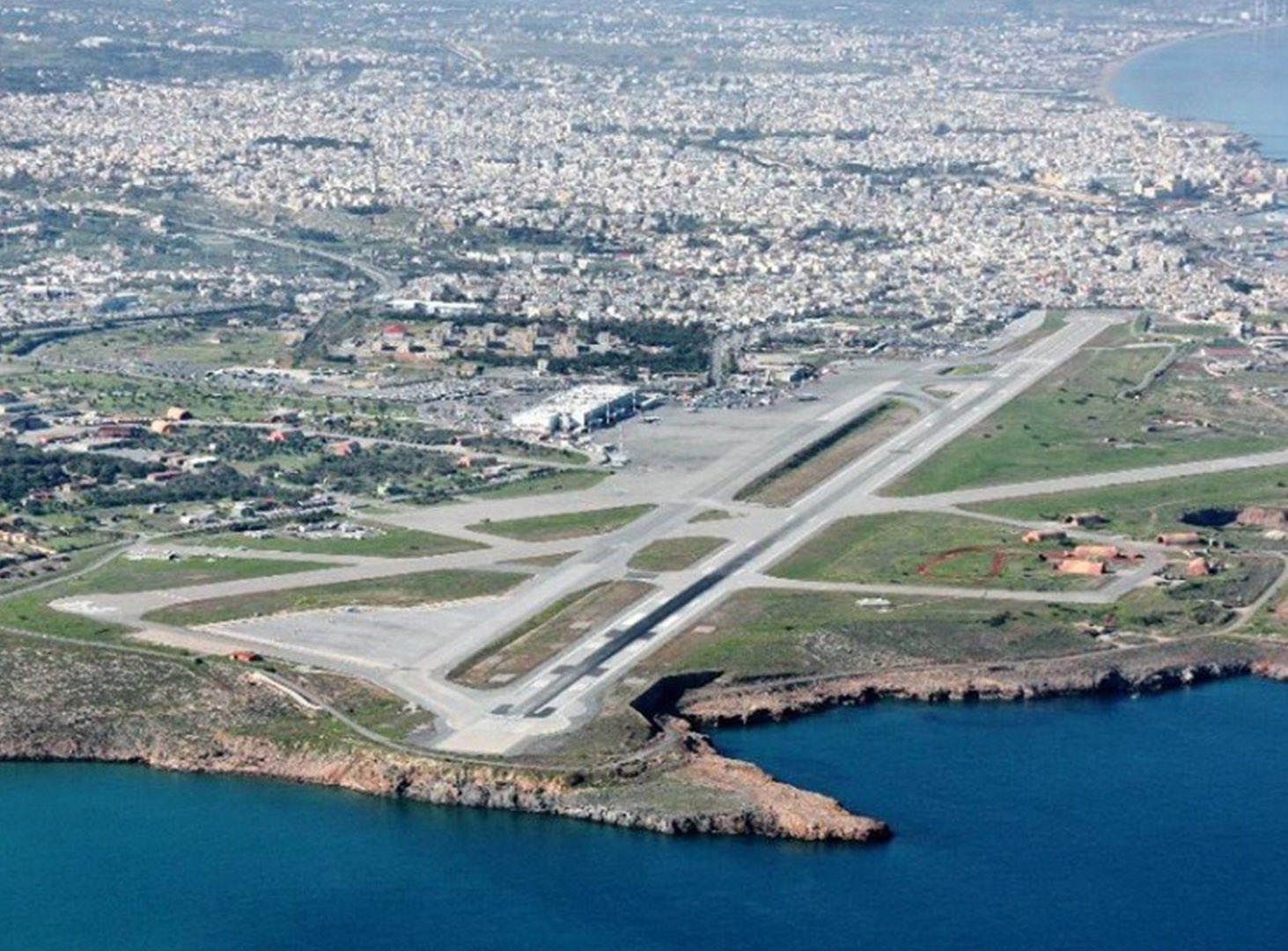 It is planned to complete the construction of the airport in five years: it should be open by 2025. The main five-story terminal of the new air harbor will be located on an area of ​​72 thousand square meters—a 30 minutes drive (approximately 25 mi) from the center of Heraklion. The airport will have a 12.467-foot runway and a parking area for ​​up to 300 planes. A large aircraft such as the Airbus A380 can land here. At the airport will be 11 special buildings to manage flights and infrastructure. It will be necessary to build a network of access roads and a 17-kilometer road to connect the airport with the A90-BOAK motorway. It is also planned to transfer settlements located within the runway zone: Archangelos and Roussochoria. 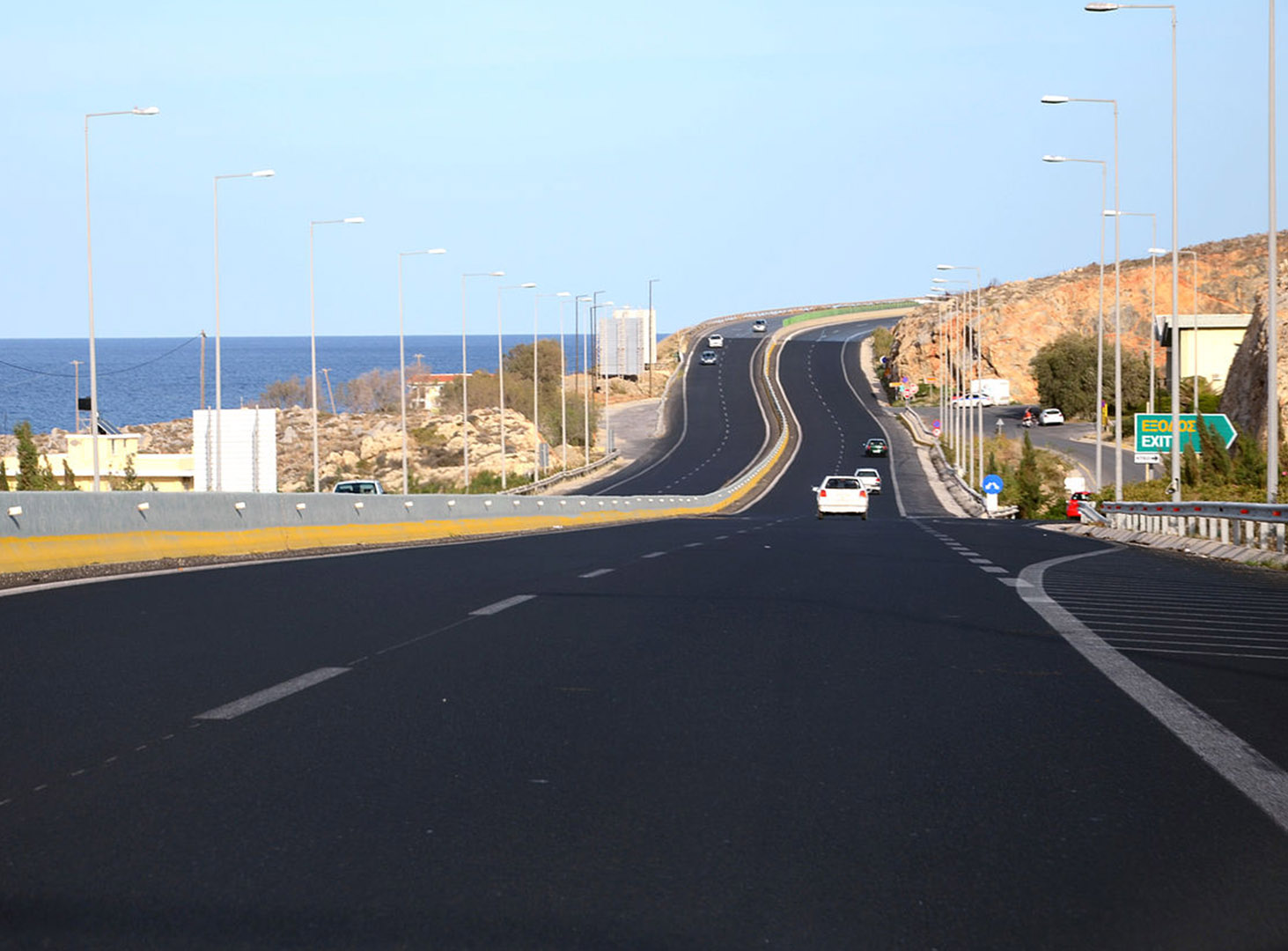 The total construction cost should be 517 million Euros. The European Investment Bank granted Greece a loan of € 180 million for a period of 28 years to support this project. The private sector consortium Ariadne Airport Group will be responsible for the construction, financing, operation and maintenance of the airport based on a 35-year concession. Ariadne Airport Group is a joint venture of the Greek firm GEK Terna and the Indian GMR airport Limited (GAL). The state reserves its controlling stake.

The new airport will be able to receive from 7 to 10 million passengers a year. 80% of the revenues of the new airport will come from abroad, mainly from large tour operators. Kasteli will help to expand significantly the geography and number of charter flights. It is expected that the airport will provide employment for 7,500 people, and also indirectly it should increase the jobs related to trade and tourism by 37,000 people.

Costas Karamanlis, Minister of Infrastructure and Transport, said: “The new airport plays a key role in the geopolitical modernization of Crete. It can become the country’s aviation center… Today’s start is only the beginning of new plans in Crete. It’s time for Crete to get the modern infrastructure that it deserves. The construction of Kasteli Airport and the completion of the BOAK motorway will change Crete”.

The Greek A90 motorway, also known as Βόρειος Οδικός Άξονας Κρήτης, (BOAK or Northern Road Axis of Crete), is a part of the primary national network of Greek roads. The highway is being actively reconstructed. As a result, four lanes of the road should stretch for 310 km: from the town of Kissamos in the west through the entire island to Sitia in the east.

In connection with the construction of a new airport, local residents and guests of the island have many questions, including what will happen to the old airport in Heraklion. Now it is the second busiest in Greece and the most important of the three civilian airports in Crete. The number of passengers in 2019 amounted to 8.1 million people. This figure far exceeded the passenger flow limit for which the airport was designed at the time of construction. 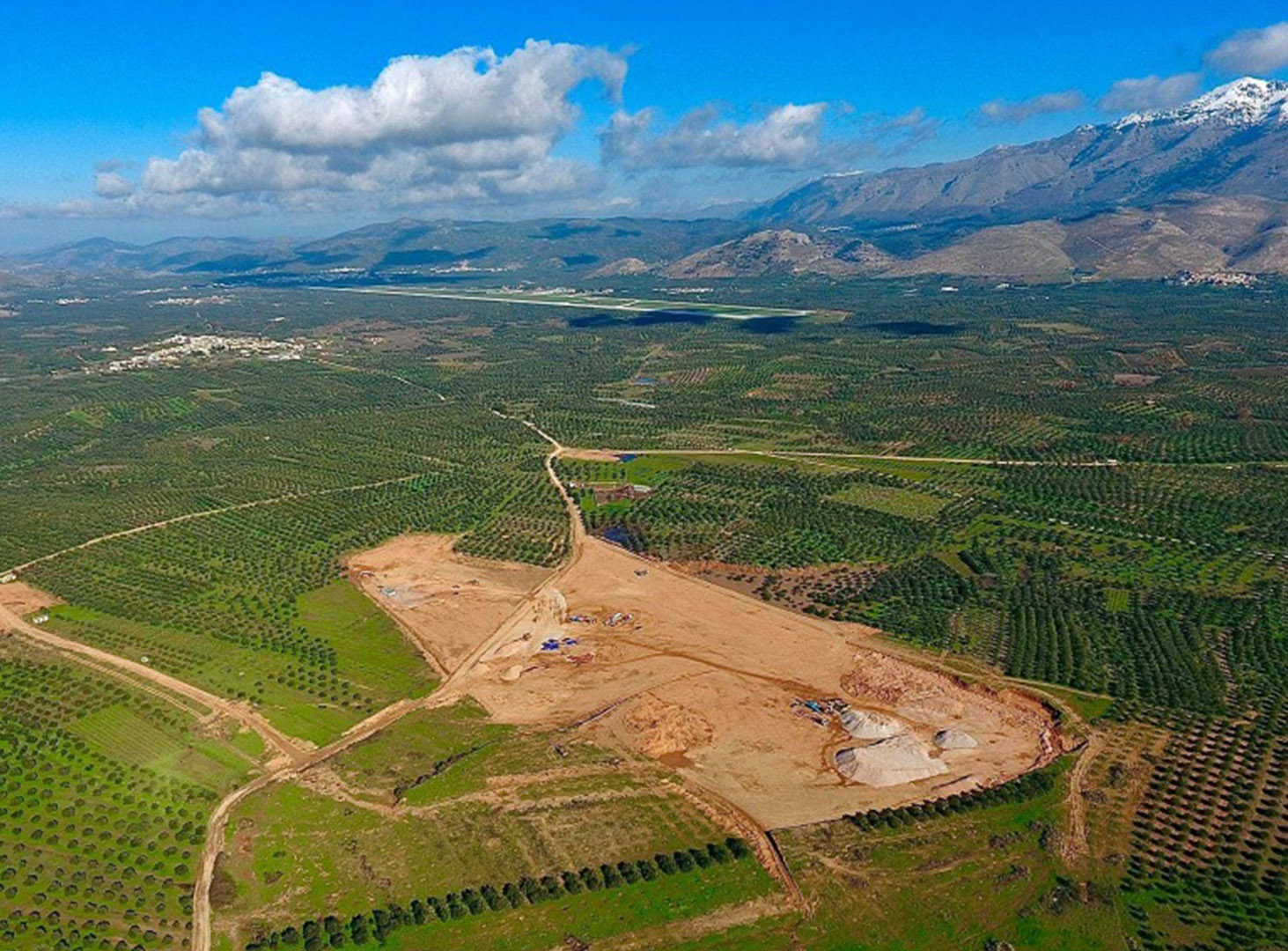 The full-fledged airport complex of Heraklion was opened in 1972. In 2018, only in five months, a complete reconstruction of the island’s main air harbor was carried out. After its reconstruction, the airport acquired all the attributes of a large one, but there is some confusion due to a concentration of passengers: the airport operates at its peak at the height of the summer season.

In addition, the airport is located on the seashore. In the off-season, proximity to the sea interferes with its planned work: due to the strongest winds, there are problems with the departure of aircraft and many flights are postponed to a later time or the next day. The location of the new airport in the center of the island should solve this problem.

The government currently believes that the current airport of Heraklion will be closed after the commissioning of Kasteli, and the 687 acre airport area will be returned to local communities for a large-scale city recovery plan.

Speaking on the radio in Crete and addressing this issue, the Governor of Crete, Stavros Arnaoutakis, emphasized that the government and ministries have never listened to the local community, which has its own plan (for the reconstruction of the territory), and he can offer interventions. The mayor of Heraklion, when asked if he intends to intervene with the governor of the region in the work of the relevant ministries to see the existing plan, replied: “I will consult with the governor of Crete, and we will do what, in our opinion, is necessary… It is necessary to inform and to make decisions in the interests of those who are concerned about such a serious problem as the operation of a large amount of property in Heraklion”.

A representative of the European Investment Bank, which provided Greece with a loan to support the construction of the new airport, said that he welcomes the commitment to reconstruct the existing area of Heraklion Airport, which would lead to economic, environmental and social benefits, and that this reconstruction was an integral part of the loan conditions.

We look forward to the further development of these crucial for Crete projects in at least five years.