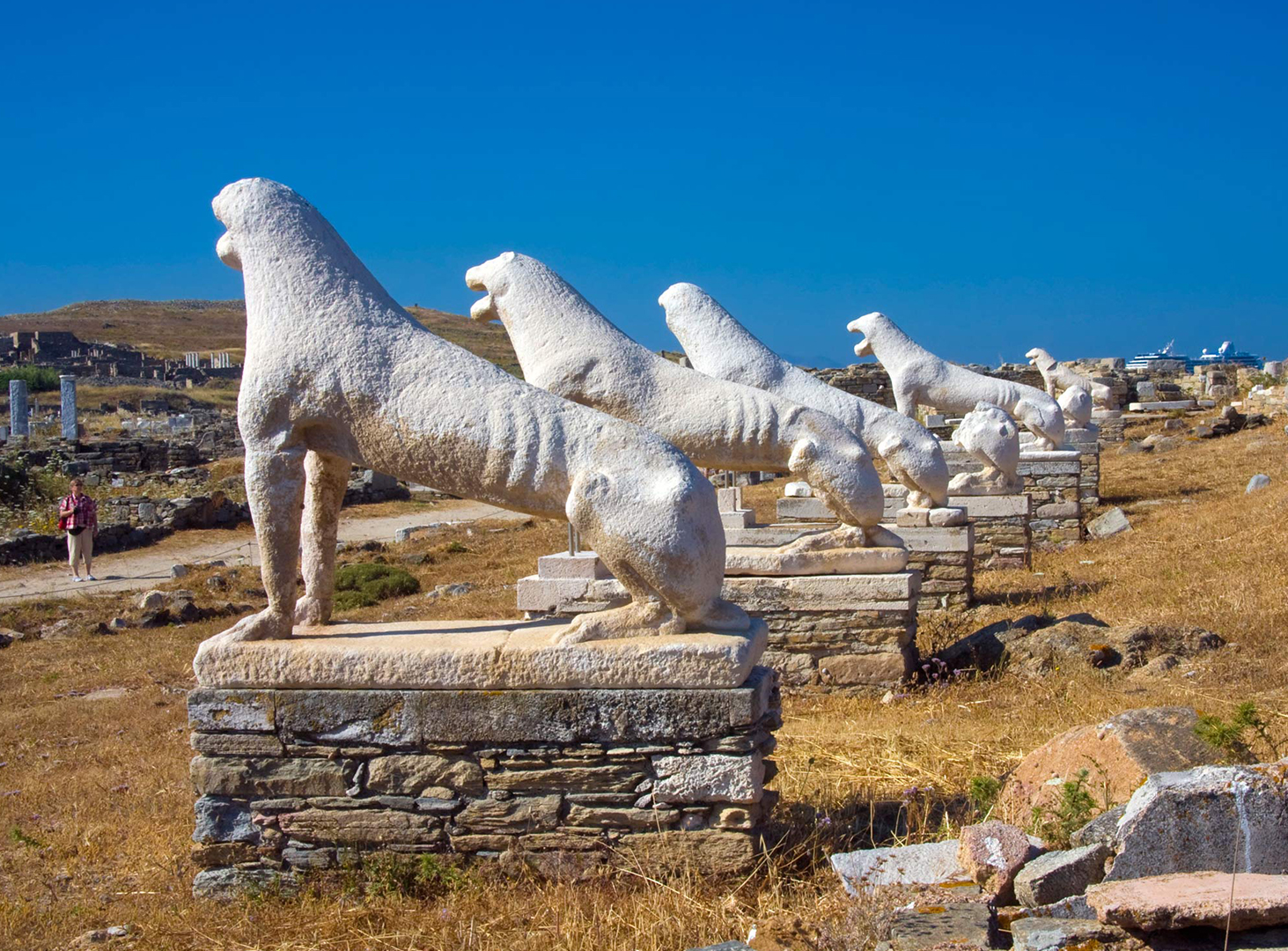 Writing about Greece and telling about its history, traditions and places of rest is not an easy task. Why? Because Greece is not as small as it appears on the world map.

The Republic of Greece consists of continental and island parts. Often, tourists, and not only they, are interested in how many islands are parts of the country, and which of them they can go to.

According to various sources, there are from 1400 to 6000 islands and islets in Greece. Between 166 and 227 of them are considered inhabited. The difference in estimates is due to the fact that a few people live on some of them. Only 79 islands have a population of over 100. But the coastline of Greece (along with the islands) has a fantastic length of 24,000 km!

The largest island of Greece is Crete, the fifth largest island in the Mediterranean. It is washed by three seas: the Cretan in the north, the Libyan in the south and the Ionian in the west. Although geographically Crete refers to Europe, it is located very close to Asia (175 km) and to Africa (300 km).

The second largest island is Euboea; it is separated from mainland Greece by the Euripus Strait. At its narrowest point, the width of the strait is only 38 meters, and there is a bridge there across the strait. Next in size are Lesvos and Rhodes. The remaining islands are much smaller: their area does not exceed ⅔ of the Rhodes’ area. 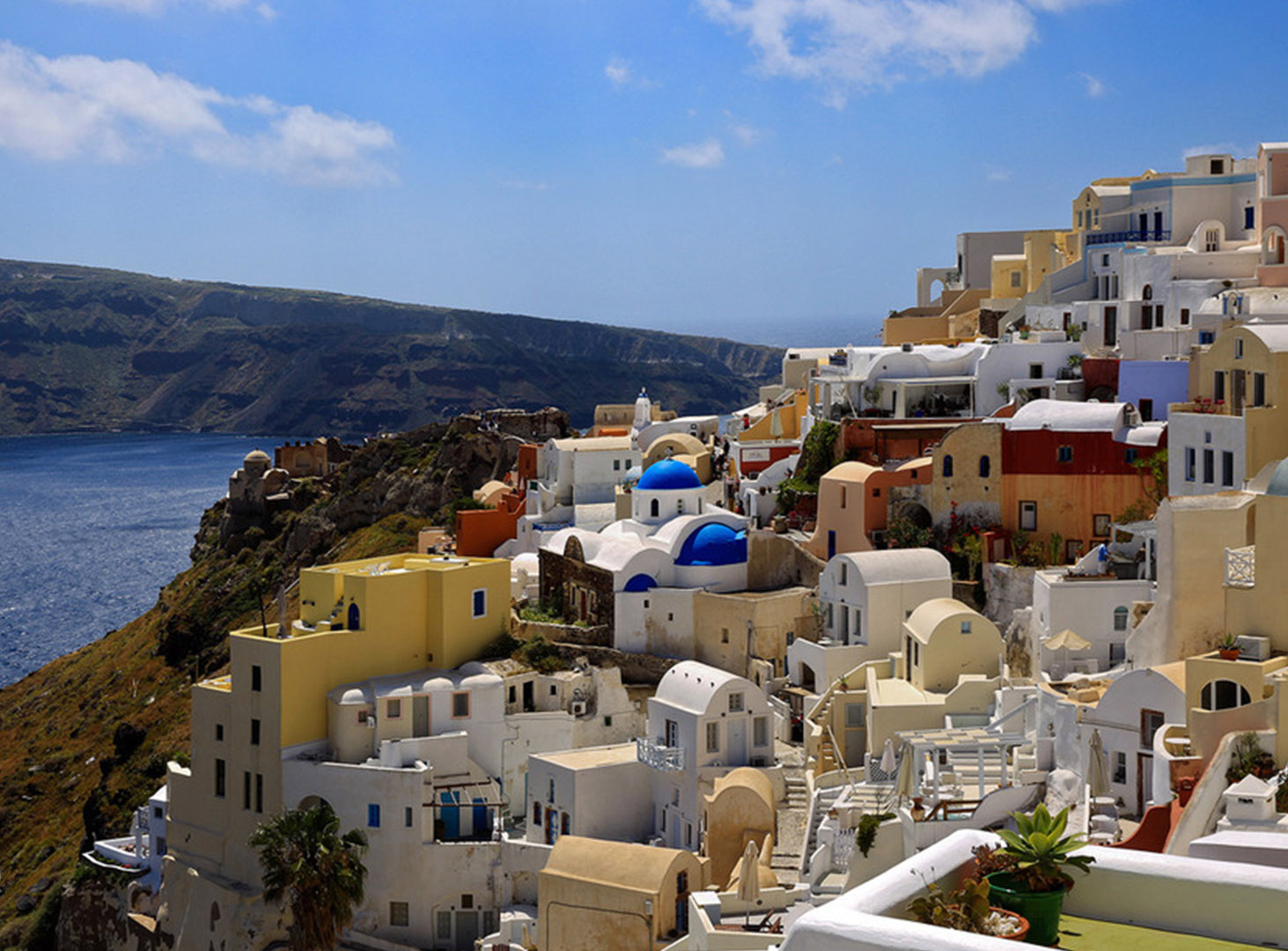 The fantastic islands of the Cyclades archipelago are the most popular destinations in Greece. They built an underwater threshold between the Balkan Peninsula and Asia Minor. According to the Greek mythology, the Cyclades are a brainchild of Poseidon: a legend says that the sea god turned Oceanids, the nymphs, daughters of the titan deity Ocean, into the Cyclades, because they angered him.

The entire archipelago consists of more than 200 islands, which are located in the central part of the Aegean Sea. The name of the archipelago comes from the Greek word «cyclos», which literally means “circular”, because all these islands make up an imaginary circle around the sacred island of antiquity—Delos. It is a certain center of a microcosm, around which all these planet-island revolve. 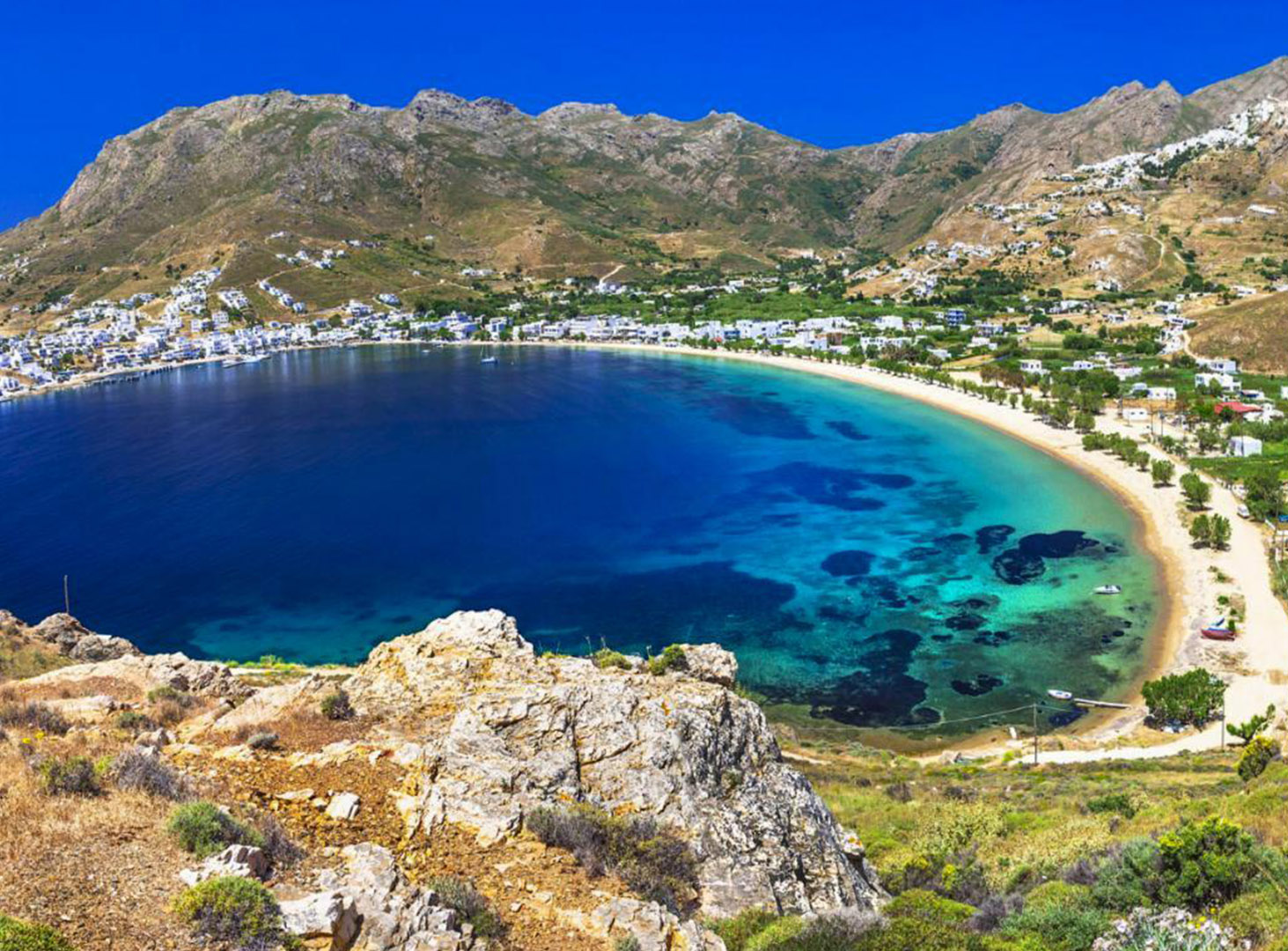 According to a legend, on the island of Delos, the god of light and arts Apollo and his twin sister, the goddess Artemis, were born. Their mother, the goddess Leto (Latone), was forbidden to give birth to children on the earth’s land. Such a ban was imposed by the jealous wife of Zeus, the goddess Hera. She threatened to destroy any place that sheltered Leto. Leto wandered for a long time until she turned to the inconspicuous floating island of Delos for help, promising to glorify it as a reward; and Delos gave Leto the opportunity to give birth to herchildren on its shores. After the birth of Apollo and Leto, the island of Delos became motionless. Moreover, Delos was a deserted island, but as soon as Apollo was born, everything around it lit up, and Delos turned into a rich and fertile land.

Another thousand years before Christ and during the next millennium, the island served as a major religious center of the Aegean. Here was a temple of Apollo. The island was decorated by many monuments: they were gifts brought not only from the islands but also from the Ionian cities. The island flourished for a long time. Once the population of small Delos reached 25,000 people (in the I century BC), but these days the island is uninhabited. It is a huge archeological space with exceptional monuments from different eras where immense number of tourists are flocking. 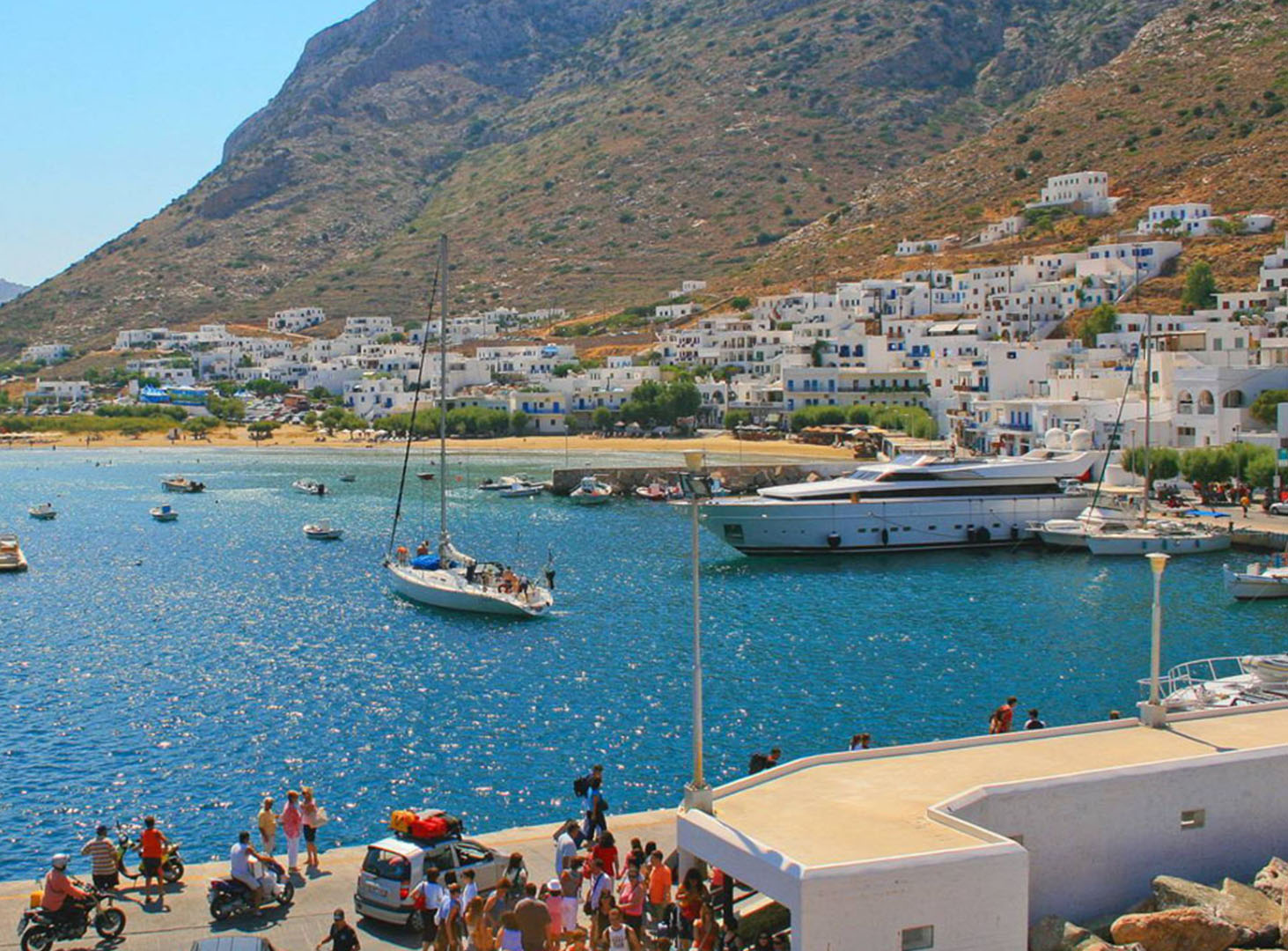 Cyclades have been inhabited since prehistoric times. The most famous from the Cycladic islands is Santorini. It is believed that Santorini was a part of the lost Atlantis. Around of 1600 BC a volcanic eruption occurred on the island, which destroyed the developed Minoan civilization in Crete and the island of Santorini itself.

Even one who has never been to the Cyclades islands recognizes Santorini by its white and blue houses in photographs. This style in Greek architecture was called Cycladic: from the name of the Cyclades archipelago, to which Santorini belongs.

There is another version, according to which the Cyclades were painted in white and blue. In 1936, Greek Prime Minister Ioannis Metaxas ordered to “paint” the Cyclades in such a way that the islands symbolize the white foam of the Aegean Sea and the blue sky: of course, with a hint of the white and blue Greek flag. Since 1974, it was an official rule to paint all houses in white and blue, which does not currently apply but remains as tradition.

Many people do not know that for several years the Cyclades belonged to Russia. This occurred as a result of a campaign of the Russian Baltic Fleet in the Mediterranean Sea in 1769-1774 during the Russo-Turkish War: its main events occurred in the Aegean Sea or, as they used to say, in the Greek Archipelago. It was the First Archipelago Expedition. In 1771, 31 Cycladic, Sporadic and islands in Saronic Gulf declared themselves as Russian territory. Unofficially, these islands used to be called the Archipelago Grand Duchy, which lasted until the signing of the Kuchuk-Kainarji peace in 1774.

In addition to Santorini and Delos, worldwide fame gained many other Cycladic islands with their unsurpassed beauty of landscapes and unique characteristics. Any traveler would like to visit Mikonos, Paros, Antiparos, Naxos, Ios, Syros, Tinos, Milos, Kea, Amorgos, Sifnos, Serifos, Andros, Kifnos, Kimolos, Anafi, Folegandros, Sikinos and Koufonisia. But to visit everyone, you have to travel for several years.

Cyclades are the embodiment of the dream of a wonderful vacation for thousands of tourists who come here every year. On endless beaches and in the crystal-clear waters of the Aegean Sea, with the sun shining over the magnificent islands, life resembles a fairy tale.