Skip to content
TheNewCrete > Recreation > On the roads of Crete, let’s take the car. Go? 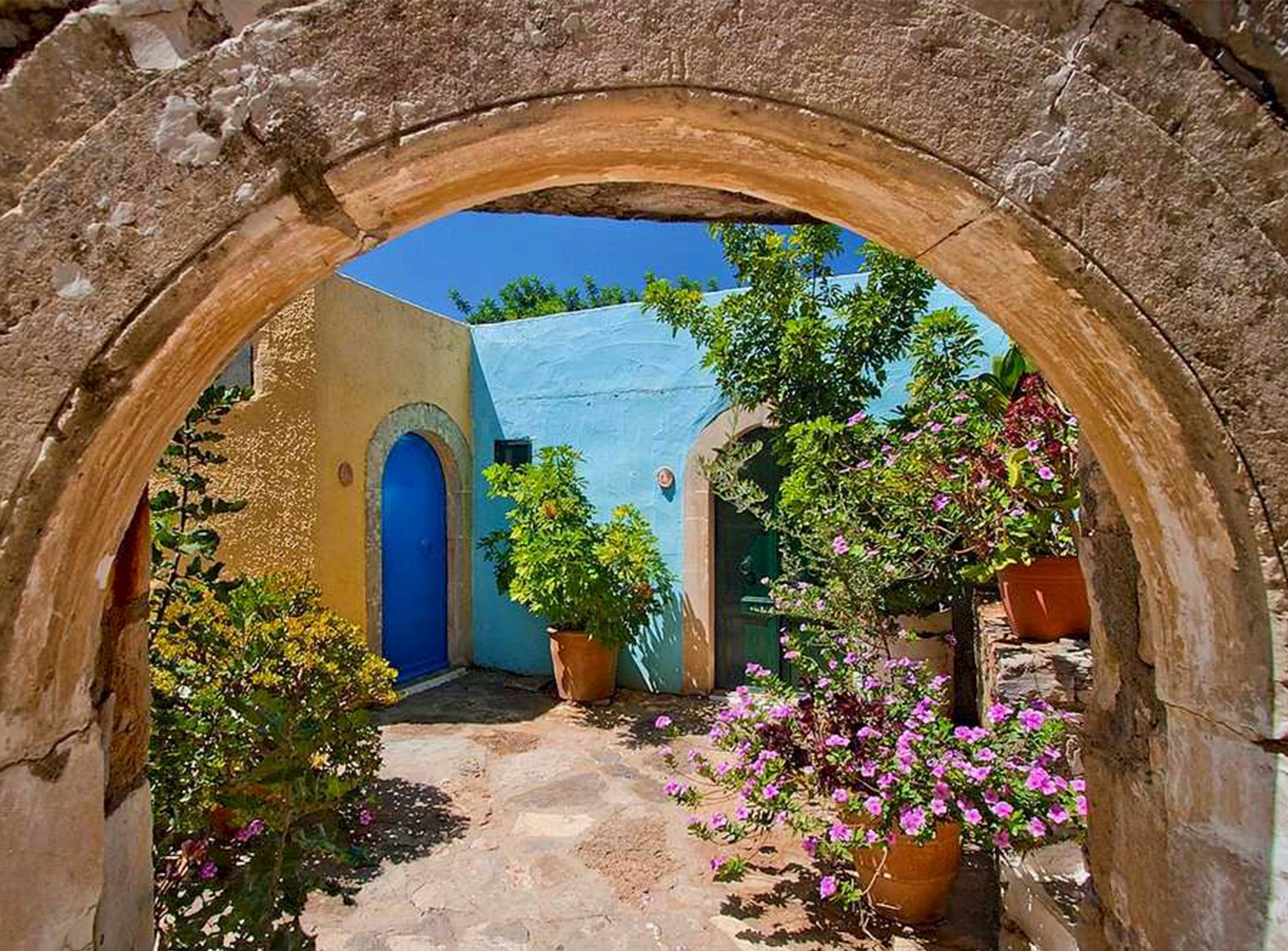 How many paths run under the foot of a tourist on the blessed land of Crete! How many roads are calling him, promising impressions and adventures? No wonder that he gets confused. That’s good when the Cretans themselves offer already arranged routes. Here is one of them – route number 6 recommended by the car rental company thenewrentcar.com

Dionysus, a stone bowl and Arolithos 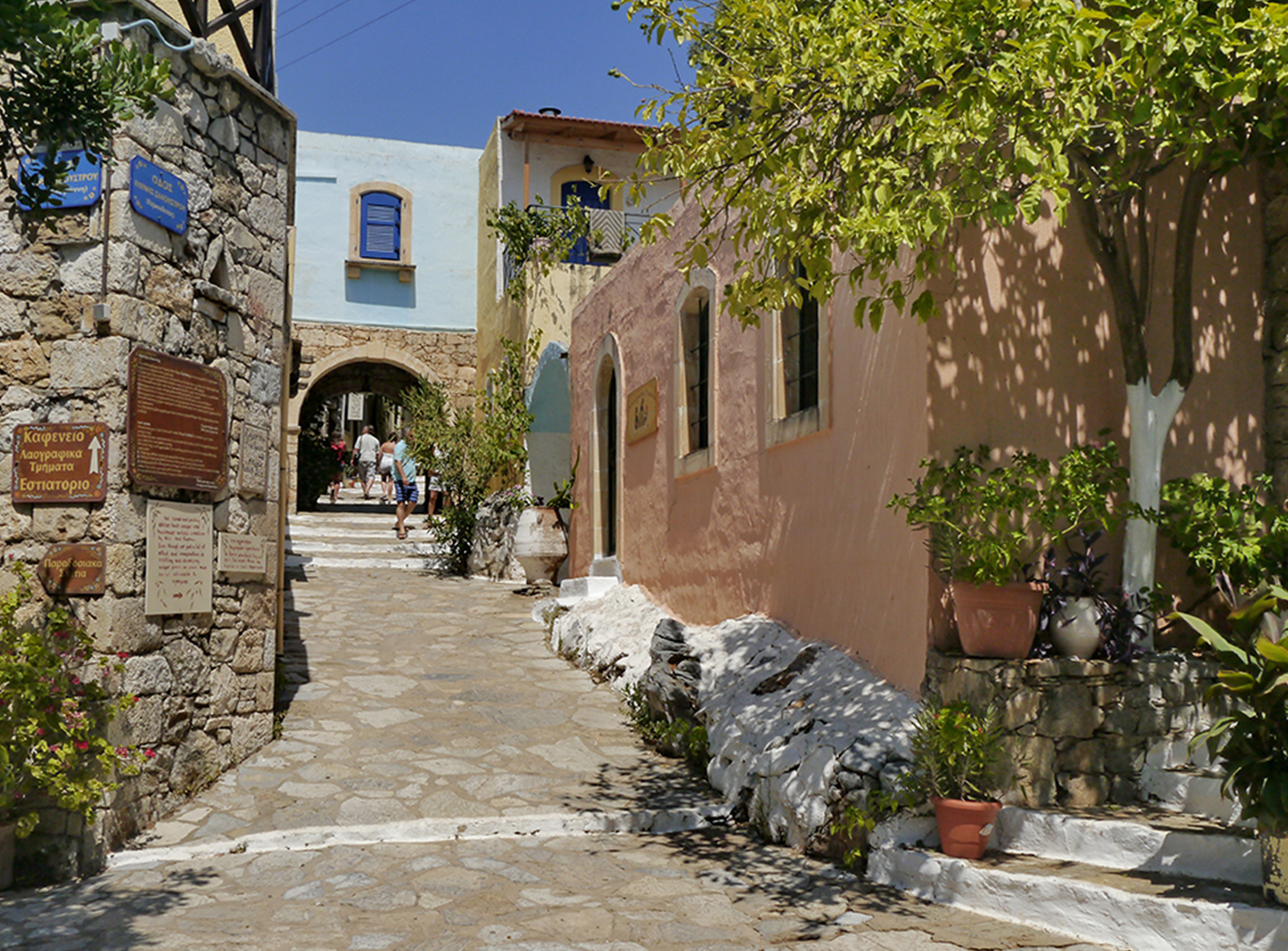 We start from Heraklion and the first stop point is a traditional Cretan village on the mountainside. Arolithos—this word means a big natural stone bowl to collect water; and the choice of this word for the village is not accidental: Arolithos is a gathering place, not only of water, but of Greek culture and traditions. In fact, the complex Arolitos, created in the 80s in the style of a small Cretan village, is an open-air museum showing the history of rural life and local crafts, clearly demonstrating the organization of village life on the island, its cultural appearance which is unknown for tourist and yang Greek urbanites. There are there not only ordinary rural houses, but also a church, a bakery, a blacksmith’s and weaving workshops, taverns, even a stone mosaic production studio and a small folklore museum, where Cretan household items, ancient agricultural tools, ceramics, textiles, and weapons are kept. Should I talk about tasty food in the local taverns there and homemade young wine?

In the evening, the streets of the village turn into one big platform with traditional Greek dances and music. In ancient times, during “Greek evenings” they honored Dionysus, the god of wine and fun, devoting their gathering to the harvest, but today this is a favorite entertainment of tourists who want for a few hours to feel the Greek zest for life and dance in a circle formation the famous sirtaki. By the way, the Cretans themselves also really like this place, and often arrange weddings in Arolithos, since there is enough space in the local taverns.

Anogeia is a unique village located on the slope of Ida mountain. If one believes the Internet information, you need to drive here from Heraklion an hour and a quarter.

During the World War II, the village (lost in the mountains) was one of the centers of resistance to the fascist troops, and in 1944 the Nazis completely destroyed it. But Anogeia managed not only to reborn, but to restore also its traditions of the past. Locals are as hospitable and cheerful as everywhere in Crete, but they are special people: they wear traditional Cretan clothing and speak a dialect using many ancient words.

The village is considered the center of rural weaving. Local residents are also engaged in embroidery and knitting. As a rule, the loom is located not far from the entrance to the workshop, and guests can see the loving and careful work of a craftswoman. The workshop itself is also a store where finished products (intended for sale to tourists) are hung inside and outside. By the way, the local women’s national costume is something special, and tourists can see many of its details only here.

An influx of guests in Anogeia falls on the last month of summer, when the “Musical August” festival is held here in honor of the composer and singer Nikos Xilouris. He was born, grew up and worked here, glorified his native village and Crete with his compositions. By the way, last December, on the concrete wall of the bridge at the entrance to Anoia appeared graffiti with the image of Nikos Xiluris, so that he seemed to be the first person to greet the guests of the village.

Underground Parthenon and the Room of a Lost Child

To get to Sfendoni Cave (28 mi from Heraklion), you will have to ride along the serpentine road, but the tourists who have come this way are unanimous: the road is not dangerous, and the views are breathtaking. The cave has free parking and an inexpensive cafe where you can wait for the tour to start: you can visit it only in a group (with an English-speaking guide).  There, you will go along the path with handrails among the cool stalactites and stalagmites like in a fairy-tale word. The backlight will hit the quaint “rocks”, “columns”, “influxes”, stopping the time, so that you can realize the growing of stone icicles one centimeter in 100 years! 100 or 200 years ago, at the same stones looked not only Greeks, but maybe also Minoans—thousands of years ago. 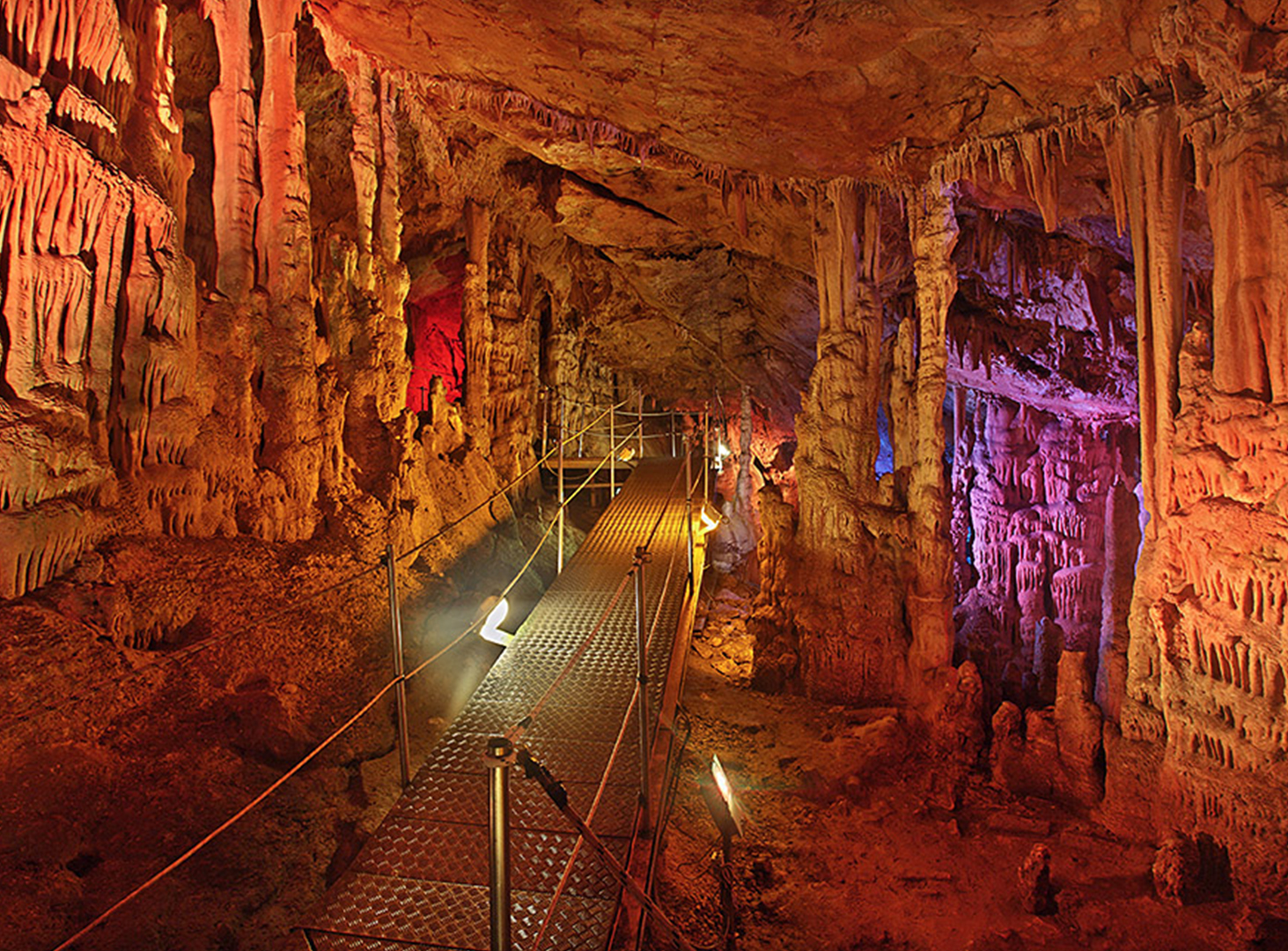 There are more than 10 halls there, but for visitors are open five. One of the halls is called the Parthenon because of the “columns” formed by joined stalactites and stalagmites, the other is called the Room of a lost child: once a child’s skeleton dated to the XII century was found here. Do not worry, there are no ghosts there, but bats, snails and other small animals make the cave habitable, unlike the others. So the cave is alive in all senses: lights flicker are playing a soundless music, stone icicles are still growing, and people come and go admiring unprecedented scenery.

About the softness of clay and the strength of traditions

The village of Margarites was originally not on our route: one of our readers recommended us to drop in, and it turned out to be the center of pottery.

It is a small village in the west of the island with only 300 inhabitants located 17 miles from the city of Rethymnon at an altitude of 300 meters above sea level at the foot of the Psiloritis mountain (one of the highest mountains in Crete). For centuries, clay has been mined in its environs, therefore, most of its inhabitants are potters, and most these families are real pottery dynasties. Workshops and shops are here everywhere; and everywhere a curious tourist can look for. An example is the workshop of Olga. She has been doing her job since she was 12, having learned from her father. She has 10 brothers and sisters, and all continue the work of their ancestors. 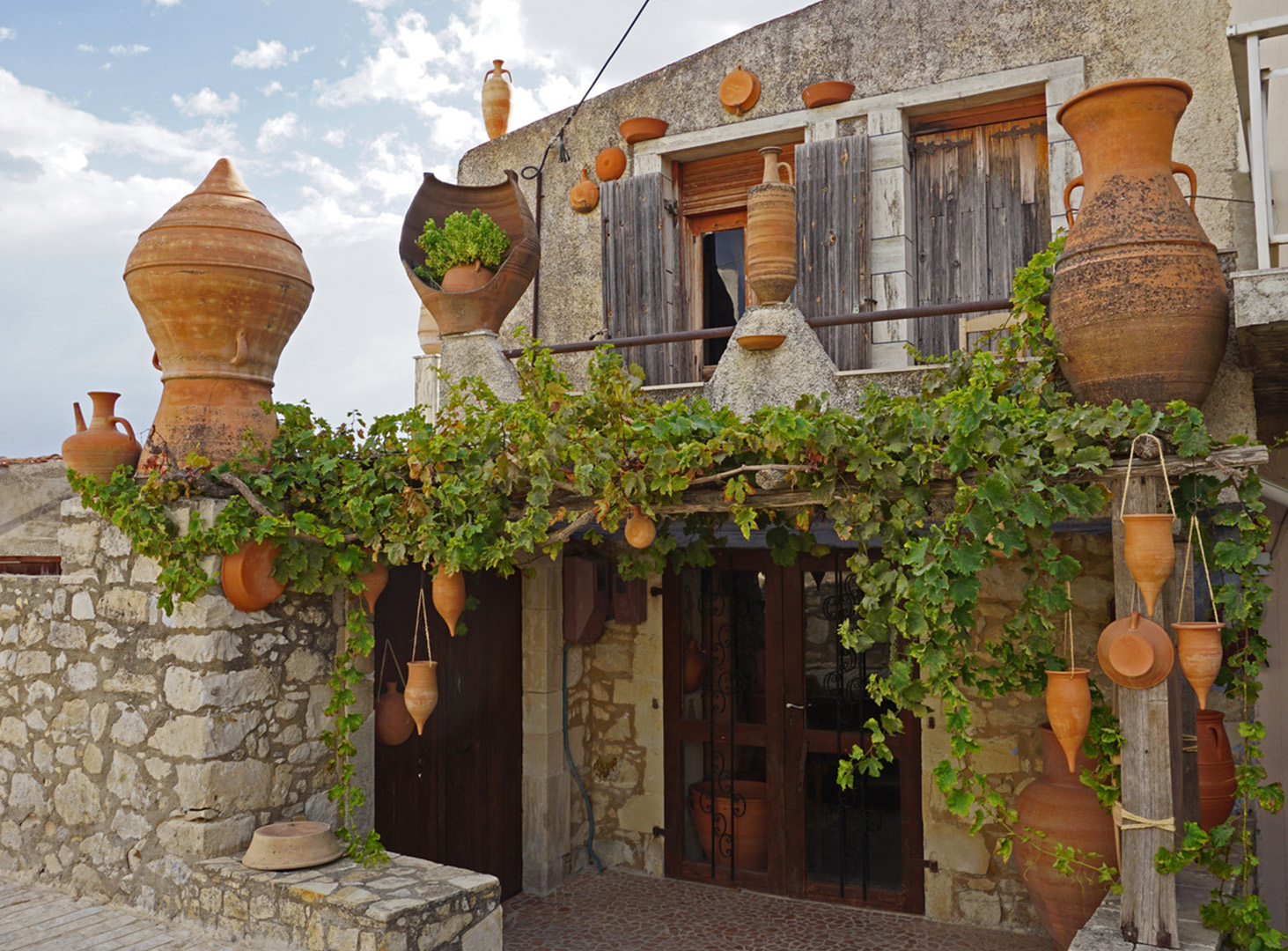 While the potter’s wheel is rolling, pliable clay takes shape, obeying the master’s gentle hands. Do you want to try how easy it is?—Sit down behind the potter’s wheel. The hostess will help you create your first vase or cup: perhaps being imperfect, it will be so dear for you.

Margarites is a typical Cretan village with stone houses, but some of them are unusual: survived from the Venetian times. The churches here are also not young dating back to the XIV century; and on the edge of the village is a monastery of the XV century.

After enough walking you can eat in the tavern “Mandalos”, for example. The word means in Greek the “gate”. Such a nickname was received by the grandfather of the present owner, a carpenter who once, meeting an order from a distinguished client, attached a latch to his door on the wrong side. To get a nickname in a Greek village is not easy: you have to earn it, and it is passed then from father to son and grandchildren along with the story associated with it,—so the owner of the tavern Kostas gladly tells his guests.

…In the shade of mulberries, or plane trees, at the tables with linen tablecloths, it is nice to relax; and when hot saganaki (fried cheese) and cool tzatziki (sauce) are brought, you won’t want to leave at all. But other stops of the route No. 6 are waiting for you: Melidoni Cave; a fishing village very picturesque with its bays, and the famous now resort town of Bali; Fodele, the native village of the artist El Greco and the quiet Ligaria…