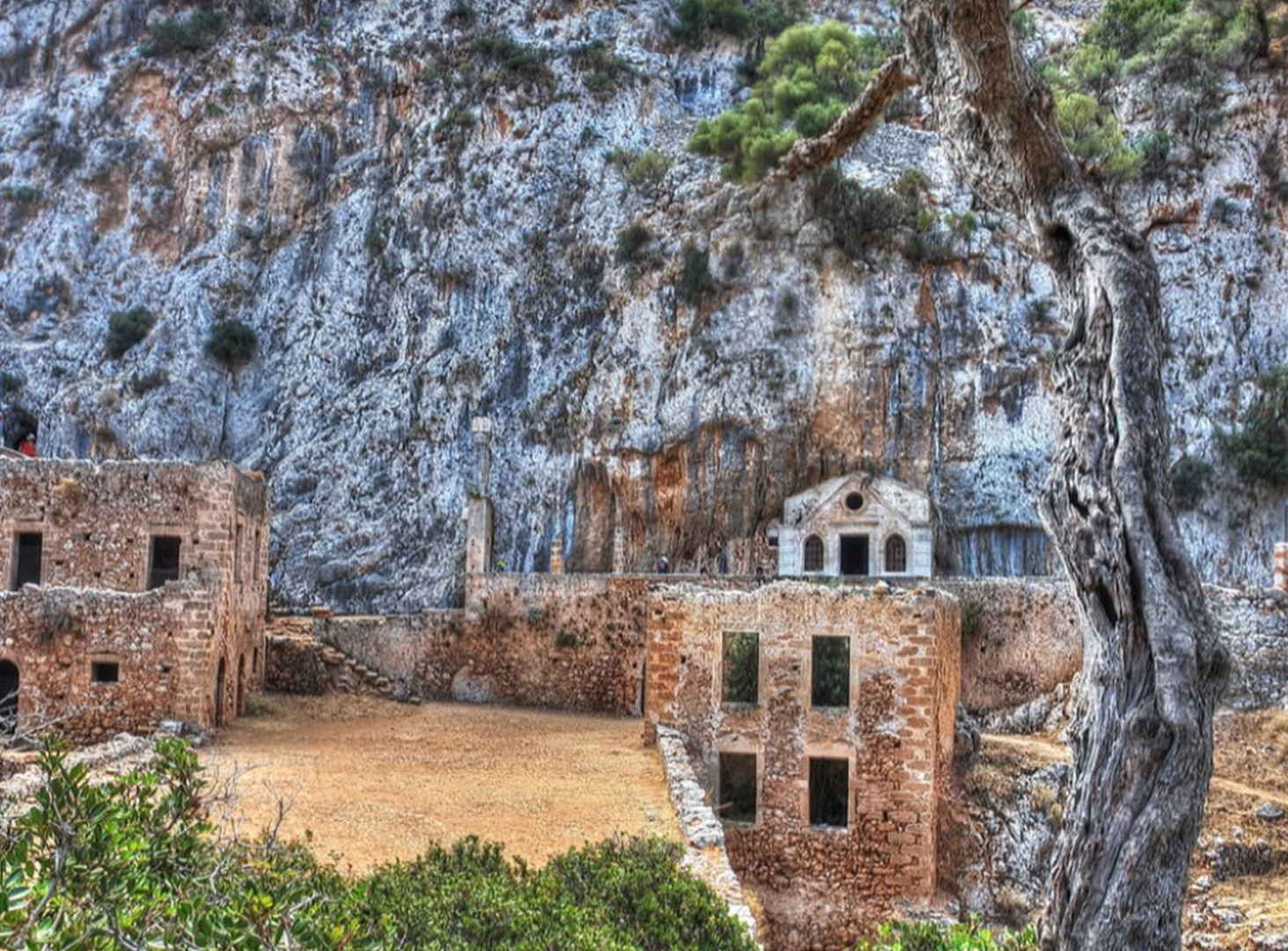 Saint John the Hermit is very revered in Crete. Arriving on the island, he and his 98 ascetic followers settled on the southwestern coast of Crete: in two large caves in a place named Azogires, which is lost in the mountains between Sougia and Paleochora.

Seeking even greater solitude, Saint John then left Azogires for the Akrotiri peninsula to live separately. Here, in one of the caves in the majestic and wild Avlaki gorge (20 km from modern Chania), the hermit spent his days in prayer. In solitude, he led such a severe ascetic life that from exhaustion he could only move on all fours in order to collect meager food.

A shepherd, hunting in the vicinity, once noticed an incomprehensible four-legged creature from afar and shot an arrow at him. The arrow hit the saint’s heart. However, the wounded man had enough strength to crawl to his cave, where he was caught up by the shepherd, who was following the bloody trail. The shepherd realized that he had mortally wounded not a beast, but a servant of God. He fell into despair and threw sobbing himself at John’s feet. Before dying, the saint managed to grant him forgiveness and blessed him to spend the rest of his life in repentance.

There is a legend that even before the death of John the Hermit, his followers from Azogires offered up a fiery prayer to God, asking him to die on one day with the saint and to go to the Kingdom of Heaven. The Lord fulfilled their request; and all of them almost simultaneously fell asleep for good to join their mentor.

On the site of the saint’s last refuge in the Avlaki gorge, the monastery of John the Hermit arose, also known as Katholiko. Secluded in the mountains, it is considered the oldest in Crete and is still a pilgrimage site. In the saint’s cave there is a chapel dedicated to him. The bridge across the gorge connects the church of the monastery with the opposite slope, where hermits, followers of John, lived in small caves-cells.

When pirates began to attack the coast, many monks had to leave this monastery, climb higher into the mountains and found a place for a new one—Gouverneto; and the monastery of St. John the Hermit is still abandoned, but you can get to it only along one path (30-45 minutes on foot, if slowly) using winding serpentine from the monastery of Gouverneto. Somewhere here, John the Hermit wandered barefoot in animal skin in the XI century and collected herbs ….

On the way to the old monastery of Katholiko is a cave with the chapel of Panagia Arkoudiotissa (derived from the Greek word “she-bear”, and the cave is named Arkoudospilio—a cave of the she-bear), where a stone she-bear is drinking from a lake. The name comes from the shape of a stalagmite resembling a bear. Traces of worship the goddess Artemis were found in the cave.

А steep staircase of boulders will lead you further; and in a few minutes you will see a stunning picture of the ruins of the Katholiko monastery. Against the background of gray mountains, there is the ancient stone bridge across the gorge and behind it a temple built into the bulk of the rock with destroyed monastery buildings around.

If you go a little further to the sea (a walk of 10 minutes), you reach the ruins of a port used by the monastery. It is a wonderful small and closed bay with a rock that looks like a ship. According to a legend, when the pirates landed on the coast to rob the monastery, its abbot cursed them, and their ship turned to stone.

Hundreds of pilgrims flock to Katholiko on October 7, the feast day of St. John.

John the Hermit and his 98 followers were officially canonized by the Patriarch of Constantinople back in 1632.

Externally, the monastery is very much like a Venetian fortress. Its dimensions are 40 x 50 m. It has 50 cells on two floors, four corner towers and special loopholes. The main temple of the monastery is dedicated to the Virgin Mary. Therefore the second name of the Gouverneto monastery is Lady of the Angels. Its cruciform church is without arches. The construction began during the Venetian era, but the work was interrupted by the Turkish invasion. It took many years for the temple to be completed after a special permission granted by the Turkish conquerors.

There is a small museum inside the monastery, which contains works of church art and other valuable relics.

Come to Crete and experience its beauty and history!

Professionals, English-speaking residents of the island will help you to decide what to see, to plan the best route and help you choose a car for traveling. Contact The New Crete: https://www.thenewrentcar.com/thenewrent/en/home.html