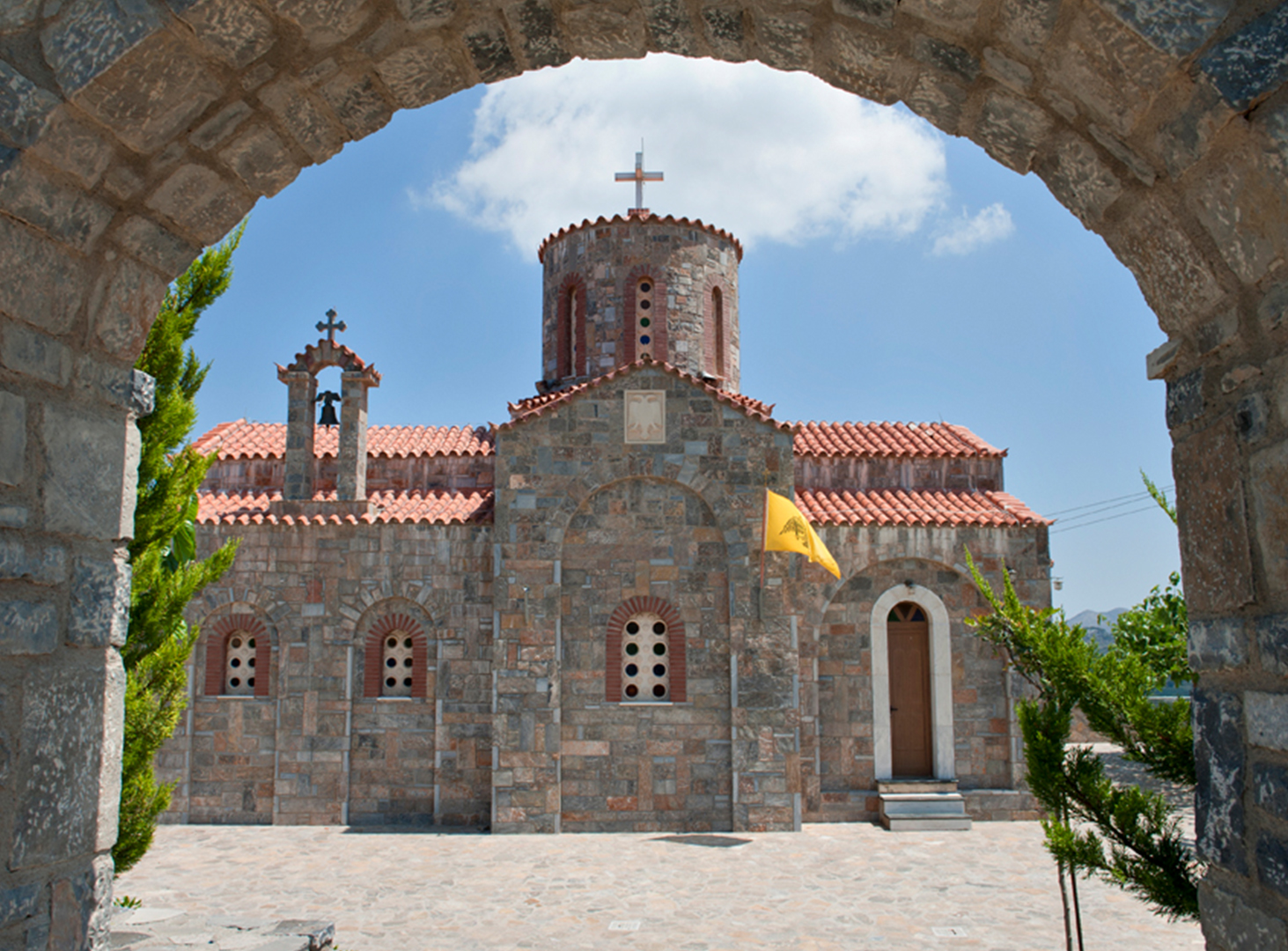 A friend of our newspaper and, perhaps, the best licensed Russian-speaking guide on Crete, an expert on the history of the island, PhD Stamatios Patelaros, told us about his ancient noble Cretan family. There were many famous people in it, whose life and activities are known far beyond the borders of Greece. This story is about St. Athanasius III, Patellarios, Patriarch of Constantinople (Tsaregrad), wonderworker of Lubny and Kharkov.

St. Athanasius was born in 1560 or 1597 near Rethymno on Crete, named Alexius and descended from a noble Greek family of Patellarios, akin to the imperial dynasty of the Palaiologoi. He studied at the famous Arkadi monastery that gave its students a comprehensive knowledge and solid Orthodox education: it was very important on Crete at the time being in the hands of Catholic Venetians. Alexius studied rhetoric, grammar and poetry, mathematics and astronomy, music and literature, theological sciences, spoke Greek, Latin, Arabic, Hebrew and Italian. 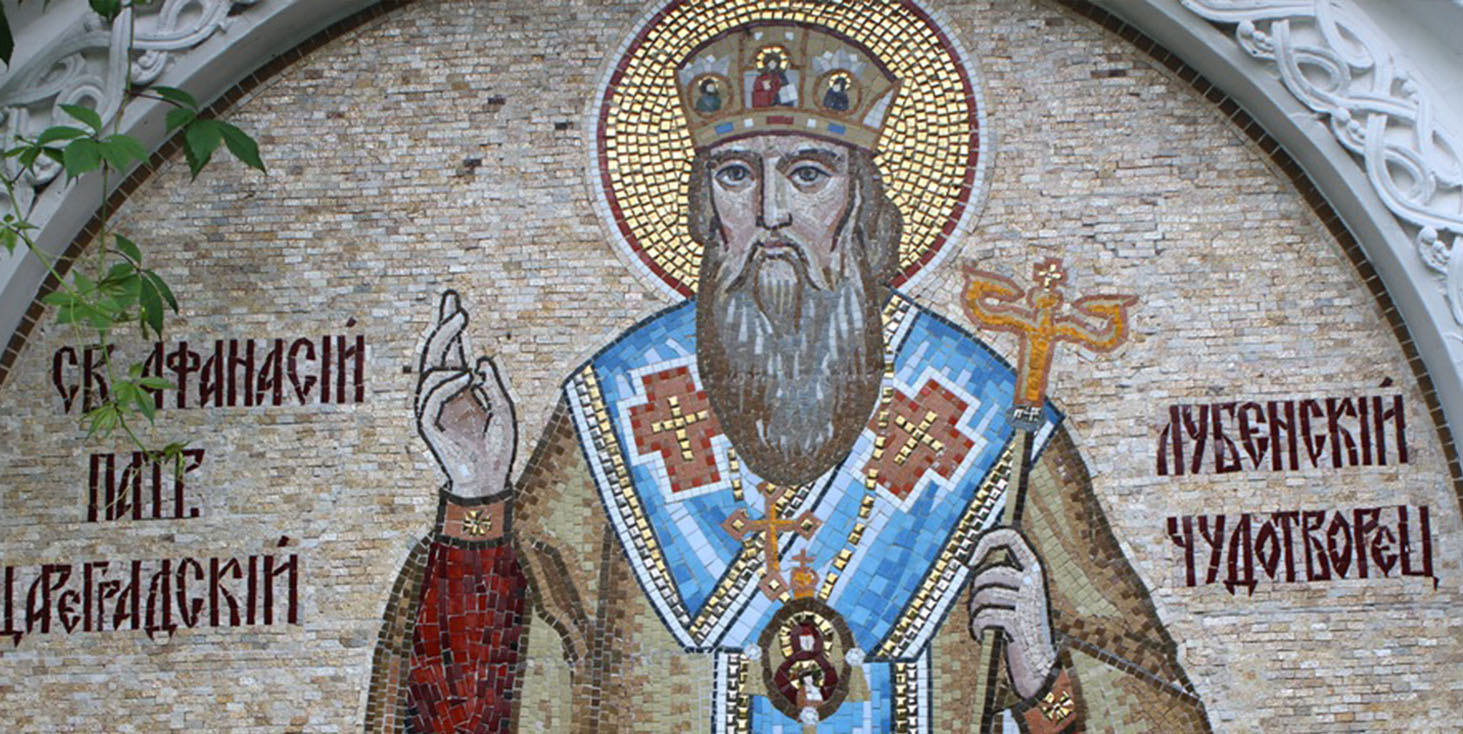 In his youth, he had a handsome face and an open kind look that disposed people towards him when they first met. A theologian, philosopher and poet by nature, he enjoyed great attention in the high society of Crete, and a brilliant future was ahead of him. But the noisy life of the nobles was not to the liking of the young man: the quiet pious life of the Christian devotees on Crete and the holy mountain of Sinai and Athos attracted him. Until the age of 26, Alexius lived on Crete, and after the death of his father he retired from the world in one of the Thessaloniki’s monasteries where he became a monk named Ananias; then he went to Esphigmenou monastery on Mount Athos. Here he spent time in strict abstinence, undergoing obedience.

Then he made a pilgrimage to Jerusalem, visited Palestinian monasteries. In one of them he took his second monastic vows and the name Athanasius. After returning to Thessaloniki, Athanasius was ordained to the priesthood. He spread Orthodoxy among the Vlachs and Moldavians, for whom he translated the Psalter from Greek into their native language. Soon Athanasius became known as an outstanding preacher, interpreter of the Holy Scriptures and a hymnographer, author of spiritual hymns in honor of the Most Holy Mother of God and some of the saints.

Thanks to his works in the Romanian lands, the sanctity of his life and his spiritual qualities, Athanasius attracted the sympathetic attention of the Patriarch of Constantinople Cyril I Lukaris, who appointed him a preacher at his Archdiocese: both were natives of Crete. In 1631, Athanasius was elevated to the rank of bishop and appointed to one of the main metropolises―of Thessaloniki. Mount Athos is located within its borders.

Against Cyril I, a group of disgruntled with Calvinistic ideas in his rhetoric was formed in 1634. Нe was slandered before the sultan and imprisoned on the island of Tenedos, and Athanasius was considered worthy to take his post. Catholic France, supporting his candidacy, helped with the most part of 60 thousand thalers, relying for the enthronement, and on March 25, 1634 he was enthroned for the first time, but after 40 days they returned Cyril I.

After that, Athanasius went to Athos, where he lived in solitude for over a year, fasting and reciting prayers. Later, at the place of his solitude, the Skete of Prophet Elijah was founded. Then he lived for a year in Italy, in Ancona and Venice, where the Pope offered him to convert to Catholicism, promising cardinal dignity, but he remained loyal to holy Orthodoxy.

In 1635, Athanasius was again enthroned in Constantinople, but a year later dethroned and exiled to the island of Rhodes. In 1638, Cyril I was strangled by order of the Sultan, and Athanasius was returned from exile as a contender for the patriarchal throne. However, Cyril II who studied with the Jesuits became the patriarch, and Athanasius again headed the metropolis of Thessaloniki from 1638. Because of a problem with payment of metropolitan taxes, he was again imprisoned and released under the intercession of Tsar Mikhail Romanov: in 1643, Athanasius was invited to Moscow, but on the way he fell ill in Moldova and remained there under the patronage of Hospodar Vasile Lupu. Athanasius founded there the monastery of St. Nicholas near Galaţi and lived here until 1651, constantly visiting Mount Athos and hoping to end his life there. However, at the beginning of 1651 he returned to Constantinople and on May 25 was again enthroned, but remained patriarch for only 40 days. Then, in 1652, he was enthroned for the fourth time, but stayed patriarch only 15 days: in one of the sermons he expressed his disagreement with Catholicism.

At this difficult time, Athanasius found support from the Russian Orthodox Church. In January 1653 he went to Moscow. He passed through Moldova and Ukraine, ravaged by the liberation war, where he was hospitably received by Bohdan Khmelnytsky. From him Athanasius received a personal request to Tsar Alexei Mikhailovich. In April 1653 he was met with great honors in Moscow by Patriarch Nikon, and then received by the Tsar. In Moscow, at the request of Nikon, Athanasius corrected Church books and wrote “The Ordo of the Episcopal liturgy in the East”, which formed the basis of the Moscow “Ordo of the Episcopal Service” used in the Russian Orthodox Church even now. He left records in which he tried to induce the Tsar to start a war with the Turks in alliance with Moldova and the Cossack Hetmanate, after the defeat of which the Tsar would occupy the throne of the Byzantine emperors, and the Moscow Patriarch―the one of the Ecumenical Patriach. Athanasius is allegedly known as a trader of indulgences which he sold in large quantities in Ukraine and Russia.

In December 1653 he set off on the return journey. It was as if Athanasius even took part in the Pereyaslav Council, and then, until the end of February, was a guest of B.Khmelnytsky. On the home way, he became seriously ill and was forced to stop at the Mhar Transfiguration Monastery near Lubny in the Poltava region. However, his disease worsened, and in April, Athanasius passed away. The abbot of the monastery and the Athanasius’ retinue buried him in the temple under the ambo, near the royal doors, in vestments and in a sitting position, as befits the rites of the Eastern patriarchs.

When 8 years after his death, on February 1, 1662, his tomb was opened, they saw the incorruptible body. “Оnly on the right hand, holding the staff, there were no two or three fingers. All clothes fell off and sank, the chair rotted. All that remained were the epigonation and the staff. ” Subsequently, he was canonized, and his relics were solemnly placed on the right side of the cathedral. The body of the saint was clothed in new vestments and opened to worship. The unusual for Russia burial of St. Athanasius in a sitting position caused him to be called Athanasius the Sitting. 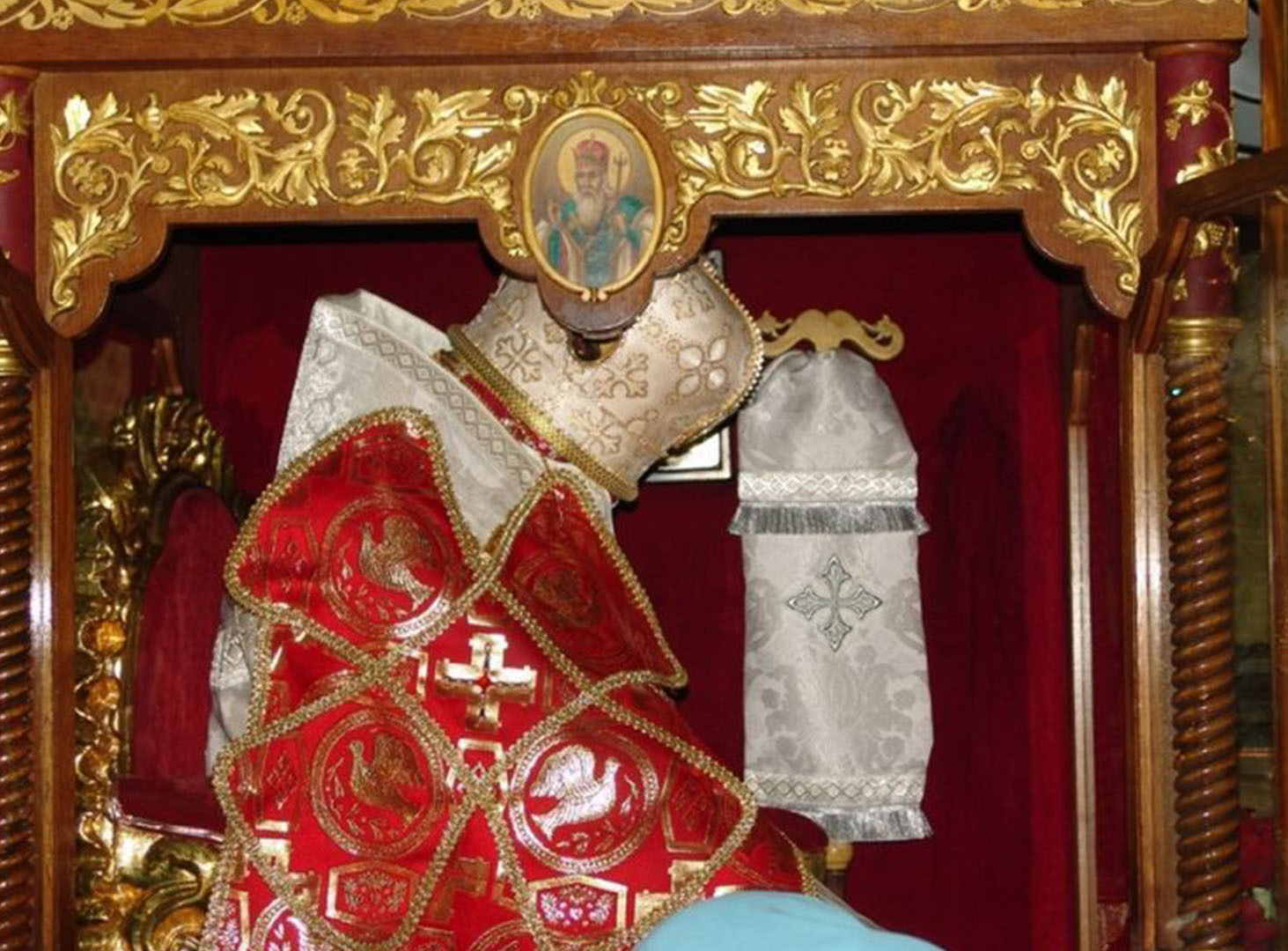 Fame spread on the healing abilities of his relics, and thousands of people walked faithful to the Mhar Monastery with hope.

It continued until the revolution. In 1922, in Lubny, as well as throughout the Ukrainian Soviet Republic, the seizure of church property began: it was necessary to revive the country after the war. At first, it was happening quietly. But when the people’s commissar came from Kharkov demanding to remove Athanasius’ reliquary (it was of pure silver, weighed 151 lbs), then the population from the whole Poltava region went en masse to the monastery. Thousands of people surrounded the cathedral and did not allow the commissars to approach the relics of the Saint. The church service went on around the clock; the priests replaced each other every 3-4 hours. The people arrived daily, despite the military exercises around the monastery, ordered by the authorities. 3 thousand soldiers, maneuvers with machine-gun and artillery shooting did not frighten the flock: the services continued, and the people did not disperse. But it was the harvest time, and the believers one by one went home. The monks themselves transferred the relics of Athanasius to a wooden coffin, and the commissars brought the silver reliquary to Kharkov, the then capital of Ukraine. In 1936 the relics of the Saint were also transferred there. In 1939 the Politburo abolished all resolutions on persecution of the church, and the relics of Athanasius were preserved in the Historical museum of Kharkov city.

During the Great Patriotic War, in 1943, the Cathedral of Annunciation in Kharkov was reopened, and the relics of St. Afthanasius were transferred there. Currently, they are located in a specially arranged reliquary in the right nave of the Cathedral where weekly Thursday special evening services are performed.

In 1993, a part of the relics (a fragment of the finger) of the holy Saint was transferred to his home on Crete, the ancient village of Axos at Rethymnon. In Greece, it was established the day of his memory―August 21. In 2008, thanks donations, it was built the new Church of the St. Athanasius Patellarios, in which these relics are kept. 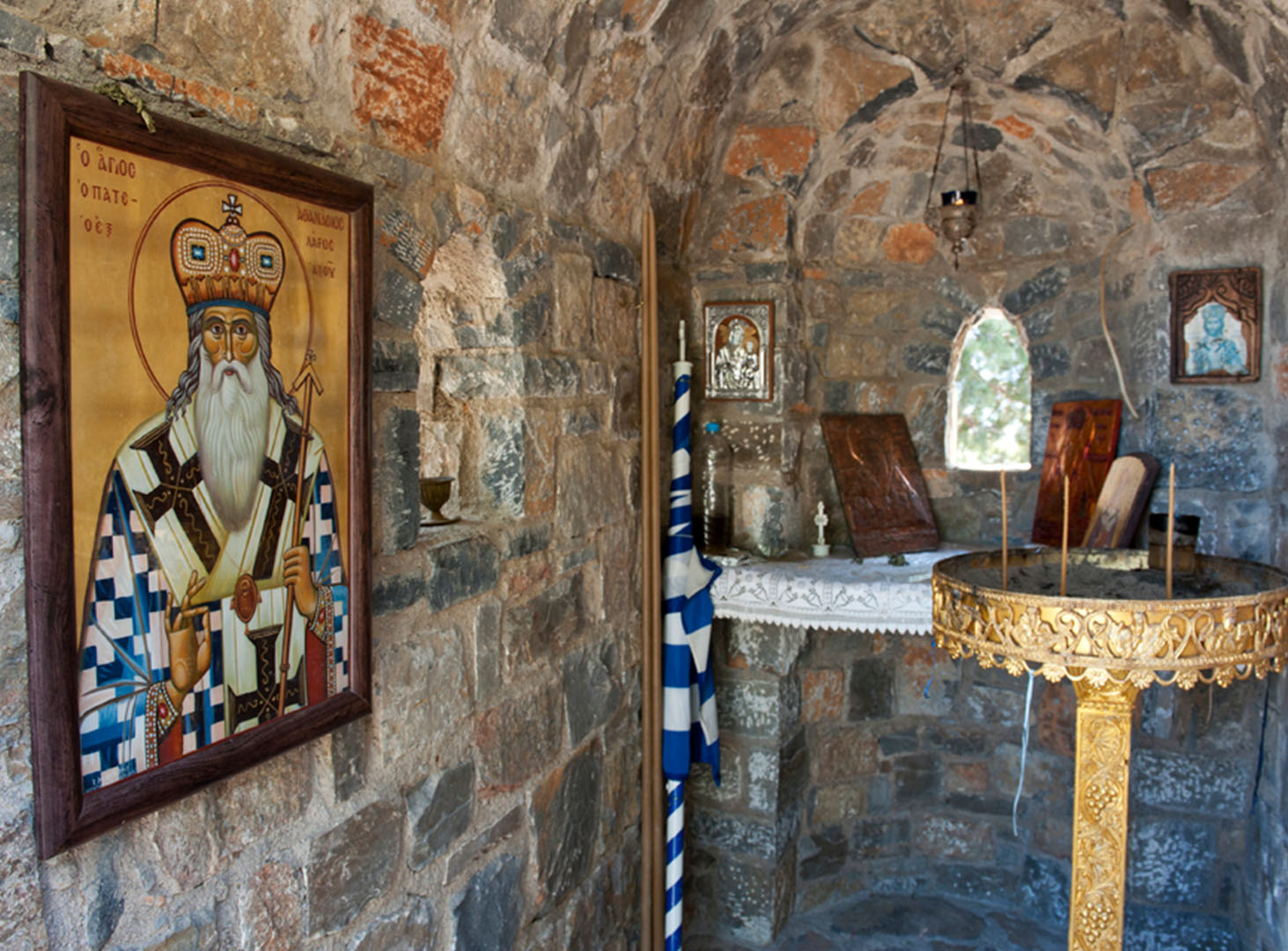 The article used texts from “The life and Akathist to St. Athanasius the Patriarch of Constantinople, the Wonderworker of Lubny”. Publishing House of the Kharkov Diocesan Administration of the Ukrainian Orthodox Church, the city of Kharkov, 1998.