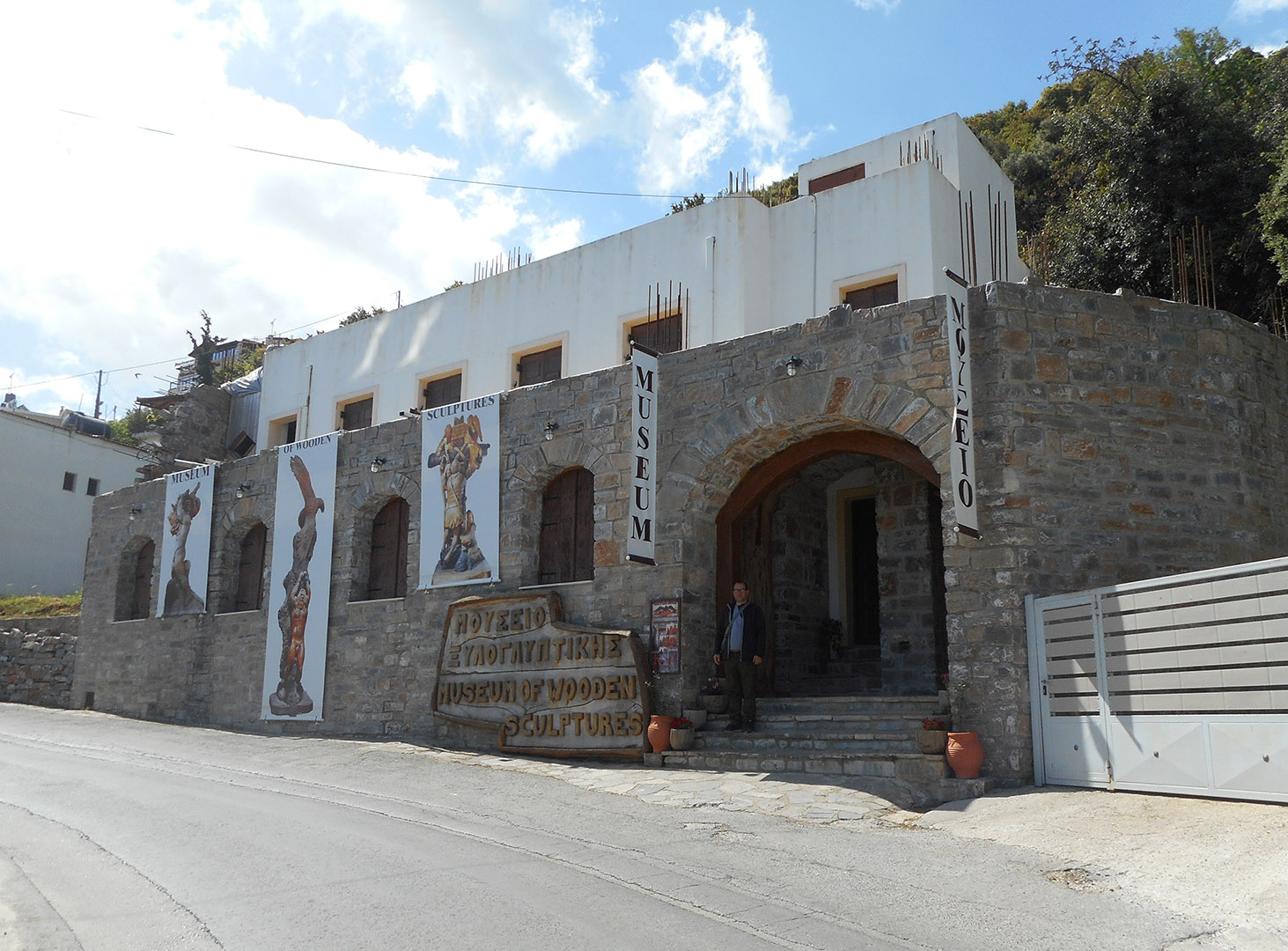 Of course, you remember Pan with a pipe, the charmer nymphs ― the naiads, the Nereides―from the myths of ancient Greece. In perceptions of the ancient Greeks, the sea, the forest, the mountains were inhabited by beings that looked like people, and in each tree or stone was hidden its own peculiar life. A Master, who dared to touch a natural material with his chisel, had to listen to this life, to see an image in it to be able to cut off correct all unnecessary from a stone or a piece of wood. Polytheism has gone down in history, and Pan no longer plays his flute, but respect for the living and awe at the act of creation are absorbed by the Greeks with their mother’s milk.

…An eagle clutching a serpent in its claws sank down to the ground at the foot of the sacred mountain Psiloritis in the settlement of Axos. It has a wingspan of six meters, and you want to touch its every feather. Is it really made of wood? The author of this wooden sculpture in the center of Axos is the Master who is able to see the life in a piece of wood―Georgios Koutantos. 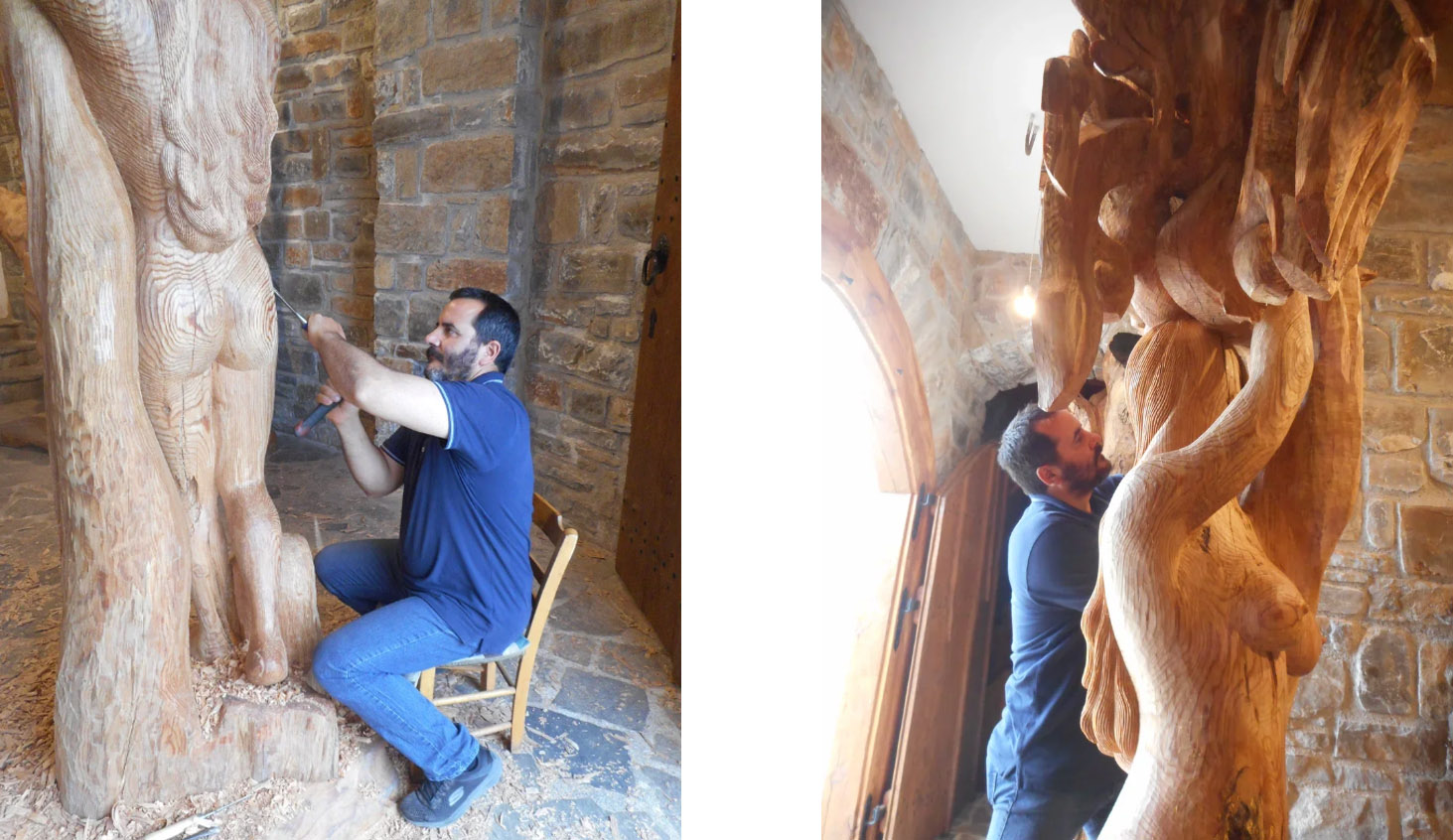 At the age of nine, he first picked up a soft clay ball and…

Maybe he felt a call of his ancestors? Maybe he felt the same trepidation of the creator, who was familiar to Phidias? Whatever it was, the young Georgios began to make small figures of clay, gypsum, stone, and then of wood. He mastered all the basics of working with wood on his own, guided by his natural talent and flair. Thanks to the incredible perseverance and support of his family, by 2001 he had enough talent to create “the Eagle and the Snake.” After this sculpture was installed in the center of his native village, the self-made master became known in Crete and began to think about turning his hobby into profession… The result of his tireless twenty-year work was a collection, which is now in the private Wooden Sculpture Museum in Axos, opened in 2010 thanks to a subsidy financed by a special program of the European Union.

On 480 square yards of a large two-story building, there are more than 200 sculptures up to six meters high. The most amazing is that all of them are made with just two tools―a hammer and a chisel. Do you not believe?

The master himself can show miracles achieved by his penetration into the interior of the tree: his workshop is in the same building. As materials, Georgios uses different tree species: eucalyptus, pine, olive and lemon. All them are from different regions of Crete: basically they are huge trunks felled by a strong wind. The Cretans rush to inform Georgios about them, and if they suit him, he bays them (in Crete every tree has its own master!) and transports them to the museum building. It is very important, the Master says, that the tree should fall in the “right” season (January or August), as well as in the second phase of the lunar cycle, when the moon is waning. Only then the tree will retain its shape after decades and will not be destructed by an invasion of insects: if the moon is waning, the tree-juice goes back to the roots, and the wood dries out very quickly, becomes very dense and strong.

It is impossible just to run through the museum because each composition has a plot and a fascinating story: Prometheus or Hercules; Christ being taken down from the cross. How can you walk past? Others are related to the Cretan wedding, the artist’s fellow villagers, to the Cretan customs or to his family. Many works are made of a single piece of a tree, and it is difficult to believe in it, seeing the incredible complexity of the compositions and their details. The sculptor himself conducts gladly excursions and tells about the creation of one or another work, used technologies, and explains Cretan traditions.

The exhibition is constantly updated: the master continues to work and participate in many exhibitions. One of the most expensive for him was the participation in 2014 at the World Festival of Worldwide Architects in China, where the world best sculptors from 70 countries were invited, and Georgios represented his native Greece and Crete.

If you decide to visit the museum, the most convenient way to do this is on a rented car. For coming from Heraklion, the control point-villages are: Gazi – Tylissos – Gonies – Sisarha – Anogeia – Axos. For coming from Rethymno they are: Panormo – Perama – Dafnedes – Mourtzana – Garazo – Kateriana – Axos.

By the way, in the immediate vicinity of Axos, there are Sfentoni cave near Zoniana, the Monastery of Discouri (near Kateriana) with the miraculous icon of St. George the Victorious, revered by the shepherds, and the village Anogeia: a traditional Cretan village, with grandmothers needlewomen and a site of destruction during the German occupation.