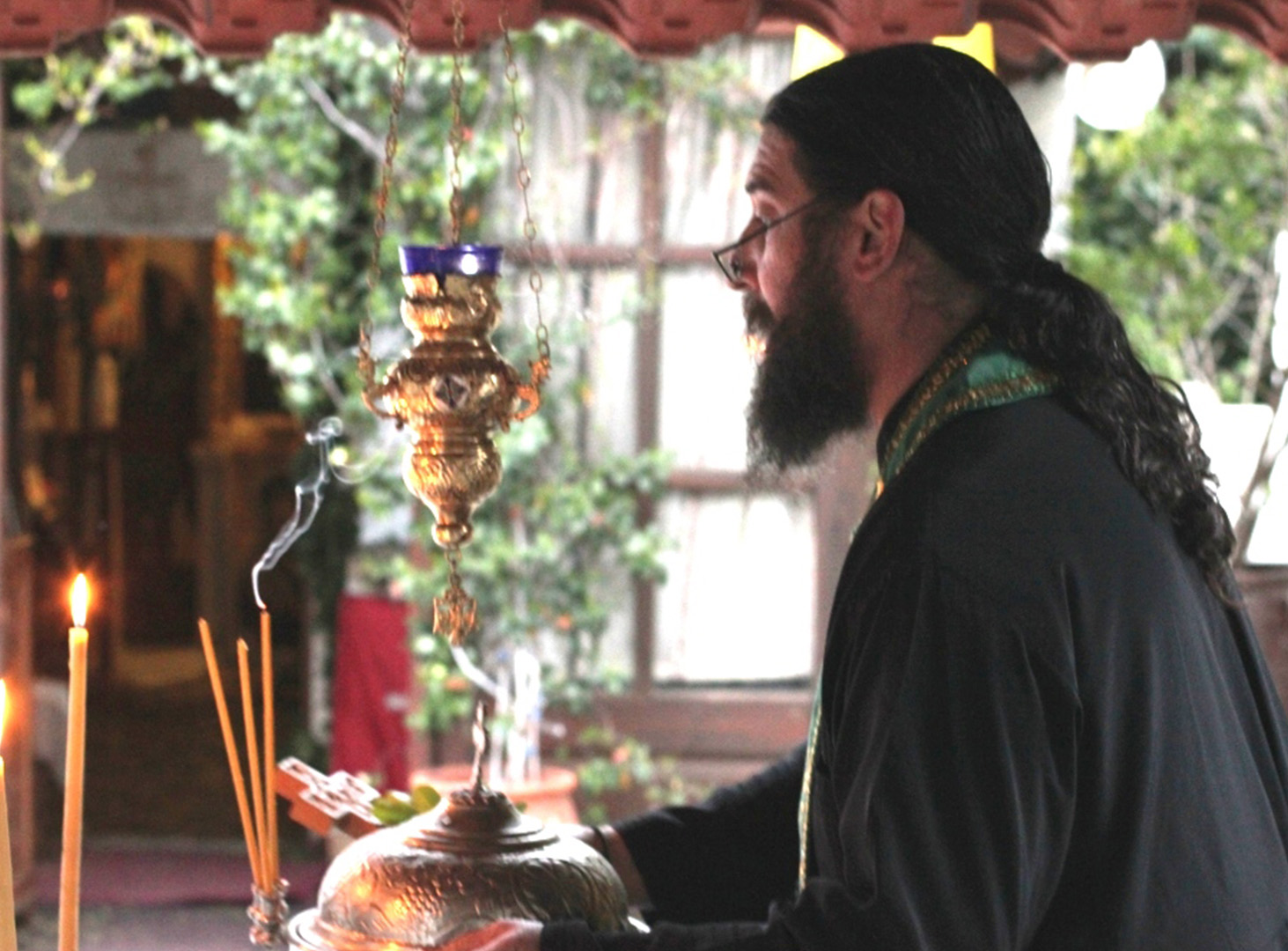 In Greece and especially on Crete, April 23 is usually celebrated as the day of St. George the Victorious. Why “usually”? – Because this year the holiday falls on Great Tuesday of Holy Week, which means it will be transferred and celebrated on April 29, right after Easter. Why “especially on Crete”? – Because on Crete the most popular name is, Georgios, Yorgos, according to statistics; and since in Greece name days are celebrated on a much larger scale than birthdays, the feast of St. George becomes one of the largest religious celebrations.

St. George the Victorious is one of the patrons of Crete and the main patron of the shepherds. There is not a single church without an icon of him, and there are dozens of monasteries in his honor. Today we want to tell about one of them, the Monastery of Diskouri, which is not the most famous, but, nevertheless, has its own unique history and about an icon of St. George the Victorious on Crete, the only one of its kind there.

It is located in the eastern part of Mylopotamos (Rethymnon area), near the sacred mountain Psiloritis (on top of which is the Timios Stavros church belonging to this monastery), between the villages of Veni and Livadia, near the village of Axos, where in ancient times was town of Axos, one of 100 Cretan city-states (like Knossos and Phaistos, during the same period). It had its king and his palace.

The exact time of monastery’s construction and the history of its name are unknown. Presumably, on the site of the monastery was an ancient Greek temple dedicated to Dioskouros. In Byzantine time, a Christian monastery was built on this place (the first mention of the monastery has appeared during the reign of the last Byzantine emperor Constantine Palaeologus). It was a common practice of that time to build Christian churches on the site of ancient Greek temples, and often materials or partial constructions from the previous one was used for it. This is symbolic: paganism was destroyed, and Christianity took its place.

As it was always on Crete, the monasteries took the most active position in supporting the revolutionary uprisings of the Cretans against the conquerors. Thus, for assisting the rebels during the revolution of 1821, this monastery was completely burned down and destroyed by the Turks in 1823-1824: such was the revenge for the Cretans’ desire for freedom.

Until 1830 the monastery was abandoned. By the time, Crete came under Egyptian rule, and the Egyptian governor Mustafa Naili Pasha, who married a daughter of a priest and allowed her to remain a Christian, decided to create a multicultural society on Crete allowing the Cretans to restore their temples and monasteries. During the years 1830-1851, two monks, Simeon and Meletios, tried to restore the Monastery of Diskouri on their own. It was a hard work, because only stones have been left of the previous monastery.

In 1842 an icon of St. George the Victorious appeared in the monastery, as a gift of the bishop Kallinikos, and is still there.

During the uprising of 1866-1869, Diskouri held a key position in the region: there was the military headquarters, an ammunition depot, a food and materials storage depot, and a hospital there. If you look at the monastery from the side of Veni village, the appearance of the monastery, its well-fortified walls and the architecture itself resemble more fortress buildings than a Christian monastery. After the end of the uprising, the monastery was restored and is already functioning only as a monastery. 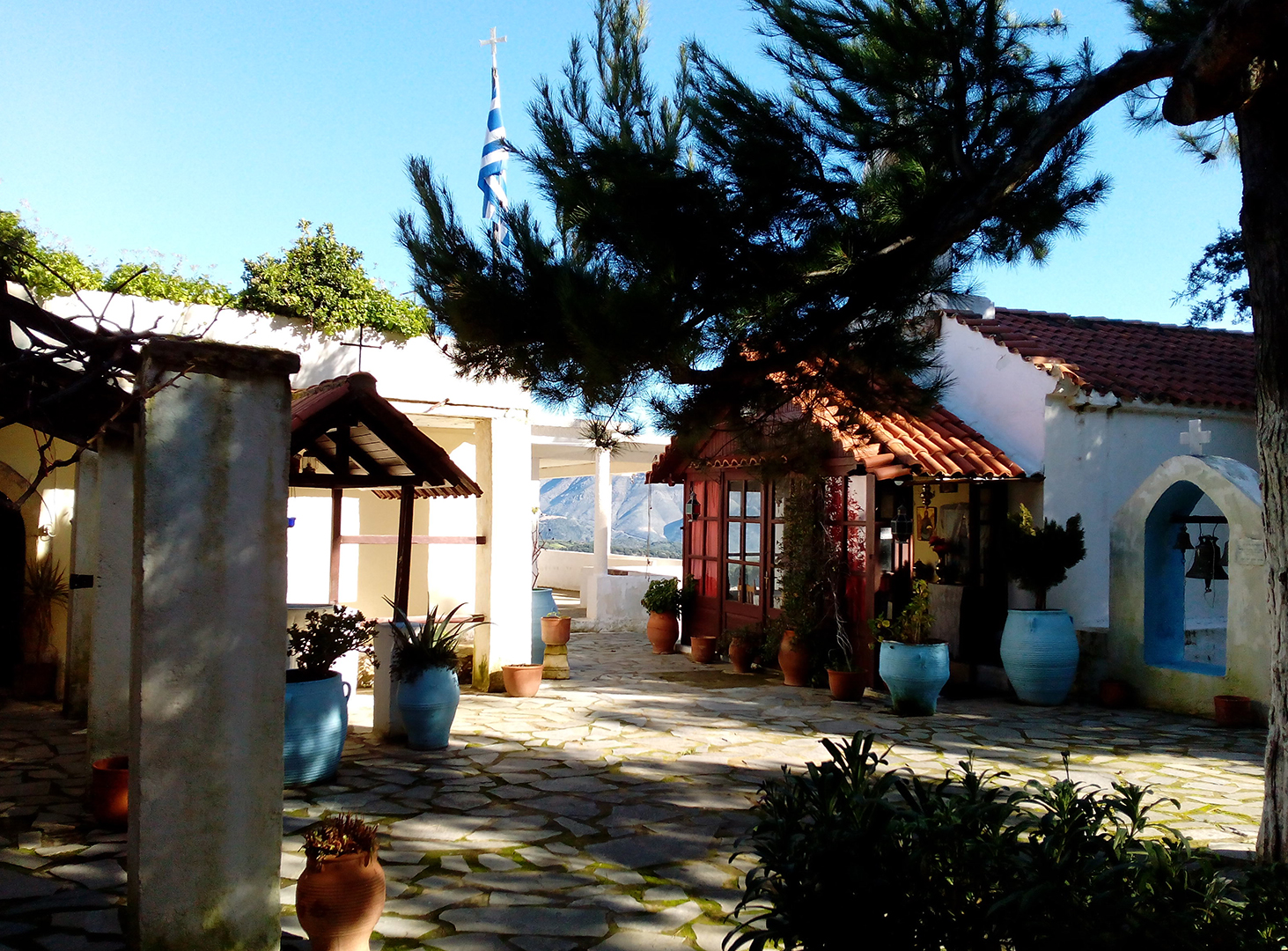 The icon of St. George the Victorious, presented to the monastery, became a truly unique phenomenon in Crete. This is the only icon before which the shepherds still swear by the name of Zeus! The oath is: “I swear to Zeus, and you should know that I am not guilty of your missing item.” It does happen, when one shepherd suspects another of stealing an animal (sheep, goats): he demands that the suspect go with him to the Diskouri Monastery to make this oath. The shepherds firmly believe that, if you are lying before an icon, something terrible will happen to you or your family, and almost every shepherd knows an example of such a deception and the terrible consequences of it.

Cretan sculptor Georgios Koutantos, whose father was a farmer and shepherd, grew up among these traditions and was inspired by such faith of shepherds to the power of St. George: he carved out of wood his icon, wanting to bring this unique fact to people from other countries, and to confirm the continuity of times and traditions. This work is in the Museum of Wooden Sculpture in Axos.

Of course, the Christian church has a negative attitude to this method of settling relations among the local population: to swear from the Christian point of view is a great sin. But this is Crete. Here, pagan rituals are still closely intertwined with deep Christian humility.

The Abbot of Diskouri monastery, the monk Father Rafail, agreed to tell a little about modern Diskouri and his service to the correspondent of “The New Crete”.

It is warm and cozy in the traditional stone building with a room-kitchen including a large table, a stove-fireplace. On the walls there are icons, interspersed with traditional weapons and decorations, on the table — snacks. Father has finished his evening service and is ready to answer our questions. 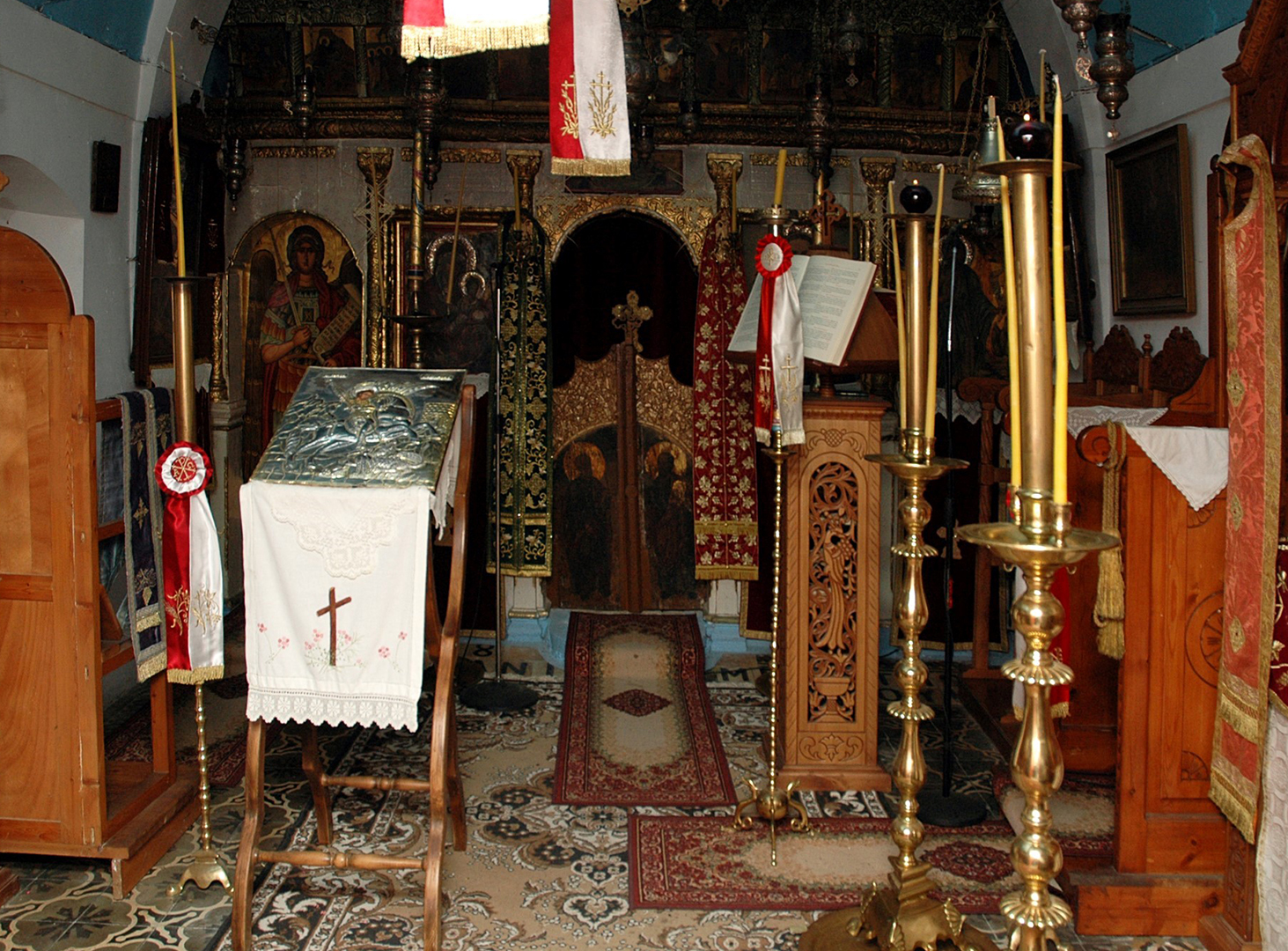 — Father Rafail, how and when did you come exactly to this monastery?

– When I was 30 years old, Bishop Theodoros offered me a choice of four monasteries in our region. I knew that there was a very old Abbot Kallinikos before that in Diskouri, and the monastery was very abandoned: it needed full restoration, and … a young, energetic Abbot who could solve these problems. Therefore, I chose Discouri.

– Have you ever regretted your choice? How long did you restore the monastery?

– I have been in the monastery for 25 years, and all this time to this day I have been engaged in restoration. There is still a lot of work to be done, but I have never regretted my decision, and if I had now been confronted with the same choice, it would have been Diskouri again.

– Do you live alone in the cloister?

– For many years I was alone, but recently my mother moved and is now in the monastery. She helps during the service.

– The church that is on the top of Mount Psiloritis, Timios Stavros (Holy Cross), belongs to your monastery of Diskouri. How often do you climb to the top to conduct a service there?

– We (a few people help Father Rafail — author’s note) climb the mountain in the evening and spend the night there. Then I conduct the service early in the morning at dawn. This happens twice a year: June 29 and September 14.

– Have you witnessed any miracles in the monastery?

– Miracles happen to those who believe in God. Of course, during my stay here, I have seen miracles many times, which are evidence of Divine grace, but I don’t want to give specific examples, because this is personal: it is not known whether those with whom these miracles took place want me to make them publicly.

– Do you know our Russian Orthodox saints?

– (The Father nods at the iconostasis, where is a small icon of Serafim Sarovsky.) Unfortunately, until 1992 Russia was a closed country: any information practically did not reach us. At that time you were forbidden to believe in God and his wonders. Then, of course, we knew little about your saints. But after 1992, everything changed, and we became witnesses of the next Divine miracles: we learned about Luka of Crimea, Matrona of Moscow and others.

– Please answer the question of our readers going to visit Crete on the eve of Easter to meet it here, together with the Orthodox Greeks. How is the preparation for confession and communion, and what to do, if a person does not know English and Greek, how to confess on Crete before sacrament?

– Usually the preparation for confession consists in reading special prayers (canons) and the one for the sacrament lays in the implementation of fasting days (Wednesday, Friday), and formation of inner attitude previously. Before Easter it is right, of course, to observe the entire fasting. If there is no such possibility, then try to do it at least in the Great (Holy) week. Regarding confession in another country… I would advise you to confess at home, before your travel, and, while fasting, to receive Holy Communion with a clear conscience here on Crete, in any Orthodox church?

– This year, the feast of St. George falls on April 29th. How will you celebrate it?

– In the morning, a festive liturgy, and then – waiting for guests! Every year on this day we ourselves prepare for the guests of the monastery traditional festive treats, so we invite you to our meal!

We thank Father Rafail for his time carefully asking permission to make photos of him, the monastery and the icon of St. George.

Obviously, the priest has gained confidence in me: he allows to hold this photo session.

In the courtyard of the monastery, in the outbuilding, there is an old factory for production of olive oil with millstones and a press. Just like thousands of years ago, the most (or one of the most) environmentally friendly olive oil on Crete is produced here using old technologies. A tour of the factory is led by no one, but the whole process is you intuitive clear, so, if you find yourself in this monastery, be sure to look at this museum of oil production: you can’t call it any other way!

This small and cozy monastery with its toy bell towers and buildings, with Father Rafail’s and his mother’s warm welcome is the pearl of the Cretan region Mylopotamos. Dear readers, hopefully you already know where to go on Crete immediately after Easter!