Skip to content
TheNewCrete > Interesting > Zeibekiko, or how to make friends without a word 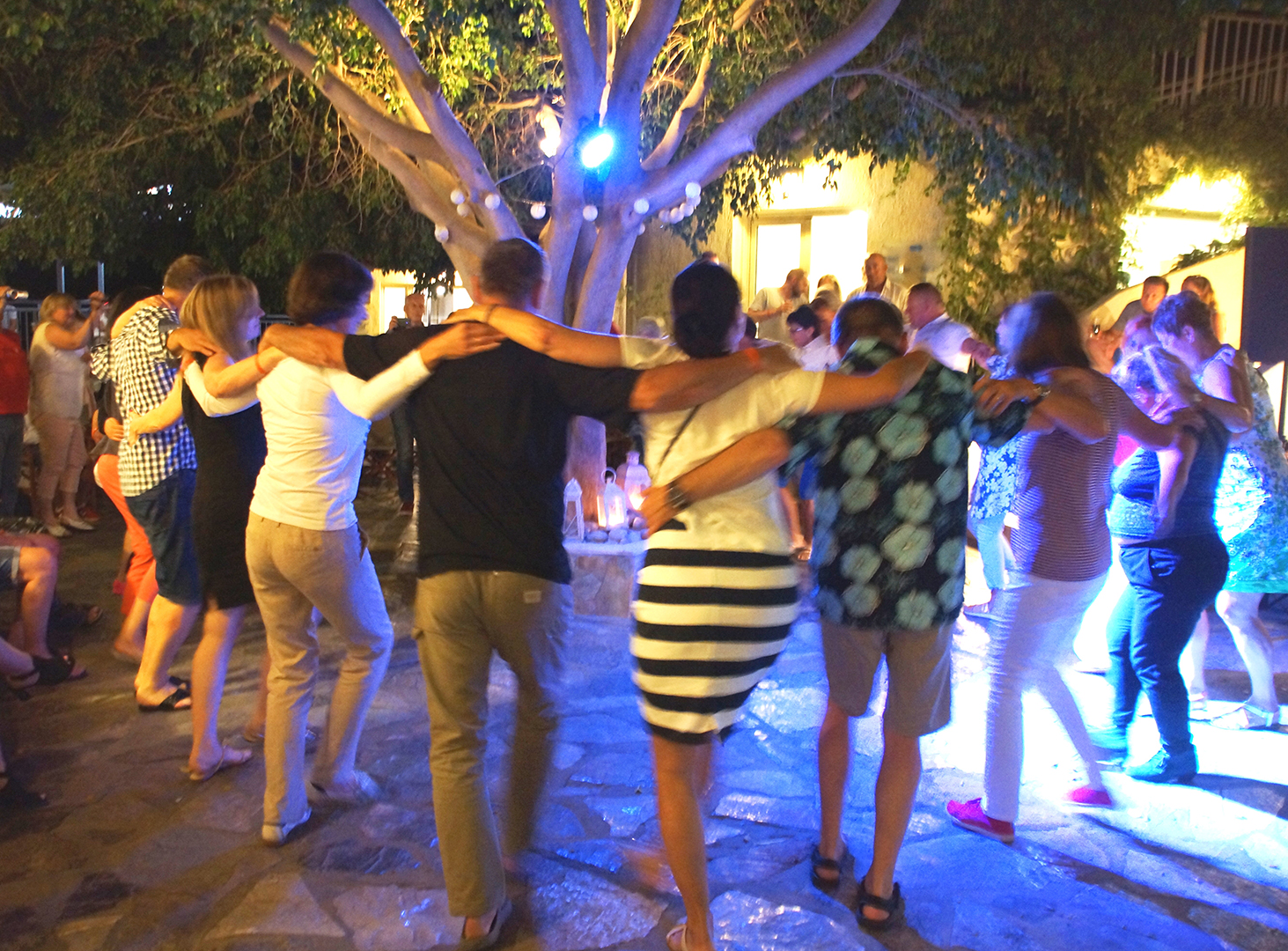 The hotel was wonderful: white stairs, garden and turtle doves in it. Maria at the reception started every morning with her unchanged “Kalimera!” Bartender Antonis taught how to drink Knossos brandy correctly and promised adventures every day… But Poles, who flooded the hotel, remained aloof and restrained–this was compensated by the smiles of every Greek I meet. There were no Russians around me as well as decent English in my intellectual luggage, so I was a little upset about certain sense of loneliness some evenings until a “Greek” one came…

The singer was like Demis Roussos, both in appearance and in the timbre of his voice. This voice filled our terrace with the wind. The same free and light wind which was something saying you and flew away to the sea. A sip of brandy, a song, another song, and you are ready to sing along. After another sip you are ready to dance. It was a sirtaki!

Two days before, Maria held a master class in it and for good reason. A few stand in a circle, and the Poles do not shy away from you: the voice calls, and we begin. The faster the music, the stronger the arms of the neighbors hug your shoulders, the more coherent movement and–it’s amazing–the more open and smiling are faces. Exited, out of breath and grateful, we eventually fall into chairs, not suspecting that this is only a beginning. “Demis Roussos” caresses again your soul with another song. What is it taking about?

“About a bird”: it is the only thing I understand from the explanation of my Polish neighbor who has just applauded our sirtaki.

The song lasts, and a handsome man with curly black hair (one from the hotel staff) goes to the center of the site. With outstretched hands–as if he wishes to embrace everyone or to fly away–he begins to dance. Oh, my god, what a dance it was! At the time I had not seen a film about Zorba and did not know that the Greeks pour out their souls like this in music and movements.

Imperceptibly, all the audience squatted after Maria and began applauding to beat out the music rhythm while our hero was making incredible steps in the center. It seemed that all the energy and passion that have lurked in him is splashing over, capturing the audience. Maria replaces the dancer and shows her version–a gentle one, and then takes a spectator by the hand, and leads with her. You will not believe, the most insecure decided on a solo in the Greek circle at the end of the evening. Even a funny fat Pole in his invariable leaky hut danced also famously, no worse than the Greeks: overfilled by passion he forgot about how he looks.

There were no fixed movements: just your improvisation in accordance with the musical melody and the rhythm.

We laughed, applauded and hugged being together and happy. It seems that without knowing it ourselves, we danced zeibekiko, “a rush and flight of the soul,” as the Greeks say. At the very end, the said handsome went out into the circle once again. This time it was a fiery one because of raki, which added fire; and he presented his farewell solo.

Each has his own zeibekiko

The dance got its name from the Zeybeks–the Thracian who once emigrated to an Asian region of Turkey. They say that those Zeybeks constituted a separate caste, from which the Turks recruited special military units. They maintained their original customs, and until 1883 wore their national Thracian clothes, but the sultan ordered them to wear the official gendarme uniform. Proud Zeybeks could not tolerate this (like much else), so they raised a rebellion, for which they paid cruelly… Later, the descendants of Zeybeks returned to Greece and brought zeibekiko with them.

This is an improvisation dance: there are no fixed steps and figures. You can express yourself as you like: for men–up to jumping over chairs, tricks with weapons and raising a glass from the floor without the help of hands. A “support group” usually gathers around. Sitting down, it should cheer the soloist, clapping to the beat of the music. The main thing in zeibekiko, the Greeks say, is a state of mind (passion, pathos, courage–call it wat you like): every Greek dances his own zeibekiko.

A classical sirtaki is in the movie “Greek Zorba” and a classical zeibekiko–in the film “Eudokia”, the music for which was written by the Greek composer Manos Loizos. As it turned out, we danced zeibekiko in our hotel accompanied by the song “Eagle” written by Notis Sfakianakis. Do you remember that the Pole explained something about a bird to me?