Skip to content
TheNewCrete > Recreation > On the roads of Crete 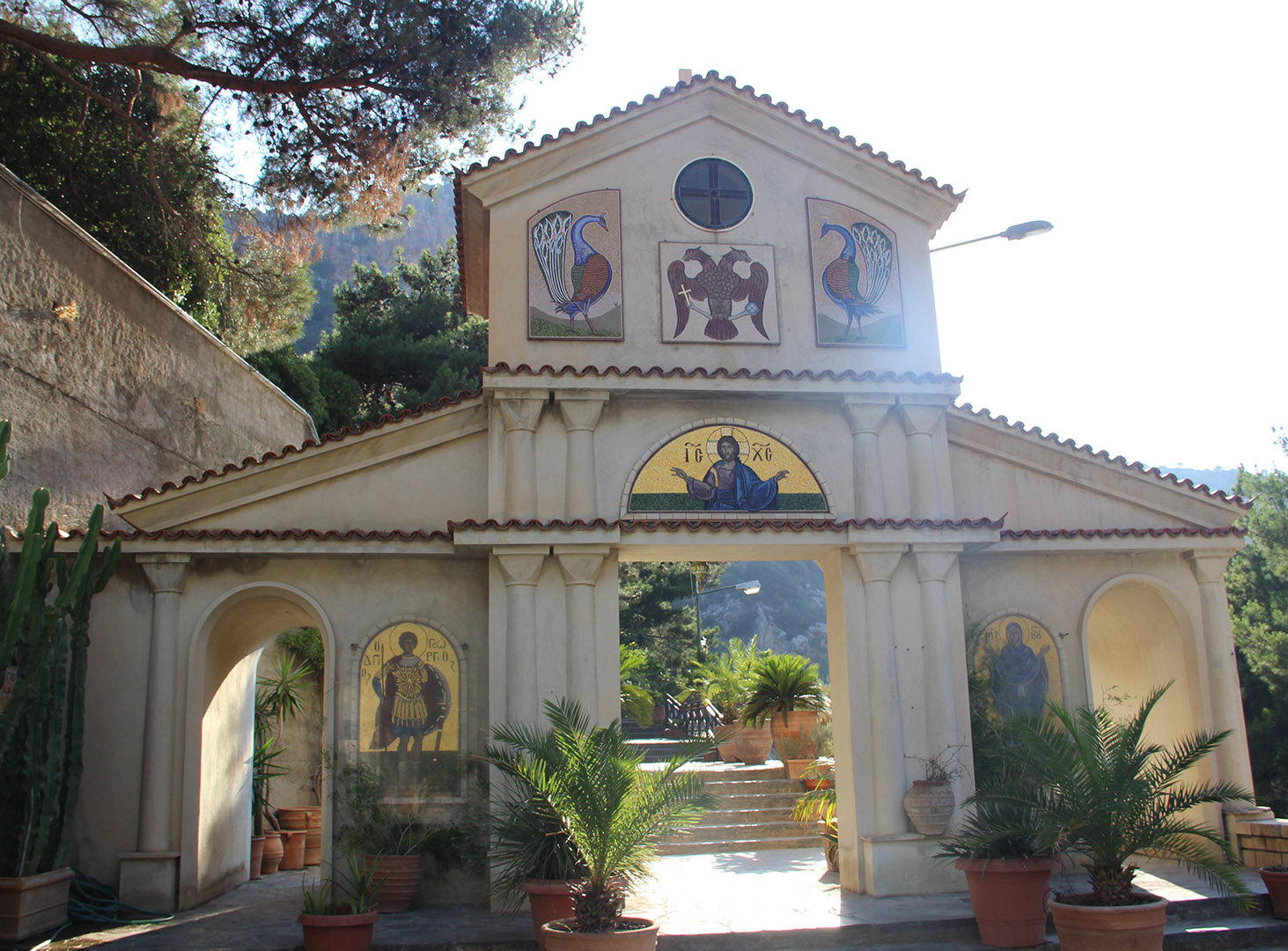 We continue to acquaint you, dear readers, with the routes on Crete as proposed  by the company www.thenewrentcar.com

Let’s begin our blessed way to the monastery of St. George

It is not at all difficult to find it adjacent directly to the Heraklion–Agios Nikolaos highway. Cretans, faithful to tradition, consider it a good sign to make a stop here, like the shepherds and wanderers of past times. Moreover, St. George is the patron saint of all travelers — how can on not bow to him!

The first temple was built here already in the X century, but in the XVI pirates razed it to the ground. And only 14 years later, the legend says, in 1552, the monk Nikolaos from Rhodes, led by God’s craft, found an icon of St. George in a local cave. Together with his brothers, he began to restore the monastery. The monk’s resting place is in a rock cave nearby!

In the ancient chapel you can see a copy of the St. George icon: its original is stored in the monastery and brought out for worship only on major holidays. What happened in the monastery when the Turks ruled on Crete — God knows, but, they say, the icon of St. George has traces of three bullets….

In the 60s of the last century, the monastery was restored, but the spirit of the past has not been lost, judging by the impression of a tourist: “…A strange feeling embraces you entering its territory. The conversation becomes quieter, the step slows down, and you sink into some other world. No other monastery or cathedral on Crete gave me such a feeling.”

Well, if you are not one of those who put candles in front of icons, you can admire the landscape: the monastery in the Selinari gorge is surrounded by gray-red rocks, where white headed vultures nests.

“…A fabulous Greek town, leaned against a mountain of white stone, with terraces running down to the Gulf of Mirabello. Your cherishable wish will be the never-ending stroll through its cobbled streets, staircases winding along the slope like bougainvillea-lianas. Their gently pink flowers are reaching for the roofs, balconies, parapets and …for you, an occasional guest, a neophyte tourist examining Cretan areas with the delight of a puppy”. — One could read this description of the town in an issue of our paper.

Of course, a typical tourist will need a list of the classic sights of the town, which seems to have appeared from the foam of the sea. On such a list are Lake Voulismeni and the Archaeological Museum, monuments, and the Museum of Folklore.

Don’t rush to bay a map–leave your car and go on foot along twisted streets and white-stone stairs. Everything that you are destined to see, will appear on your way unexpectedly and joyfully: a horn of the goat Amalthea on the seashore, and Europe on bull-Zeus in the same place. Ships in the port will sparkle with white-blue sides, a stranger tourist may kiss you on the cheek at the monument to Roussos Koundouros; and when, having tired, you will sit at a glass dining table on a terrace of the cafe, sip a dark beer (oh-oh!), and look down. There will shine, reign and charm you the very Voulismeni where Aphrodite bathed. 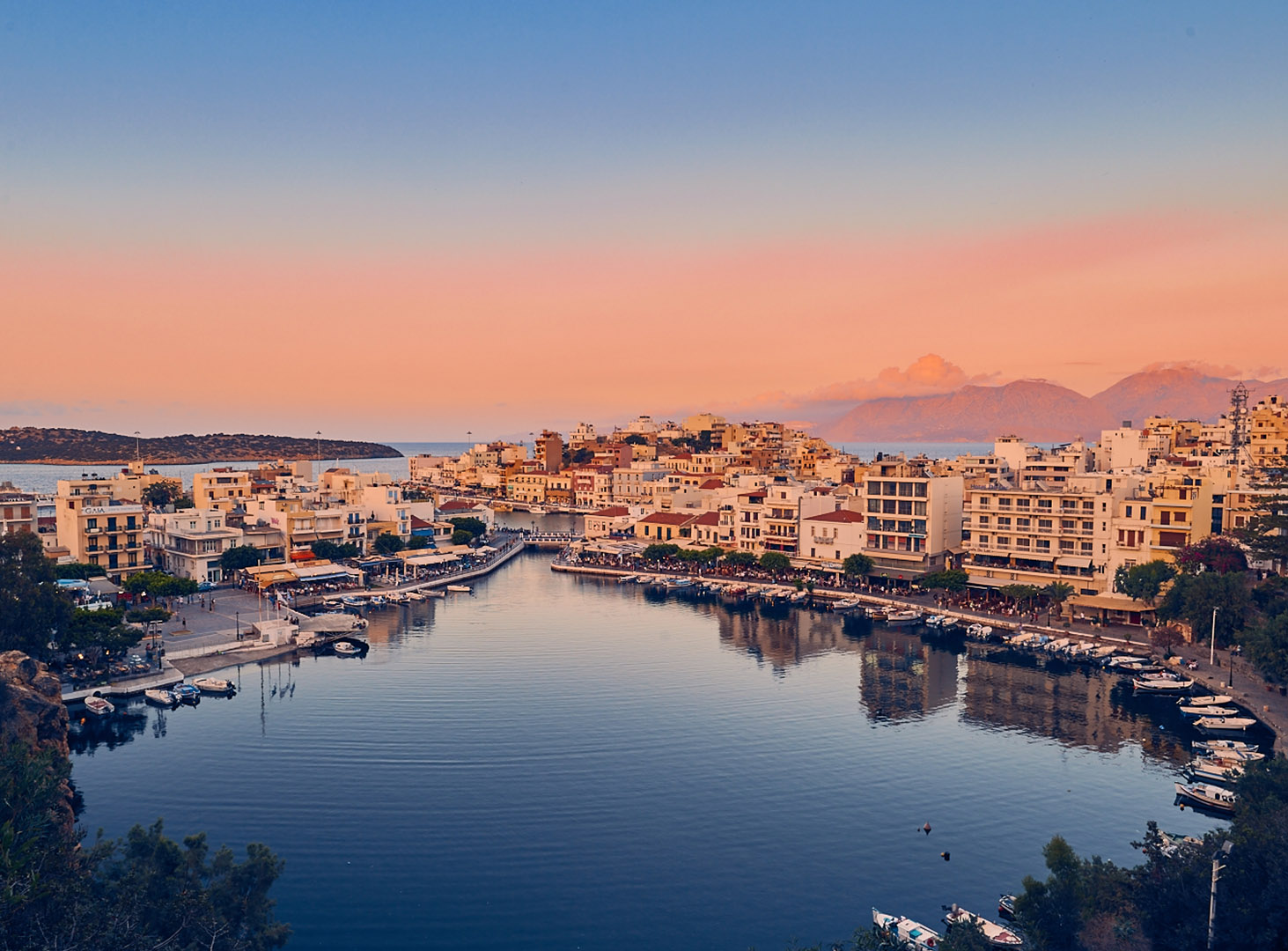 Just some 10 kilometers from Agios Nikolaos you will be in Elounda. Listen to how it sounds: E-lun-da. It is heard both Hellas and Elpida (“hope”) and more than it—the wind, and space. There are a lot of them—above the Mirabello Bay—that it takes your breath away. They say that Elounda was only a small fishing village, until the Walt Disney film studio did make a film about its inhabitants in 1977. Its series has been shown in many countries, and the beauty of the scenery has attracted many tourists here. High-class hotels have grown on the slopes of the cliffs, and Elounda has become a favorite vacation spot of presidents, showbiz stars and other famous personalities.

The main attraction of these places is some other than expensive five-star hotels—the ancient city of Olous. The city with a population of 40 thousand inhabitants flourished in antiquity, had its fleet and minted coins, but has drowned, presumably after an earthquake in the II century. Remnants of its buildings are still visible through the crystal-clear water of the bay. The long wall of the sunken city stretches quite close to the water surface, so that even non-divers can feel the touch of eternity just walking on the pitfalls. Connoisseurs advise that the sunken city should be looked for in the eastern part of Elounda, right at the isthmus that connects the mainland with Spinalonga (Calydon). Use as a landmark the remnants of windmills, but do not go too far: Olous is located very close to a pretty promenade with benches and lanterns.

As you already understood, Elounda is close to Spinalonga: it was a peninsula (now the island), where a boat goes every 15 minutes. Spinalonga is already a classic site, so we will not bore the reader with a description of the Venetian fortress, ancient streets, as well as of the courage of its former inhabitants, saying only that during the World War II the island was not occupied. 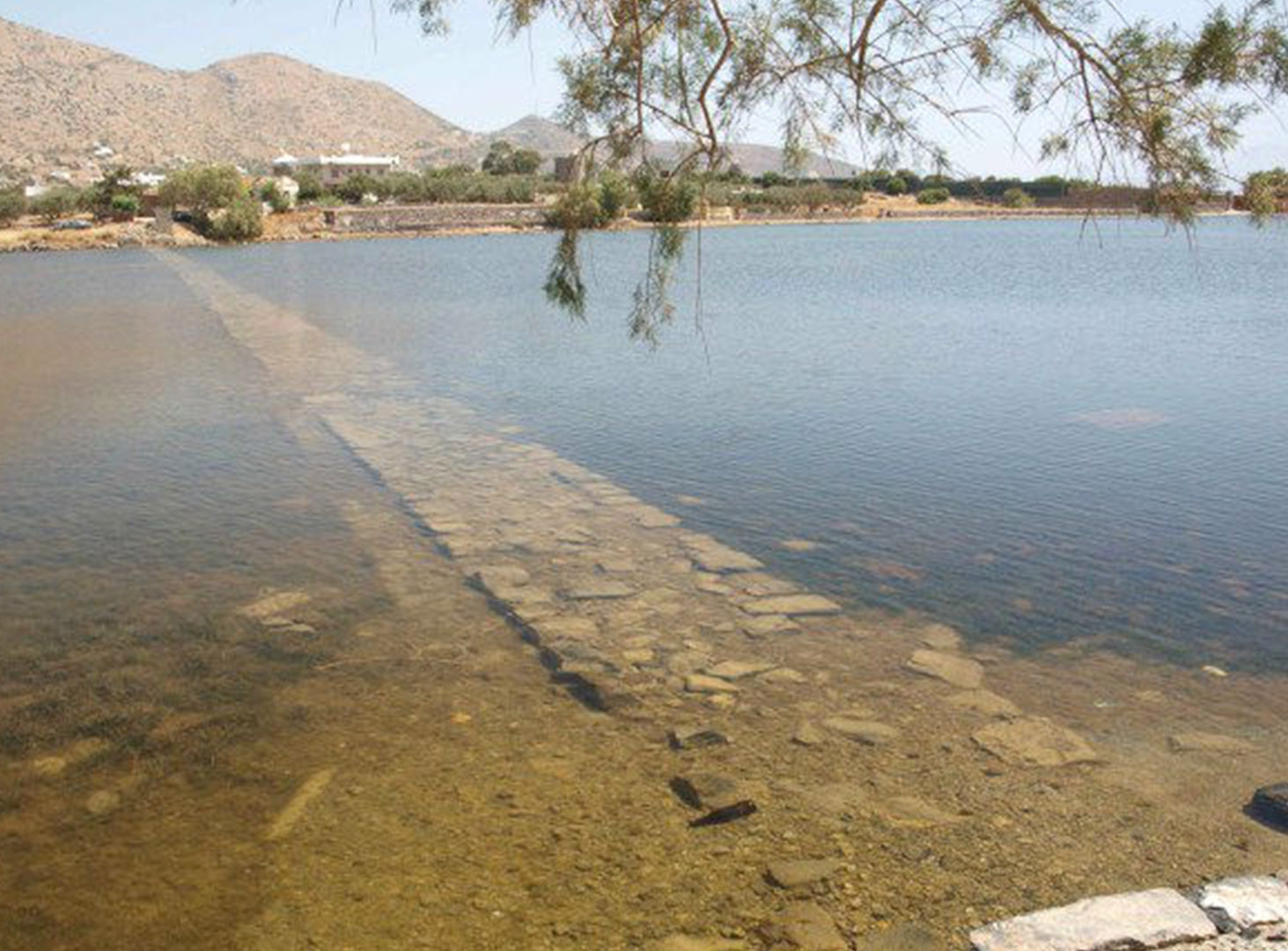 In the village of fishermen

Plaka is a small fishing village right at the very “entrance” to Mirabello Bay, one of the most beautiful places of the island, according to experienced tourists traveled many miles on Crete’s roads. Its main attractions are a beautiful view of the bay, the island of Spinalonga (Calydon) and an alley with solar-powered lanterns. You can get to Calydon mainly by boat from Elounda, but knowledgeable people claim that the boat goes also from Plaka. In addition, Aris, the owner of the Spinalonga tavern, can give not only a discounted lunch, but also arrange a boat to the island. By the way, the tavern of Aris works all year round, and local people often come here: this is an absolute sign of the quality of its cuisine… 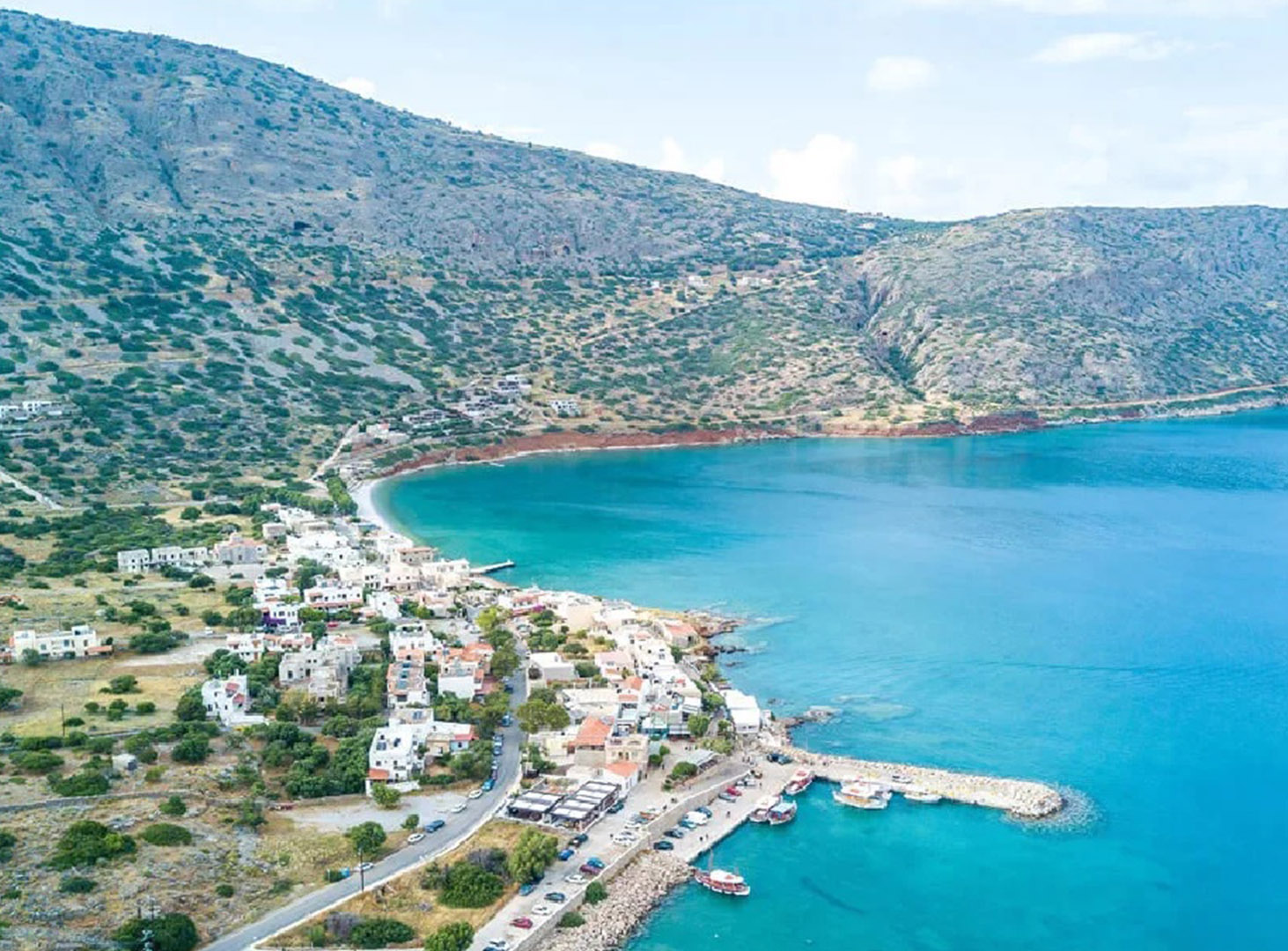 In the past, Plaka was closely connected with Spinalonga: it was from Plaka that the first patients were transported there, and the staff with the doctors lived there. The last remarkable event in the village history is the shooting in 2010 on the MEGA channel of the television series “The Island”. 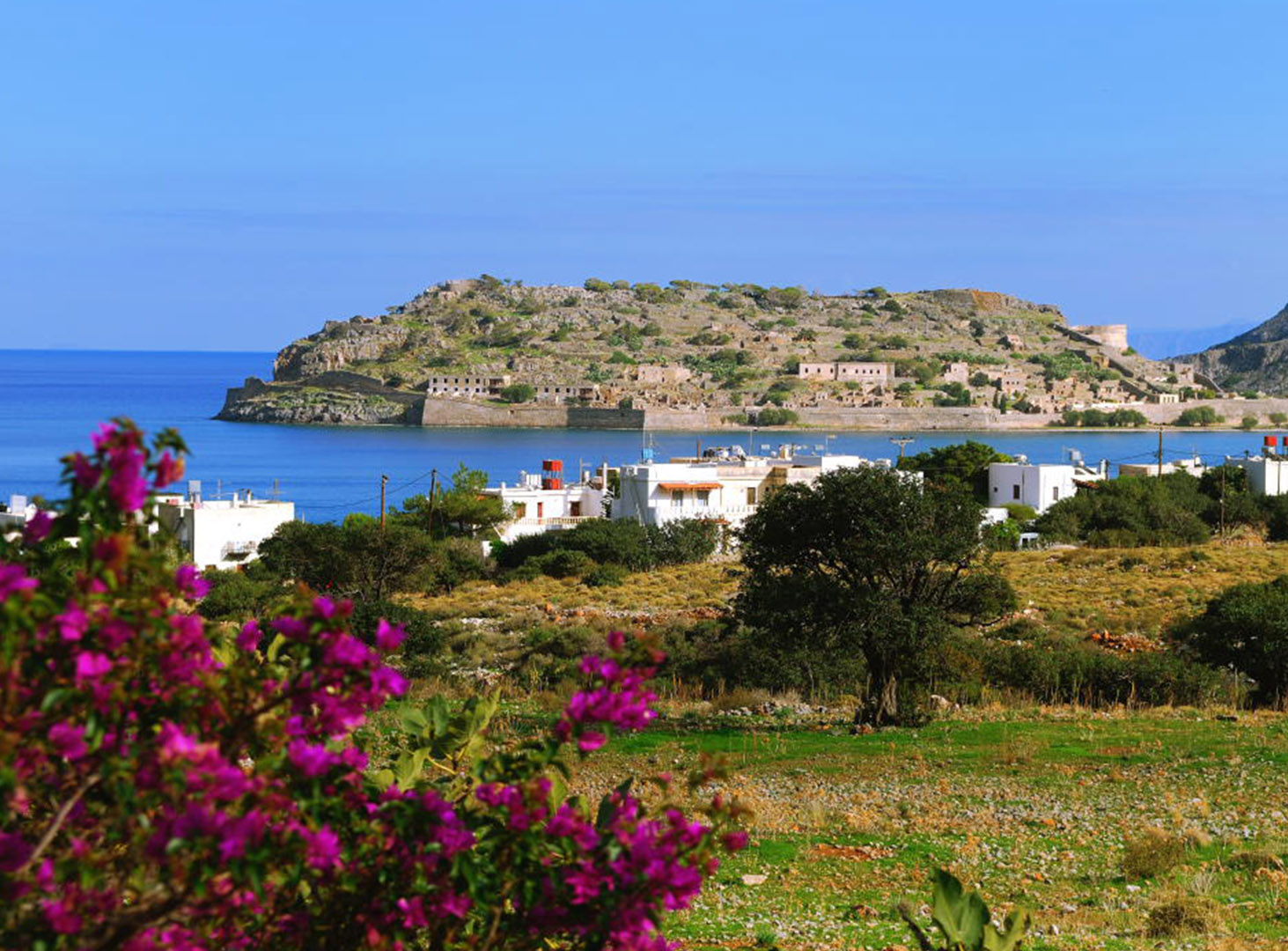 Have you forgotten that Plaka is a village of fishermen? Because of it all fish and seafood cooked in the local taverns are fresh, so that tourists come extra to Plaka. The local beach with large, unusually light pebbles, the transparency of the water, judging by the reviews, are phenomenal: a paradise for divers with a mask. But do not forget slippers! Among the pebbles there are sea urchins.

On the wings of the wind

The end point of the route number 2 is the village of Vrouchas. You can get here by moving north of Plaka. The higher up the hill, the more amazing is the view of the bay. The wind walks around and blows out all your accumulated husks, if you have ones. Practical Greeks figured out long ago how to use the power of the winds here: Vrouchas is best known for its ancient windmills, which once milled grain. Constructed on open slopes, they all rotated from the wind of a certain direction and were called ahetrocharis (another type you can find on Crete are the hetrocharis: the round mills driven by winds of any direction). They say that a special impression is made by a modern regional wind farm located not far from the complex of old windmills. You experience an unreal feeling of coming inside the civilization between two parts of the human history. 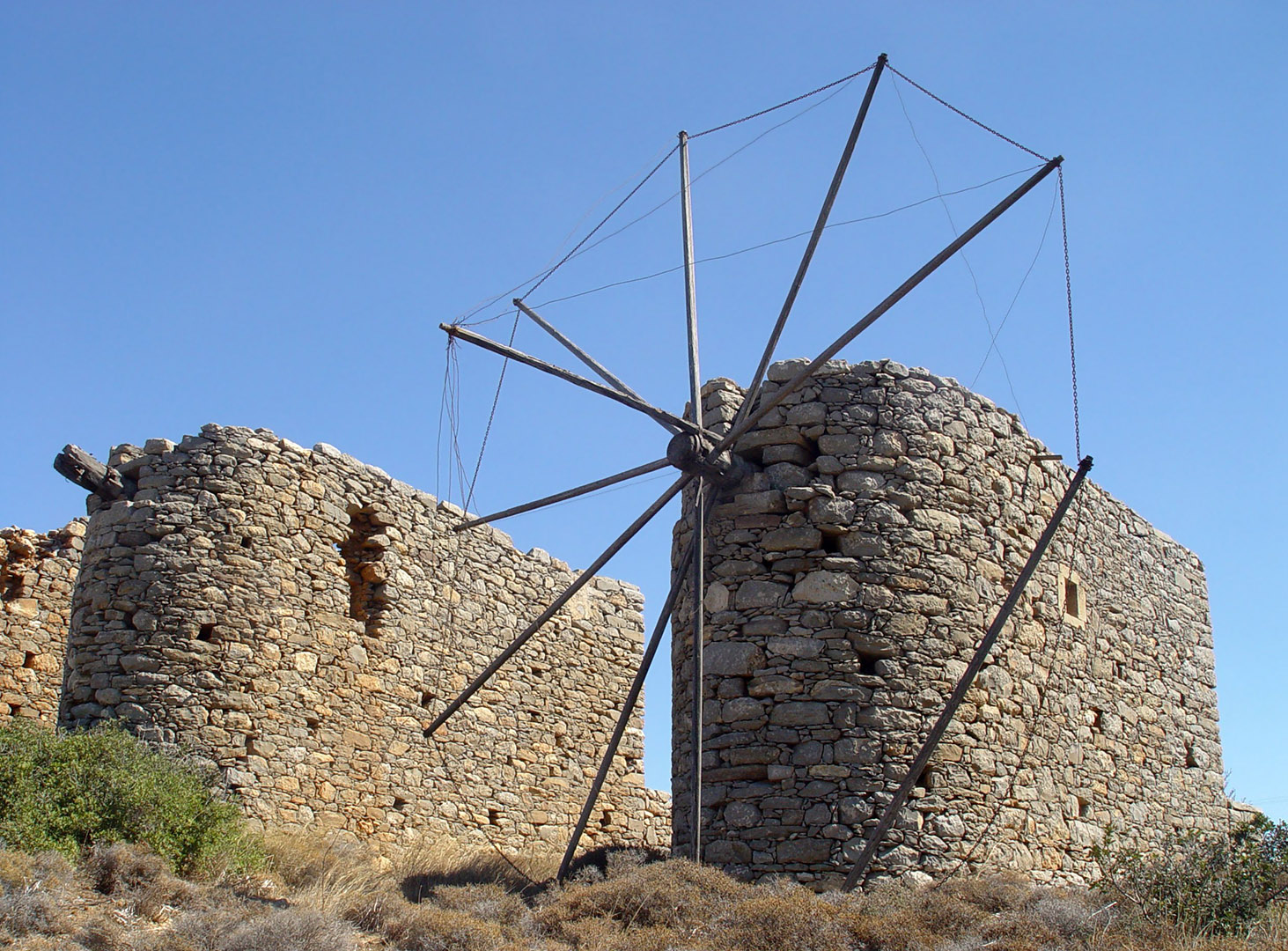 After worshiped St. George, got plenty of fresh air and enough of all kind of views, had a good swim and meal, it is time to go back. Moreover, there are still so many uncharted roads on Crete!