Who knows that snails belong to the favorite dishes of the Cretan cuisine?

Called Khohlyush. A local national dish, like the frogs in France.

So many ways to cook snails as in Crete doesn’t probably exist in any kitchen of the world. A cooking method depends on season. In the spring snails accompanies all kind of herbs: fennel, green beans and wild herbs. In the summer are zucchini, beans and eggplants.

Snails belong to the oldest Greek foods. They were eaten back in the Minoan era. On Minoan Santorini island, archeologists found a pot with snails. Their shells have been found during many excavations. What were the ways of preparing them, scientists do not know, but an ancient Roman doctor referred that the Greeks ate snails every day. During Byzantine times healers used snails as an important ingredient in many medicines. People in Crete believed up to the middle of the last century that snails solve problems with potency and fertility. 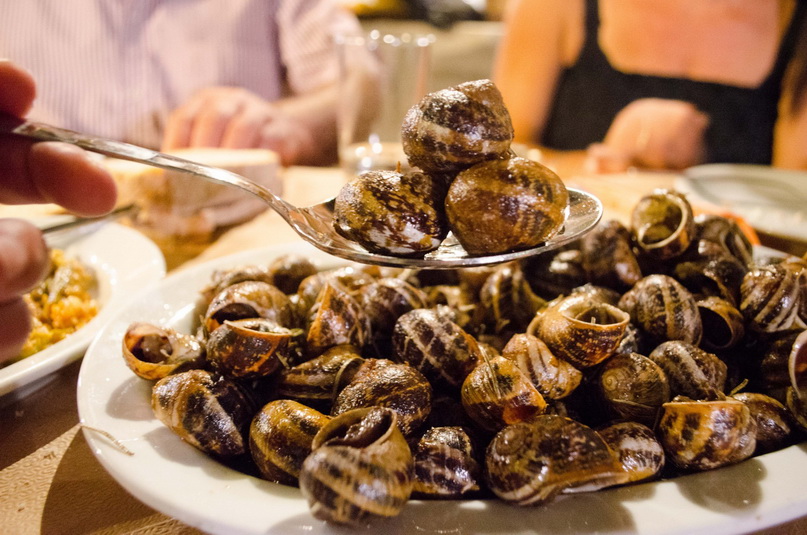 It is an easily accessible food which does not require much effort or a long hunt. Therefore the snails rescued Cretans in difficult times of war and famine. After all, there are a lot of them in the mountains and they don’t need any special care. However, for example, they tried not to collect them in the winter when the snails are breeding, but in the spring, summer and autumn, they are constantly hunting for the snails, overfed fresh herbs. It is said, that the snails of Crete are of the best quality just because of these unique herbs, giving the meat of snails a special flavour. Thanks to these herbs, the snails are very useful as a preventative for heart diseases. The body of snail contains a great amount of acids which are radically reducing the risk of a heart attack and stroke.

The snails are currently eaten in Crete very often, especially during the Lent as well as a snack (fried in olive oil with rosemary) given to strong wine and raki, a grape vodka.

Fried snails, placed on the coals, moussaka with snails, snail pie, cabbage stuffed with snails… This is a few of the “snail” delicacies common in Crete.

It is very recommended to taste them and then to cook yourself. 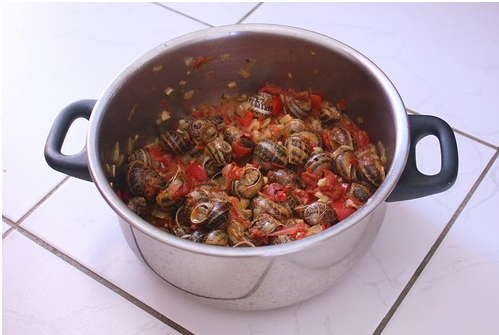 How to cook snails himself

Snails can be purchased in almost any supermarket or Cretan market. These snails have been already “purged”, i.e. they have been fatted with flour or pasta before selling (to clean their stomachs from harmful substances). By purchasing snails, do not forget that they are alive, simply dormant. Therefore, you must store them in a grid so that they do not suffocate or flee. They creep, by the way, fast enough.

First of all, it is necessary to clean the snails, i.e. to remove the membrane. The larger is the membrane – the door in his house – the fatter is the snail. We put the snails into a pot of cold water. Water immediately brings the snails out of hibernation. A short while later, live snails reveal (appear from shells). Dead snails are not eaten. Live snails are washed several times in the water and cleaned from film. 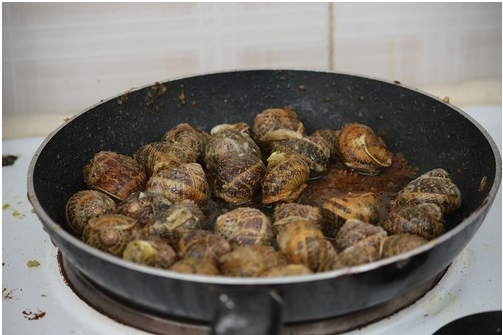 What follows is even a more inhumane act: we throw live snails into boiling water and cook for no more than 10 minutes. They produce foam which we remove with a slotted spoon. Then the snails will be washed in a colander to remove remnants of saliva-foam from shells, and now they are ready for consume.

Then you can roll snails in flour and fry in olive oil.

One pours on heated pan 2-3 teaspoons of salt and lays snails out, their “doors” down.

When the snails stopped “singing” and “sizzling”, one adds olive oil mixing the snails.

One leaves the meal over medium heat for a few minutes, then adds vinegar, rosemary, mixes all again and removes from heat.

Snails are ready! They are served in a deep dish with a produced in the meantime sauce.

For 2-3 minutes, one throws washed snails into boiling water (that they do not produce a lot of foam). Snails will be cooked for 5-10 minutes (depending on size).

One fries onion, adds grated tomatoes, salt, pepper, sliced potatoes, zucchinis, eggplants and garlic. When the meal is half ready, add the snails and stew for 5-10 minutes. Cook over low heat, without stirring.

How to eat snails

The main thing is to learn how to properly pull them out of their shells.

Hold the shell with fingers (in a restaurant you will use the tongs) to pierce the flesh of snail with two tines of fork and turning to pull snail out of shell, without destroying the latter (however, it is easier to show than to explain).

Then, take a toothpick and gently remove the dark tip (it will rush into your eyes, this is what comes out of the snails) before sending the snail in your mouth. Wash it down with cold white wine!

The taste is specific, as many say, but worth a try.