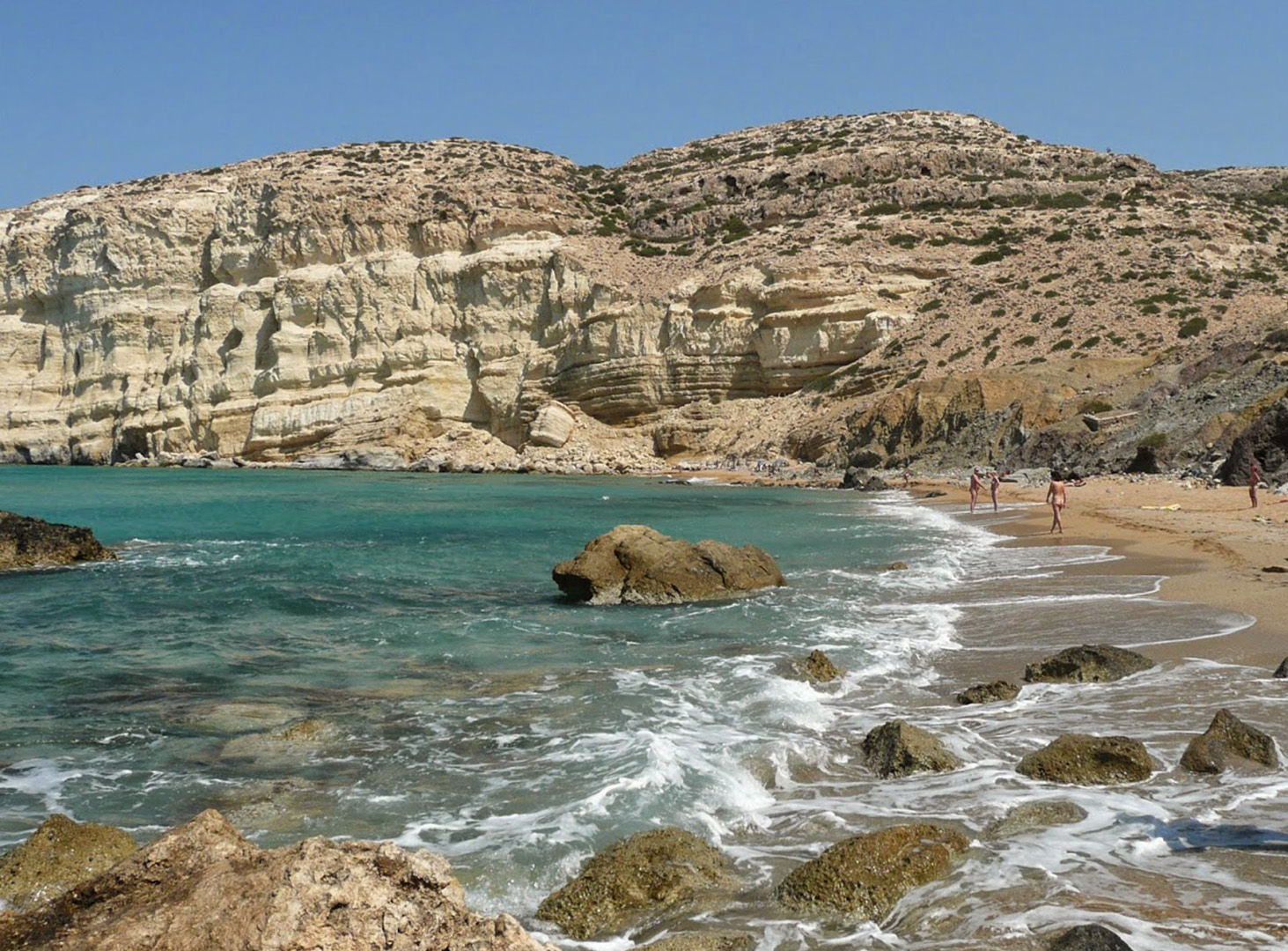 The Greek government is loyal to lovers of nude sunbathing, and although this phenomenon is not officially permitted, it is in fact not prohibited. This is one of the reasons making the country popular for nudists

In view of the orientation toward the “average” tourist, the country is dominated by family and public beaches. However, in every most remote corner of Greece you will easily find a beach for those who are “without complexes”.

Discard the stereotypes and prevalent in Russia clichésnobody here will pester you, and, even more so, stare: you can safely enjoy your vacation.

Both the island and the mainland coast of sunny Hellas are full of secluded coves attracting nudists from around the world. The most “advanced” in this respect is the island of Crete, to which is devoted this material.

North of Elounda, just after the village of Plaka, before the main road turns left into the mountains, there is a dirt road leading to the right towards the shoreline. After about 700 yards you will see a path descending down to the sea. The way there is partitioned, so the car should be left here. Below you will see a flat limestone slab with a good approach to the sea. It’s an ideal place for sunbathing and diving with a beautiful view of Spinalonga.

To the north of Hersonissos is another beach. To get there you need to go between the hotels of Crete Maris and Terra Maris, located at the northern end of Hersonissos, and to turn to the shore using the asphalt walking path, about a kilometer to the north. Above, the beach can be seen only having already passed it, as it is under a steep bank. To get to the beach you need to go down a steep path with stairs along the edge of the cliff. It’s not very convenient and can end up falling down. Much more convenient is to go down the concrete steps to the previous beach, and to reach the nudist beach along the coastline and protruding rocks while walking on flat stones. The landmark for the way down is the branch of the tarmac road going to the left and the cafe there. There is not too much space on the beach. It can accommodate not more than two or three dozen people. The beach is partially closed from the north wind, and there are there almost never strong waves.

East of Georgioupolis, there is another beach where you can always meet nudists. If you take the road from Chania towards Rethymnon, then, after passing a small town of Georgioupolis, you will see the “Pilot Beach resort 300 m” road sign, and about 500 meters after it there will be a parking sign where you can park your car. From this place (coordinates 35-21’17.7 “N 24-16’48.3” E) you can also go along a parallel road running near the beach and after about 150 meters leave the car next to the “Pavlos kanteen” road sign. Coordinates of the beach itself are 35-21’20.6 “N 24-17’02.1” E. The beach is between Pavlos and the place of hotel’s sun loungers which is located to the east.

15 km east of Chania, between the small resorts of Kalives and Almirida, there is a place called Kera, where are a few villas and apartments. Kera has a stony beach at the western end and a sandy one on the eastern, which is never filled with people and is often used by nudists. Between Kera and Kalives there is a small cove, not visible from the road and other beaches. To get to the beach, you need to go from Kalives to Vamos, turning left to Almirida. Then, passing along the coast, turn to Kera. The beach is a narrow strip of stones with growing trees. The stones continue for a couple of meters in the water, and then sand begins. The coordinates of the beach are N35 27 ’02 “E24 10′ 57”, and access point to the beach lies N35 26 ’57 “E24 11′ 00”.

Falassarna is located on the west coast near Platanos. On the coast of the Falassarna Bay, there are several beaches: small sandy beaches near the ancient city of Falassarna (north); “Long Beach” or “Pachia Ammos”, the famous long and wide sandy beach of Falassarna; another sandy beach with a rocky seabed (south); a small pebble beach near the port of Falassarna (south). On the edges of these beaches or between them you can meet nudists. The most commonly is used the northern rocky part of the large beach with sand dunes on it.

In the eastern part of Crete, there are many beaches, but most of them are not suitable for nudism, except for a few ones south of Palaiokastro.

Xerokampos has several sandy bays, not sheltered from the wind. The western part of one of the two large beaches (N35 2’12.60 “- E26 13’20.57”) is suitable for naturism. Several separate small coves are suited for privacy.

The beaches of Diaskari and Langada are two isolated ones east of Makrigialos after you leaving Analipsi. To get to the beach of Diaskari, you need to turn right to the dirt road approximately two hundred meters after Analipsi: it’s the eastern extension of Makrigialos. The main road there turns left. At the beginning of the beach there is a cafe, and the nudist part of the beach is located at the far end near the cliff. You can get to the second beach by crossing a small hill dividing the beaches or by driving along the main road a little further and turning onto the dirt road behind the greenhouses.

Goudouras is the easternmost village on the south coast of Lassithi County with a pebbly beach. The naturist part is at the far end of the beach. You can also use several pebbly bays that you can find on the road from Makrigialos to the Monastery of Kapsa and Goudouras.

A small Chrissi Island is south of Ierapetra. It is well-known because of the shell beach on it. Twice a day a ship sails from Ierapetra to the island. Nudists usually use the western and southern parts of the island.

East of Ierapetra and in the region of Tertsa, there are several small beaches that are sometimes used by nudists.

Paleochora has Pachia Ammos. It’s the main beach in Paleochora; a nice sandy beach with a small site in its western extremity, which is used by nudists. To the east of the town in the direction of Sougia is a dirt road, along which you can find several good beachesGialaskari (Anidri).

Sougia has an extended pebble beach, the eastern part of which was chosen by nudists. It is suitable place for swimming with a mask and is easier to get to Sougia on the sea on a regular scheduled ship than on land.

Psili Ammos beach. There are two ways to get there. You go down by car along a dirt road from the village of Krotos to the place from where you can see the Trachoula gorge below or you use the way from Lentas to Loutra, reaching the same place on a dirt road. Go down the gorge on foot, and in 20 minutes you will reach the magnificent semi-circular beach, surrounded on all sides by rocks with numerous caves.

Dyskos is one of the most traditional nudist beaches in Crete, which is located west of Lentas. The tarmac road running from Messaria is quite complex with lots of turns.

Red Beach is a nude beach next to Matala. The beach is very good, but you can only get to it from Matala by foot, climbing a mountain path, and this path may seem too complicated for many.

Komos lies 5 km north of Matala. The northern part is located close to Kalamaki, but the central part is used mainly by naturists. The beach is open to the north winds, and at the bottom there are stone slabs. Coordinates of the nudist central part are N35 00 ‘51.2 “E24 45’ 37.0”. The beach can be accessed from the north, south and the center, turning off the main road MatalaPitsidia.

Agios Pavlos. The beach can be reached by turning off the main road SpiliAgia Galini, on the road going to Agios Pavlos through Ano and Kato Saktouria. It’s concreted all over. To get to the western nudist beach, you need to cross the rock dividing the two beaches and go down.

Amoudi and Micro Amoudi are sandy beaches east of Plakias, next to Damnoni.

Plakias. The whole eastern part of a very large sandy beach is considered one of the best European nude beaches. You can get there from Rethymnon through the Kourtaliotiko gorge or Kotsifou gorge. The beach is well equipped; there are cafes and hotels nearby.

The beach of Glyka Nera (Sweetwater bay) is located between Loutro and Chora Sfakion. You can get a boat in Loutro or Hora Sfakion, or walk to it. To get from Loutro on foot, you need to spend an hour and a half. The water there is one of the coldest in Crete.

In addition to the mentioned, Crete has many beaches that can be considered nudist, since most of the time they are deserted and you can sunbathe and swim the way you like it. 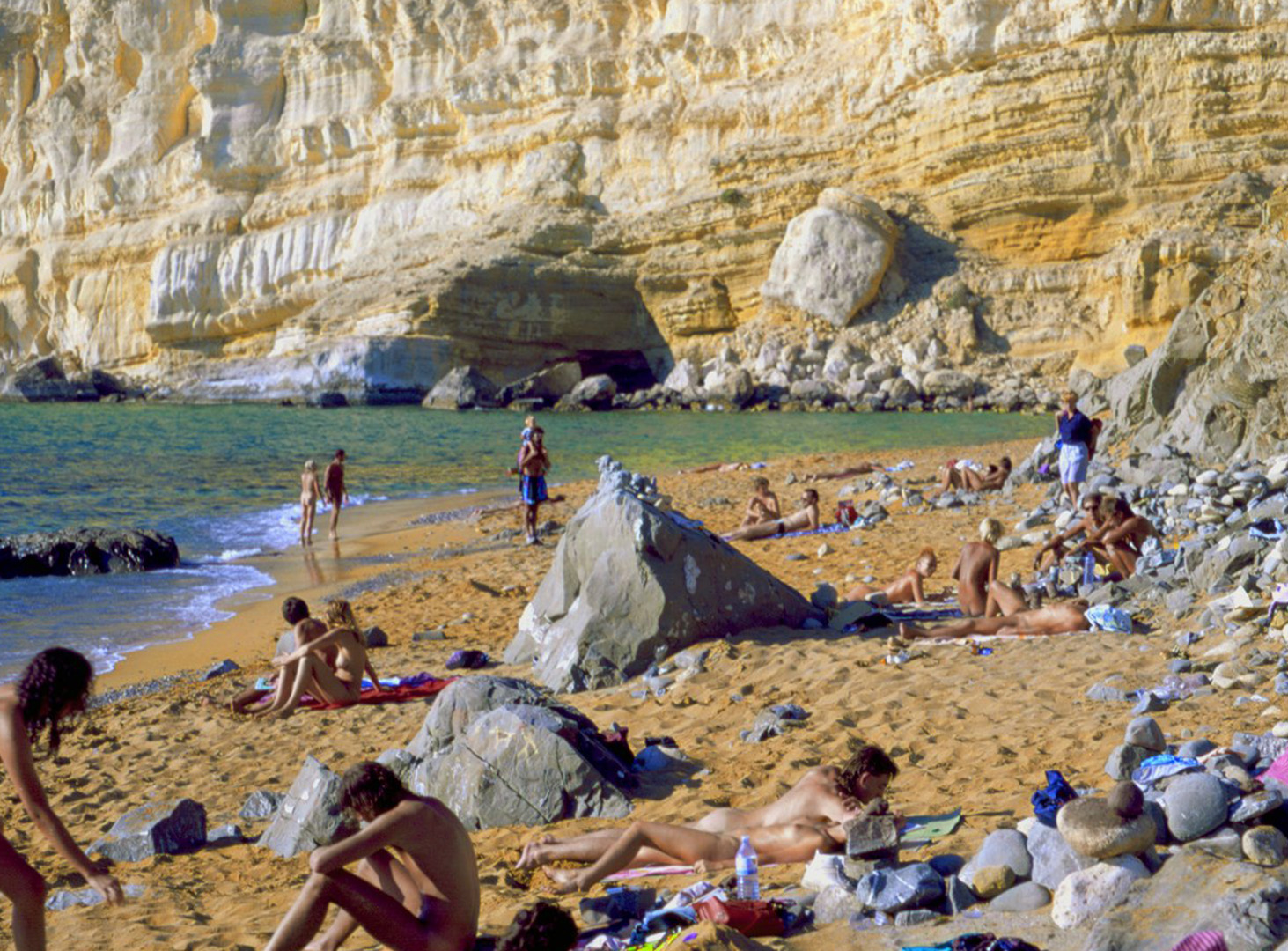 on the materials of the article by Pavel Onoiko