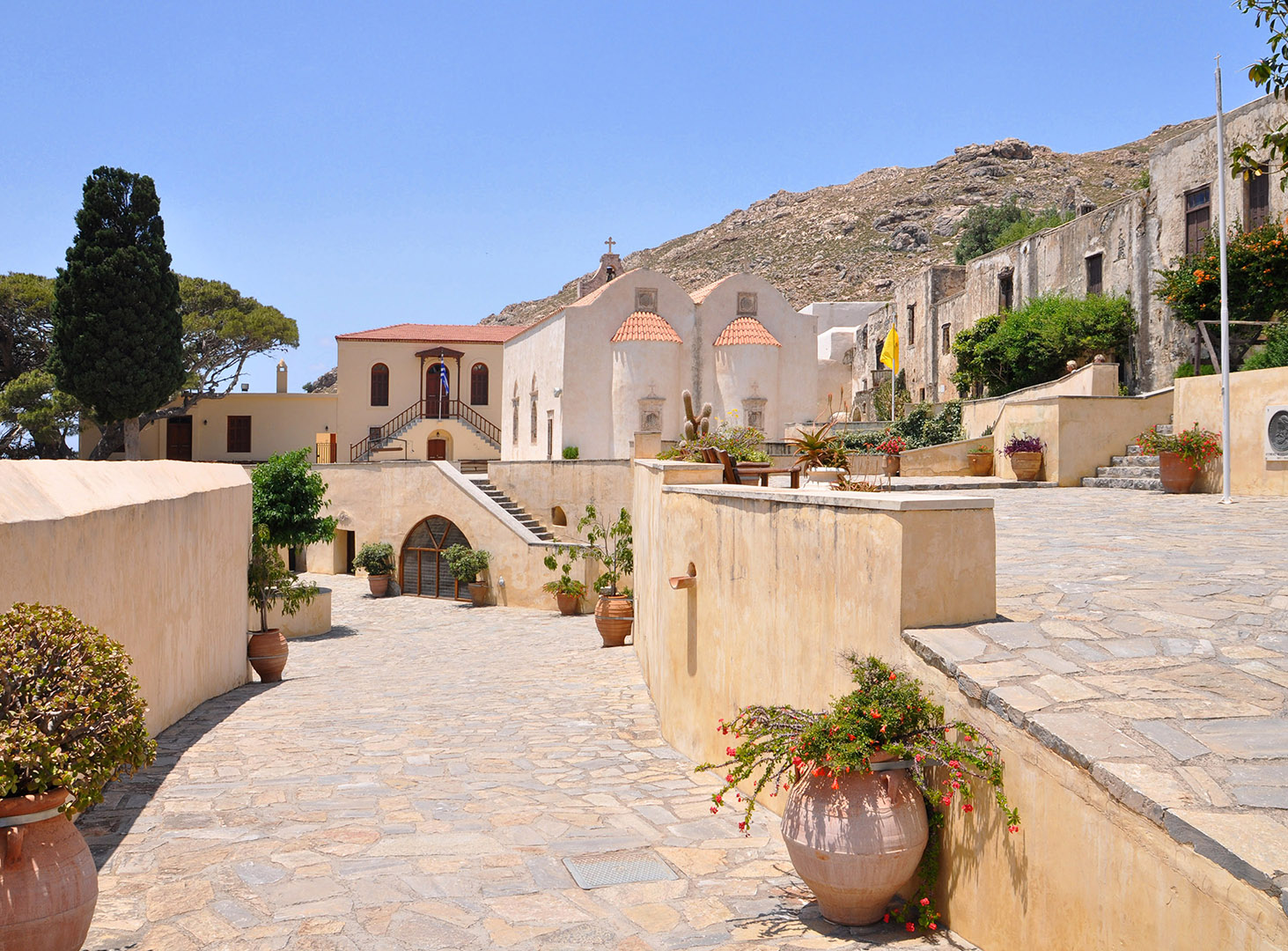 Monastery of Preveli: “…may the Lord protect him from fiery gehenna”

On Crete the monasteries are the centers of life for the residents. The same they have also been in the past, in difficult times; and the monastery of Preveli is not an exception. Its history has many heroic pages related to the confrontation with the Ottoman Turks and Nazi Germans. Therefore, it is on a mountain slope where it’s not easy to get into unnoticed… and from where a stunning view of the Libyan Sea opens. The alien enemies have destroyed it six times: so the Lower Monastery (Kato Preveli) is still not completely restored, unlike Piso Preveli (the upper one). Walking here you can listen to the sounds of the past.

The ancient bell, for example, has on its side a date “1594”: since that time it has been loud calling Cretans for battle or prayer. Or take a look at the plaque in honor of Melchisedek Tsouderos, the local abbot of the early 19th century. In 1821, a detachment was sent by the Turkish authorities of the island with the order to destroy the rebellious monastery. The abbot hearty welcomed the soldier like his relatives: he fed, watered, and put them to bed. When the Turks fell asleep, Tsouderos ordered to pack all the most valuable things and took his monks away from the monastery, thereby saving them from torture and executions.

Past times reminds a stele, on the sides of which there are figures of an English soldier and a monk armed with a carbine. In 1941, English and Australian soldiers retreating from Crete were hiding from the German invaders in the monastery. The local brethren secretly transported them to the sea, to Preveli bay, from where English submarines took them.

The local holy spring will help you to shake off the ashes of the past: wash your face and hands with healing moisture. Rest mentally in the park with flower beds and a mini zoo arranged by monks; and get to know the miraculous Cross of Ephraim of Prevelius, one of the most revered relics in the monastery. In the second half of the 18th century, monk Ephraim of Prevelius created a golden cross, in which basis he placed particles of the Lord’s Cross. Greek soldiers were blessed with this cross; and they still pray at this cross with hope… No matter how many times the shrine was taken from its native walls, each time it came back, as legends say. On a side of the cross you can still read the inscription: “Through the efforts of Father Ephraim, may the Lord protect him from fiery gehenna.”

In the gorge of the winds

2.5 km from the monastery is located the Preveli Beach. But let not rush—look around. Like many roads in Crete, the road to the monastery goes along a deep Kourtaliotiko gorge. It is also called a gorge of winds or a gorge of flapping sails because of the sounds produced among the rocks by winds. At the bottom of the gorge flows the Kourtaliotis River. Collecting all the local streams, it comes to the Libyan Sea already as Megalopotamos, or the Big River. Our Preveli beach is nearby. The gorge is considered impassable, but if, before reaching the monastery, you turn off the road into a stone arch on the side of the road, you can go down to the bottom of the gorge on foot! It is not difficult to find this place: there is a sign on the road to the St. Nicholas Church, which is just below (and you can leave the car in a pocket to the left of the road—just above the arch). From the arch down, there are stone steps and a path that will lead you to the church. Tradition says that St. Nicholas, finding himself in this waterless gorge, touched the cliff with his hand and …five springs opened at once (according to another version—40 streams). In reality, if not forty, then certainly more than five waterfalls are nearby: especially in spring, when the snow begins to melt in the mountains. In addition to the huge stone, behind the church there are many small pebbles pyramids built by tourists as the keepsakes. Let us also build a pyramid for good luck, and… back to the car to go to the beach of Preveli. 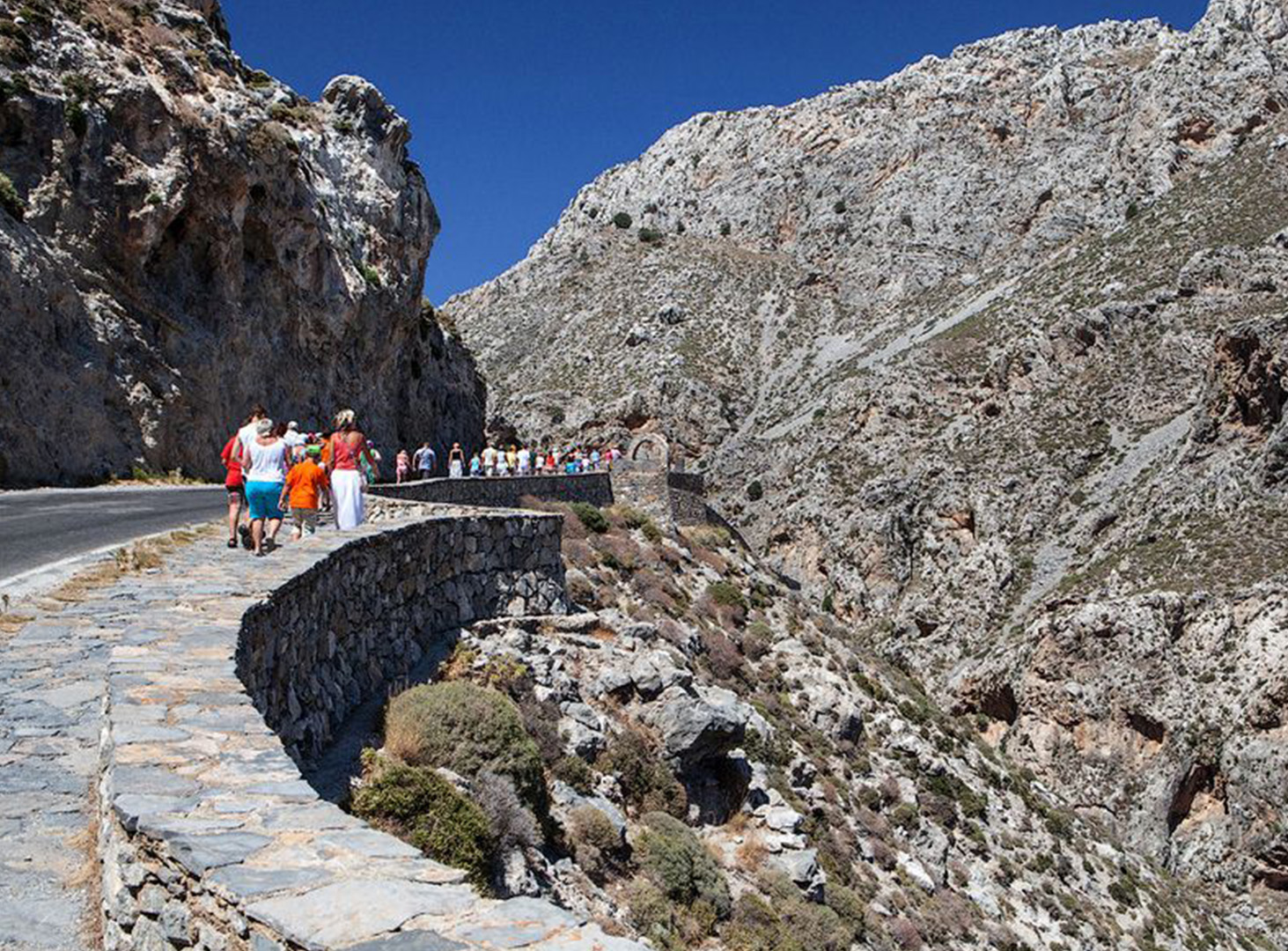 Again about Preveli: the beach

A mile from the monastery, you can leave the car in a parking lot and go on foot down the stone stairs leading to the beach in the bay. Clouds and birds fly nearby, the wind from the sea brings coolness. Only after 15 minutes you are at the wonderful lagoon of Limni Preveli formed by the “Big River” Megalopotamos at its mouth.

You can easily wade across this lake (limni in Greek) and choose where to refresh your hot body—in the Libyan Sea or in the freshwater river. There are shadows, as much as you want: date palms grow right by the water, embracing both the bay and the banks of the river. The palm grove is here the second largest after Vai, but, they say, it is even more picturesque; and the local beach is not crowded. Palm trees have been badly damaged by the fire in August 2010, but the grove recovered surprisingly quickly; and almost no traces of the fire are seen now. The sea is here cooler than usual around Crete, due to the water of the mountain river but amazingly clean and affectionate. It is better to take an umbrella and a mat out of your car: the beach has little services, but you can satisfy your hunger in a local tavern, where, they say, geese walk among the tables begging for food. You can also count on renting catamaran and boat. By the way, if you are not strong enough to go up to your parking lot, says the Internet, you can call the phone number indicated on the beach billboards, and a boat will come for you to take to the village of Plakias for a few Euros…