There are magical places in Crete and not easy to get to. For example, Loutro, a small isolated village and bay on the south coast, sheltered by mountains. There are no highways, so you can get to Loutro either by sea—from Chora Sfakion or Agia Roumeli—or by walking trail: about 5 km from the village Anopolis, but it’s worth it! You will see a picture with boats hovering on almost invisible water; and that’s it—you are lost! Loutro will dream of you at night and invite you to …

The inaccessibility of the town and the lack of vehicles attract people who want to relax in peace and quiet away from places of mass tourism. Here you can escape from the hustle and bustle of civilization, look at the mountains and gorges, hike along the coast or in the mountains, ride a catamaran or canoe, go diving or just swim in the clear and warm azure sea. The beach of Loutro is pebbly, has sun loungers and umbrellas. Although the coastal strip is narrow, the village has a small boat pier, as well as taverns and cafes for delicious food, and refreshing drinks. 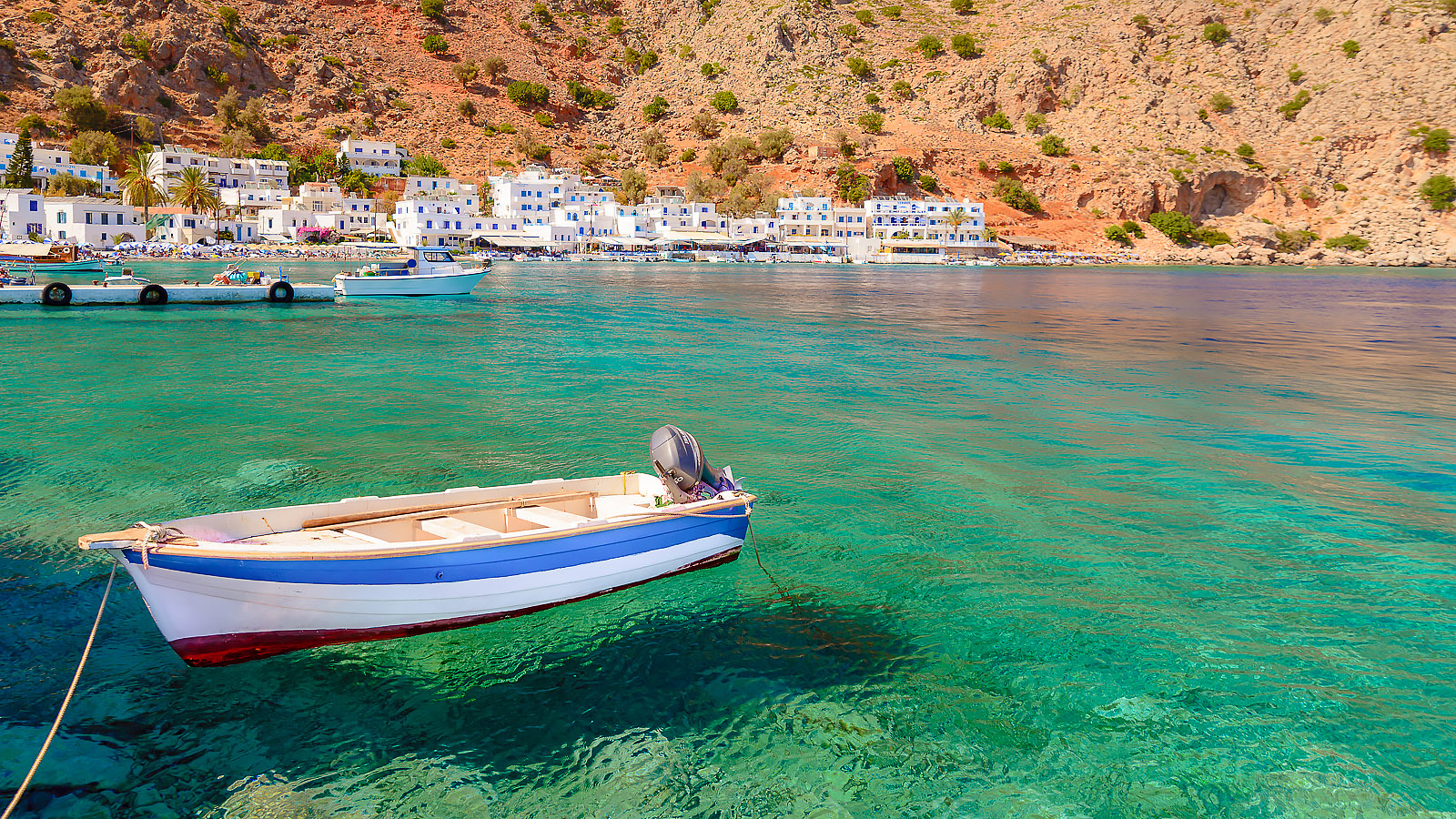 The ancient town of Phoenix once flourished here: it was the port of the independent city of Anopolis. Later it was chosen by pirates until the Venetians drove out the robbers and strengthened the town with a fortress. The Turks replaced them and built a fort over the bay, the ruins of which have survived to this day. During the uprisings of the Cretans against the Ottomans, ammunition for the rebels was delivered to Loutro. In neighboring Anapolis was born Yiannis Daskalogiannis, who raised a revolt against the Turkish occupants.

Loutro attracts not only with its rich history and the remains of fortress in the vicinity. The tender Lybian Sea seems to shake Loutro in its embrace. The bay is sheltered from the winds and is the quietest spot on the southern coast of Crete. The sea is almost always calm here. «Loutro» means “bath”—many storage containers for water supply of Anapolis were found nearby—but I want to translate it as “bowl” designed to drink silence, beauty and pacification …

There are five dozen local residents whose main job is fishing, and they welcome a few tourists. In the off-season, the villagers are practically isolated from the outside world.

It is best to come here on vacation for a couple of days. Approaching Loutro by boat, from afar you can see picturesque blue and white houses in the Cycladic style, located in a narrow coastal zone of a cozy bay.   You will not find here any big hotel or a vibrant nightlife, but a place to stay is available as well as delicious lunch and dinner. They say that nowhere else seafood is cooked like in Loutro. Here all hotels are guest houses with bright comfortable rooms, which offer views of the sea and bay, but the number of rooms is limited, so a free room should be booked in advance.