Vacationers on the island of Crete will be sure to be offered a tourist walk along one of the many gorges of the island. The most famous is Samaria. It is a national park serving to protect the unique nature of the Lefka Ori massif, and especially the endemic Cretan mountain goat Kri-kri. Samaria is the largest gorge in Europe: its length is about 13 km and its width varies from 3.5 to 300 meters. Walking along it will not be possible for everyone, so you can choose a simpler route, for example, Mili Gorge, located a few kilometers from Rethymno. It is incredibly beautiful and easy to pass; the length of the trail is 2.2 km.

The name of the gorge comes from the Greek word Μύλοι—“mills”. There are really a lot of unusual old water mills in the gorge—they form entire cascades on the slopes. True be told, most of them are now destroyed. 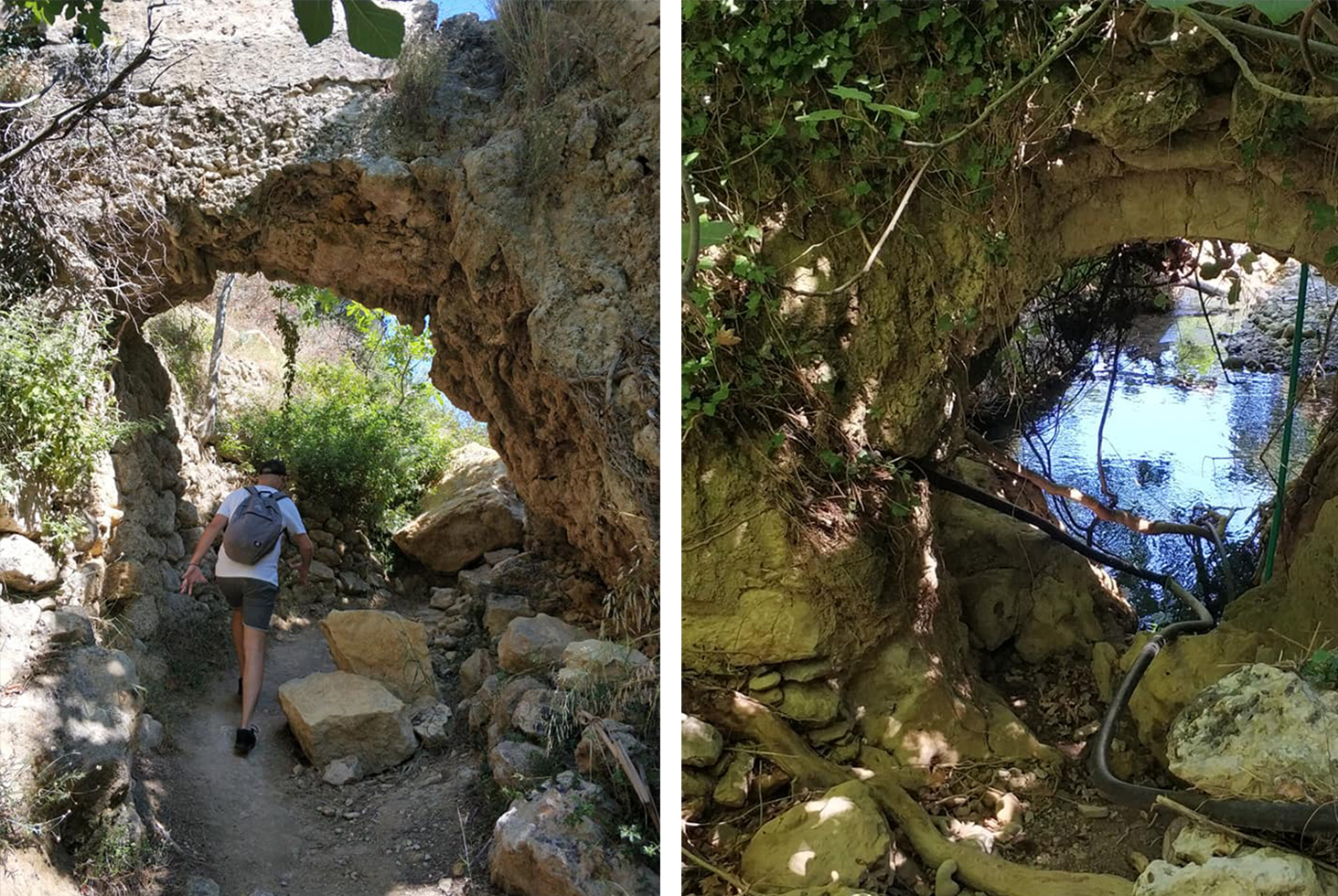 In the Myli Gorge there were two villages (Pano Myli and Kato Myli, i.e. the Upper and Lower Myli), whose inhabitants were millers. In the gorge, rich in water, they have built aqueducts and dozens of water mills, on which the grain brought from Rethymno and the surrounding area was ground. Unfortunately, the unsatisfactory condition of the slopes of the gorge and the increased risk of landslides caused local residents to leave both villages and move to the new Nea Myli. By 1972, the resettlement was completed, the old villages became desolate over time, and the mills became a true story…

Water mills have been known in Crete since Byzantine times. They worked until about the 1950s, and then they were replaced by electric and diesel ones. Interestingly, during the German occupation, at least 10 mills worked in the Myli Gorge, because there was not enough fuel for the diesel mill in Rethymno.

In the 1960s, Crete switched to a more profitable cultivation of fruits and vegetables. Grain cultivation and grinding were minimized. Nowadays the water mills of Crete are mostly only historical monuments despite attempts to restore them. Once they were a serious alternative to wind mills. The wind, as a natural element, is very unstable. In search of good wind, they tried to build mills both on high slopes (in Vrouchas, for example) and in mountain valleys (on the Lasithi plateau). It was not easy to deliver grain to these places for grinding. For water mills with a horizontal wheel, you only need a gorge with a small stream and a lowering relief, and Myli Gorge is just that one.

How did the mills work? 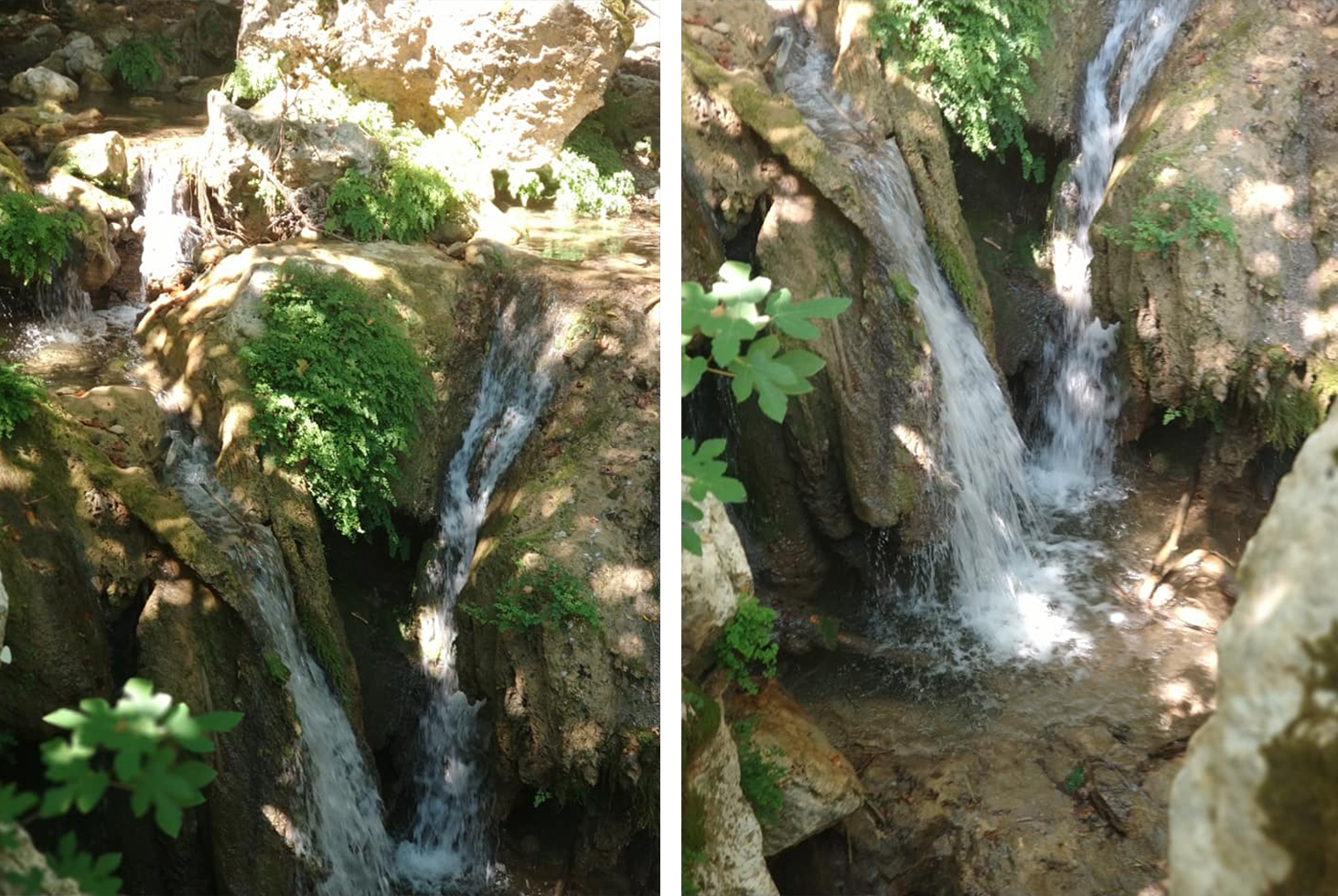 A stream of water was directed along an artificial stone aqueduct to a water tower on the roof of the mill. From the tower, along a vertical or slightly inclined gutter, water rushed to the lower part of the mill and fell on the blades of a horizontal wheel, bringing it into rotation. Millstones were installed on the axis of this wheel in the upper part of the mill and grinded grain. Thereafter, this water was used many more times, for example, for washing wool or in the next mill down the hill. Thus, one water source worked for a whole cascade of mills.

What to see in the Myli Gorge

One of the locals, Evangelos Driyianakis, restored the house in which he was born in the old village of Myli and turned it into a tavern. In this cozy tavern by the side of the mountain after a walk, you can have a tasty meal and simply disappear into the atmosphere of this incredibly beautiful place. Interestingly, the tavern is located on the opposite (relative to the road) slope of the gorge. In order to deliver products and other goods to it, it was necessary first to lower them down to the bottom of the gorge, and then again lift them up. It was uncomfortable and hard. The problem was solved in a very original way: a cableway was laid through the gorge from the road to the tavern, along which groceries are now delivered.

Mostly tourists enter the gorge through the descent opposite this tavern. Going down, you will meet the first of four local churches. Behind the church there will be a small bridge which you need to cross to the other side of the rivulet. Then the path turns and goes in the opposite direction—do not be alarmed, this is the right road. After a couple of hundred meters, you will come to the place where the cable car begins. It will be the old village of Pano Myli, now being restored in a traditional style. There is also a tavern. Nearby are several renovated traditional village houses for everyone to spend a night in the gorge. 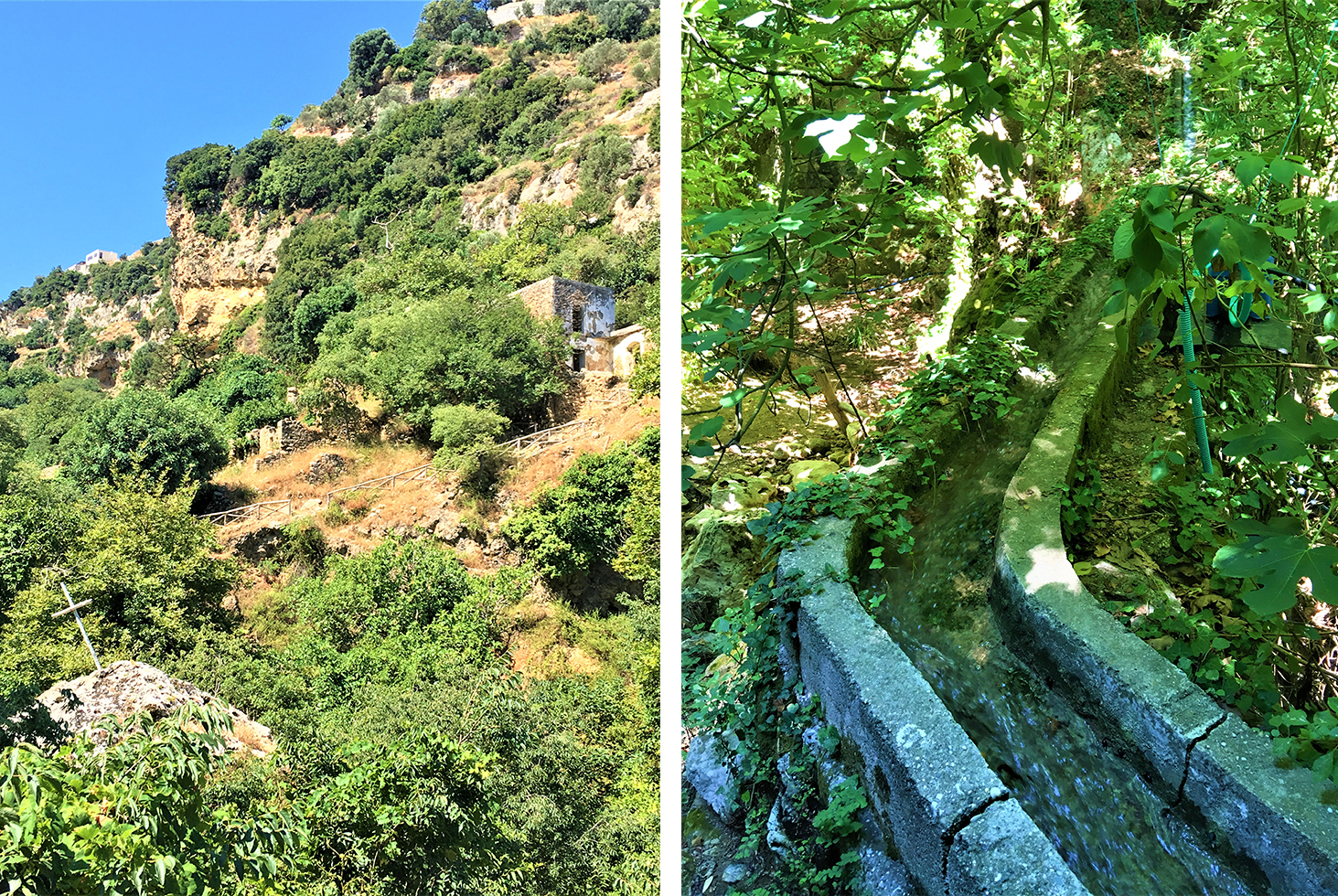 A few words on churches in the gorge: the church of St. John is built right into the slope, and the churches of St. Anthony and of Five Holy Virgin are built next to the source, which is quite powerful. Its water flows right from the places of temples and runs along the path down the gorge.

If you go further along the path, you can see the ruins of mills overgrown with greenery as well as the half-restored mill, where the principle of its operation is visible. They say that there were more than 30 of them here, so Myles is really a gorge of mills. Many aqueducts are still working: local residents use them to water gardens. Life did not stop here, it just changed…

A rather full-flowing rivulet flows along the bottom of the Myli Gorge, which does not dry out even in the middle of a hot summer. It forms many picturesque small waterfalls and backwaters, and everything around is surrounded by greenery. You feel like a fairy tale hero, who fell into an unreal world, so atypical for Crete!

The approximate time of a one way slow passage is 1.5-2 hours.
The most convenient way is to get to the gorge by car or taxi. You have to leave car along the road: there is no special parking.

There are two ways to go back: to go through the gorge in the opposite direction or at the end of the gorge from the tavern (in the area of ​​the village of Xiro Chorio) you can call a taxi and get to your destination.