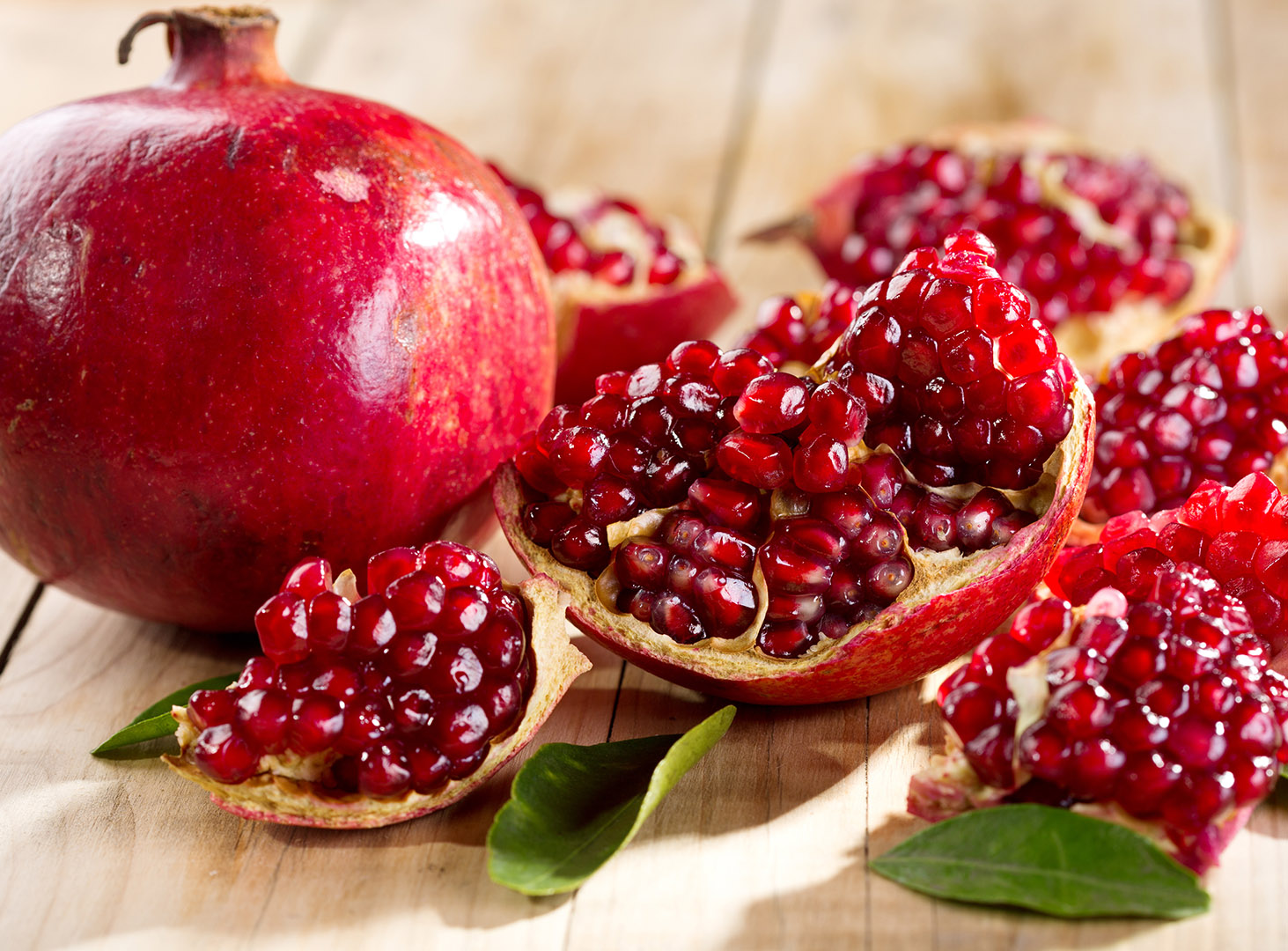 On Crete, pomegranate shrubs grow literally everywhere: in gardens, on the streets of cities and villages and even in gorges. Blossoming, they are incredibly beautiful. They say that people have invented the shape of the crown after looking at the sepals with surrounding petals of a pomegranate. After fruits appearing, you will every time wondering how the thin branches are holding these weighty “treasure chests”: inside each there are up to a thousand ruby arils!

Even the ancient Greek inhabitants of Olympus appreciated this treasure. The pomegranate has always been considered to be the “food of the gods.” The Greeks believed that the pomegranate contains the blood of Dionysus, and therefore this fruit is a symbol of vitality and immortality. The science is silent on specificity of Dionysus, but as for the “life force”, there are some data…

– Its fruits contain vitamins A, B, C, as well as iron, phosphorus, potassium, selenium, sodium necessary for the human body.

– Due to its high content of vitamin C, the use of pomegranate strengthens the immune system.

– It has components that protect against skin cancer, breast and prostate cancer.

– Antioxidants in it slow down the aging process.

– It has a beneficial effect on the heart;

– Helps in the restoration of liver cells and

For a good reason the Egyptian pharaohs preferred pomegranate juice to all drinks, considering it a miraculous remedy that strengthens not only the body but also the spirit. Moreover, in Ancient Babylon it was believed that the pomegranate eaten before the battle makes the warrior invincible. 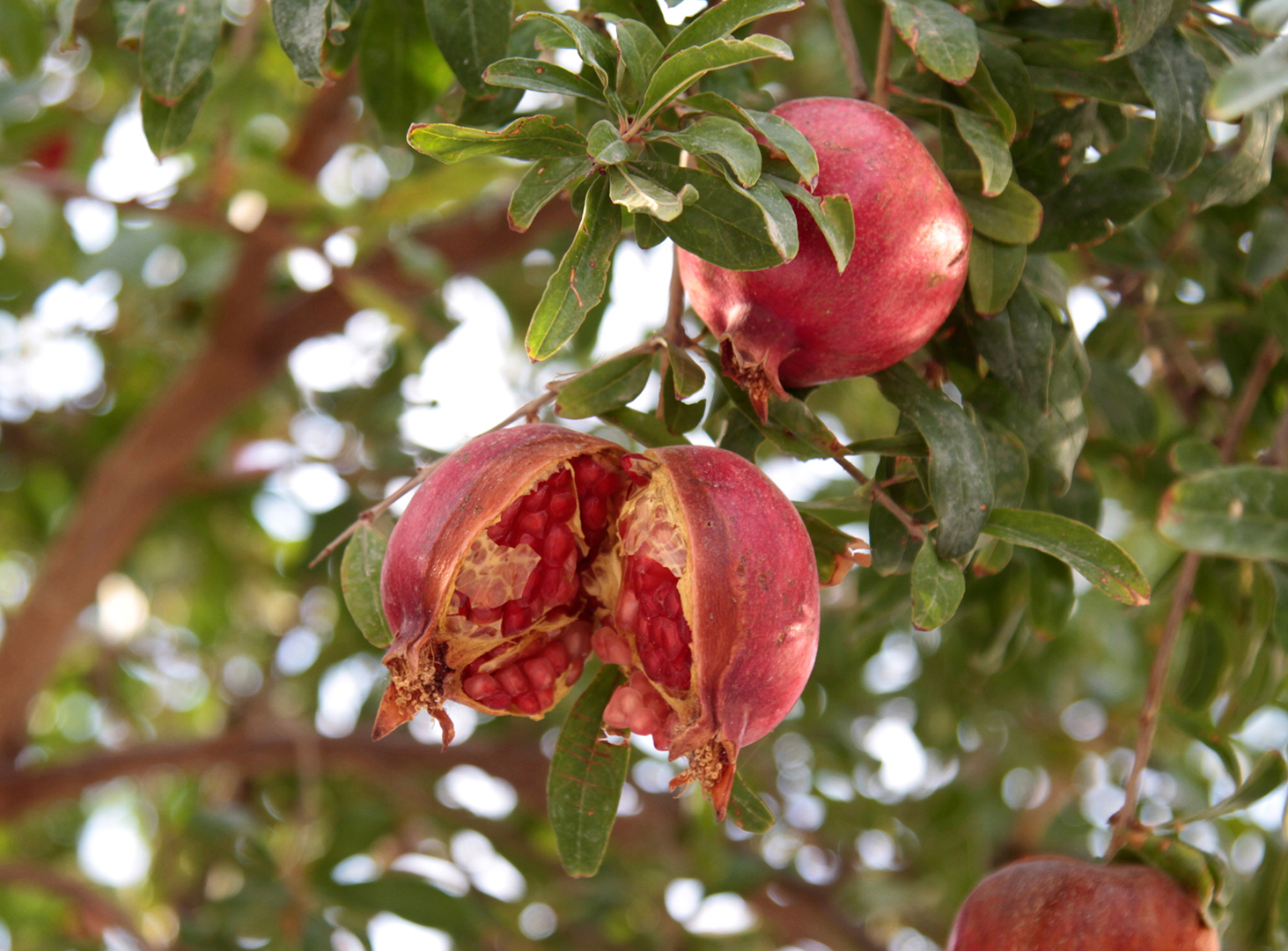 Pomegranate as a fruit of love

“Your temples behind your veil are like the halves of a pomegranate…” – read we in the Song of Songs, where pomegranate is a symbol of love and sensuality; its red color is associated with fire and passion. By the way, it is known that the ancient Jews began to cultivate pomegranate more than 5000 years ago and called it the “paradise apple”; and the biblical Tree of Knowledge, according to some versions, was just a pomegranate tree. So, quite possibly, the curious sinner Eve was seduced by the Serpent who proposed just a “pomegranate” and not an apple. In ancient Rome, this fruit had two Latin names—malum punicum and malum granatum. The first literally meant a “Punic apple” (for the Romans, the Phoenicians were a people who founded Carthage in Africa, where the best pomegranates were thought to grow). The second name, literally meaning “granular apple”—malum granatum, was a basis for the names of this fruit in other languages, including Russian.

Back to our “fire and passion” … According to a legend, the first pomegranate shrub was planted by the goddess of love Aphrodite on the island of Cyprus in memory of her beloved Adonis, who was killed by a wild boar; and the scarlet flowers of pomegranate, flying around with gusts of wind, do not live as long as the life of the beautiful Adonis did not last long. They embody passionate love, whereas the fruits are symbols of marital fidelity and a strong family. By the way, Hera, the patroness of marriage, was portrayed with a pomegranate in her hand. Until now, a good tone is to bring a pomegranate as a gift, say the Greeks; and the Olympian deities themselves ordered to break a pomegranate on the threshold of house on New Year’s Eve: the more arils fly apart, the more happiness and prosperity will be in house in the new year. Newlyweds also smash a pomegranate before they cross the threshold of their home: the tradition is alive. 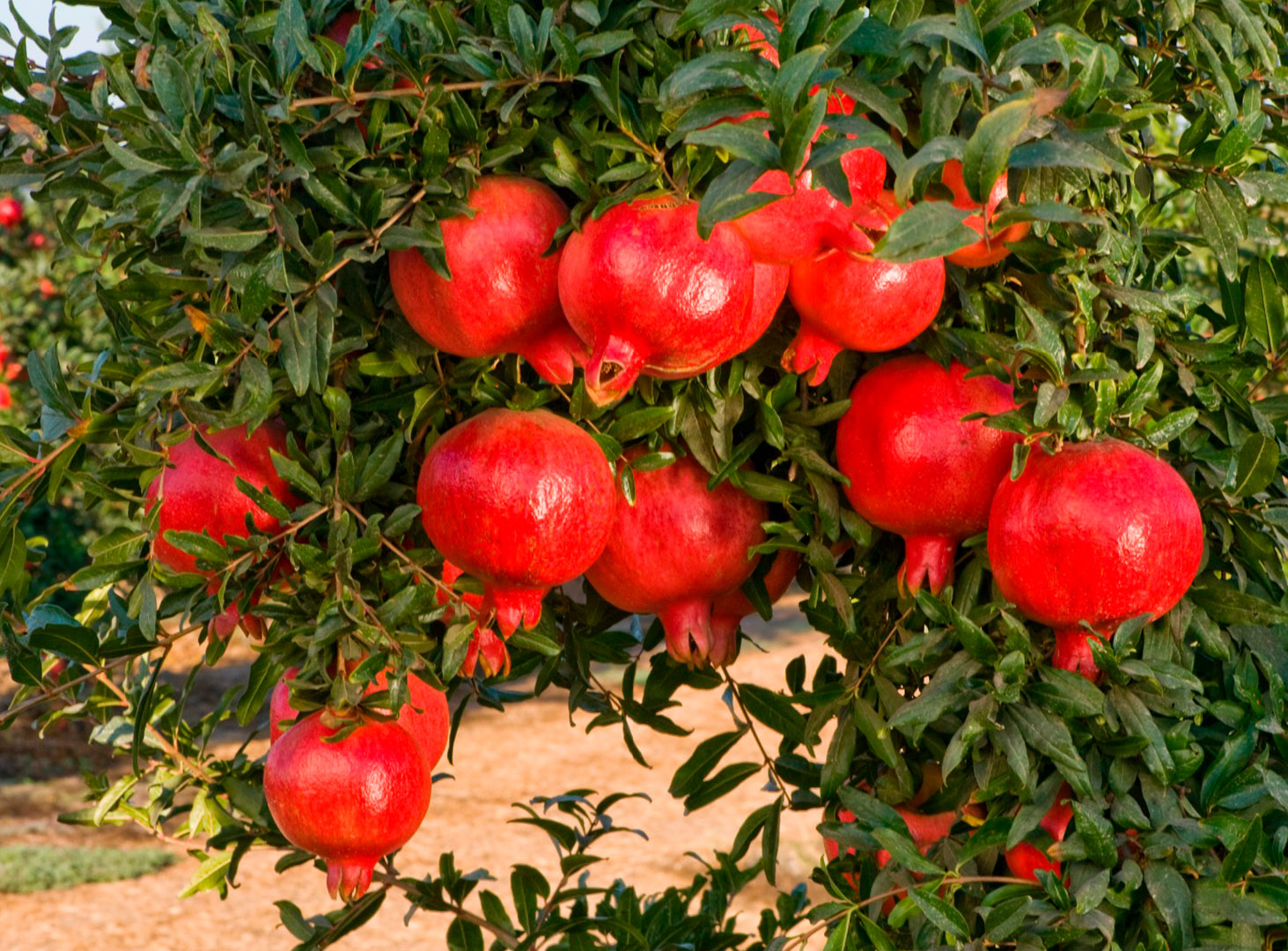 Really, our ancestress Eve was not in vain seduced by a pomegranate! Its use for the body of the beautiful half of humanity today has a scientific justification: vitamins of youth and beauty A, and E maintain the attractiveness of pomegranate lovers. A pomegranate diet allows you to quickly throw a couple of extra pounds without compromising health. A mask from pomegranate husks will relieve acne and the pomegranate juice will help deal with oily, and shiny skin. In addition, the fruits containing phytohormones allow women to remain sexually attractive for many years.

However, for men it is worth sharing the love of their chosen ones for pomegranates. Even the ancient Chinese knew: if one eats pomegranate arils with seeds, he will not have problems in his intimate sphere and those who spit the seeds will be jealous of his passion!

In modern Greece, the cultivation of pomegranates is considered to be a relatively new industry. It just so happened that, despite of ideal climatic conditions and old traditions, Greece imported for a long time a significant amount of pomegranates from Turkey, Iran, Egypt, India and Israel. But more recently the situation began to change radically. The prolonged economic crises in Greece helped the local market reorient itself towards promising new crops including pomegranate. Today, more than 20 thousand hectares are cultivated; and interest in this culture from Greek farmers is constantly growing. Although Greece’s share in the cultivation of pomegranate is small, the Greek still managed to take their place: today Greek pomegranate is exported to many European countries, and Russia is a task of the very near future.

Pomegranate fruits ripen in early autumn: in September-October, depending of the variety. Harvesting is only manual. On an industrial scale, the pomegranate husk is used for the production of tannin and animal food; the seeds are used for the manufacture of essential oil (widely used in cosmethology) and the arils—for the production of natural pomegranate juice, syrups, vinegar, liquor, tea, marmalade and seasoning for various dishes.

By the way, pomegranates can be stored up to seven months in a refrigerator by high humidity, so you can bring a basket with pomegranates from Crete and replenish your supply of “vitality”, and “fiery passion” obtained in autumn leave.