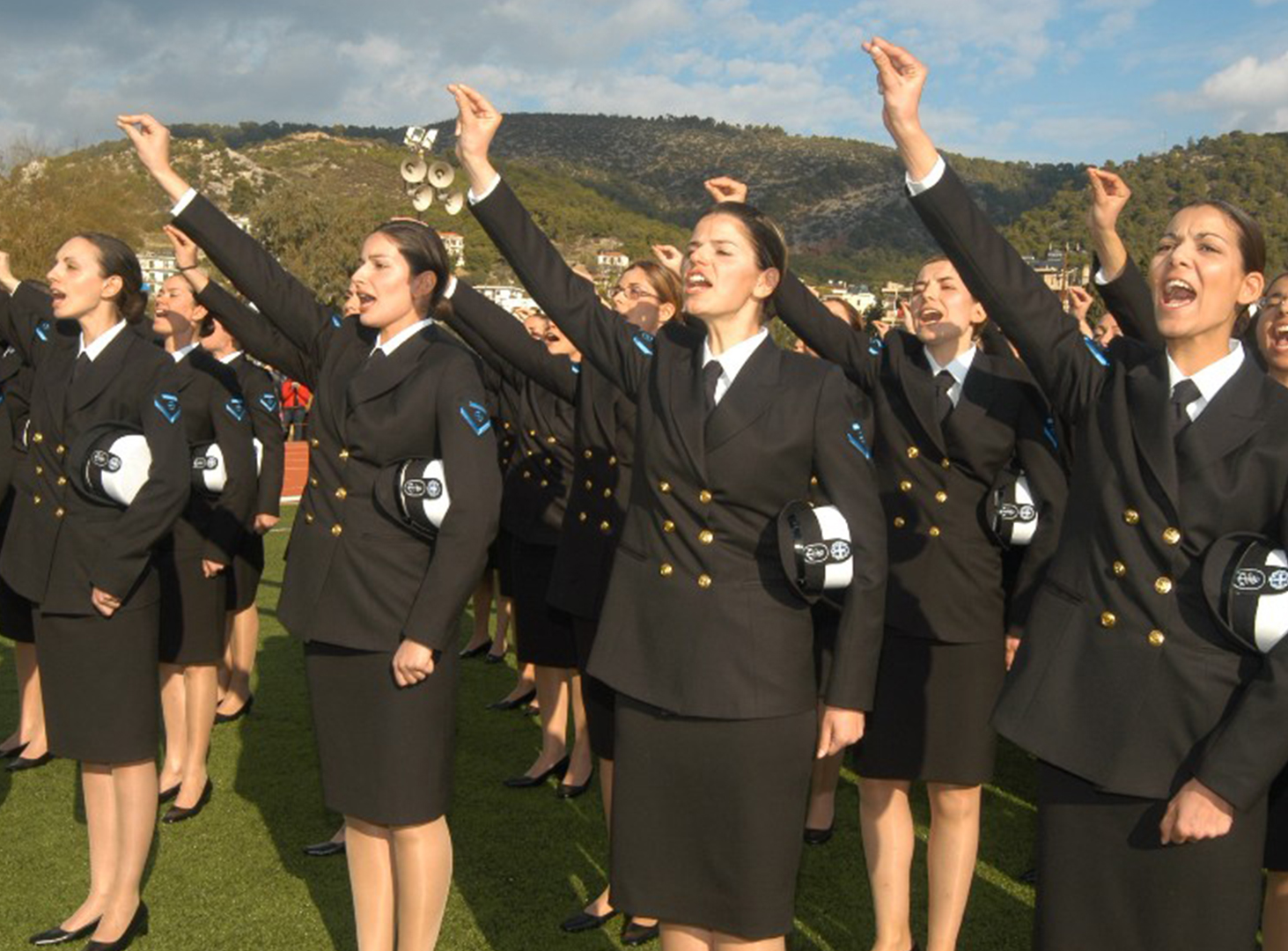 Conscription is compulsory in Greece. The contract system is gradually beginning to be introduced, but it’s not yet fully operational. Therefore, in the coming years male Greek citizens will not avoid conscription.

Greece stated once that its armed forces would be transferred to a professional army, but these plans had to be reviewed, because of financial difficulties: the budget could not provide the salary for planned to be paid professional soldiers. The abuse of deferments was another problem faced by the Greek military department: in 2005, 66% of draftees benefited from deferments. In 2009, the tour for conscripts going to the ground forces was reduced to nine months, but in the navy and air force they continued to serve a year.

Quite many conscripts may serve a reduced tour: for example, people permanently residing abroad from 11 years old, whose parents are not employed by the Greek state, are required to serve three months; citizens who moved to Greece before their eleventh birthday from Albania, Turkey or countries of the former Soviet Union (except Estonia, Latvia, Lithuania) are required to serve three months; scientists involved in outstanding research may serve three to six months, but are required to buy off the remaining duration of the normal tour at 293,47 euros per month not served; conscripts, who support children, elderly parents or younger sisters or brothers, serve eight months.

The following categories of citizens are not required to serve in the armed forces of Greece:

People with serious health problems, including the mentally ill;

Fathers of more than three children;

The eldest son in a family, whose members cannot support themselves;

Fathers whose wife has died or is incapable of work and whose children cannot support themselves;

Foreigners living in the monastic community of Mount Athos. 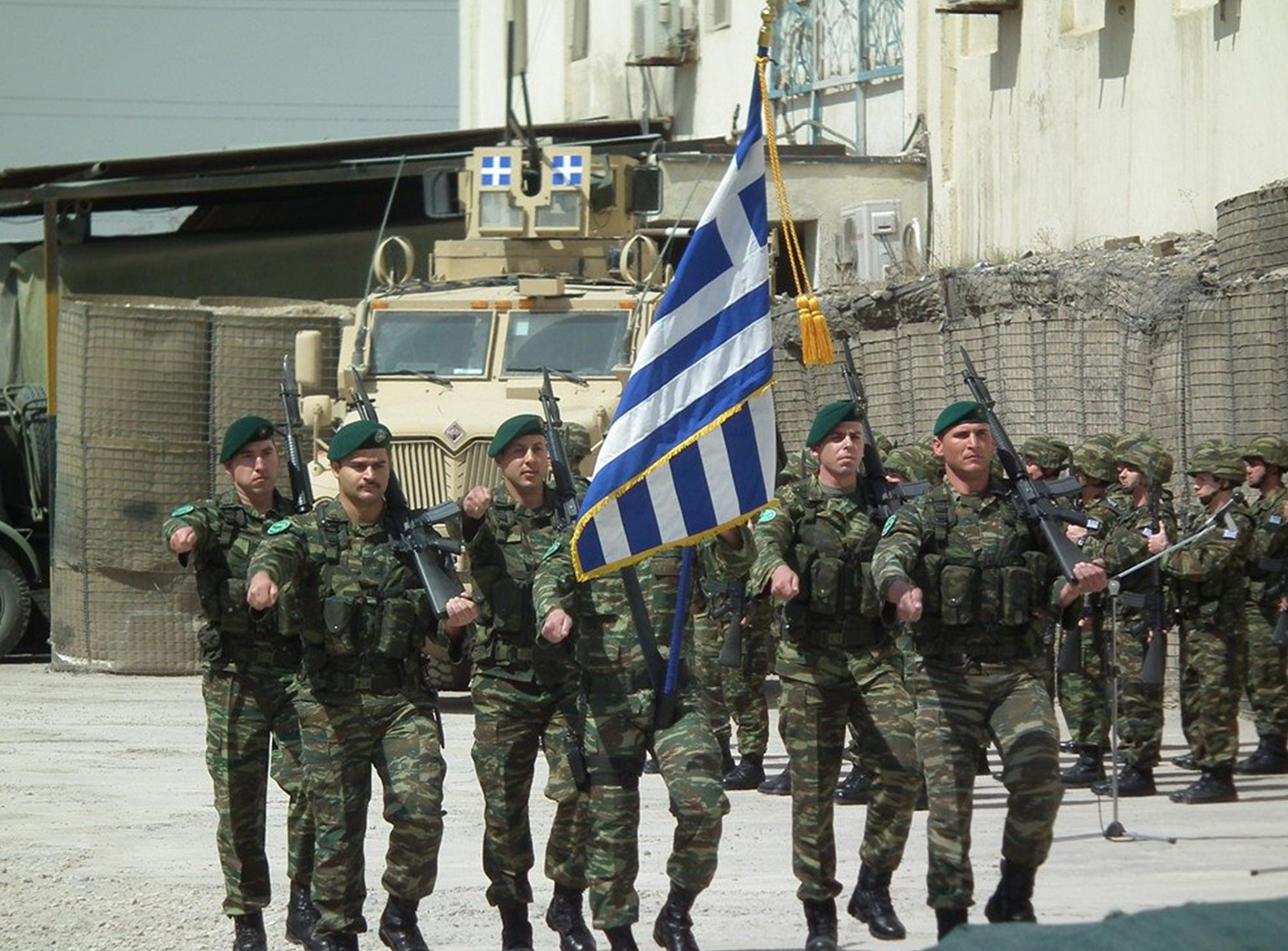 Conscripts are absolutely all male citizens aged 19 to 45 years, even disabled people. The legislation also provides for the right of women to be volunteers in the Greek armed forces.

The usual duration of compulsory military service is short: only nine months. Sailors serve twelve months. Students are granted a deferment for the duration of their studies. So, for example, the reason for a deferment can be a postgraduate study. Some benefits are granted to married conscripts who have young children and ones from large families.

There are also deferments and reduced tour due to health reasons. In 2001, the Constitution introduced an item on the conscientious objection to military service. For such people in Greece, there is service without weapons (13 and a half months), and an alternative service (17 months).

It’s very interesting that, according to the latest changes in the legislation, the clergy members are not longer exempted from the army and are obliged to serve on a common basis.

In 2004, the Greek Parliament passed a law stating that men over the age of 35 would be allowed to buy off their military obligation after attending 45 days of basic training. Currently the amount required to do this is 8,505 euro. This price tag (810 euro for every month not served) is calculated based on the income of professional soldiers adjusted for taxes. Therefore, it is considered as indirect taxation, on out-of-country and re-repatriated Greeks, as that amount is basically salary for an entire year in Greece.

For conscripts, one is trying to find place of service closer to their home. A leave is very simple: some conscripts even serve near home and go every morning from there to their service place like to a job. Hazing here doesn’t exist, and it’s doubtful that you be able to explain to a Greek what it is. He would hardly understand you how this is allowed.

To date, those who have served are still enrolled in the reserve and are subjects to call for irregular trainings (one to ten days).

The Greek world “evzone” means “well belted” and goes back to an ancient Greek phrase dating to Homer. They appeared in the 19th century during the War of Independence as a mountain unit and light infantry of the Greek army. Today, this is an elite unit and a hallmark of Athens: a Guard changing ceremony is a show off in the city, which gathers crowds of tourists.

In 1867, four battalions, formed mainly from mountaineers, were used to protect the borders. That was the starting point for the evzones’ history. In all Greece their name became synonymous with the words “courage” and “heroism”. The evzones were singled out by exceptional courage in the struggle against the German invaders.

Today this unit carries the honor guard at the presidential palace and the parliament building. Within two days, each evzone is three times in one-hour guard.

A great honor for any serviceman is to be a member of the elite guards unit. Strict requirements are applied when selecting candidates for evzones. So, for example, they should have attractive appearance and growth of not less than 74 in, as well as psychological stability, endurance, patience and excellent health. Recruits undergo intensive training, consisting in difficult special five-week training.

Each element of the bright and unusual uniform of the evzones has a certain symbolic meaning. Even the colors have it.

The phareon is a scarlet wool beret, decorated with a long silk tassel of black color. The scarlet color symbolizes the blood of warriors shed for freedom and independence, and black is the color of sorrow for the fallen on the battlefield. 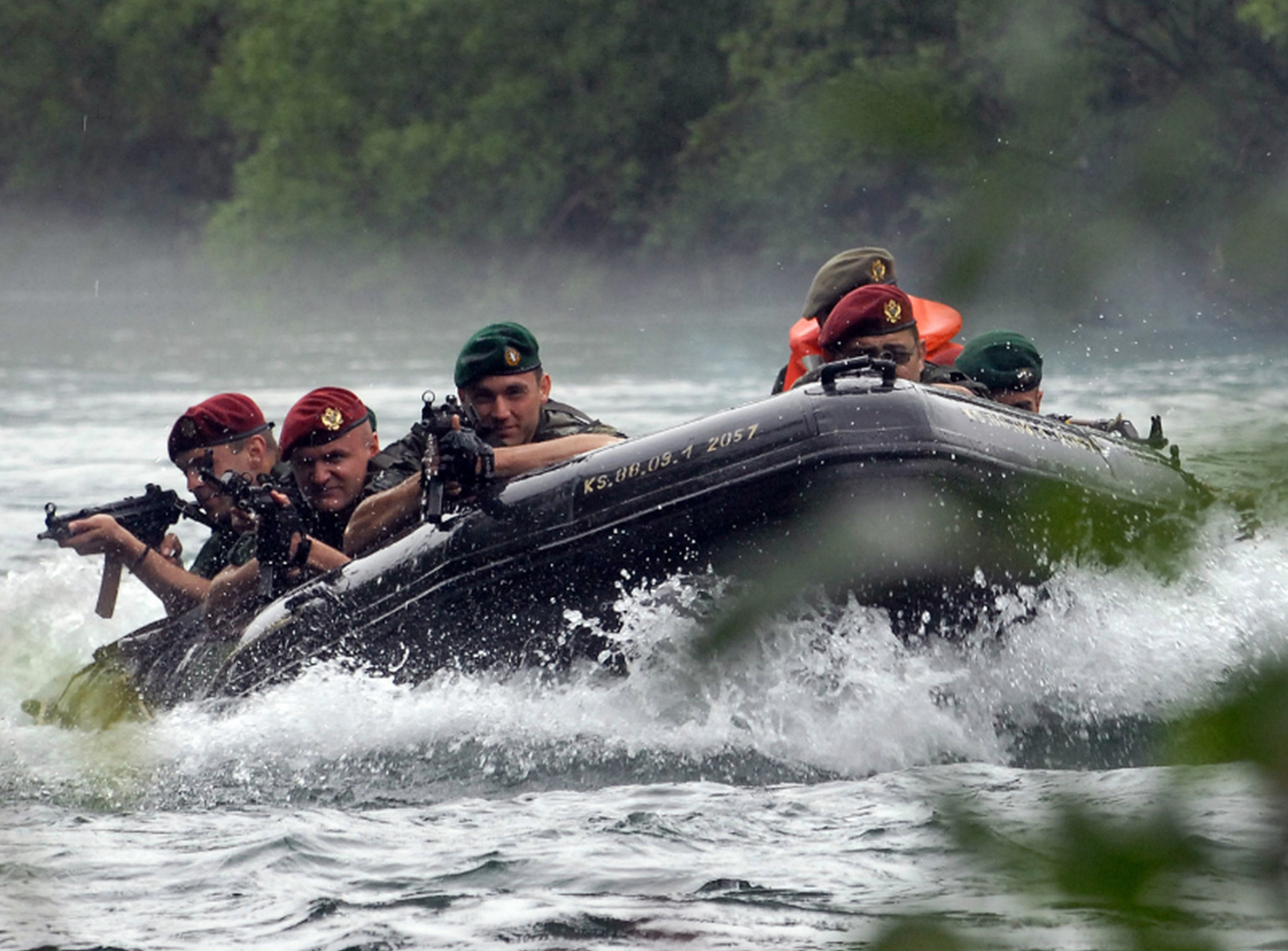 400 fold of wool pleated skirt (foustanella) symbolize the years of the Ottoman domination in Greece.

White cotton shirt with wide sleeves: its color is considered a symbol of freedom; knowingly it dominates in the uniform of evzones.

White woolen stockings are fastened under the skirts with a leather belt.

Kaltsodetes are black garters, decorated with brushers, fastened to the bootlegs. 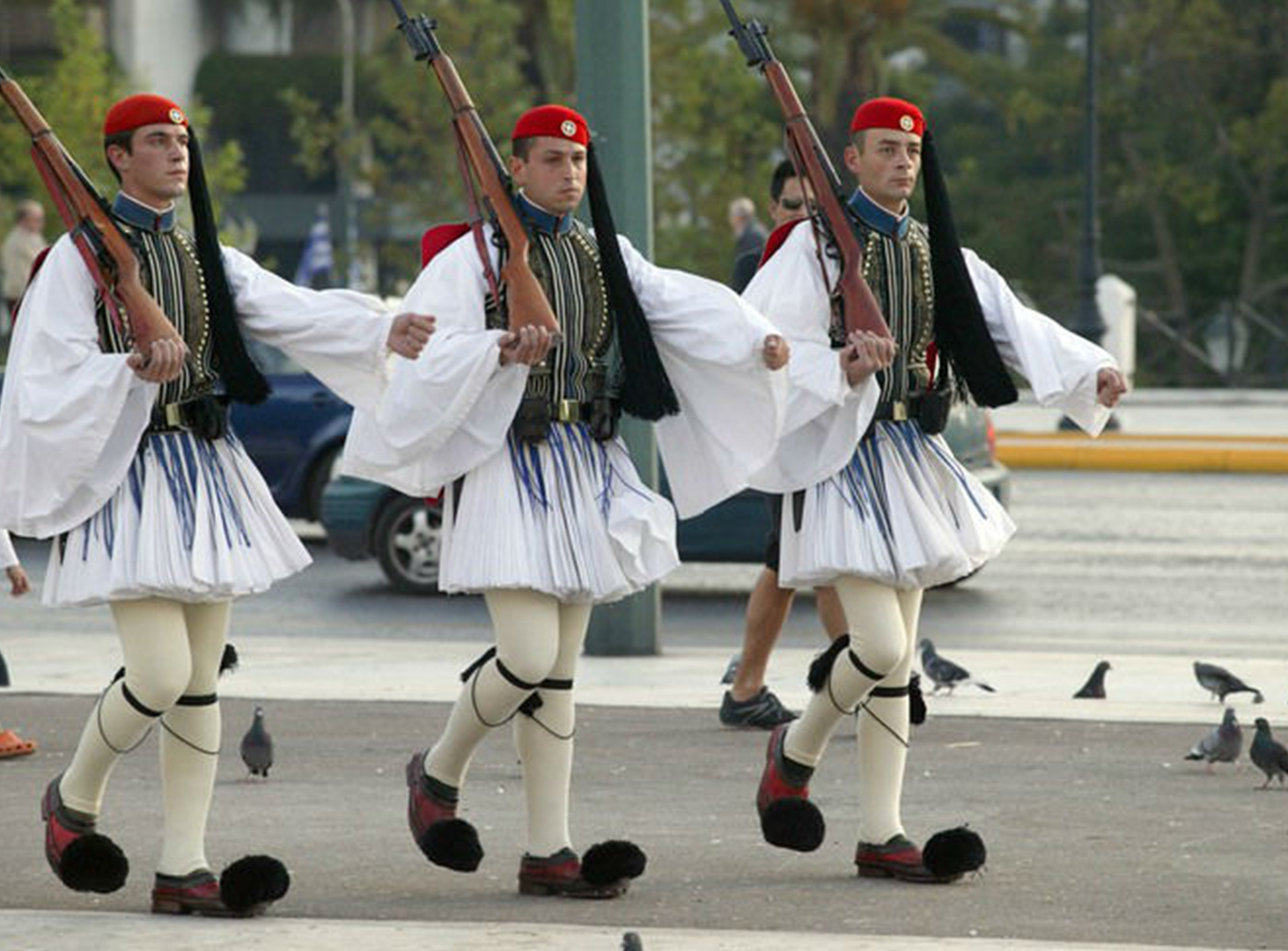 Tsarouhia are distinctive footwear of evzones: leather shoes with large black pompoms on the noses. They look very funny with their 60 nails in the sole. Everything of these unusual uniform elements has an applied meaning and even its history. So, for example, nails it the tsarouhias’ soles make shoes less slippery and add extra sonority to the guard’s step. According to one version, large woolen pompoms served initially as additional warming of the toes, protecting them from frostbite. Later they hid sharpened blades in them as a self-defense weapon. Tsarouhia are made entirely manually and exclusively from natural materials. The weight of firsts is about 6,6 lbs. 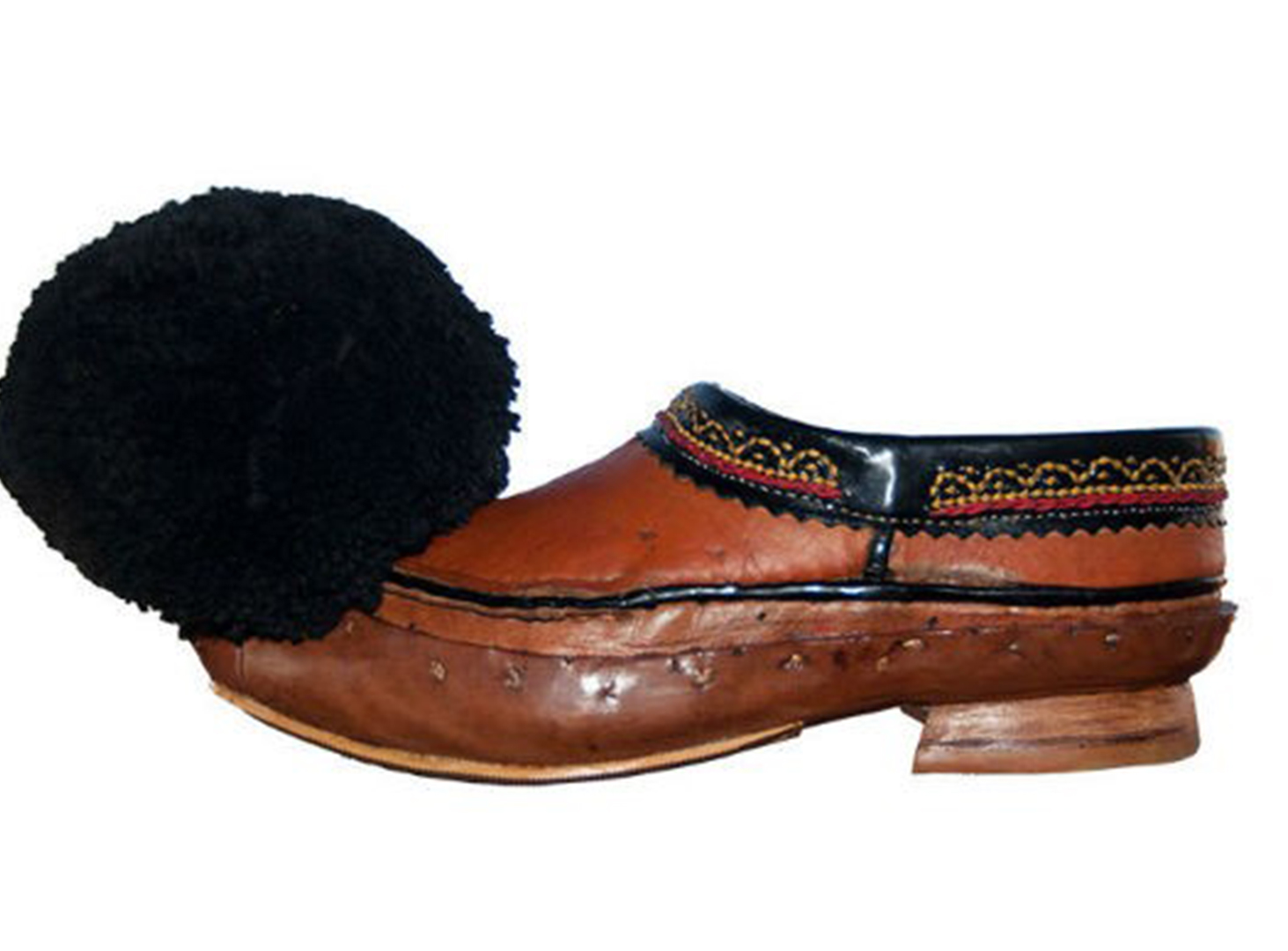