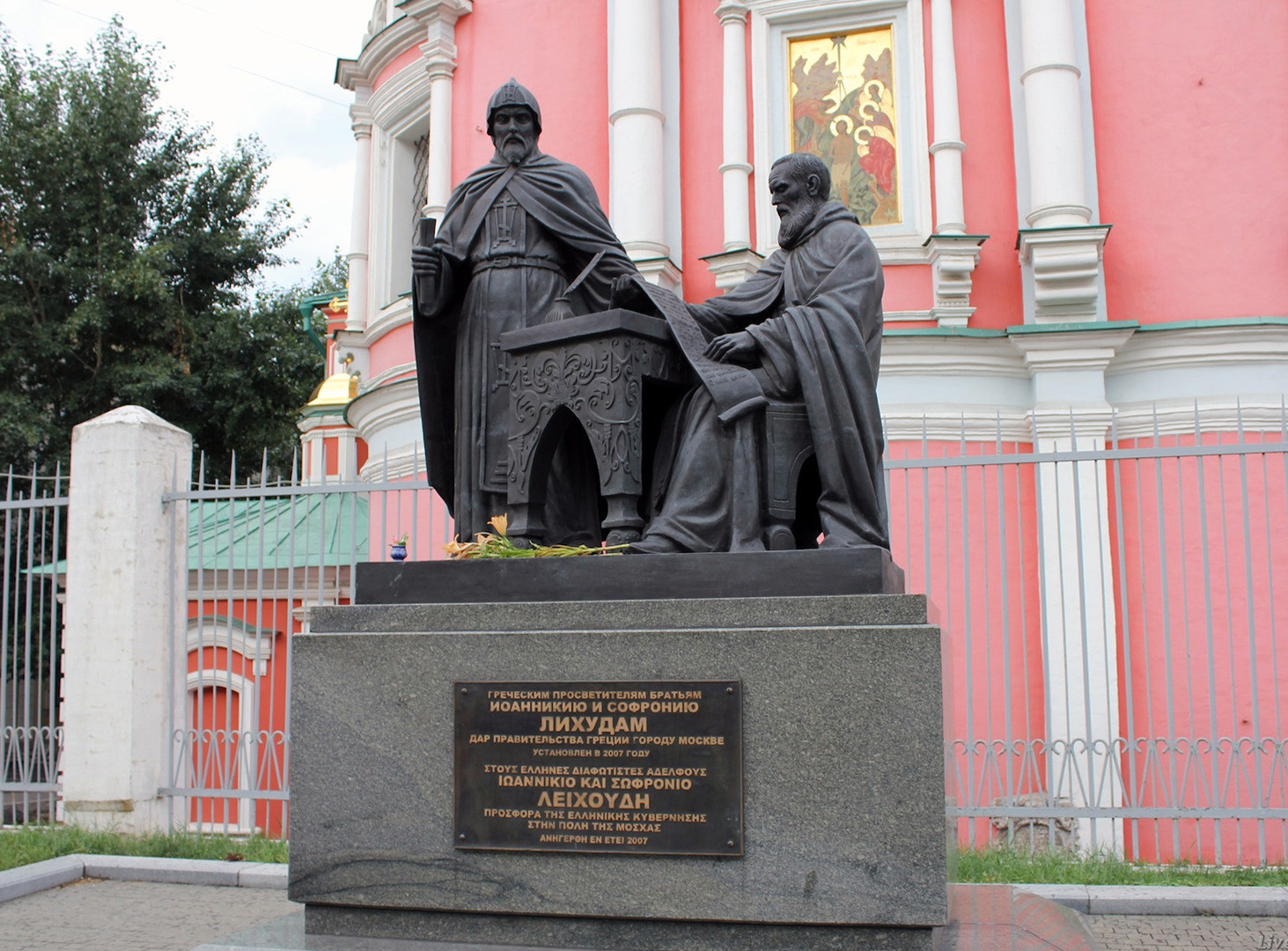 … Listen honorific words about the descendants of the Byzantine princely family who were going from Kefalonia to this country two years long, and how much they had to endure from envious and detractors while they worked tirelessly to create the first higher education institution in Russia – the Slavic-Greek-Latin Academy. The Leichoudes were educated in Greece, then at Venice and studied also in Padua University; so these encyclopedic educated people had something to pass on to Russian students from all walks of life, while teaching them Greek and Latin, rhetoric, physics, logic in the Hellenic-Greek school, which became the forerunner of the said Academy… Fate was not too gentle with these enlighteners, who were at the same time authors of textbooks and Bible translators into the Old Slavonic language, but the history put everything in its place, and a monument to honor these brothers was erected in Moscow in 2007 as a gift from the Greek government…

Few Muscovites, even among experts on back-door aspects of Moscow, know this story, which is now told to them during walking tour by Maxim Luchinin, the author of the project “Foreigners in the City”. The journey along the streets and side streets of Moscow begins at Varvarka, from the Old English Yard–the former Manor House of Ivan Bobrishchev, bestowed by Ivan the Terrible to English traders. Along Rybny Lane, the walking route pasts Gostiny Dvor, the walls and arcades of which remember merchants from all over the world who had come to Moscow about 300 years ago, including Greek ones and goes along Nikolskaya street, again to the Greeks–to the buildings left from the Zaikonospassky monastery: the Slavic-Greek-Latin Academy “moved” there. By the way, the most famous of its graduates was Mikhail Lomonosov. Here also studied the architect Bazhenov, the geographer Krasheninnikov and many other graduates who made up the glory of Russia.

Another Greek island …on the land

The Leichoudes were not the first or the only Greeks on the territory of Muscovy, says Maxim. Since Russia adopted the faith “in the image and likeness of the Byzantine”, the envoys of the empire came here to become the first spiritual mentors of the neophyte Russians. The apotheosis of Greek influence was the mid-17th century, when the territory of the St. Nicholas monastery was transferred to the Greek monastic community and allowed to lead church services in the Greek. Guests were exempt from the payment of “run-through” money and the monastery–from taxes. Over time, merchants with their goods came on the territory of the monastery, and in the neighboring alleys. Shops with Greek goods grew like mushrooms.

By the way, reminds Maxim, our two-headed eagle on the state emblem is also a gift from Greece. In the 15th century, when Constantinople fell, the great-niece of the last Byzantine emperor, Sophia Palaiologina, arrived in Muscovy and married the Russian tsar. Among her dowry was the royal emblem of the Palaiologos dynasty with the image of a two-headed bird. It was from there, that the eagle migrated to our coat of arms in 1497.

“At the time before Peter the first, the Greeks were, perhaps, the most revered foreigners in Russia …” – says Maxim. The enlightener Maxim the Greek, iconographer Theophanes the Greek, who painted frescos in the Assumption and Annunciation cathedrals of the Moscow Kremlin, belong to prominent Greeks in the history of Russian culture and literature …Other prominent foreigners in it were Italian, German, and English men–a little later in time. Mother Moscow hospitably opened arms to overseas guests, greeted they, treated they, but was also tough: if I wanted to, I would love, if I wanted to, would take life. May be Moscow was a step-mother for many such foreigners, but the history retained for us names of those for whom Russia became the second homeland: German citizen Karl Ferrein, whose pharmacy was located in a luxurious mansion on Nikolskaya, Englishman Michael Maddox, who built the Bolshoi Theater, Scots Muir and Mirrielees–the owners of the same-name trading house and a gothic mansion at the corner of Theater Square and Petrovka (present-day TsUM) where our clever Maxim ends his 90-minute excursion; and nobody wants to part with him: either those who registered for the excursion via the Internet, or his friends, or accidentally joined passersby. Let’s hear their opinions. 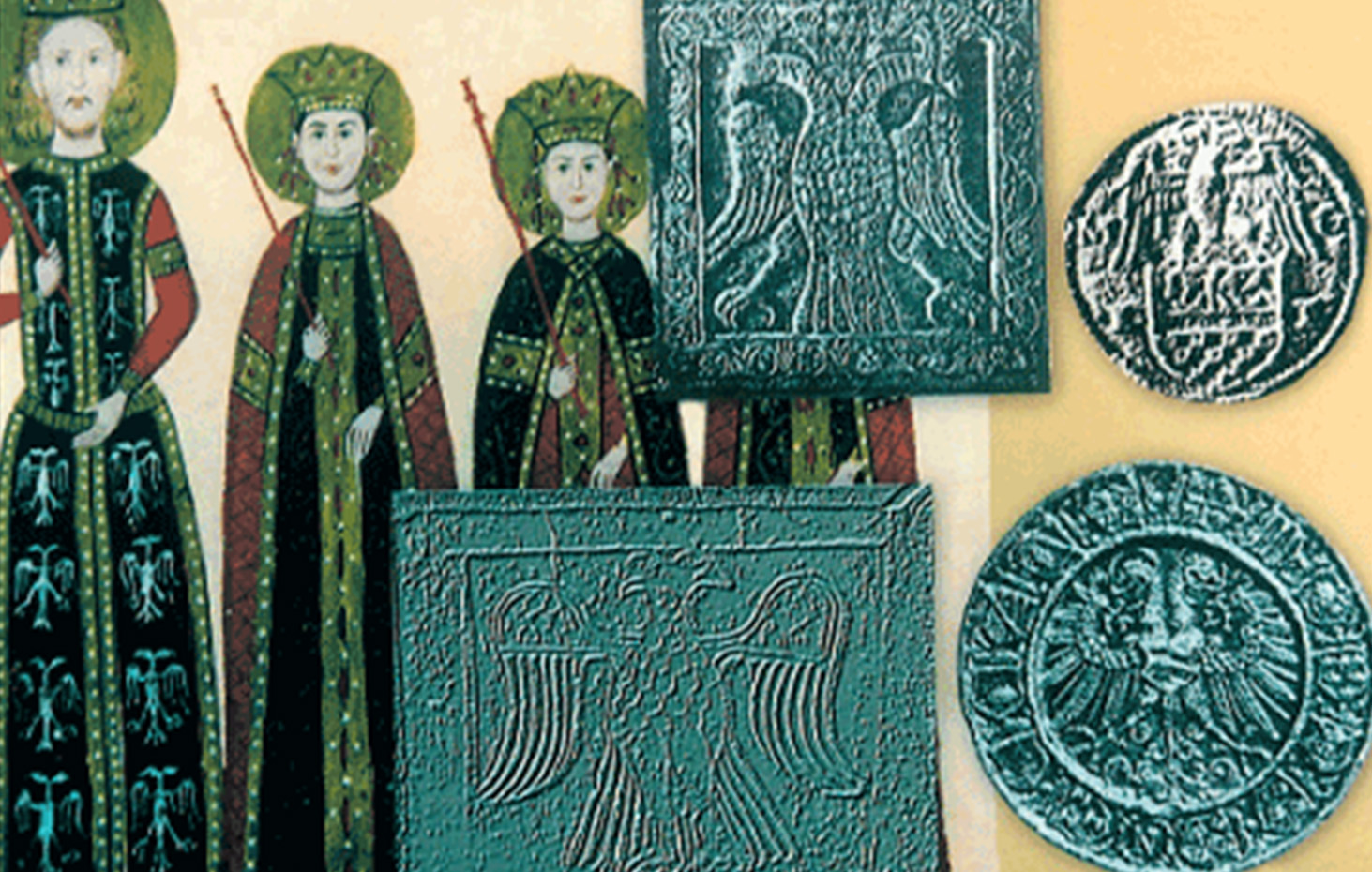 Tatyana Metaxa, First Deputy Director General of the Museum of the East:
– I was most impressed by the wall of Kitay-gorod, which Maxim showed us. In general, I am an expert on back-door aspects of Moscow, but I did not know about this corner of the city. Maxim is doing good job, opening all it for us.

Alexander, an employee of the Ministry of Foreign Affairs:

– I really enjoyed the tour, and I will talk to Maxim about a special tour for our employees and guests: that would be very useful and interesting.

A female participant in Greek Language Courses at the Greek Cultural Center:

– Easy, informative, just pleasant. I listened to Maxim with pleasure and it was a very pleasant walk for me. Moreover, today is such a sunny, joyful day. I will try to go on his other excursions.

– My daughter and I happened to be here by chance. Just walked in Zaryadye area and stopped, hearing a pleasant voice. We do not regret at all–perhaps it’s the most pleasant part of our stay in the capital.

You can learn about next offers of the project “Foreigners in the city” on the site foreigncitizen.timepad.ru