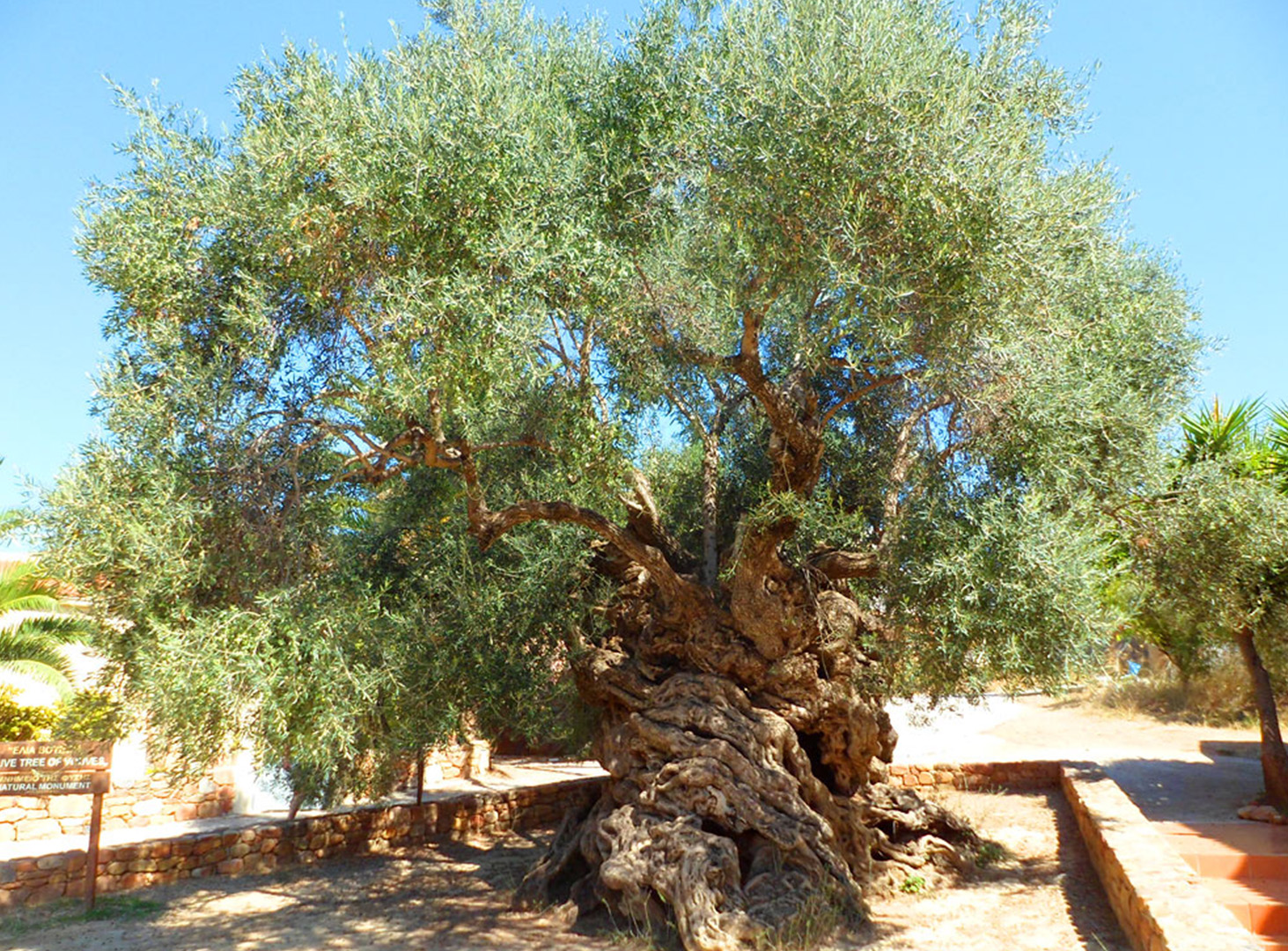 An olive tree is sacred for the Cretans, as for all Greeks. It seems that it always existed like land, sea, sky. The presence of olives on Crete back in the pre-Minoan era was confirmed by archaeologists. They are mentioned by Herodotus, Hippocrates and Homer. A provider, a doctor and a reward – the olive tree still exists as many centuries ago in all these appearances bestowing “gold of Greece” – olive oil – upon the Cretans (and not only upon them) …

The ancients had no doubts about the origin of the olive: it was presented to the Greeks by Athena, the goddess of wisdom and the patroness of peaceful labor. One day she asked Poseidon to give Attica to the people, convincing him that it was not good to keep under water the land suitable for farming. The stubborn Poseidon was angry and sent a storm to the coast of Attica to frighten Athena. But she only laughed and threw her spear, which stuck in the ground and turned into a wonderful olive tree. As a sign of reconciliation, Athena broke off an olive branch and gave it to Poseidon. It calmed the lord of the seas down, and he gave in to Athena’s request. Attica was given to people, and the olive branch has since served as a symbol of peace. The grateful Greeks accepted the protection of Athens and named their city in her honor rejecting the Poseidon’s gift, the source of salt water. By the way, this event is immortalized at the Parthenon’s front.

…A thin sprout rises slowly to the sun: olive trees begin to fully produce fruit only at the age of 20. But then they generously bear fruits for a long, long time, having survived ages, rulers and natural disasters. This tree is considered a symbol of life and longevity, and not in vain. It has been standing for centuries, even if a lightning has split its heart. If only a small part of its root remains in the ground after a fire, it will sprout anyway: the “unburned olive tree” will grow again. In preparation for the Olympics games in Athens, in 2004, some 600-year-old olive trees were extracted from the ground (at the site of the new equestrian center) and have been planted again after the construction was completed. They began to grow!

On Crete there are some olive trees―old like patriarchs. They are especially cherished (and proud of them!): in the folds of their trunks they have memory of events dating back to two and three thousand years. It is believed that the oldest olive tree is in the village of Ano Vouves, 16 miles west of Chania. The tree is hollow inside, its bark is twisted in a spiral, but it is still alive! If you put a hand to its mighty trunk, it seems you hear the roar of the centuries: the prayers of the Minoans in the shrines, the roar of the destructive tsunami or cries of pirates sticking to the rocky shore…

Scientists have calculated that this tree is about 3000 years old. Olive trees add 0.6 mm of stem thickness per year. The stem diameter of the Vouves’ tree is 4 yards, and it can be concluded that its sprout appeared on the ground in the pre-Minoan age; and the tree still bears fruit! Consequently, this tree was declared a protected natural monument. The Cretans even built a nearby Olive tree museum, where you can trace the history of olive production in Crete: how they are grown, how olives are stored and how they get olive oil… On the website of the Olive Tree Museum (http://www.olivemuseumvouves.com/default.aspx?lang=en) you can take a virtual tour and see 3D models of its exhibits.
You can read there: the purpose of the museum is “to preserve and promote all the characteristic aspects of the people’s lives in this area… connected to the olive tree. The olive tree is a part of our daily life, our nutrition, our celebrations, and, of course, our athletic events…”

Winners of sporting events, as before, are awarded wreathes made of wild-olive leaves from ancient olive trees. These «kotinos» awards are olive branches rolled up in the form of wreathes handed to the winners along with gold medals. The tradition of its presentation was revived at the XXVIII Summer Olympics games in Athens in 2004.