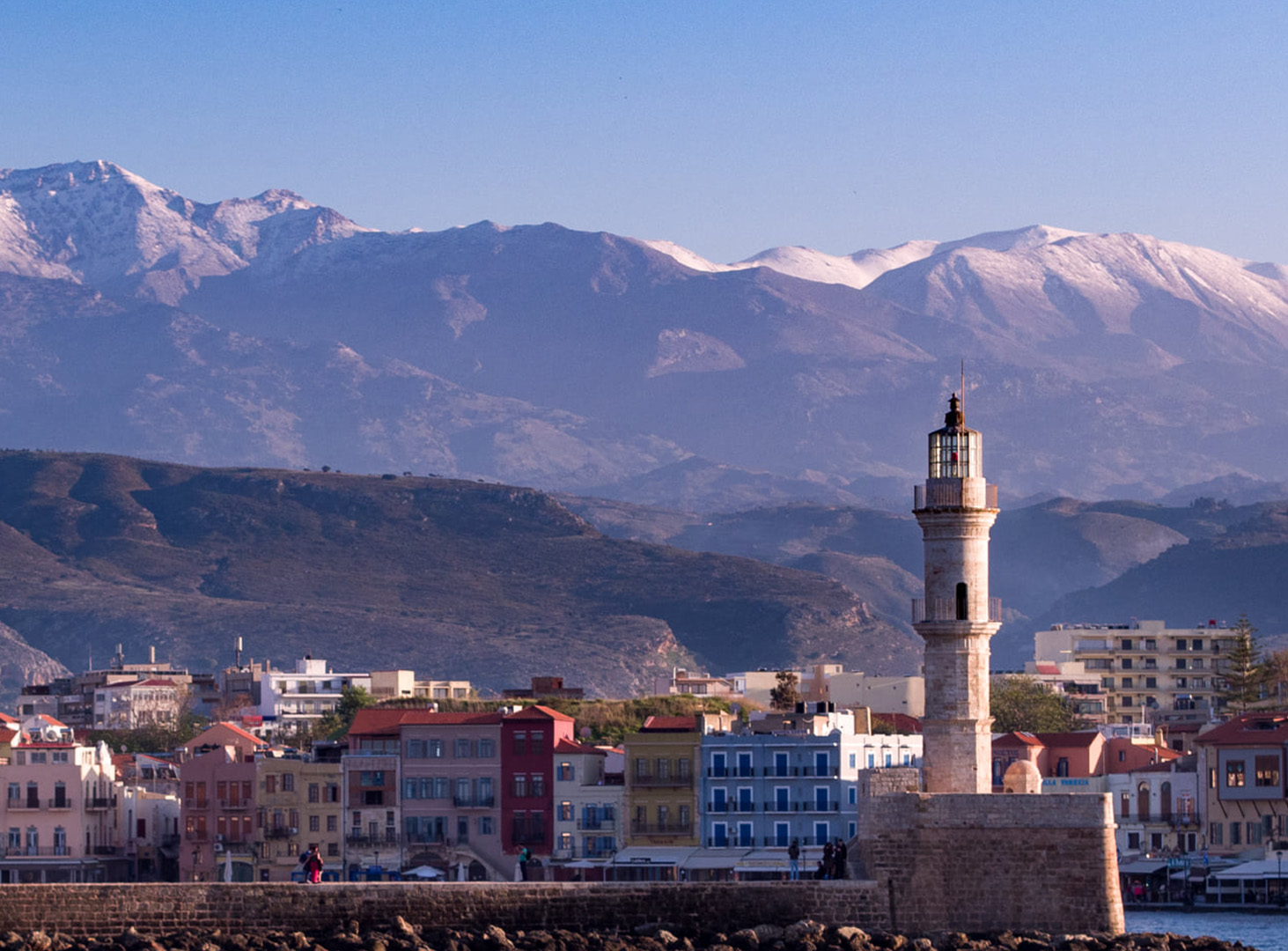 A community of ski mountaineers is driving an alternative model of tourism on Crete, shifting the focus from its sandy beaches to its snow-capped peaks.

Every year the island of Crete ranks as one of the top summer vacation spots in the world. Determined to show that Crete can also be a world-class destination for mountain tourism, and ski and snowboard tourism, a group of mountaineers organized the first ever winter ski mountaineering race on the island.

It’s a revolution in tourism; Cretans are ready to pick up their ski poles and their skis and show the world that there’s still an unspoiled Crete – far from the tour operators and the all-inclusive seaside resorts – in the heart of the island where shepherds still keep their flocks and make cheese, and where farmers grow fruit and vegetables to supply Greece and the rest of the world.

The fact that island is mainly a mountainous rocky terrain and a spontaneous wordplay with the “Pierra Menta”, gave event a name… And the name was “Pierra Creta” (Creta is the Latin name of Crete). During the early stages of thoughts about the event, organizators used this name and eventually became hard to give up on it. It was so fun telling the others about it, that this name became the official name event.

Pierra Creta was organized for first time in March 2014, and in 2015 as a team race with great success. After two successful consecutive editions, “Pierra Creta” is a bi-annual event. The third race was held in 2017, and in March 2019 the fourth “Pierra Creta” took place. Next event in March 2021! 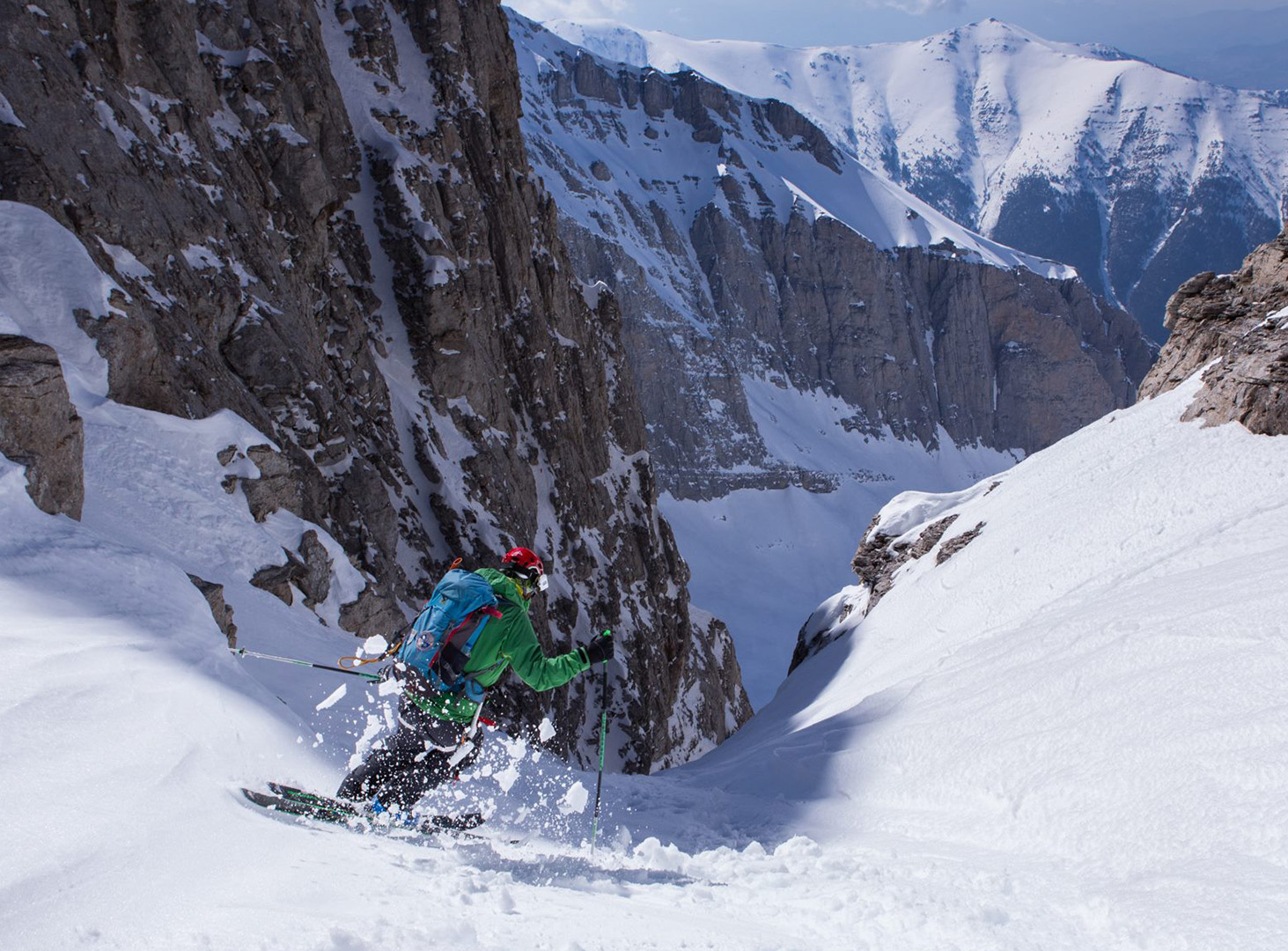 “It’s barely 30 years since the first Cretans, a small community of young people started to look at the island mountains from the point of view of mountaineering, and took up winter hiking, climbing and skiing,” Nikiforos Steiakakis, one of the event’s organizers, says.

Cut off geographically from the rest of Greece, we had little contact with the country’s mountaineering community. When, in 2012, we took part in a race on Mt Parnassos, we were struck by how seriously they took everything at this championship. So we thought we’d liven it up a bit, Cretan-style.

We decided to hijack the flow of the program and put on an alternative awards ceremony for those who came last. We asked the organizers to call them up by name. We took sheets of paper and wrote, ‘Even those who come last have soul’ and gave them out instead of participation certificates! And the cans of beer we had consumed (of which, admittedly, there were quite a few) we gave out instead of medals. And this was how, in that light-hearted mood, the idea was born to organize races on our own mountains, where we’d ski, too, but mostly, where we could show others how to have fun the Cretan way.

Beginnings are always hard. Mainlanders mocked: “How can there be snow in the Libyan Sea?” Local people sneered that, “some dudes in colorful leggings” would have little success approaching the unpolished residents of the villages of Psiloritis – Anogeia, Zoniana, Livadia – communities with a reputation of both lawlessness and gun ownership.

Nonetheless, the group didn’t lose heart. The snow was there, and they found allies, including Father Andreas from Livadia. He helped convince young and old alike that ski mountaineering is not only fun, but could also be used to promote sustainable tourism development. The locals, seeing that the mountains could be used for more than farming, were glad for a chance to change the area’s reputation as a place “outside the law.”

The first year, seventy-three people turned up for the event. The well-known French mountaineer Christophe Moulin, invited to attend, couldn’t contain his enthusiasm. He predicted that, within five years, this would be an event that all of Europe would want to take part in, and he was right. 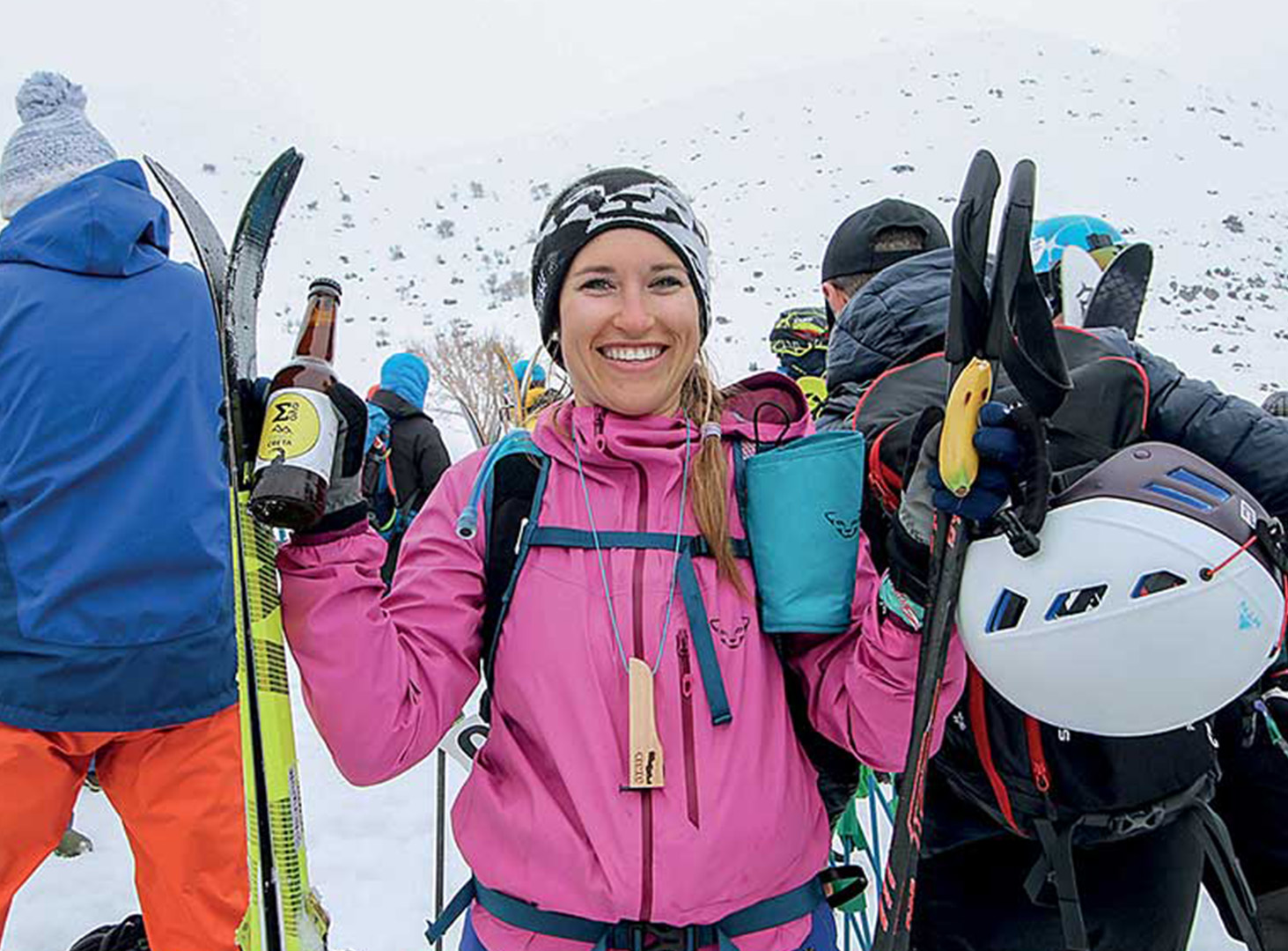 Last 2019 year, the fourth time the event was held, 200 people, including 58 foreigners from a total of 11 different countries, took part. The race consisted of two routes: a ski mountaineering race for top athletes (1,800m elevation difference), and a shorter route for those taking part in a more amateur capacity (1,000m elevation difference).

As always, the fun element was at the fore. In place of energy bars, there were delicious bananas from Arvi (village in Heraklion Region), and rakomelo (a mix of raki with honey) was substituted for energy drinks. The prize was a beer created for the event in partnership with a local microbrewery, which you could only drink if you worked out how your medal could be used as a bottle opener.

“Psiloritis is an iconic Mediterranean mountain,” says Steiakakis, “and, what’s more, it’s a ski resort-free zone. You come here to enjoy a special quality of snow, and to gaze at the sea on the way down. The weather’s mild; the sun’s always shining, even in winter. The aprés ski is just as important: you’ll get to try authentic local cuisine, to drink raki, and to explore the culture of the group here.”

For the organizers of Pierra Creta, their progress is encouraging. “For three years, we’ve organized free skiing lessons for children; this year, we even joined the children’s program of the International Ski Federation, which is a global first for a place that doesn’t have a ski resort. We’re communicating the idea that the absence of a ski resort in Crete is an advantage. Ski mountaineering is growing in popularity everywhere; snow lovers no longer want to feel confined to ski resorts. And we have what they want. Paradise, but on a human scale.”

* The Pierra Menta – an annual competition of ski mountaineering at Arêches-Beaufort in the region of Beaufort, Savoie south-eastern France since 1986. The Pierra Menta is one of the three best known races of the Alps. 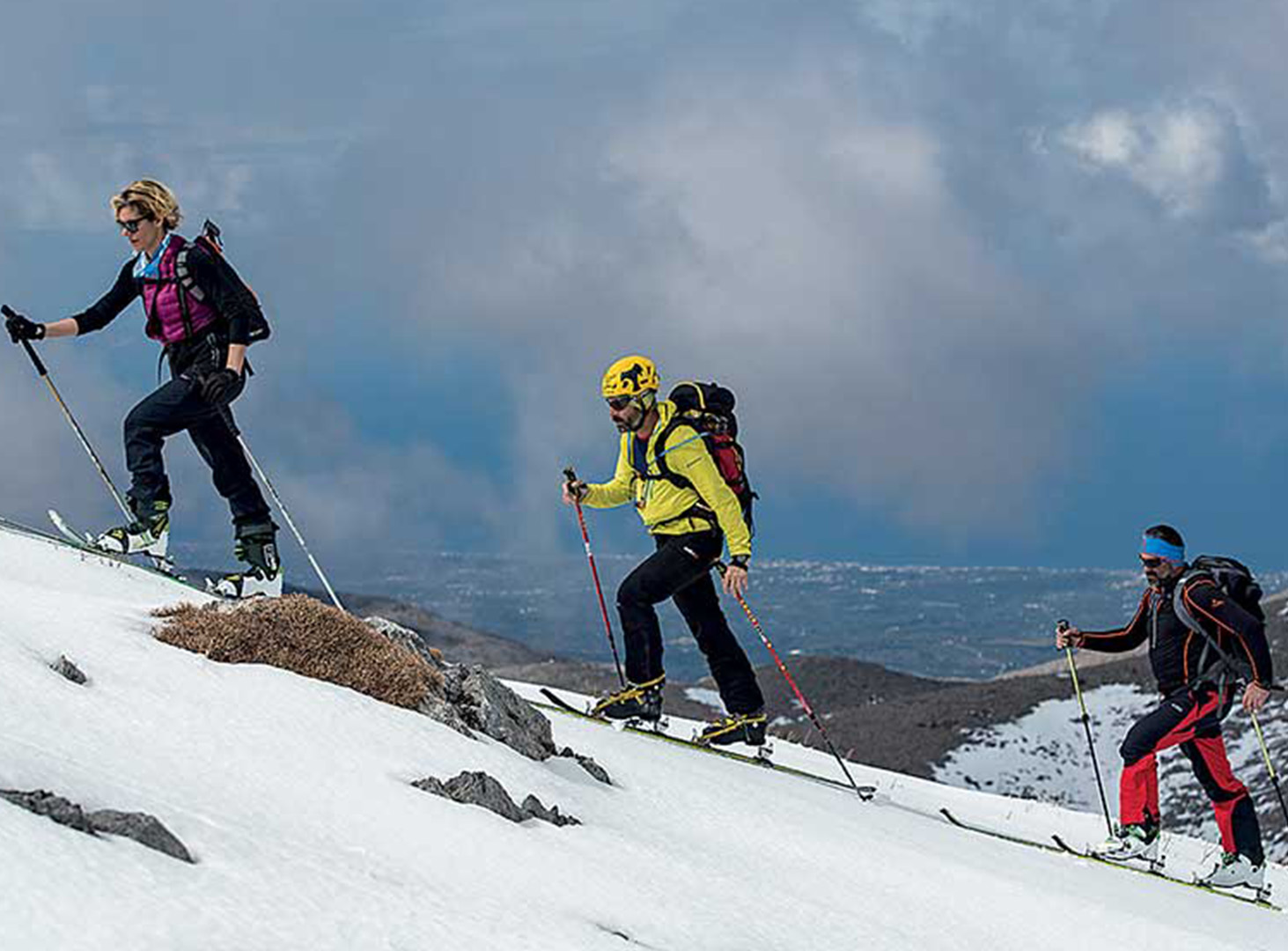 “Crete Arising” is a documentary about ski mountaineering in Crete and the Pierra Creta Race held on the island’s tallest mountain Psiloritis.

Film will be available at www.frozenambrosia.com