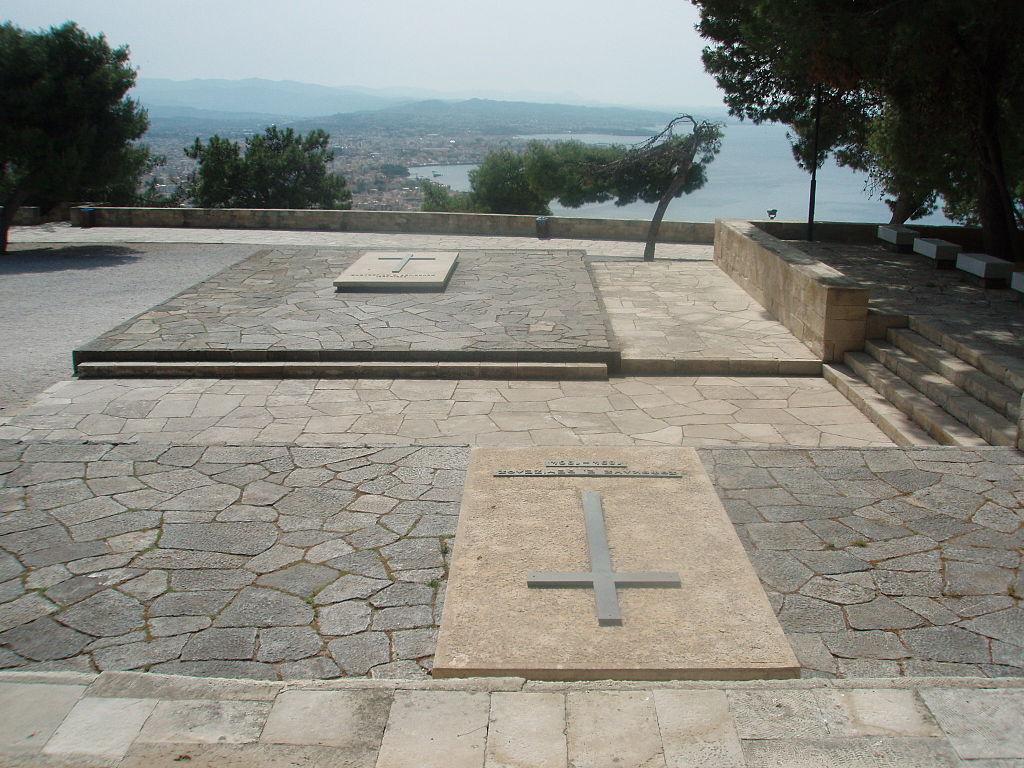 In connection with the recent covid restrictions in freedom-loving Greece, I recalled a complicated and sad story of Cretan Statue of Freedom – “Eleftheria”.

From 1937 to 1970, a statue of the goddess Athena, as a symbol of freedom of Greece and the island of Crete, rose on the hill of the Prophet Elijah in a small park (35.52492, 24.05614) at Cap Akrotiri near the tomb of Eleftherios Venizelos. It should be said that Venizelos was one of the most significant politicians in Greece who made a great contribution to the independence of Crete from the Turks. Born 1864 in the city of Chania, he served as Prime Minister of Greece several times from 1910 to 1933.

It was in memory of Eleftherios Venizelos that the statue of Eleftheria was erected in 1937. It towered 20 meters above Chania, being considered the guardian angel of the city, and was the first to welcome ships that entered the port.

Standing on a pedestal of red marble, Athena held in one hand a shield and in the other a spear (in one of the pictures it was a labrys ax), recalling the main value of the Cretans – the freedom. The statue created by T.Tomopoulos (who died 1937) was erected to commemorate also the 100th anniversary of the liberation of Greece from the Turkish yoke.

During the landscaping work on the hill, some of contractors asked the municipality to replace the sculpture but were flatly refused. However, the statue of Athena, which survived all the bombing of World War II, could not withstand a lightning strike in 1967. The terrible January weather then lasted three days and brought many troubles to the inhabitants. Another blow was a message in a local newspaper with a snapshot of the destroyed Statue of Freedom without head and arm. “Snapshot of dead hope” was called this photo in the Greek press. Local residents perceived the news of the “decapitated Freedom” with bitterness, considering the event as a symbolic one.

Some unsuccessful attempts were made to restore Eleftheria, and the remains of the statue can still be seen in a corner of the park.

Next to the tombstone of Eleftherios Venizelos is the tombstone of his second son, Sophocles who served three times as Prime Minister of Greece from 1943 to 1952 and has achieved admirable results of political activities in the interests of the country. The tombstones of famous Greek prime ministers are simple stone slabs with crosses and epitaphs.

The hill of the prophet Elijah was named because of a church of the 16th century standing there. In 1897, it served as a meeting place for revolutionary leaders, among whom was the elder Venizelos. This small church still serves as a real decoration of the hill today. From here you can enjoy a beautiful view of Chania and the coast.

On the hill, you can also see a bronze monument to Spyros Kayales, a fighter for liberty of choice. In 1897, on the eve of the Greco-Turkish war, the Cretan uprising for reunification with Greece took place. The rebels, entrenched on the Akrotiri peninsula, were fired from two sides at once: on the one hand, the Turks, on the other, the Russian, British and German fleets, who did not like the waving Greek flag, but that is another story …

When the flagpole on the hill of the prophet Elijah fell, caused by shelling, Spyros Kayales raised the flag above his head demonstrating incredible courage and resilience. He not only survived those shelling but also participated thereafter in the Balkan Wars and died in 1929.

There are usually few tourists on the hill. You can safely explore the park, pay tribute to the famous Geek from Crete and, of course, enjoy the views of Chania and the sea. It seems that it is these open spaces – the sky and the sea – that cultivate in Greeks a sense of inner freedom which cannot be destroyed by any external circumstances.