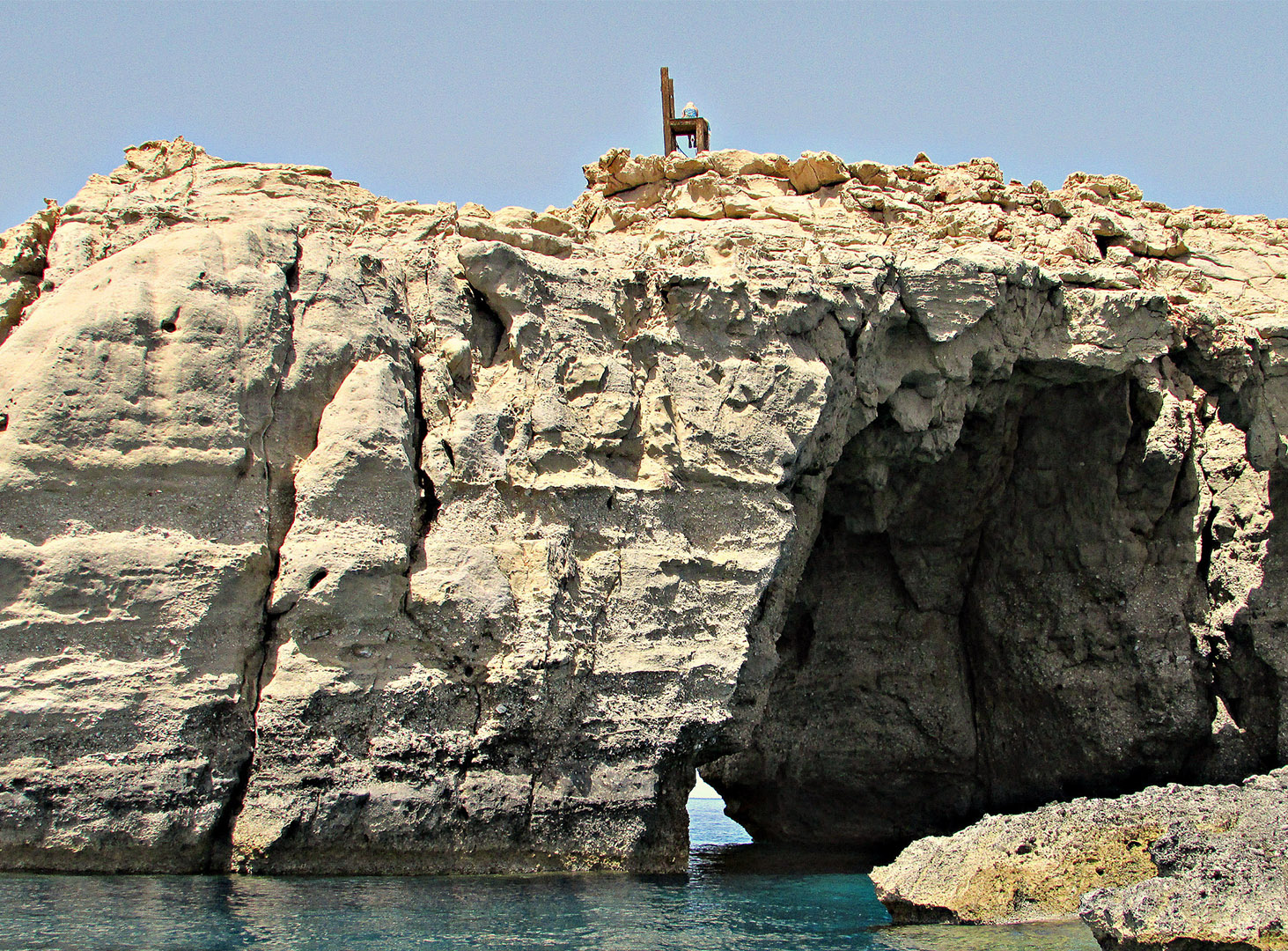 Imagine: There are seashore, a dark sky with August stars above your head; at your feet are waves running onto the sand: splash, splash… Behind, there are a tent and a smoldering fire. Nobody is around but cicadas with their serenades. You are alone with yourself and eternity… Or rather, you are on a small island, the southernmost point of Crete (and Europe) – it’s Gavdos. 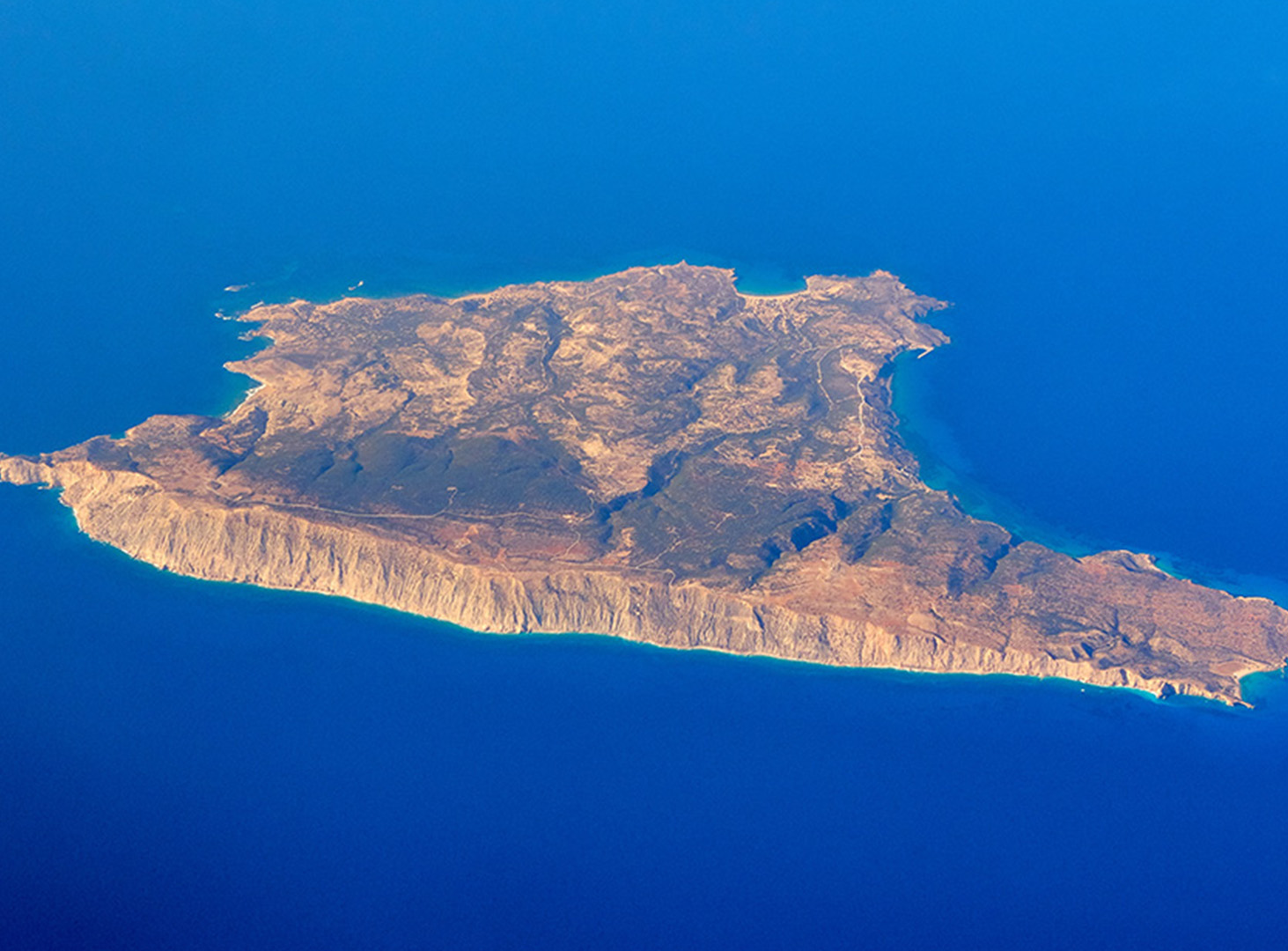 This island with an area of ​​only 27 square kilometers is a place of pilgrimage for philosophers and adventurers of all stripes. There are only 50 residents here and a few authorities, as they say, but the atmosphere of freedom and friendliness is amazing and infinitely. Come, put up a tent or occupy an abandoned house: no one will say a word to you, if you don’t bother anyone, of course. At the same time, be prepared for the fact that on Gavdos there are no banks and ATMs, gas stations and repair shops, pharmacies and the Internet… There are rocks, paths, sea, sunsets and… amazing people: not only indigenous ones but also pilgrims from all over the world. Moreover, the “Russians” (as they are called six people) settled here about 19 years ago.

Why? The versions are different. It is only known for certain that they built houses, acquired sources of their own electricity and fresh water, learned the Greek language and became objects of respect for the islanders. By the way, it was “Russians” who installed on the southernmost point of the island – Cape Tripiti – a wooden throne chair. Sit on it, look around and make a wish – it will come true: both locals and tourists are sure that the island is a magical one! Here Odysseus was languishing (or blissful) in captivity at Calypso, and the famous pirate Barbarossa used the island as a refuge, even the apostle Paul saved his life on it during a shipwreck on the way from Jerusalem to Rome.

Only 20 years ago, there were no asphalt roads, electricity in coastal taverns was generated by generators brought from the mainland, and communication with Crete supported a fragile little ship. Now the situation is better, but be prepared for the fact that this trip is an adventure, and not a rest calculated to the smallest detail. A ferry from Crete goes to Gavdos in the summer 4 times a week from Sfakia and Paleochora, but only if the wind speed not exceeds 5 on the Beaufort scale, so there is always a chance be stuck out there like Odyssey. If something happens, it will be difficult to cope with the problem alone, even if you have money: human relationships and mutual assistance are a hundred times more important here.

Have you not changed your mind to be alone with yourself and eternity? 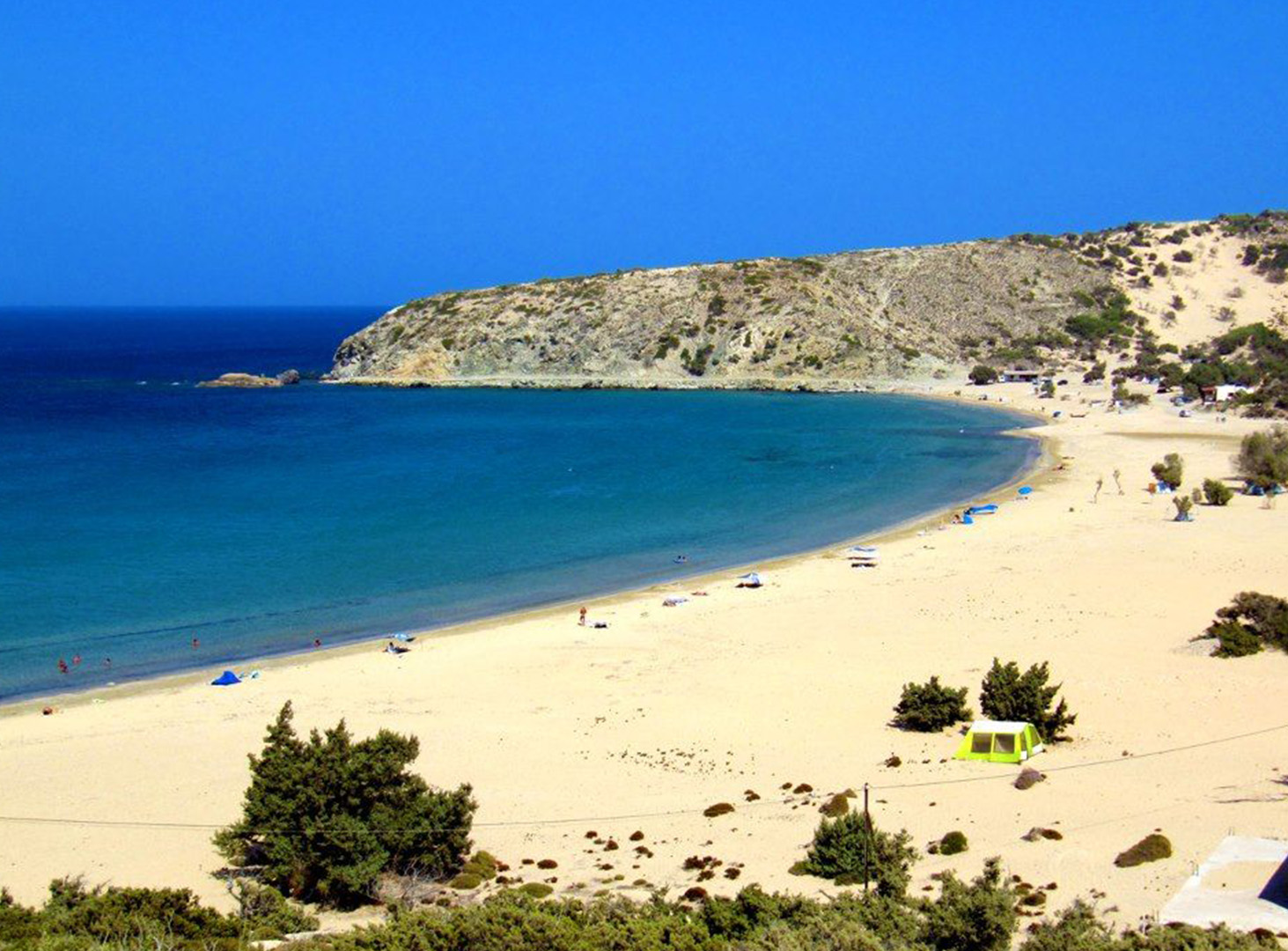 There are taverns, but take a fishing rod with you!

Do not worry; there is a civilization on the island. The basic tourism infrastructure is concentrated in the “capital” of Gavdos, in Kastri, where there are shops and taverns, as well as a couple of family inns. There are no hotels, but by the time the ferry arrives, taxi drivers gather at the pier, ready not only to give a lift to newcomers, but also to offer a room or a house for a reasonable price. The ferry arrives at the port of Karave, where there are also several shops and a year-round cafe run by Evangelina Tsigonakis. There are several more villages on the island: Xenaki, Vatsiana, Abelo are connected by a narrow asphalt road. In addition, thanks to EU subsidies, hiking trails linking different parts of Gavdos to each other are laid on the island and cleared of stones, so roaming through them is quite easy among the centuries-old cedars and pines. But do not try to turn: it is not easy to get through the thorny bushes, and it is easy mistake to make. Major routes lead to the beaches. The most famous and habitable is Sarakiniko, in the north of the island. There is white sand and amazing color of shallow water, so it warms up already in early spring. You will find even a mini market open from morning until noon, as well as several taverns. True, they say that the local cuisine is poorer than the Cretan one, so you can follow the example of most tourists: bring food with you, or even go fishing – why then catering? Four kilometers from here, in the northwest, is the picturesque Agios Yiannis (St. Janis Beach) with a unique cedar massif on the coast, sand dunes and golden sand. It was chosen by fans of the rest in tent. Neither electricity, nor the Internet, to get fresh water, one have to walk for 2,5 miles: in the sweat of his face, so to speak, to get bread… sorry, his water. In the summertime, almost every stunted cedar here becomes a “roof” of someone’s tent or even just of a wigwam made of branches and cardboard. Literally behind the rock begins the beach of Lavrakis. It is for the real adventure tourist, so if you are searching for solitude, it is a right place for you; and be prepared one morning to see Aphrodite coming out of the water in her birthday suit: there are a lot of nudists there. A dangerous path leads to Lavrakis. It requires the utmost attention, since it often crumbles. But the path to Potamos beach, on the western part of the island, is even more difficult: you will have to go down a path cut into the rock; about 200 yards, but it will not be easy, if accompanied by the heat and wind. Potamos with its reddish sand is deserted as on the first day of creation. True, according to rumors, sometimes yachts come here, and noisy companies remain until the evening to watch the sunset, which colors the local rocks in incredible shades. You can enjoy the sunset from the old lighthouse, one of the “official” sights of the island; and its caretaker will probably offer you a cup of coffee (or a shot glass of raki)…

Finally, the southernmost beach of the island (as well as of Greece and Europe) is Tripiti, the one with the throne chair on the top. An equipped path leads there. A propos, on the coast of Gavdos, there are no sun loungers, umbrellas and other things familiar to the beaches… 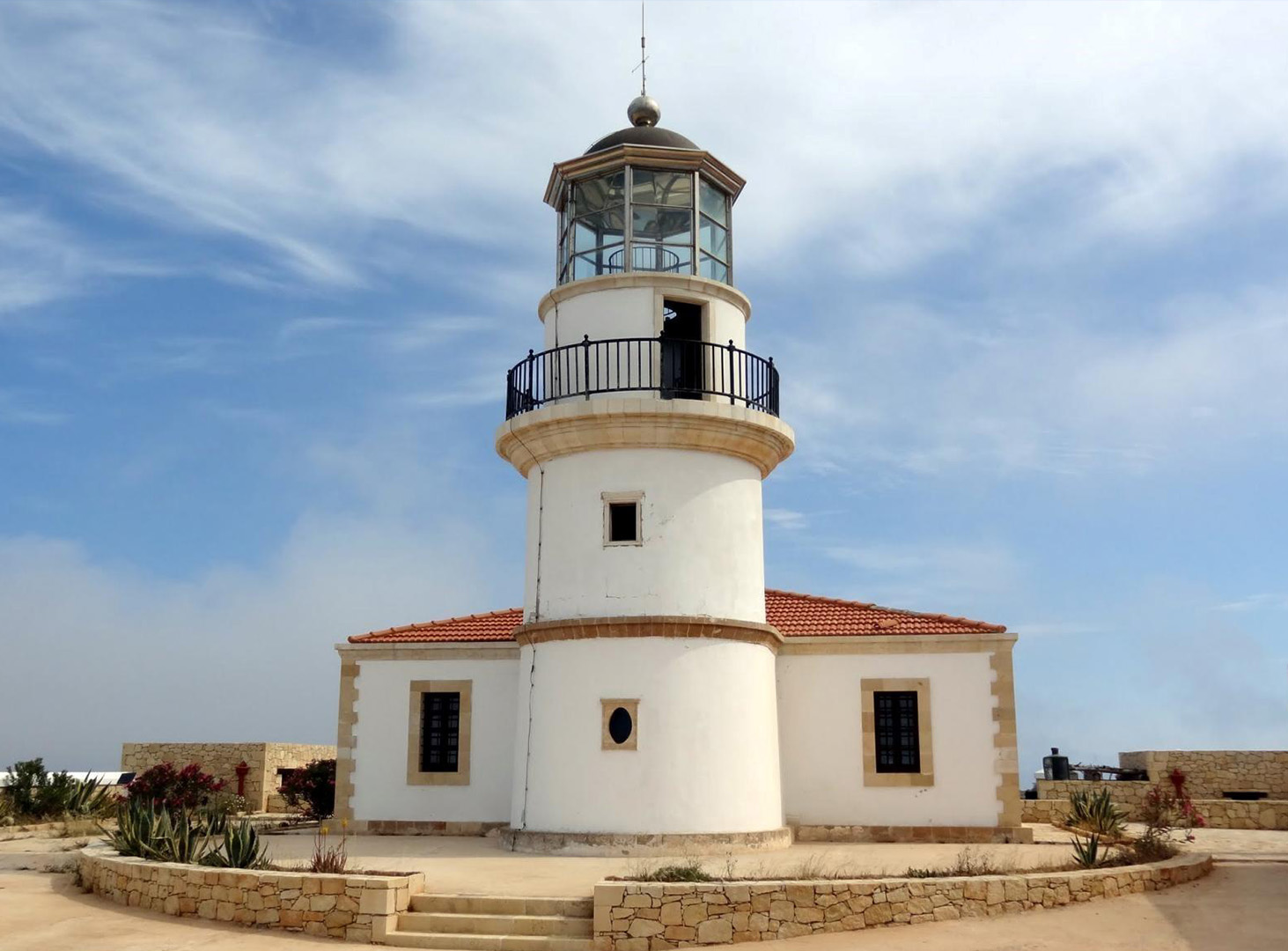 The answer to this question for everyone dreaming of Gavdos vacation is his own. Maybe one wants to be in the center of world where time has stopped. Perhaps he is curious to realize in unusual circumstances a different version of himself, hitherto unknown. Maybe he is attracted by kaleidoscope of people―non-standard, different ones but somewhat coinciding, because they all are on Gavdos… In any case, if you are going to the island, trust the will of the gods: they know better how much trials, delight and wisdom will be measured for the traveler to make his trip to the island of Calypso unforgettable. By the way, experienced travelers to Gavdos advise: “If you want see Mediterranean as the heroes of ancient Greek myths saw it―wild, deserted and mysterious,―it is better to go to Gavdos not in the midst of the tourist season, but in spring or autumn”.