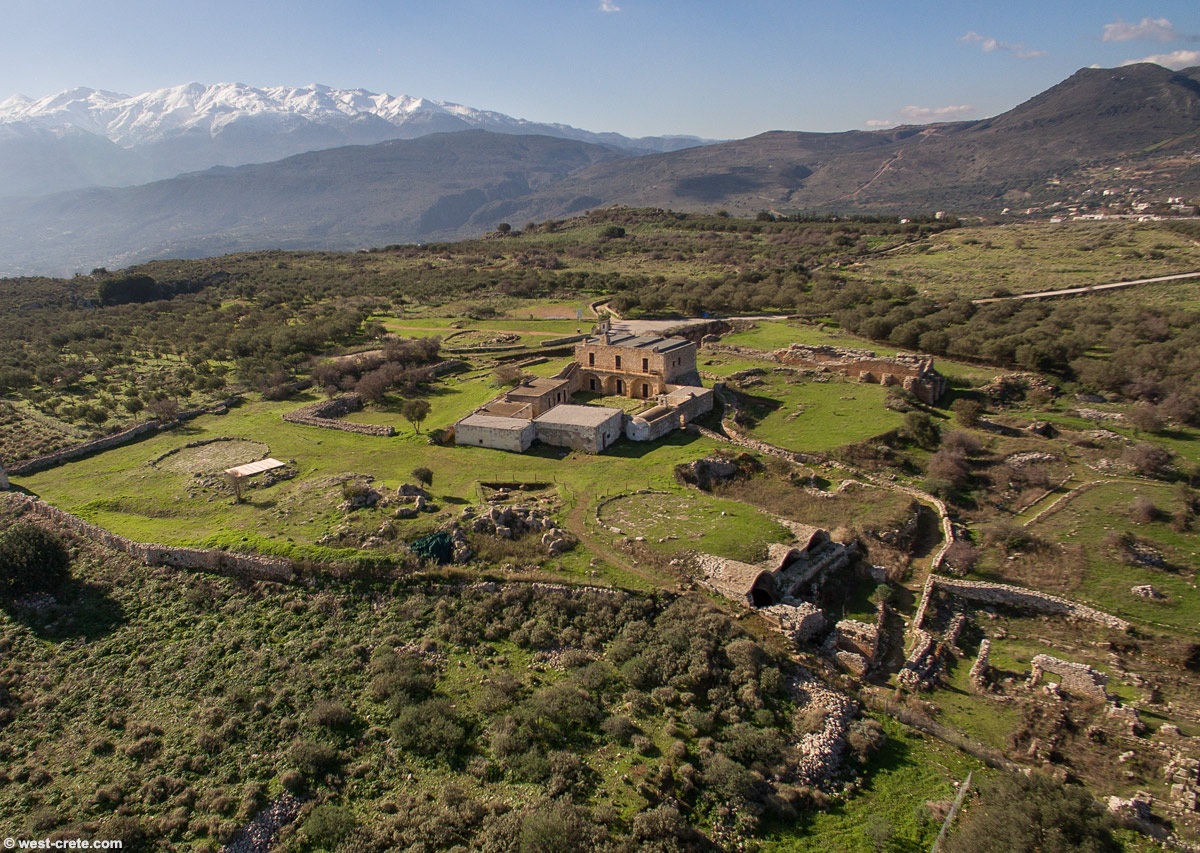 One of the most interesting archaeological sites in the west of Crete is the ancient city of Aptera. Archaeologists are still conducting excavations on its site located one kilometer from the southern shore of Souda Bay and about 13 kilometers east of Chania.

Aptera has been inhabited since Minoan times. An important settlement founded in the early Minoan period was discovered to the south of the Aptera site near the modern village of Stylos. This settlement is known as a-pa-ta-wa (reconstructed Aptarwa = Aptara) and is mentioned in inscriptions in the Linear B on the tablets of the 14th-13th centuries BC which were found at Knossos. Later, at a distance of about 1.5 km from there, the ancient city of Aptera was founded and apparently named after that decayed ancient Minoan settlement. 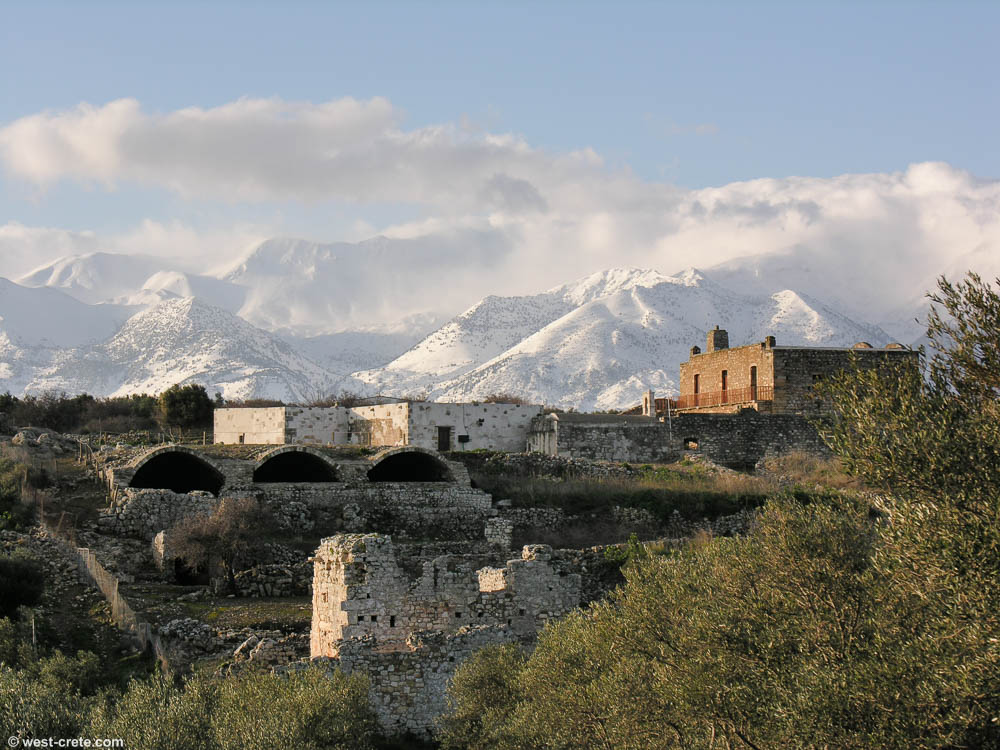 In Greek mythology, Aptera was the site of a legendary music and singing competition between sirens and muses. The sirens were defeated by the muses and plucked mercilessly (in memory of this victory, muses were often depicted with feathers on their heads). The unfortunate plucked sirens threw themselves into the water in shame and grief: the city’s name literally means “without wings”.

The city was located near two seaports on both sides of the Souda Bay: one was Minoa (today it is Marathi), on the north side, and another—Kasteli (near the tourist village of Kalyves). The location above the Souda Bay was strategically justified. From Aptera could be seen the movement of ships: from the top of the hill, at an altitude of about 150 meters above sea level, there was an excellent view over the Souda Bay and the Akrotiri Peninsula. It was an important trading center in western Crete and a major city on the island. 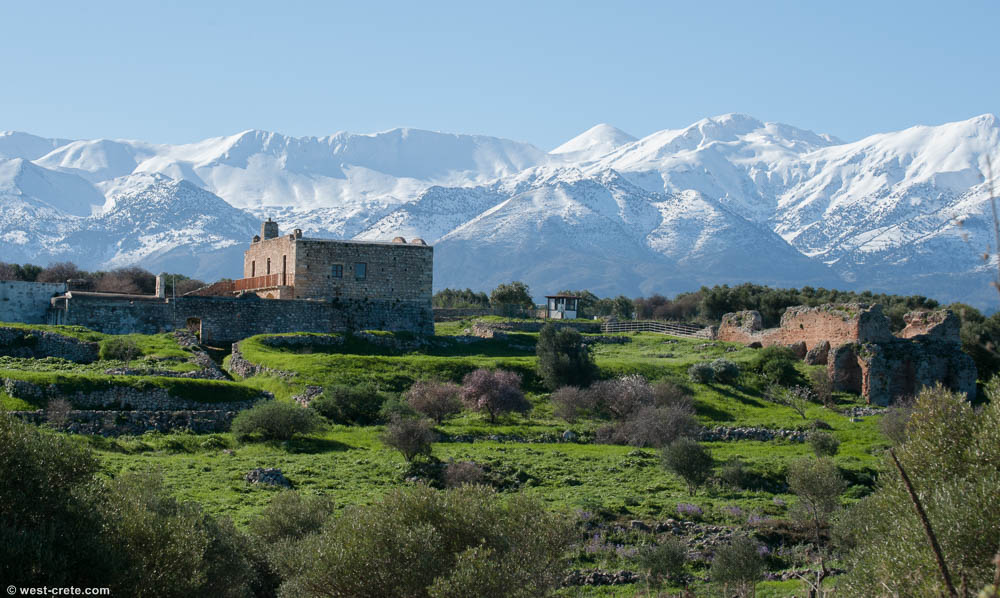 For most of the Greek Archaic period (VIII-VI centuries BC), Aptera was the vassal of Kydonia (present-day Chania). The city-state flourished in the Hellenic era during the 4th-3rd centuries BC. The population of the polis reached 20,000 people; and the Aptera army was famous throughout the Mediterranean: its archers were exceptional.

Archaeologists have found 76 types of coins in Aptera, and after their discoveries the ruins on the Paleokastro hill were identified as the ancient Aptera. Some of the coins have the obverse with an image of a woman’s head and the inscription ΑΠΤΑ ΡΑΙΩΝ or ΑΠΤΕ ΡΑΙΩΝ, which means “inhabitants of Aptera”. On their reverse side is depicted a warrior. 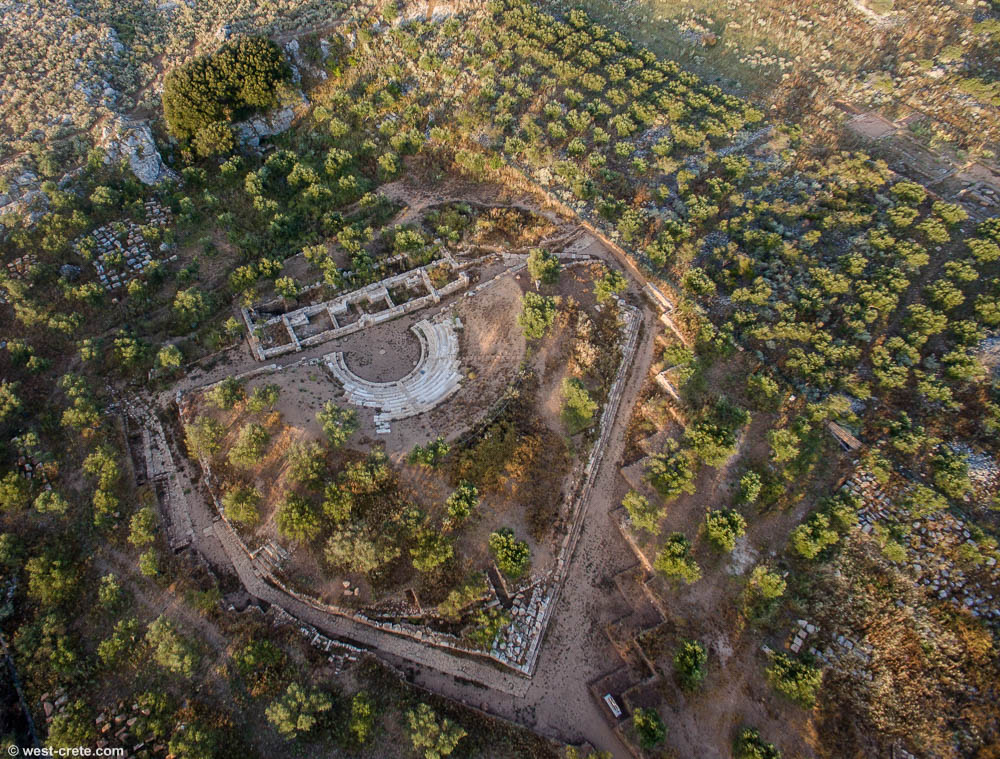 Aptera, like many other towns in Crete, was badly destroyed during the famous 365 AD earthquake. (For more information see https://thenewgreece.com/history-and-myths/the-most-destructive-earthquake-disappearance-of-phalasarna/) Subsequently, it was sparsely populated and finally ceased to exist after an attack of the Arabs in 823.

By the 12th century, the monastery of St. John the Theologian was built on this site and continued to operate until 1964. Several buildings remained inside the square fence of the monastery, including a chapel and a two-story block of monks’ cells. There is a great Aptera representation in the monastery.

The city was surrounded by massive fortress walls with a total length of 4 km. They were built in the 3rd century BC. Now you can see a preserved section of the wall with a part of a watchtower adjacent to it. 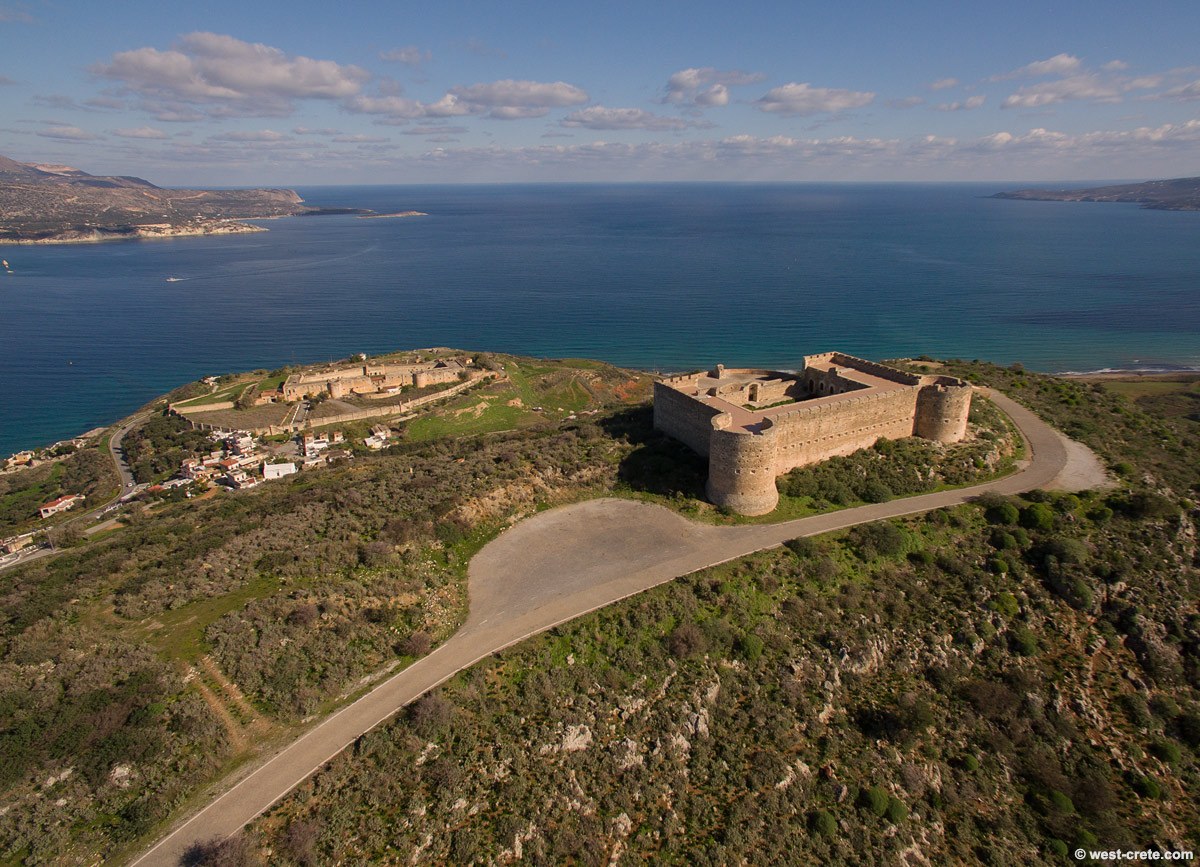 The area is notable for a two-part Hellenistic sanctuary dating from the 5th century BC, a large Roman cistern with three vaulted ceilings, Roman baths and parts of several Doric temples. An ancient amphitheater and a Roman villa with a colonnaded courtyard were also discovered at this site. It should be noted that most of the site has not yet been excavated.

What is a real gem of this place? The Turkish Izzeddin Fortress is it, located closer to the sea and below Aptera—at the northeastern end of it. 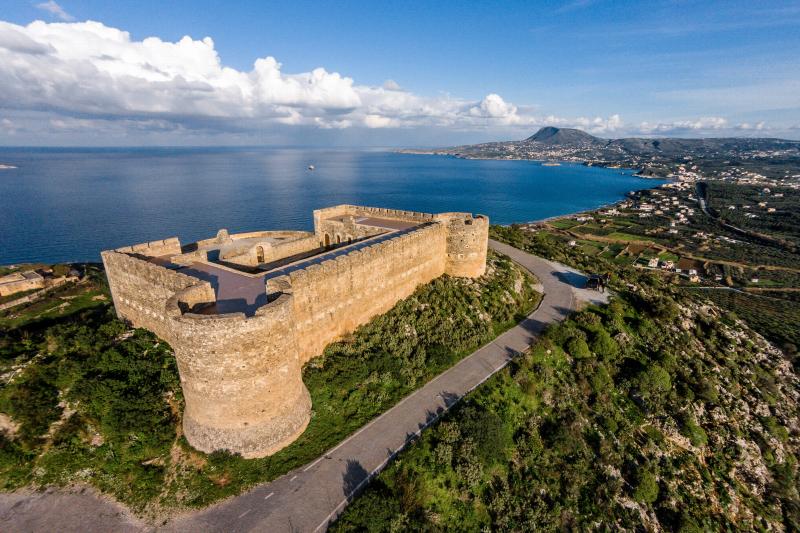 The fortress is perfectly preserved: it was restored in the early 2000s. There was supposed to accommodate a museum for fortification of Crete, but, probably, something did not work out … This Turkish fortress is one of the most powerful in Crete. Together with the fortresses of Souda, Izzeddin was supposed to control the Gulf of Souda with the surrounding area. Stones from the ruins of ancient Aptera were used during the construction of the fortress. The cliffs around it are ideal viewpoints overlooking the Souda Bay. Today the fortress has no established name: usually it is called “Kules” (a corruption from Turkish where “kule” is a “tower”) or “Paleokastro” (“old fortress” in Greek)—after the name of the hill. The fortress was built in 1872 on the site of an old small fort and named after the son of the Turkish sultan. This is a coast guard outpost. The harbor of Souda was one of the most protected in the Mediterranean. 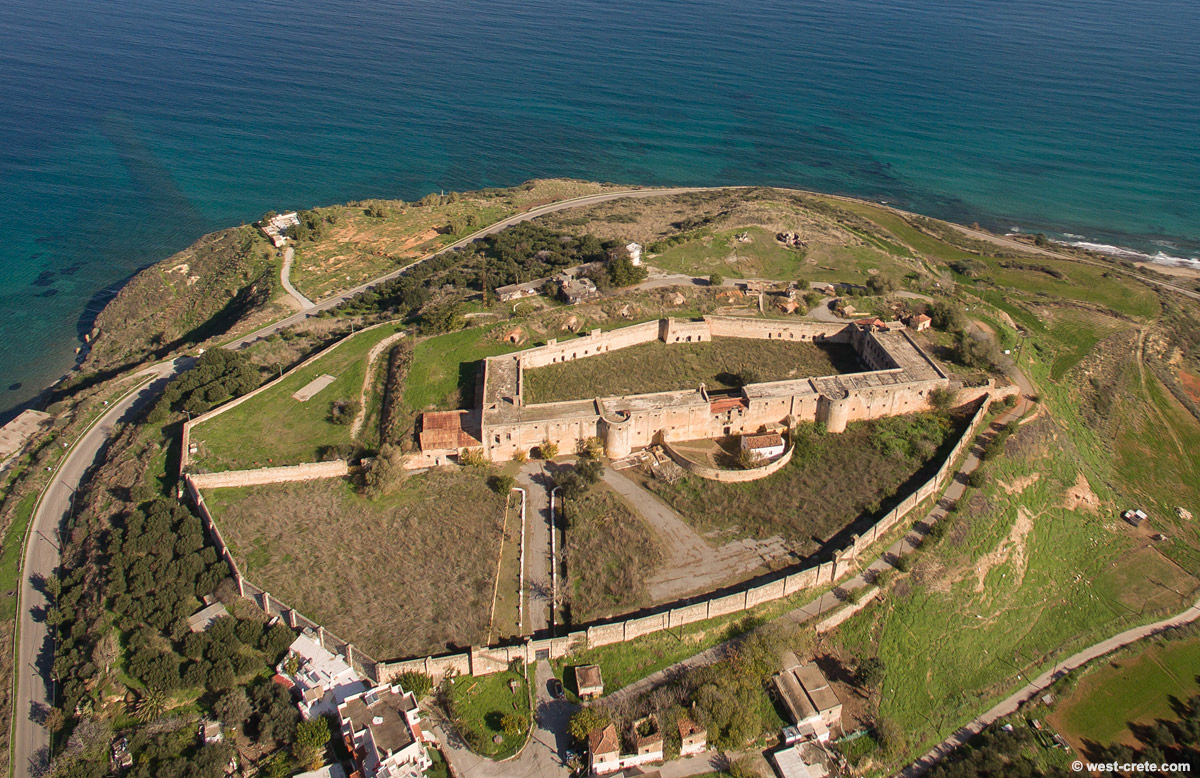 Since 1898 the fortress has been used as a prison. There were times when up to 400 people were “stuffed” into this small prison. On its territory, until 1972, death sentences were carried out. In 1975, the prison was closed and the fortress was transferred to the army. For some time it was a part of a structure belonged to a naval base and used as an artillery range. In the 80s, the fortress has become an architectural monument. The residents of Chania wish to turn this eerie place into a museum of modern history, while others believe that such a nightmarish “monument” should be demolished. Occasionally, concerts are held in its courtyard but the most of the time the fortress is closed to the public.

You can get to these attractions as part of an excursion or on your own by car. Professionals, English-speaking residents of the island will help you to decide what to see, to plan the best route and to choose a car for traveling. Contact The New Crete: www.thenewrentcar.com/thenewrent/ru/