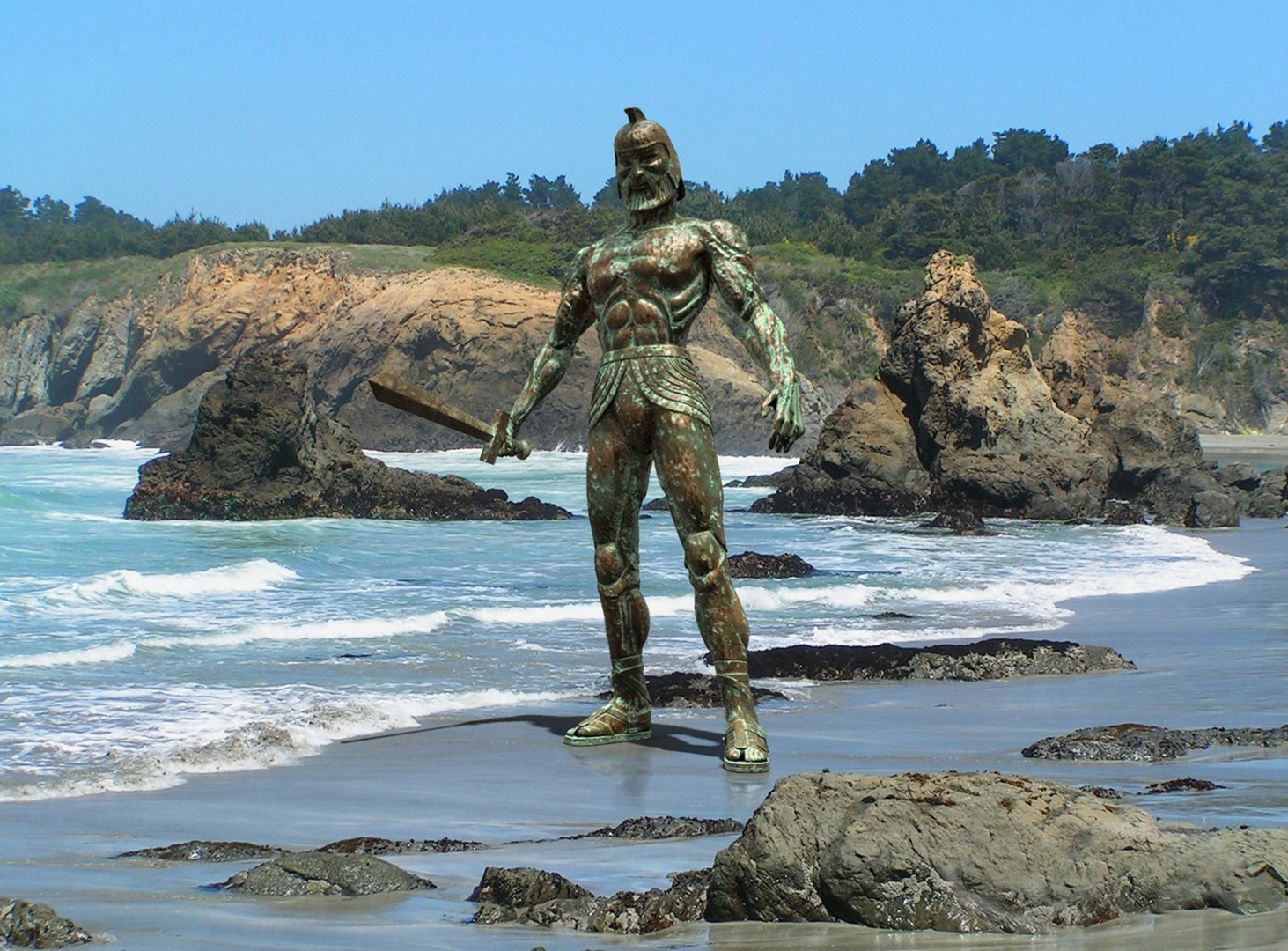 You may remember that Zeus, having fallen in love with Europa-beauty, rushed her to Crete after turning himself into bull. Thereafter, he showered Europe with gifts, as befits a generous lover. Among them was also Talos, a bronze giant and mythical guardian of Crete.

Talos, so called “triple copper giant” (according to other sources he was a bull), ran three times a day around the island to protect it from enemies. If an enemy ship approached the shore, the mighty guardian threw stones at it; and if the ship nevertheless managed to get closer, Talos heated himself (in the Cretan dialect the word “talos” was the equivalent of the Greek word “the sun”), burned wooden ships and killed enemies by squeezing in his embrace. Apparently, the myth pointed to the sacrifices of people in Crete.

According to the ancient descriptions, Talos was neither a man nor a god, rather a robot (automaton in Greek), a work of the genius Daedalus (or of Hephaestus). 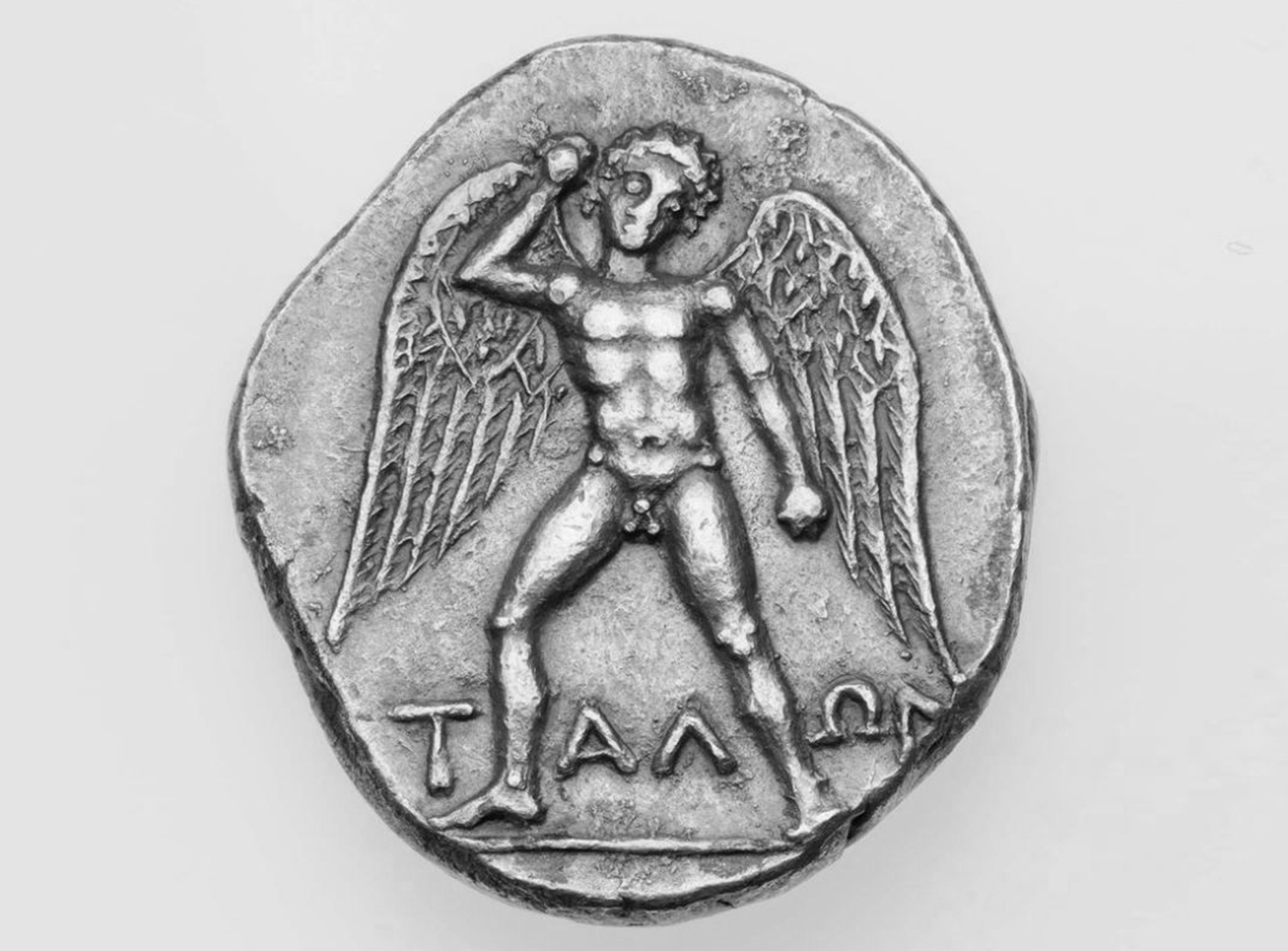 Designed in the image and likeness of a man, this combat robot was huge and invulnerable, having like Achilles one weak point. His only “vein” with ichor (blood of gods) running from the neck to the ankles and ending at the heel where a copper nail plugged the outlet. Once the nail is removed, the life will flow out of the copper body along with ichor.

Talos was not the only automaton mentioned in myths. Homer’s Iliad tells about some unusual tripod forged by Hephaestus:

“Twenty tripods he created at once

To position inside of his opulent home.

Having the wheels, they approached his guests of immortals,

Moving themselves by guiding thought alone,

And delighting everyone who witnessed that all.”

These verses deal with sophisticated telepathically controlled robots that were supposed to serve the feasts of the gods so that no mortal would hear conversations of the celestials. Hephaestus, the god of the blacksmiths, forged several dozen tripods rodding on small wheels between the feasting gods and bringing fruit, wine and a magic ambrosia drink according to guests’ silent desires.

In the Odyssey there is a mention of some gold and silver dogs which Hephaestus forged to guard the palace of Alcinoe. According to the myth, the same Daedalus carved sculptures out of marble that could move. The ancient Greek scientist Archytas of Tarentum created a wooden dove that flew with the help of a “secret spring”, and the mechanic Philo of Byzantium even surprised his guests with an automaton-maid who poured wine for them.

Now we get back to Talos. The mighty hero kept order and justice on the island itself. You must agree, it’s a difficult job, and his jurisdictional territory was rather big one: perhaps that’s why Talos is depicted with wings on the coins found in the Minoan palace of Festos; apparently to fly three times a day all over Crete.

So, the Cretans would have lived under the wing of the copper defender, if wasn’t for the Argonauts. They had already obtained their golden fleece in Colchis, took the fairy princess Medea with them and were returning home by sea. But since Medea was the niece of Pasiphaë, the wife of King Minos, they decided to turn to Crete, to visit her, and at the same time to replenish water and provisions. Talos probably did not understand what were family ties, and therefore, as usual, began to defend the island, throwing stones at their ship approaching the shore. But Medea managed to neutralize the giant. Either she put him to sleep with a magic potion and took out the copper nail from the “vein”, or Talos, after listening to Medea’s sweet speeches, scratched his ankle himself – the versions are different, but the ending is the same: a nail-cork jumped out of the copper automaton’s leg, all ichor flowed out of hole and ended the life of Talos.

Wikipedia, referring to a scientist’s version, explains the mention of “vein” as “an indication of the well-known technique of hollow casting. In the statue, made of wax and covered with clay, a hole was made in the heel for the subsequent flow of wax and clay from the statue, replaced by molten copper”.

The ancient Greek philosopher Plato believed that this mythical knight was a police official who traveled the island of Crete three times a year monitoring order and justice. According to his interpretation, Talos visited all the villages, observing the laws in them written on copper tablets. 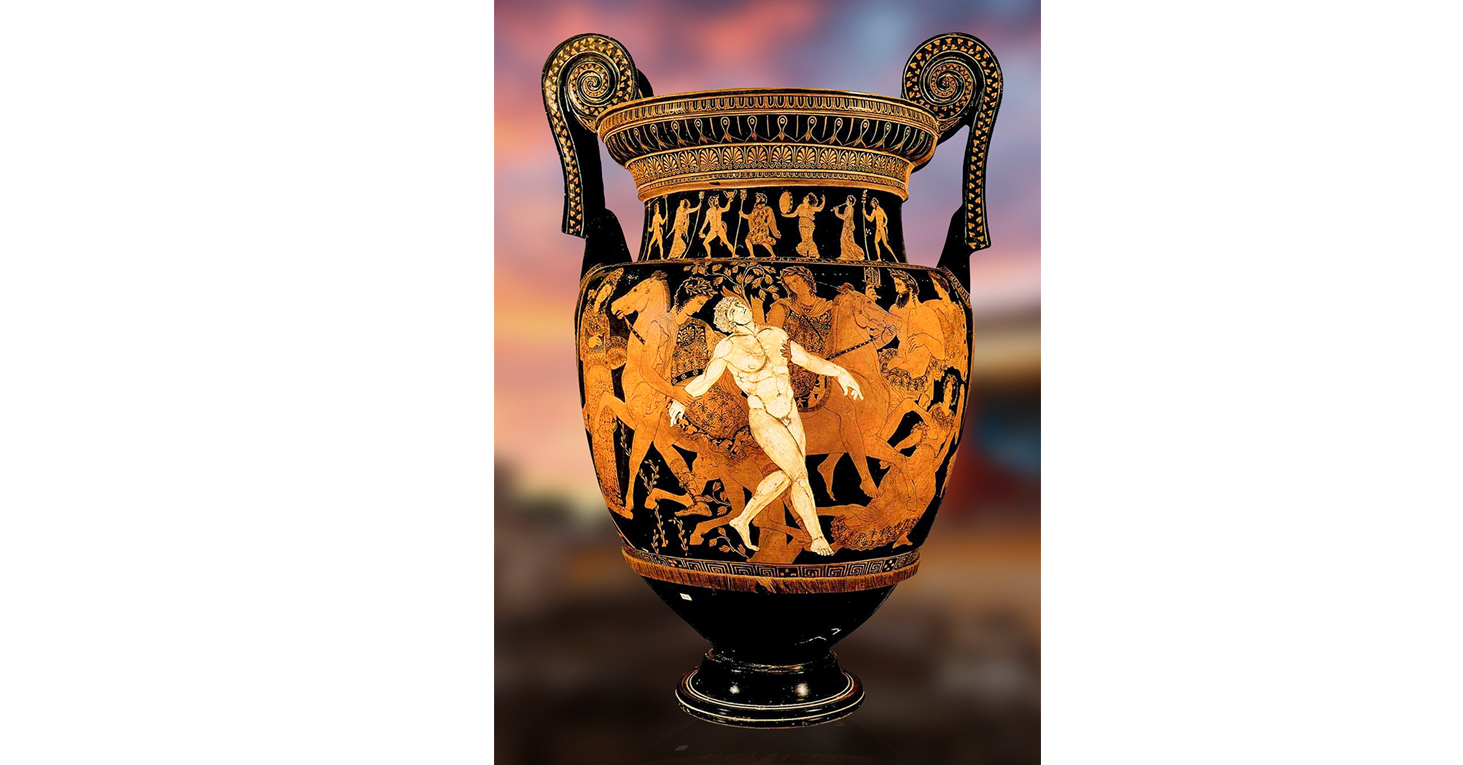 The death of Talos is depicted on an Apulian vase. In the center is the light figure of the dying Talos seized by horsemen, and on the side is the insidious Medea with herbs … Judging by the image, the maker’s sympathy is clearly on the side of the Cretan guardian. Not without reason Talos or Tal meant the sun; and Zeus himself was called in Crete with the epithet of Talaios