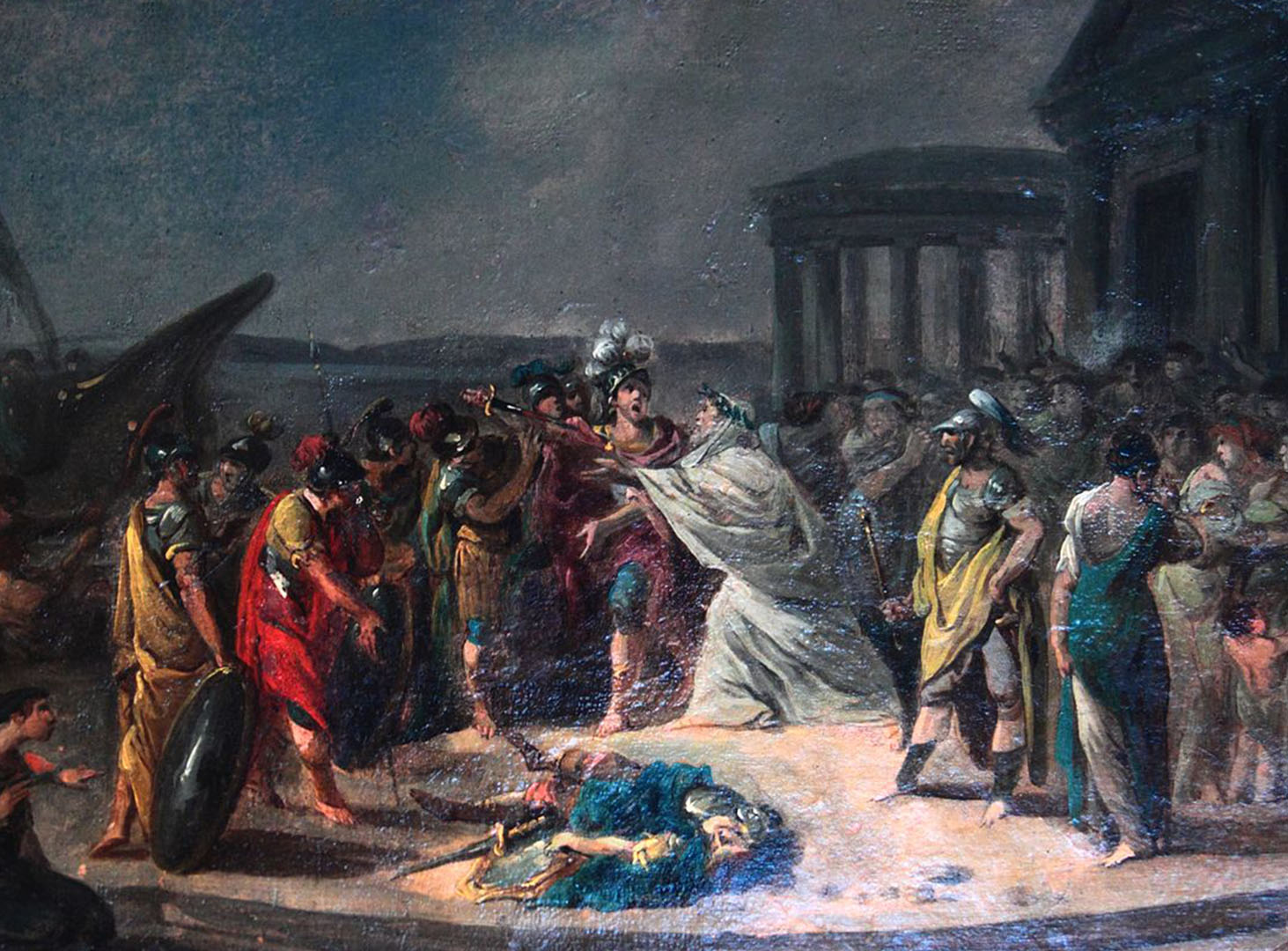 The inhabitants of Crete identify themselves as a special people, distinct from the Greeks, and this is not uncommon for the islanders. The same perception of themselves as a people being distinct from Anatolian Turks is observed among Turkish Cypriots. And there are justifications for it, historical ones.

For example, there are some of them for Crete.

In ancient times Cretans dominated the sea and did not even need to defend their cities with walls. This was because the major powers of that time, the Hittite kingdom and Assyria, did not have a military fleet, and Egyptians with Phoenicians sailed along the coasts without any opportunity to transfer their troops across the sea.

Caused by a giant cataclysm on the planet, Minoan eruption of the Santorin volcano, dated between 1645 and 1500 BC or exactly 1618 BC, according to Chinese sources (if one judges by the sudden climate change), destroyed the towns and the fleet, and led to the decline of the Minoan civilization on Crete. Penetration of Greeks and Pelasgians into the island gave birth to a hybrid Mycenaean civilization, in which the Minoan elements were combined with elements of the continental culture. Greek tales connect this penetration with the name of the legendary King Minos, when the Cretans themselves had to retreat to the mountains of the island. The fact that Minoan (i.e. pre-Greek) civilization was named after Minos is a historical curiosity recognized by Evans himself.

During the Homeric Age, the Greeks were not a sea people and did not like fish, and seafood. Being mountaineers they founded colonies in Asia Minor foothills, without crossing the ridges to Central Anatolia. Namely, food predilections and the search for water forced legendary Odysseus, sailing along the coastline, to land on unfamiliar islands, exposing himself and his companions to dangers. Inhabitants of the sea depths – fish, octopuses and dolphins being the favorite motif of the frescoes in the Cretan palace of King Minos – almost do not occur in the art of the Achaean Greeks. On ancient Greek coins and vases, there are images of different animals, even snakes, but there are no fish or marine inhabitants. In the region in ancient times, the fish appears on the coins of Lydia, the fantastically rich state of Croesus in Central Anatolia, but not on Greek ones. Truth be told, the first coins in the Mediterranean appeared exactly in Lydia in the second half of the 7th century BC. On Greek coins we find marine inhabitants after the 7th century BC and the beginning of the Great Greek colonization. At first, a seal called in Romance languages “phocidae” appeared as a crest animal of the Greek colony Phocaea in Asia Minor. It is unlikely that it was eaten, once they declared it to be their totemic animal. The Turks still call the seal “fok”, and the modern Greeks have already forgotten this name. A cancer appears as a crest animal оn the coins of Apollonia in Lycia – a Greek colony on the territory of modern province Antalya. Then the coins of Sinopa (Paphlagonia) were minted with the image of an eagle with fish in claws as well as coins of Panticapaeum (Kerch) and Olbia (Mikolaiv oblast, modern Ukraine) with beluga, stellate sturgeon, and tuna appearing on them. Olbian coins even had the form of dolphin. In Istria (a Black Sea town in the territory of modern Romania, founded by the colonists from Miletus), the eagle holds the dolphin in its claws, and in Apollonia Pontica, the predecessor of Sozopol in Bulgaria (one of the first colonies on the Black Sea founded by the Miletians in 610 BC), we see the cancer again as a crest animal of the city. We met a crab depicted on coins of the Greek colony of Acragas in Sicily, founded by islanders from Rhodes who already loved seafood. The Greek word crab (κάρᾰβος) was incorporated into the Portuguese as a caravel, apparently due to external similarity with the ancient ship (paws are oars, claws are anchors). Great geographical discoveries began with the caravel, and the latter appeared in Russian as a calque for “ship”. The ancient coins of Crete depicted, of course, the Labyrinth, and the archeologist had only to discover it.

But all described was already much later than the wanderings of Odysseus after the Trojan War of the 13th century BC. It seems, that this war had been lost by the Achaeans, and is indirectly confirmed by the excavation of Troy. In fact, the Trojan horse as a military trick is clearly a traditional mode of the Greek tragedy, called “the god from the machine”. God appeared with the help of special mechanisms allowing the continuation of a story to the fin. For example, he is descended from heaven to solve the problems of heroes. Are there imaginable such welcomes for winners, loaded with captured goods, like ones, experienced by the participants of the Trojan War at homes? Let’s take the Cretan king Idomeneo, the grandson of Minos. He came to the war with a large detachment of 80 ships. It is known that he personally killed in battles six Trojans and “did not lose his companions”. On the home way, he got into a storm and vowed to Poseidon to sacrifice, if he should arrive safely, the first person he should meet on land. This person becomes certainly his own son. He avoided to sacrifice him and caused the anger of the gods who spread plague. The Cretans finally decided to exile their king. According to another option, he performed the sacrifice of his son and then the angry gods caused pestilence, until Idomeneo was exiled by Cretans.

And in fact, there is may be not a spectacular plot twist but the unknown to us denouement of their confrontation, aroused during the absence of the father, as it is the case with other heroes of the Trojan War up to Odysseus. In the history of ancient civilizations, the seizure of power is quite a frequent occurrence in the absence of the father. Familiar with this, ancient Romans introduced a law “patria potestas”, which gave him power not only over his children, but made all their acquisitions the property of him. The father’s power over his son ceased only when he sold him for the third time into slavery: it was considered inhuman. Caesar abolished the application of this law to his soldiers: he was killed and the law restored.

In 1985, outstanding British explorer Tim Severin sailed along the Odyssey route, as he imagined, including the southern coast of Crete, and found there the Cyclops cave where Odyssey came into.