If during your wandering in Greece a wind takes you to the island of Sphacteria in Bay of Pylos, you will surely be amazed to see there a wooden chapel, which is completely Karelian in its appearance…

Sphacteria is a small rocky island with an area of about 3 sq. km, which borders Bay of Pylos known also as Bay of Navarino, off the coast of the Peloponnese, and is now uninhabited. There are there stones, dense thickets of bushes and … memorial signs in honor of the sailors of Russia, England, France who died in the Battle of Navarino in October 1827. According to historians, it was the battle of Navarino that largely determined the victory of the Greeks in the national liberation war of 1821, the 200th anniversary of which the Greeks celebrate in 2021.

Russians at all times did not forget about this place of military glory of their ancestors. The first monument to the fallen compatriot sailors and a small church were erected at the expense of the legendary Greek Queen Olga (Grand Duchess from the Romanov family). The inscription on the monument reads:

In memory of those who fell in the Battle of Navarino on October 8/20, 1827 and buried nearby. Erected in 1872 by Rear Admiral I. Butakov, the head of the HMR detachment (His Majesty’s retinue), the commander, officers and command of the Zhemchug clipper.

To the eternal memory of the Russian sailors who fell in the Battle of Navarino on October 8/20, 1827:

– on the battleship “Azov” 24 sailors

– on the battleship Ezekiel …

– on the battleship “Alexander Nevsky” …

– on the frigate “Provorny” – Lieutenant Nikolai Kupriyanov and three sailors;

Altogether, there were 65 of them.” 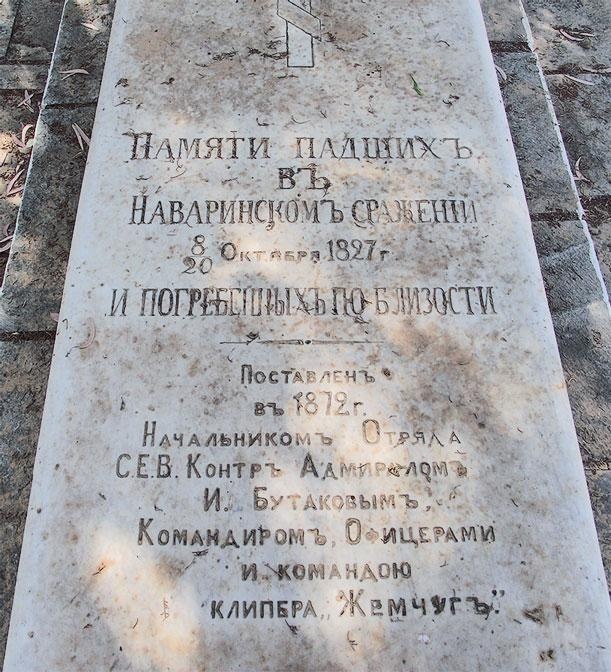 As we found out, the emergence of this plate resulted from efforts of the former naval sailor, expert in the history of the Russian fleet V. Lobytsyn and of the “Marine historical and cultural society “Petroflot”. It was made at the expense of Petroflot; on October 24, 1992, the plate was sanctified in the Church of Our Lady of Kazan in Kolomenskoye and transferred to the Greek Embassy for installation on the island.

In 1997, the mentioned wooden chapel, as if miraculously brought from the Russian North, grew here: in fact, the dismantled church was transported to the island of Sphacteria in 1997 by land and sea from Russian Petrozavodsk, where the Greek diaspora, headed by Mr. Mikhail Chakhov, put a lot of effort into the implementation of this project. The funds were collected by the entire Greek world not only in Karelia: some sponsors were relatives of Mr. Chakhov living in Greece.

Since that time, the chapel of St. Nicholas (the patron saint of sailors), which is so surprising with its unusual appearance in Greece, has significantly dilapidated; and the work of caring for it was taken over by the Moscow Greek Cultural Center and the Russian philhellenes (project manager was Yegor Prokhorchuk, Dean of the Faculty of Medicine and Biology of Pirogov Russian National Research Medical University).

The work on the project lasted two years; and last Saturday, August 14, the necessary building materials were unloaded at the Greek port!

All renovation is scheduled to be completed by October. “On the days of commemorating the Battle of Navarino, we will be able to hold a prayer service in the restored church!” is written on the page of the Greek Cultural Center.

The memory relay is not interrupted … If you visit Sphacteria—bow to the dead “without distinction of rank and religion” as is customary in Greece.