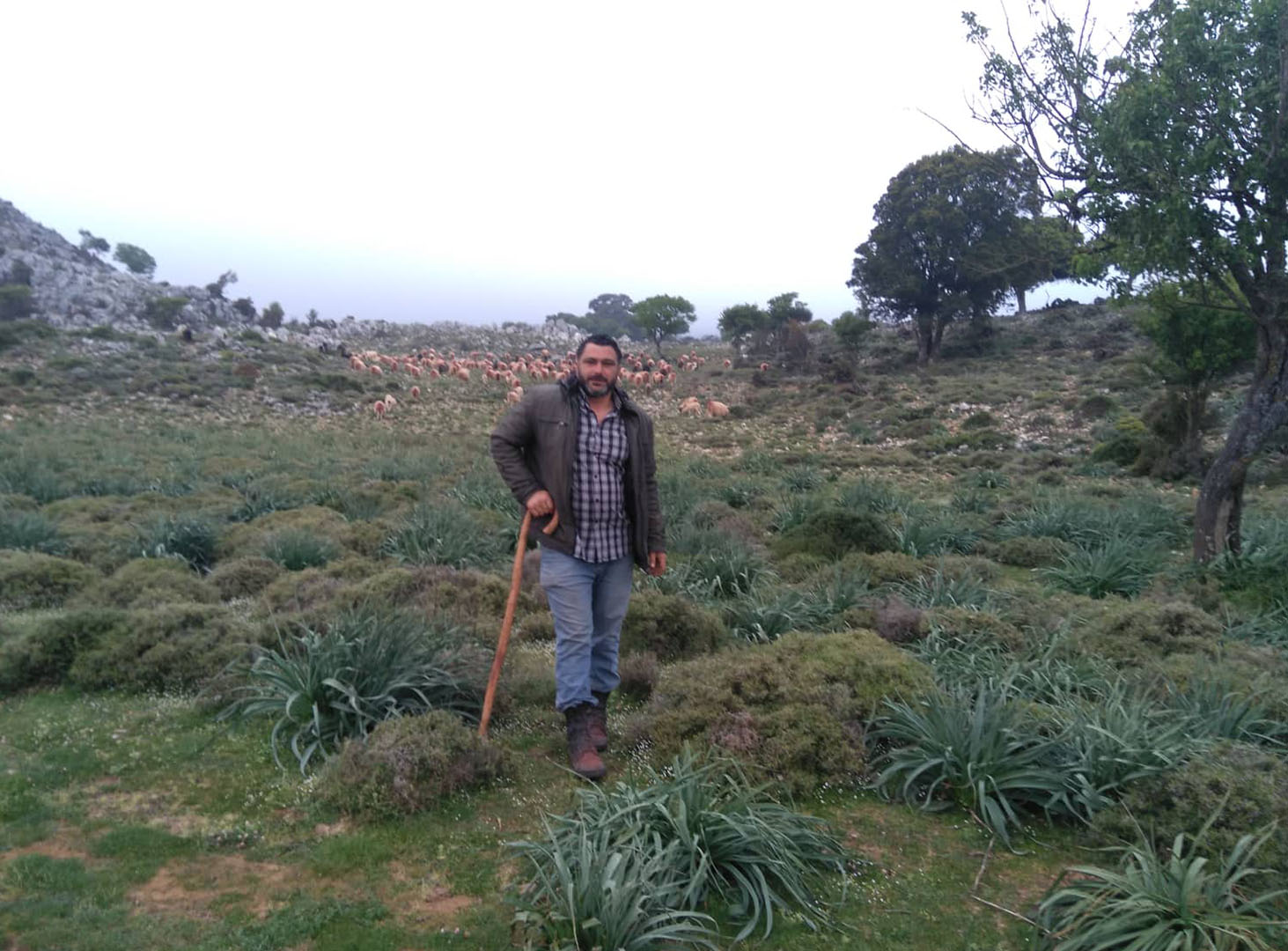 The job of a shepherd is one of the oldest. Of course, the free grazing of animals is less and less practiced in modern agriculture. Progress is going on: green meadows are replaced by compound feeds, and milkmaids’ hands are replaced by automatic milking systems. Very often we hear about hormones and antibiotics used by raising livestock, etc. But, when it comes to countries with farming and animal husbandry concentrated mainly in private hands, we are returning to the natural process—like it were thousands of years ago; and Crete belongs to one of them.

Christos Hnaris is a hereditary shepherd, and we decided to ask him on his profession and tell readers the most interesting things of his working days on Crete.

NC: At what age did you first get to know this job?

CH: I started helping my father with herd from a very early childhood, like all my brothers.

NC: How many generations in your family have been shepherds?

CH: All generations, which can be remembered by me and my father—they were shepherds. (Author’s note: The Father of Christos, Vasilios, is 84 years old, and he still helps his sons in animal husbandry and agriculture).

NC: How many animals are in your herd?

NC: How is your work day usually? Is there a difference between summer and winter?

CH: Of course it does. Each season has its own job requirements. For example, in autumn we feed animals much more than at any other time, as we prepare them for the birth of offspring: both sheep and goats. In winter, you care about childbirth and help in nursing. Sometimes mothers refuse to feed their offspring or die during childbirth. In this case, we “manually” nursing and raising babies. Such animals grow as friendly and sociable in relation to people. In the spring, we separate the offspring from the mothers and begin to milk the sheep and goats: over the next 4-5 months we produce milk; and in the summer, we rest from the hard work done (of course, continuing to feed, milk and monitor the herd’s health), and preparing for the next season.

NC: Is your herd always in the same place or wandering in search of better grass?

CH: If the herd is always in the same place, the problem of finding food begins, so I have to take them from one place to another. In the summer, we are going to the mountains in the center of Crete, but in the winter I drive the flock to warmer places, closer to sea, where the winter is not so harsh. 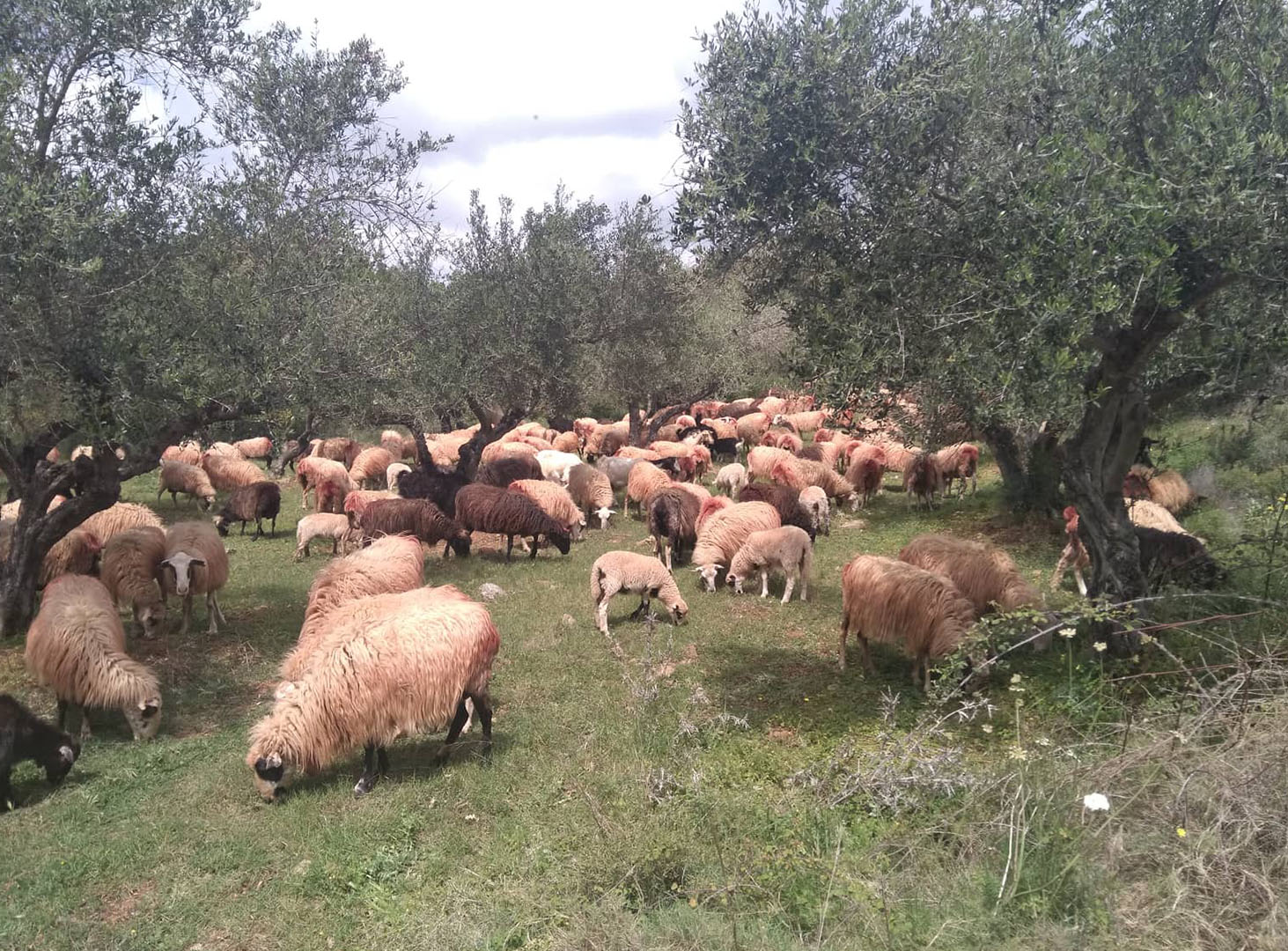 NC: Is it a hard job to drive so many animals?

CH: Not at all, because the animals remember the way and go on their own.

NC: Do dogs help you in your work?

CH: Certainly! They guard the herd when I’m not around, they also help to separate several sheep or goats from the herd and drive them to me during milking. Dogs love sheep’s milk, which get after their work.

NC: How much milk can you get from one sheep and a goat per day?

CH: About half a liter from a sheep and one liter from a goat per day. Sheep’s milk is much fatter than the goat’s one. 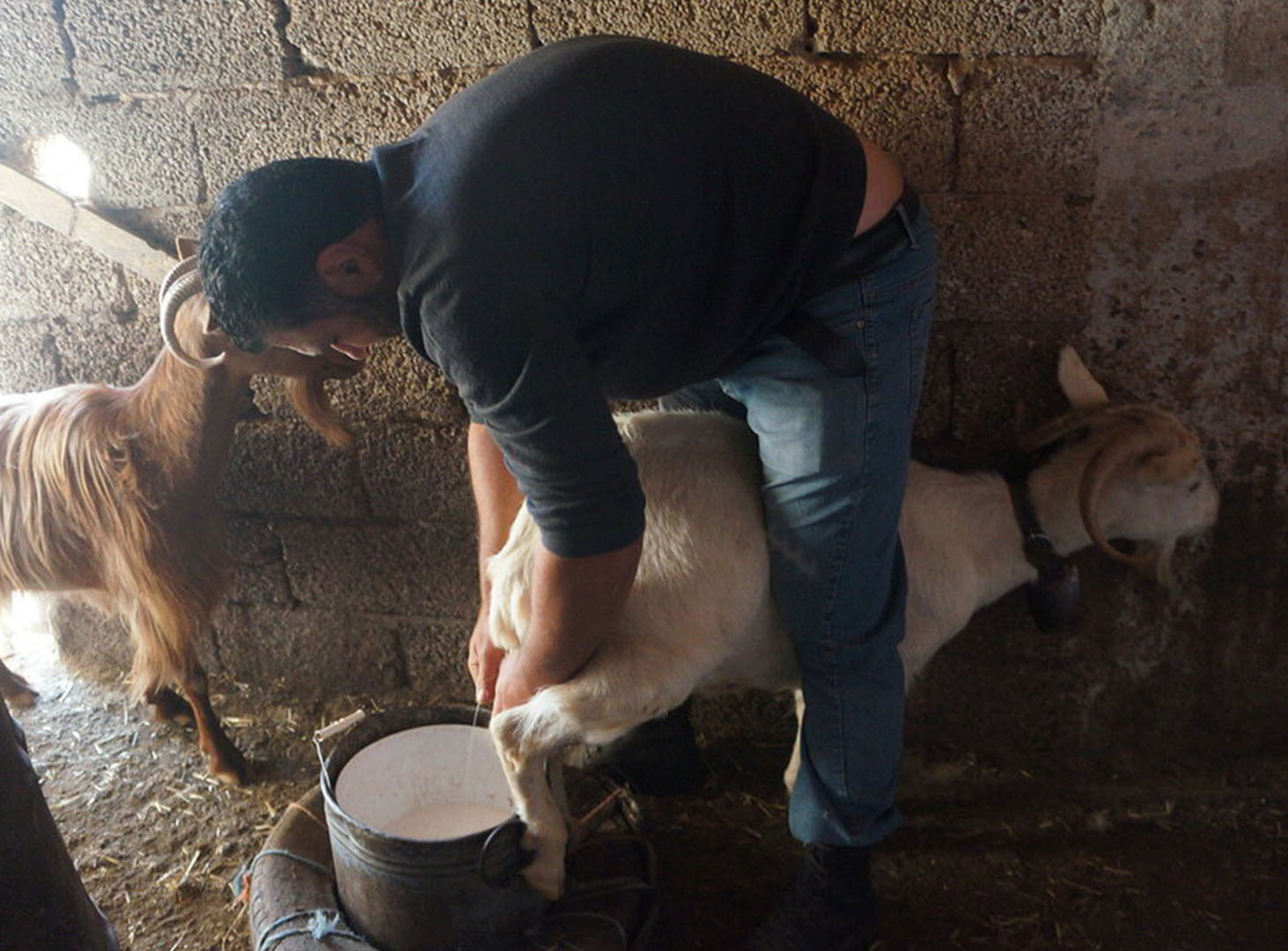 NC: What are you doing with so much milk? Do you produce your own dairy products?

CH: I sell most of the milk I get from the herd to a dairy factory and a cheese factory. When the dairy factory closes (Author’s note: At the time when the shepherds have little milk and the factory has little work), I produce some types of cheese and other dairy products for my home.

NC: How often do you shear your animals? Where do you get the wool? Do you sell it?

CH: We shear only sheep (not goats) once a year. In the past, women bought wool from shepherds, and using weaving machines they made from it clothes and bedspreads, and all the accessories for the home. But now no one is doing this hard work requiring a lot of time and efforts, respectively, no one is buying wool from shepherds. We just throw it away. By the way, during the shearing of the sheep we arrange a small feast with food, wine and music. This festival we call “Cures”, a great opportunity to spend time with family and friends

NC: Why do shepherds make incisions to the ears of animals?

CH: Each shepherd on Crete makes small signs (incisions) on the ears of the sheep and goats of his herd. He makes them in his own unique style, since often enough animals can mix when meeting with another herd, and according to these signs the shepherds distinguish precisely their livestock.

NC: Are there cases of animal theft?

CH: Certainly! It may happen all year and all the time. A very big problem for a shepherd: every morning you don’t know whether you will see your herd on the spot, and whether you will meet your animals.

NC: We wrote in our newspaper that it is customary for shepherds to swear innocence of animal theft in front of the icon of St. George in the monastery of Discouri?

CH: Yes, this is true. The fear of deception in front of this icon helped out many times the shepherds with their stolen animals or, conversely, it removed suspicions from the accused person.

NC: Do you think that a woman can cope with this work?

CH: My work is very difficult, and I think that a woman could cope with it, only if she was fully equipped with new technologies in all herd life processes but not in traditional conditions on Crete, as I and other shepherds have.

NC: Is it profitable to bee a shepherd these days?

CH: Nowadays, this is not as profitable as in the past: we have a lot of expenses, and every year incomes are getting less and less. We are forced to sell our products very cheaply. The climate change in recent years is also not conducive to generating large incomes. In the years of drought, when it rains little, there is little greenery to feed animals, so we are forced to buy dry food to provide the herd with adequate nutrition. Of course, these days there are more new technologies making our work easier, but all the costs have increased significantly. 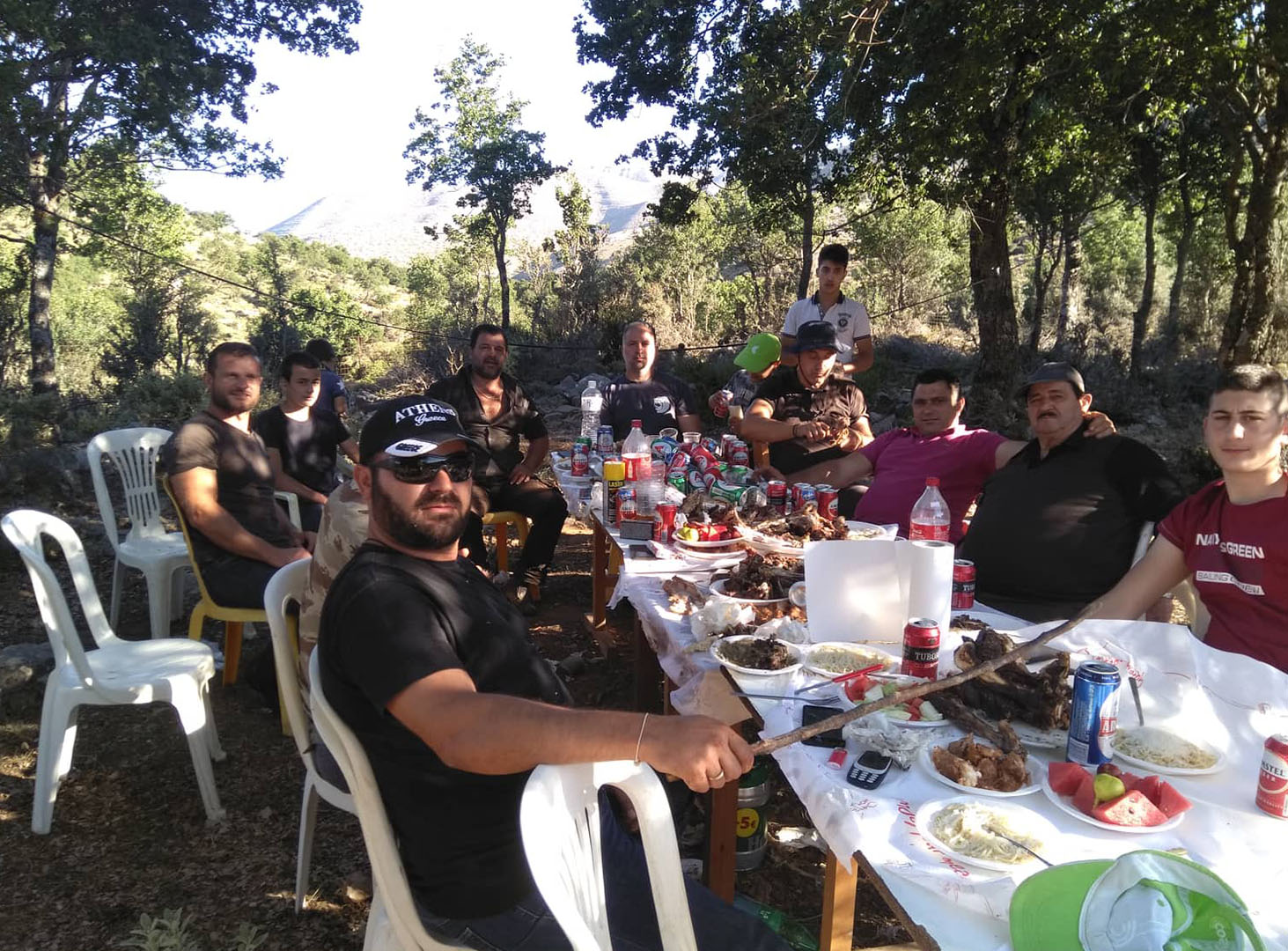 NC: Have you ever regretted becoming a shepherd? What else could you do?

CH: Yes, I regret it, because it is a very difficult and unprofitable profession. If we talk about another one, I think that I could organize some interesting business in the tourism industry on my island.