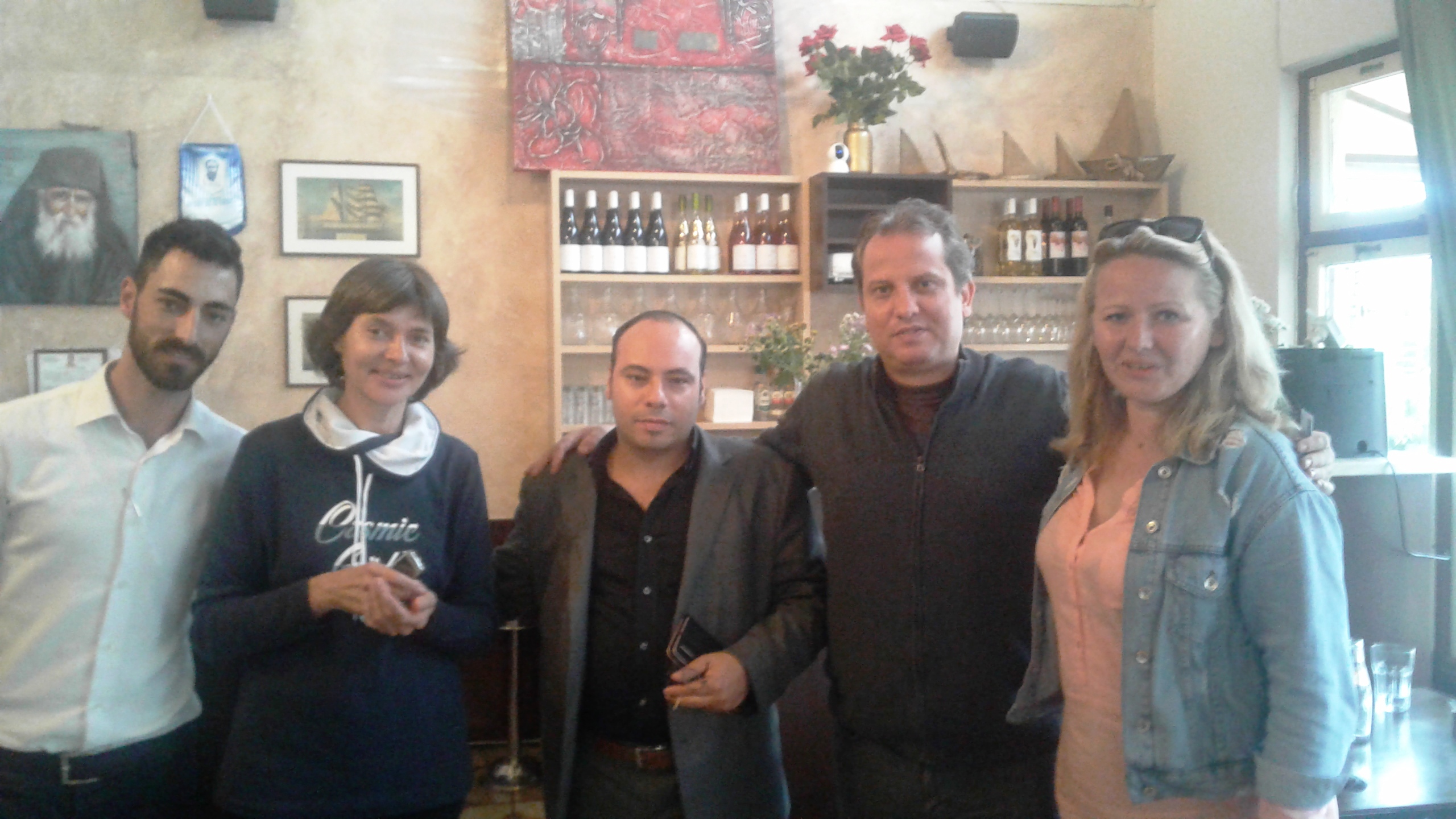 In early November, our team of the New Crete went to the island Crete, and the trip worked out the way we have not planed: we either ended up at St. Mina’s Day in Heraklion, then at Mother Theofilakti in the Paliani Monastery, or in the cave of St. Miron. Even while dinning and waiting in a tavern until the rain is over, we received greetings from St. Paisios…

No, thank you! I can’t do it anymore! But here, from behind the curtains, Stavros appeared again with another steaming dish. Oh Stavros! What El Greco painting did you come down with your subtle profile and icon-painted face? How can we not try this masterpiece from you? Again, a sea bass is melting in your mouth, a shot of raki and the classic “Yamas!” 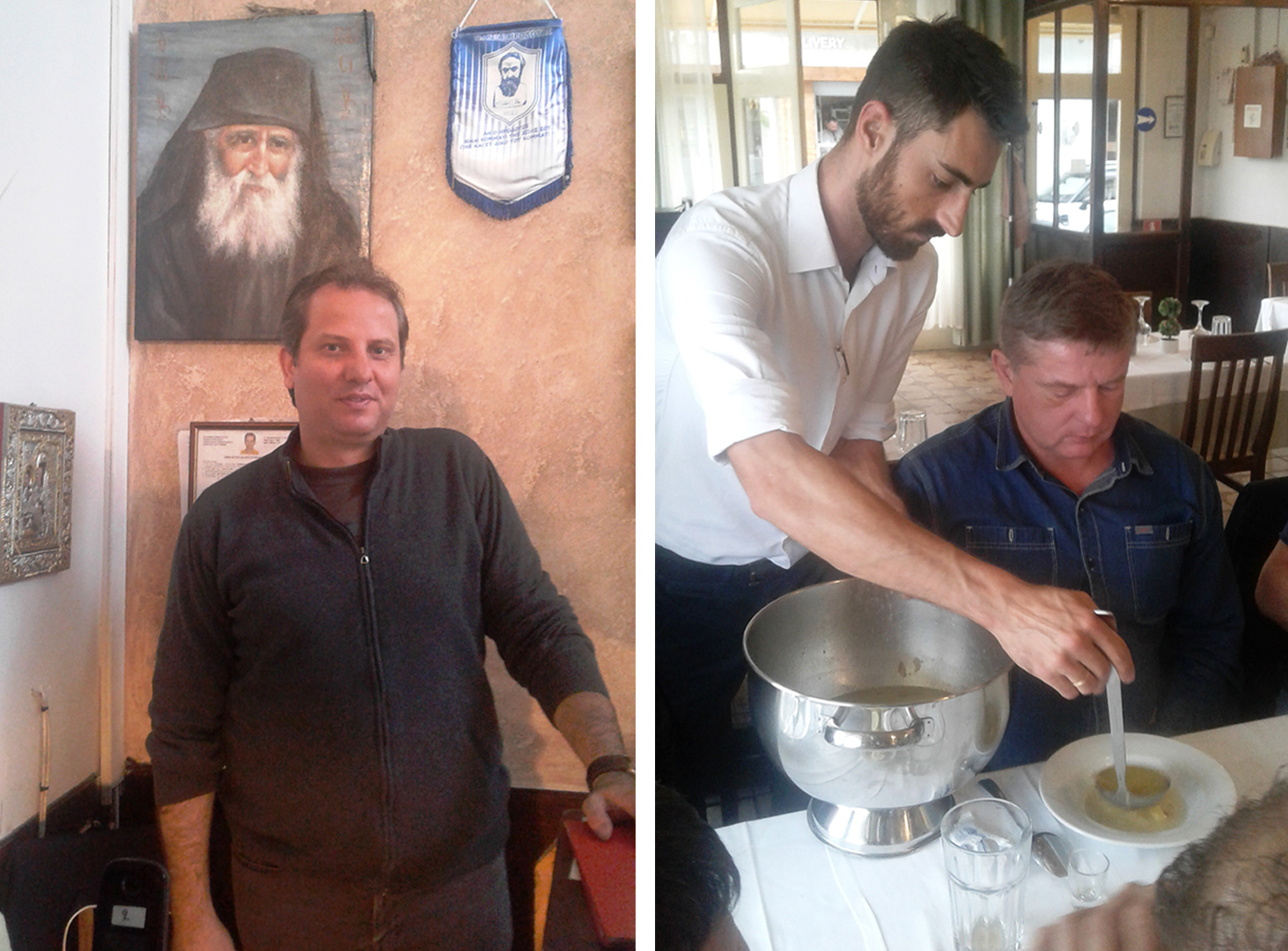 The rain got a little tired at a time of our twentieth toast, and we saw a kid of four years old playing with a sliver in a puddle at a cafe opposite. Parents at the counter, if they objected, were not too opposed to this way of his knowing the world.

“We need a boat!”–dawned on one of us who remembered his own childhood. There was no matchbox to construct an Argo, but napkins were enough to do even a sail. Little Athanasius was slightly shy at first before he set sail on our Argo….

As it turned out, our manipulations with napkins and toothpicks were watching. At first, we decided that at a table near the counter there was also a guest, but it turned out that the man was the owner of the tavern, Manolis. Our Cretan friends helped with translation of his words, and soon we, a little dumbfounded, were waiting for a gift, for which Manolis ran home(!). When he returned, we gasped: not purchased, not souvenirs–the real monastic komboskini prayer ropes laid on the open palms of Manolis. The very ones where each bundle consists of nine “crosses” and nine prayers, the very ones that protect from misfortunes and temptations… 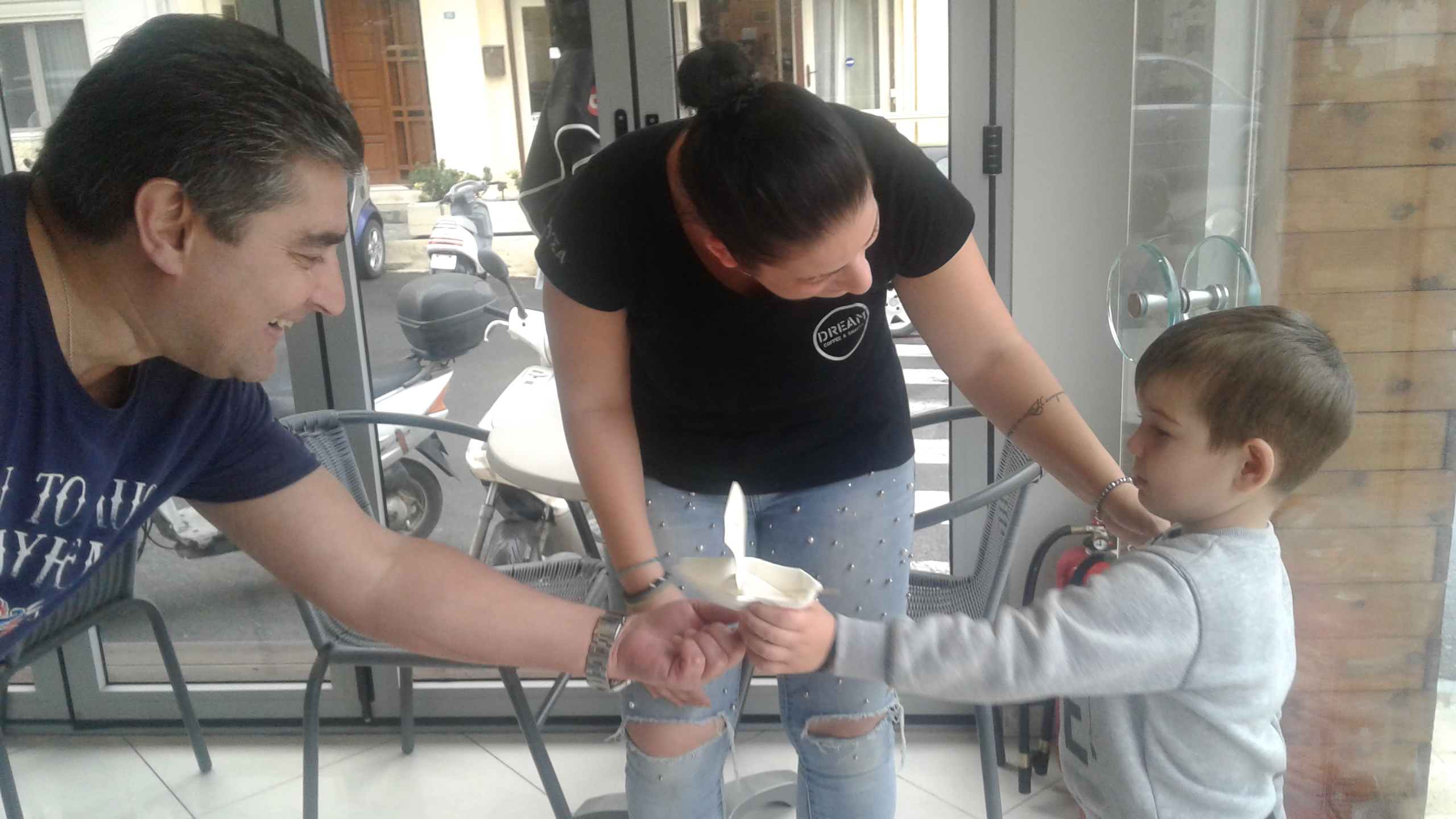 Manolis brought them from a pilgrimage trip to Thessaloniki, where he goes every year with his family, as far as we understood from the translator’s explanations. Nearby, in the town of Souroti, an old man Paisios is buried, the same one whose image was shining in the corner of the tavern… Even a not to churching Russian is familiar with the Elder Paisios because of a film of Stolyarov “The Elder Paisios and I, standing upside down.” We do not dare to judge how close the protagonist of the film is to the prototype, but the simple truths discovered by us in Crete coincided very much with the idea of ​​the film. Paisios in a chicken coop and in a garden, in a hut and on a bench, with a glowing face, like it has most Greeks, like mother Theofilakti or like Manolis telling about his trip to Thessaloniki… Every time while entering a Cretan temple, we recalled: it seems that the main thing in the faith of the Greeks is simplicity; and their saints are just wise, and kind people, like St. Myronas or Paisios of Mount Athos. Maybe that’s why he is so loved in Russia?

“Wikipedia” states: “The Holy Priest (the worldly name Arsenios Eznepidis) is a Schemamonk of the Orthodox Church of Constantinople. One of the most respected Greek elders and spiritual leaders of the Greek people of the 20th century, the monk of Mount Athos, known for his ascetic life, spiritual teachings and prophecies.” But at the same time, our hero had the profession of a carpenter. In 1945 he was drafted into the army and served as a radio operator for three years. Only in 1950 he went to Mount Athos and became a novice and then a monk… At one time he lived in a monastery in Sinai, then returned to a monastery on Mount Athos. How do schemamonks spend their days? The above-mentioned film tells in detail about this. We will only clarify that the Elder Paisios had a lot of spiritual children and pilgrims who came for his advice, help and consolation.

How is he associated with Thessaloniki and Souroti? In 1966, Paisios was hospitalized, where the attendants taking care of him were women wanted to spend the rest of their lives serving God; and thanks to the efforts of Paisios already in 1967, the first sisters settled in the Theological Monastery of St. John founded by him. The elder spiritually nourished the monastery for 27 years and twice a year came to visit his sisters; and at the end of his life he moved there permanently. In 1994, the holy Paisios died and was buried there in Suroti. Fortunately, the nuns of the monastery recorded the statements of their spiritual teacher, and thanks to this, Russian readers were able to get acquainted with the thoughts of the holy Paisios (although, who knows whether or not the author himself would entertain this).

In 2015 elder Paisios was recognized as saint by the decision of the Holy Synod. 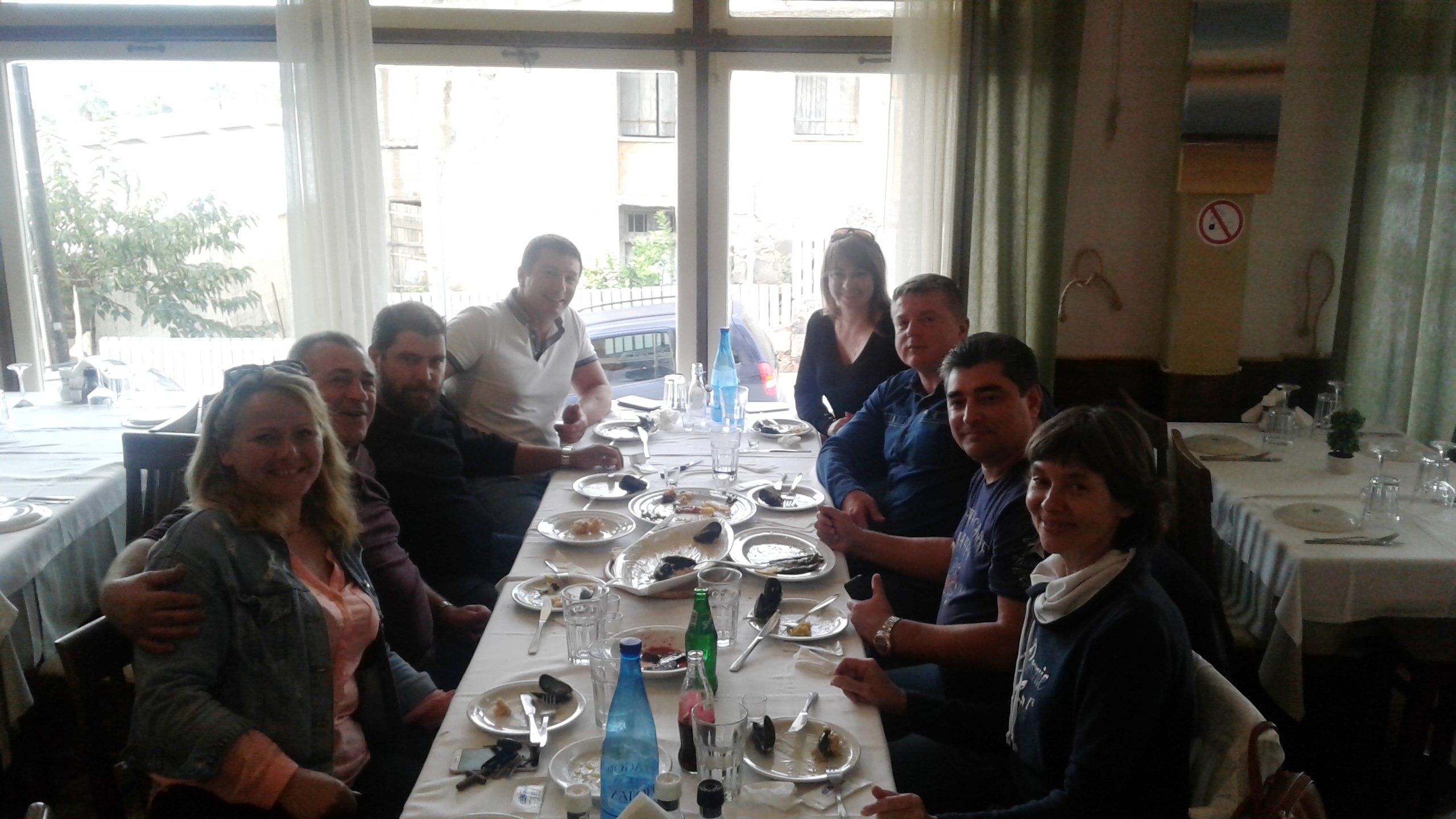 Wy was we chosen?

We asked this question to Manolis bearing in mind that the komboskini from the monastery in Souroti are too important for the pilgrim to distribute them like that. Our interlocutor smiled and said that, firstly, he liked us, and, secondly, the monk, from whom he received komboskini said that they were woven with love, that receiving this blessing and love everyone should pass them on…

At first, we were too shy to have such a responsibility: how do we get involved in this relay race, bequeathed by the Elder Paisios? But the author of the idea with a boat for the child (see the beginning of the article) didn’t make a mistake here: he went to tinker… little airplanes for the same kid.

Do you now understand, who the Russian tourists are for the four-year-old Cretan Athanasios? These are those who know how to build boats and planes, laugh out loud and like to give gifts. Perhaps the Elder Paisios would also have liked…