Skip to content
TheNewCrete > Advise > One more gift from Crete!

Spices and herbs of Crete!

Our newspaper has previously written about the Creta Carob (carob syrup) and Cretan soap. What else can you bring as a gift from this island?

Crete is very famous for its herbs that grow almost everywhere: in the mountains, coastal areas, and even in settlements. Crete is a real pantry of not only fragrant, but also medicinal herbs: some of them are endemic and grow only on this island.

Here you will find chamomile, sage, rosemary, marjoram, mint, oregano, basil, honeysuckle, laurel, cumin, savory, echinacea—these are only the most famous of herbs. On Crete grows Cretan dictamnus (Cretan oregano), endemic plant growing only here, which is known for its beneficial properties.

It is not surprisingly, that many dishes of Cretan cuisine, considered one of the most delicious in Greece, owe their flavor to aromatic herbs. On Crete, you can try the famous mountain tea. The locals add up to 12 different mountain herbs to tea drinking it in winter with honey and with ice, and orange zest in summer.

Herbs weigh very little and do not spoil on your way home, besides, they are not expensive! Virtually every resort town has good herbal shops!

It is a medicinal drink. This tea is picked in the mountains at an altitude of 900 m. The healing properties of Malotira were confirmed by clinical trials.

Mountain tea is an exceptional plant growing only in Greece. For some reason, Nature gave this unique plant only to the Greeks, having deprived all other Mediterranean countries.

An elixir from brewed herbs of mountain tea was instantly given to the warriors wounded during the Trojan War. Long-lived Greeks have also successfully consumed it for millennia. Due to the use of mountain tea, the average life expectancy of modern Hellenes is 79 years for men and 82 for women.

The secret of the herb of mountain tea has recently been deciphered by scientists: it turned out that the grass contains high concentrations of flavonoids and tannins, which makes it not only an indispensable medicine for colds, but also promotes rapid cleansing of the body from toxins and harmful products of the body’s internal metabolism. Strengthening the immune system, mountain tea gives a powerful effect on the body, allowing it to cope with a cold in a short time. Of course, this property is especially vividly manifested after prolonged use of tea to prevent disease. 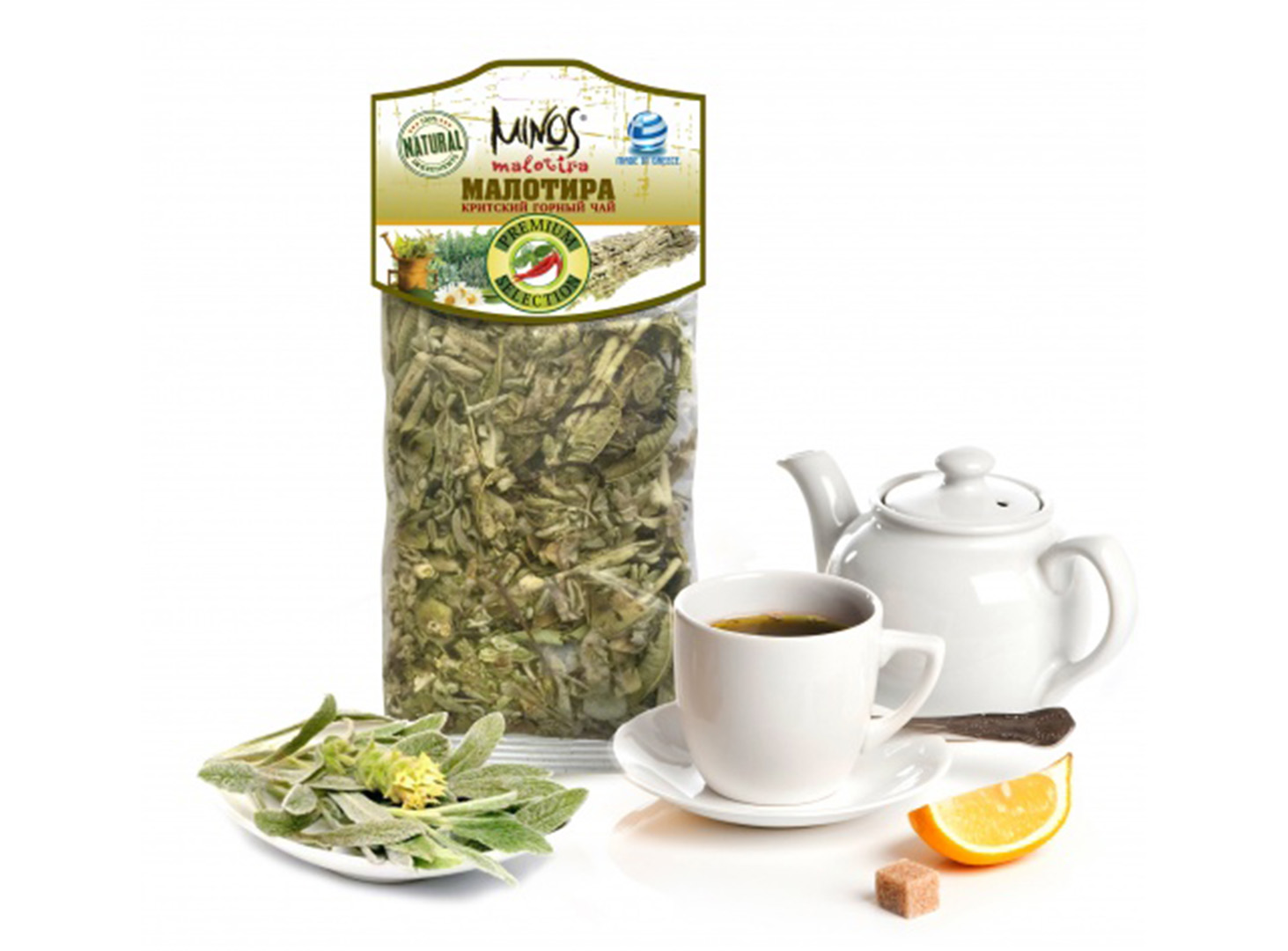 The Latin generic name origanum dictamnus was originated from Dikti Mountains on the island of Crete, and the Greek word θάμνος means shrub. Dittany is a shrub growing on Dikti Mountains. These are perennial rhizomatous plants with pink, white, lilac flowers in racemes.

Origanum dictamnus means Cretan oregano (Dittany of Crete). Cretan oregano is popular on the island and was it in ancient Greece: it has been considered a medicinal plant since ancient times. Hippocrates recommended it for stomach and against diseases of the digestive system, rheumatism, arthritis. This plant is very popular in the traditional medicine of Greece. Doctors of antiquity, Hippocrates and Dioscorides, described that even goat, in which the hunter’s arrow fell, chewed this grass and applied it to its wound. The plant had such an effect that the muscles relaxed, the arrow went out and the wound healed faster.

According to mythology, it was dedicated to the goddess Artemis, because she helped women in childbirth; therefore the ancient Greeks represented the statue of Artemis wearing the dittany wreath. Hippocrates used a decoction of dittany as a choleretic, health-friendly remedy, as well as a remedy for edema.

It helps with colds, runny nose, flu, headache, dyspepsia and rheumatism. When applied topically, it is used in the treatment of injuries. They drink dittany tea. The taste of this tea resembles the usual one with thyme.

Cretan dittany grows by itself in the highlands, ravines, rocky gorges. Even in recent times, the collection of it is a very dangerous occupation for the men who risk life and limb to climb precarious rock faces where the plant grows wild. They were named erondades (love seekers) and were considered very passionate to go to such dangerous lengths collecting the herb. However, dittany of Crete has always been highly prized; it is gathered while in bloom in the summer months, and is exported for use in pharmaceuticals, perfumery and to flavor drinks: such as vermouth and absinth.

It is collected in the mountains. Sage is a very popular herb with a strong smell and taste.

It is a tonic means helping with fatigue and also used for pharyngitis (rinsing), in cardiology, gastroenterology, inhalation, with hair loss, and gas formation in the intestines. It is good to drink this tea after a serious illness (helps restore the body) and is recommended for women with irregular menstrual cycle, as well as with a premature menopause.

Preparation: Put 2 teaspoons and let boil for about 3-4 minutes to drink in the winter hot and in the summer cold. 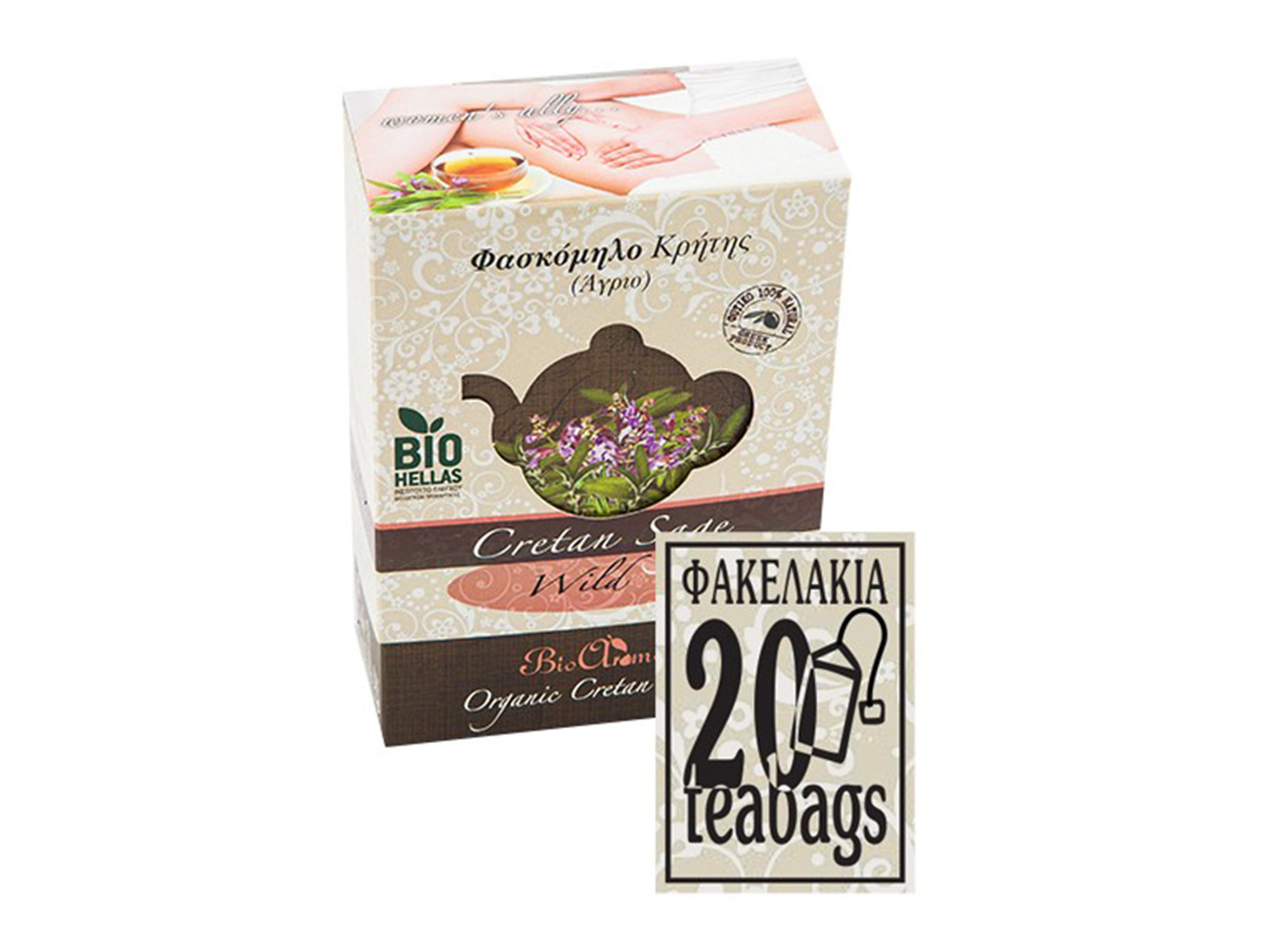 Louise helps with detoxification, with the removal of unwanted fluids, cellulite and is an effective means of tightening the skin. It is very popular in Europe and has been used as a relaxing drink for centuries: in folk medicine, widely used as a febrifuge drink. It emits a strong lemon scent and has a slightly tart, but tasty flavor.

Calendula has been used in traditional medicine since the 12th century as an antispasmodic means, especially useful for the stomach and liver, as a tonic. It contains flavonoids, alkaloids, vitamin C, calcium, carotene and vitamin A.