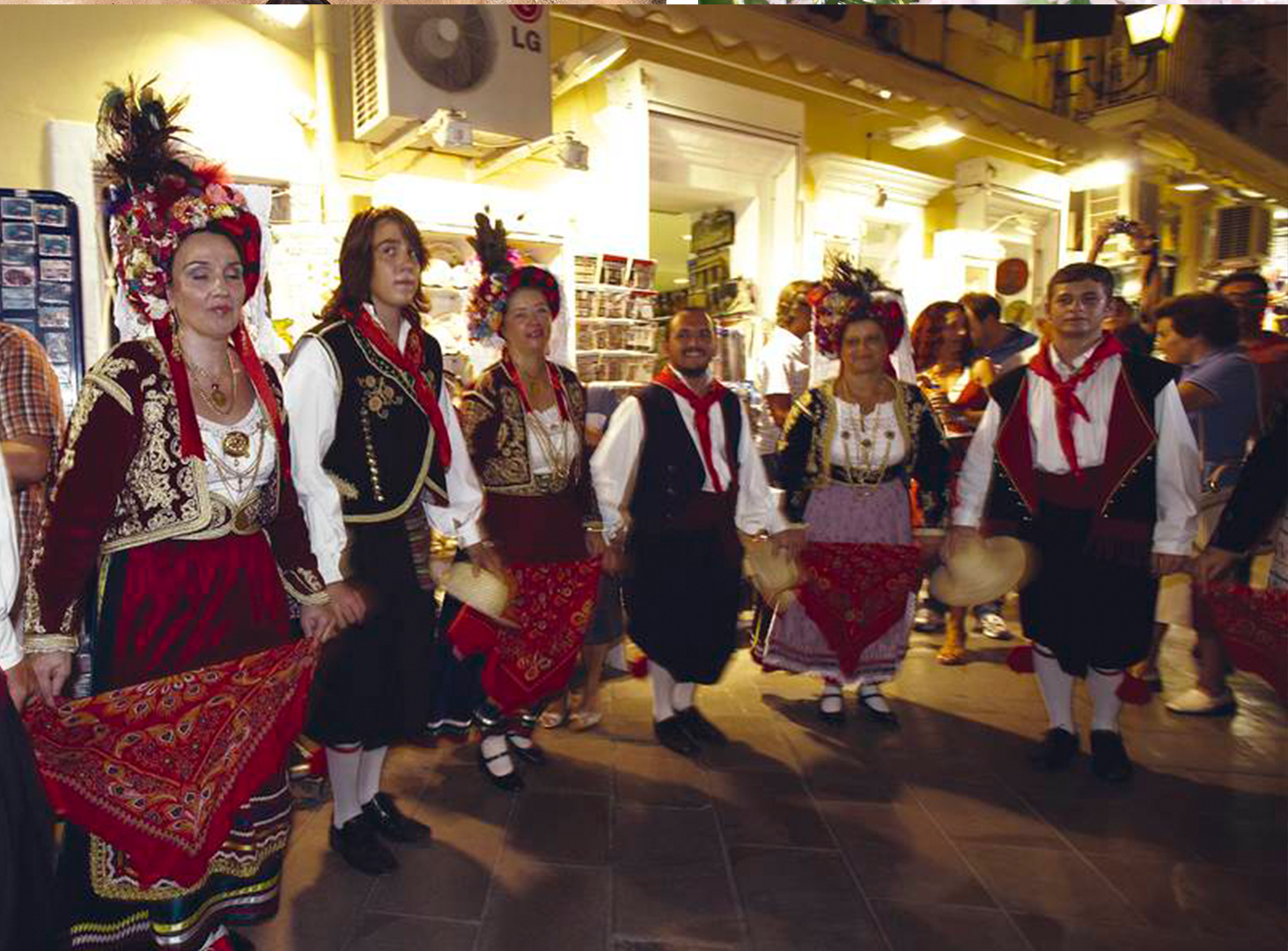 Interesting festivals and fests on Crete in July

Many travelers often try to visit some local festivals and fests. If you don’t have any interest in standard types of relaxation like pleasures of beach or sightseeing, then event-based tourism is for you.

In this issue we continue the rubric devoted to the said events (we started with it in the issue №13, which can be found in the archive of the digest: http://thenewcrete.ru/?loc=Archive).

In July you can also join a lot of cultural events, which fortunately will be very many in all regions of the island.

Exhibition “Tériade, éditeur. Pictures and letters” in the Municipal Gallery of Chania

This exhibition is presented in collaboration with the Stratis Eleftheriadis-Teriade Museum-library as a tribute to the editor Teriade. The exhibition, which is held from June 28 to September 15, includes his collection from the island of Lesbos and contains paintings of Theophilos, a talented representative of the naïve art, who can be placed in the history of the naïve art between Chagall and Pirosmani, if talking relatively, and was opened to the world by his countryman Teriade. There are there paintings by Marc Chagall, Fernand Léger, Le Corbusier, Alberto Giacometti, the Cubists, such as Pablo Picasso, Henri Laurens and Juan Gris as well as the Fauves like Henri Matisse, Joan Miró, Georges Rouault, and Marcel Gromaire.

The exhibition is supported by the Ministry of Culture of Greece.

The 42nd Wine Festival in Daphnes

It’s the second of famous festivals dedicated to wine, though less luxurious, and takes place in Daphnes where they make the most famous wine of Crete – ”Malvasia”.

This festival aims to introduce visitors to local Cretan producers and is accompanied by a tasting of their products.

The festival is open daily from 18:00 to 21:30. At this time, various entertainments are held at the central square of the village, as well as an exhibition of paintings, pictures and mosaics in the administrative building of the village. By the evenings there will be there performances of music and dance groups.

The most important sporting event of the summer!

The Cliff Diving 2017 is a jumping by world-famous athletes in different styles from 17,50 yards tall towers installed at two pointes of a cliff on the north side of Lake Voulismeni. The safety of athletes immersing in the lake will be controlled by the World Diving Federation. The event will include professionals and amateurs, members of the World Dive Federation from different European countries, who will first dive in Greece.

In the Cretan calendar of events, it is not last one and attracts spectators thanks to a huge variety of performances. You can visit modern and ancient theatrical productions, dance and music shows or discover new talents during song competitions. The mood of performances varies from funny to breathtaking. Undoubtedly, an important part of the program is the fair of Mediterranean delicacies and wines.

In the framework of the festival, particularly active tourists arrange karaoke competitions. On numerous beaches of Paleochora there are swim competitions, diving and water attractions. At this time, curious dolphins swim to the peninsula, and local residents argue that lucky people can also see a sperm whale.

During the festival, you can taste fine local wines for free, though you still have to pay an entrance ticket. In addition to the wine tasting, you can try local dishes as well as delicious confectionery products and will be fortunately supported by a vitamin cocktail made with fresh vegetables, and juicy fruits. As a true festival, it will be accompanied, of course, by vivacious dances and melodic music.

Singer Eleonora Zouganeli is one of the most important representatives of the modern Greek music scene. For many years she is present in the music world. It’s a voice that is inextricably linked with our feelings, it reflects our joys and sorrows, love, passions, and experiences, it speaks for us!

The concert begins at 21.00. More information on the site

Kyrvia is a festival of Cretan culture. In the prefecture of Lasithi, almost in every village, it starts in the middle of July and usually lasts until the end of August. In the program of events are performances of local folklore and variety groups, plays as well as exhibitions. On the beaches of Ierapetra, there are parties for young people and theatrical performances in the fortress of Kales.

It is an international modern dance festival in Chania with famous dancers and choreographers from Greece and other countries.

In July and August the city hosts the Lato cultural festival with concerts of local and international musicians, folk dances, contests, theatrical and art exhibitions.

This festival takes place in the south of the island, in the town of Tympaki, which is a part of the municipality Faistos, and includes music and dance performances, plays, and films screenings. Another major part of this event is a “fishing night”, when locals and gests, if they want, go to sea at night to catch fish.

In the town of Tympaki, there is the Cretan Ethnographic Museum.

It’s celebrated in cities of Chania, Heraklion and towns of Agia Marina, and Agia Pelagia.

For many centuries, the village of Thrapsano was one of the most important pottery centers in Crete and is located 15,5 mi southeast of Heraklion. The very name of the village comes from a Greek word meaning “crocks”: near kilns for pottery, earth was always densely covered with crocks. The potters from Thrapasano travelled all over the island to provide the inhabitants with pottery products.

This festival is celebrated every summer, begins on the day of Saint Marina and lasts three days. In addition to the usual music and dancing, you will see the production of pottery by local craftsmen. In some cases, you can also test your skills in making these products. Do not forget to try the Cretan dish Delicius, slowly cooked in a clay pot.

You can see an article about this town in our issue № 12, 2017: archive of our digest http://thenewcrete.ru/?loc=Archive

The venue is the Fortezza of Rethymno

Since 2009 this festival has been organized by the Municipality of Rethymnon in the spirit of the Renaissance. Performances in medieval costumes, all around is stylized in the spirit of that era, everything supports the holiday atmosphere. The main site of the festival will be at the streets of the Old town and at the Theatre of the Fortezza. There will be street performances, concerts, exhibitions, plays, pantomimes and film screenings. The whole city is decorated with flags and saturated with the atmosphere of the Renaissance.

The Fest of the Prophet Elijah

It is celebrated in Sougia (Municipality of Chania).

The Greeks celebrate the 42nd anniversary of the fall of the “black colonels” dictatorship and the return of Democracy.

It’s held near the ancient highland village of Anogia located on the slope of the mountain Psiloritis. The Yakinthia festival is a cultural event that combines theatrical plays, concerts and poetry readings. Guests can hear the magical music of lyre and many other traditional Cretan instruments. The event takes place under the shadow of the trees in a stone theatre next to a temple in honor of St. Yakinth at an altitude of 4 130 ft. The festival has various themes and, as a rule, connects Cretan music and local folk traditions with musical traditions from other parts of Greece, and the Mediterranean.

The background of the festival creates a legend, telling about Hyacinth, a beautiful youth and lover of the sun god Apollo. God of the winds Zephyr also loved the young Hyacinth. Obsessed by jealousy, he snatched the sun disk out of Apollo’s hands and struck with it the young man; and fragrant flowers grew at places where it was spilled the blood of the beautiful Hyacinth.

During the fest, the village of Anogia is everywhere decorated with flowers. All residents go to the streets with meals and drinks, arrange picnics and dancing.

You can read an article about this village in our issue № 6, 2016: see the archive http://thenewcrete.ru/?loc=Archive.

It takes place in the villages of Fournes (Chania), Adele and Chromomonastiri (Rethymnon), in Archanes (Heraklion), Kalo Chorio and in the city of Ierapetra (Lasithi).

It attracts thousands of people and carefully preserves local traditions of producing high-quality dairy products as well as traditional folk customs connected with the life and activities of cattle-breeders living in the Psiloritis Mountains. In 2011 the festival was marked by the fixation of a new Guinness record: the local farmers cooked a cheese with a weight of 2 491,22 lbs!

What is Zoniana known for besides the cheese festival? Here live sever mountaineers-shepherds who sometimes put their interests above the interest of the state. For example, in 2007, there was a small war there between the locals and police, using firearms, including Kalashnikov rifles on the side of mountaineers because of cannabis fields cultivated in the mountains. As a result, the conflict was settled, but the policemen still do not favor this area with their presence. At the same time, there are peace and order inside the community. Tourists are not threatened. Moreover, the mountaineers are very hospitable and are ready to get to the stove and to cook special for you one of the hot local cheese dishes because a heated meal should not be served to the guest.

During the festival there are a presentation of a huge kefaloriti cheese and possibilities for getting to know meals of the Cretan cuisine, and its cooking recipes.

You can read an article about the Cretan cheese in our issue № 10, 2017. See the archive of the digest at the site http://thenewcrete.ru/?loc=Archive.

Festival of Wine and Cretan cuisine in Rethymnon

The venue is the Rethymnon embankment.

In 2009 the Cretan wine festival was revived in a completely new, updated format. At the festival, local producers will present their quality products: bottled wine, olive oil, various products from olives and herbs, cheese, etc. The program includes a variety of activities, such as exhibitions, traditional and modern music by local performers, educational and recreational activities for children, seminars and lectures by famous residents of Crete and, of course, wine, and food tastings. A ticket for tasting is needed only for fest during which various performances take place as well as Cretan meals and confectionary are presented. Of course, the Cretan festival is unthinkable without Cretan dances!